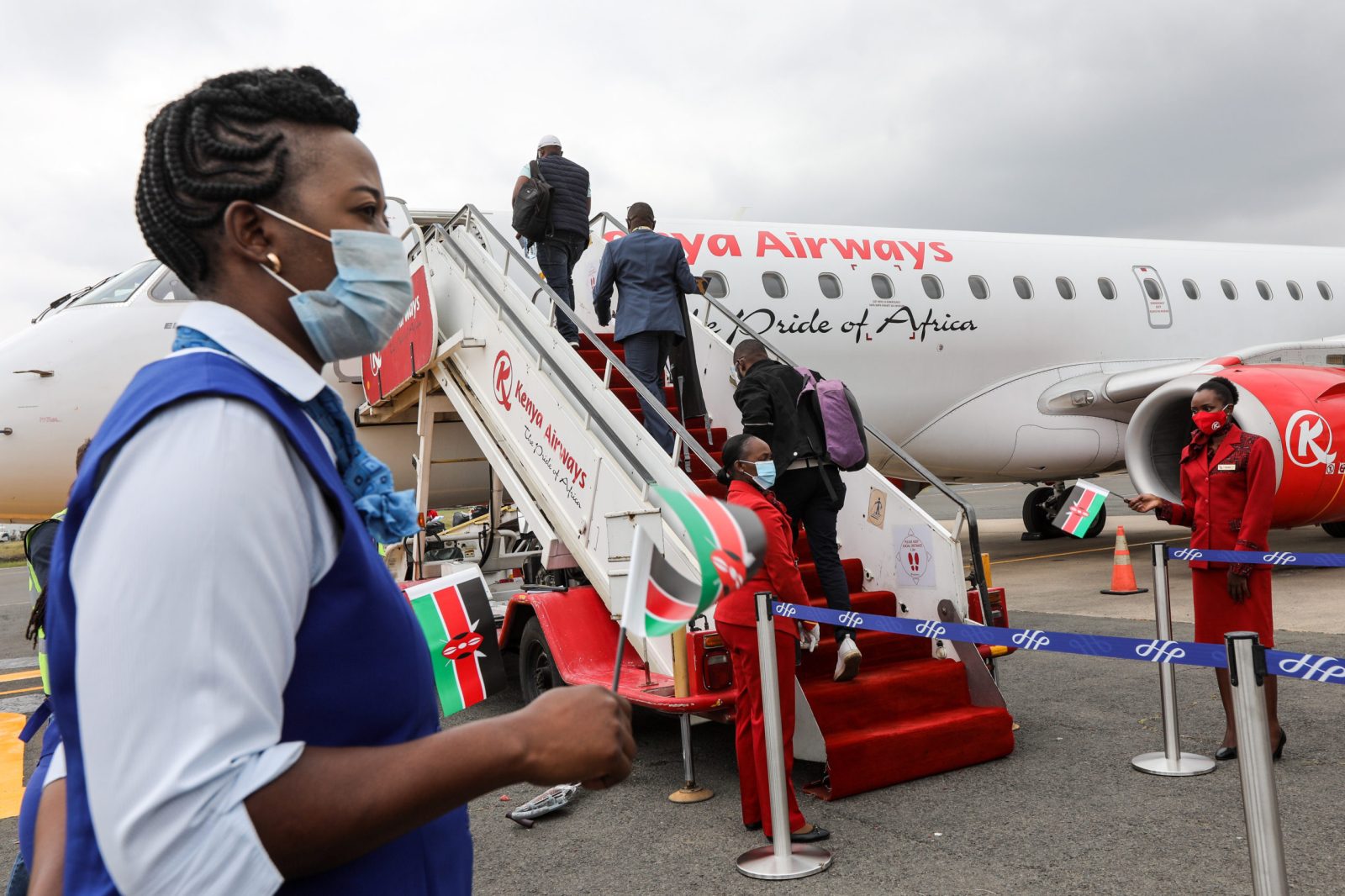 epa08547316 Some of the Kenya Airways cabin crew members (L), waive Kenyan flags as they ushered in passengers during the official launch on resumption of local flights at the Jomo Kenyatta International Airport (JKIA), in Nairobi, Kenya, 15 July 2020. There is a looming fear of an increase of Coronavirus cases as Kenya continues to witness an increase of people traveling across the country after President Uhuru Kenyatta on 6 July announced of the phased reopening of the country, by lifting the internal travel restrictions and the resumption of both local and international flights expected from 15 July and 01 August respectively. EPA-EFE/DANIEL IRUNGU

Kenya's President Uhuru Kenyatta has extended a nightly curfew and banned alcohol sales in restaurants as part of a bid to halt a steep rise in coronavirus cases.

In a stern televised address to the nation on Monday, Kenyatta said a countrywide curfew from 9pm to 4am will remain in place for another 30 days and that “there shall be no sale of alcoholic beverages or drinks in eateries and restaurants” over the same period.

Restaurants are to close by 7pm, the president said, while bars are to remain shut.

The new restrictions came a day after health authorities in Kenya reported the highest single-day jump in infections, logging 960 new confirmed cases on Sunday. The total number of infections in the country has tripled in the past month, rising to 17,975, while the death toll from COVID-19 stands at 285.

In his speech, Kenyatta blamed the rise in cases on “reckless” behaviour and said there was notably an “aggressive surge” among young people who were socialising, “particularly in environments serving alcohol”, and were, in turn, infecting their elders.

“The harsh reality my friends is that we are at war. At war with an invisible enemy who is relentless,” Kenyatta said.

Like many nations in East Africa, Kenya took swift action to combat the coronavirus, closing its borders on March 25 when it had only 25 cases, shutting schools and imposing a curfew while advising people to work from home.

But with the shutdown hitting the poor hard, Kenyatta relaxed restrictions earlier this month, lifting the partial lockdown on two of the country’s largest cities, Nairobi and Mombasa, and announcing the resumption of international flights from August 1.

The nightly curfew had been due to end on August 6 or 7.

The rise in cases prompted speculation that a full lockdown would be imposed, but Kenyatta emphasised on Monday that such a measure was not on the cards because of a need to support the country’s ailing economy.

The country’s growth is projected to slow to 2.5 percent this year from 5.4 percent last year, according to estimates by the finance ministry.

Kenyatta appealed to those economic concerns, warning there will be “little tourism, scarce investment and falling trade if our headlines start to match those of countries that have been hardest hit by the pandemic”.

He also told Kenyans not to be lulled into a sense of “false comfort” by the country’s relatively low fatality rate of 1.6 percent.

“Let us not think that we are immune or special; we are not. Please, fellow Kenyans, let us not follow the examples we have seen across the world,” he added.

Kenyatta said that, among other measures, the health ministry would be authorised to convert government amenities such as schools and sports facilities into quarantine and isolation centres if needed.

He also asked police to enforce the curfew rule regardless of who they found breaking it, without mentioning anyone by name.

Last week, the head of the senate committee overseeing the government’s response to the coronavirus crisis quit his post after police said he flouted an overnight curfew to enjoy drinks with others in a Nairobi bar.

He was later charged and fined.

“All the measures … shall be applied to all citizens regardless of their social or political standing,” Kenyatta said.