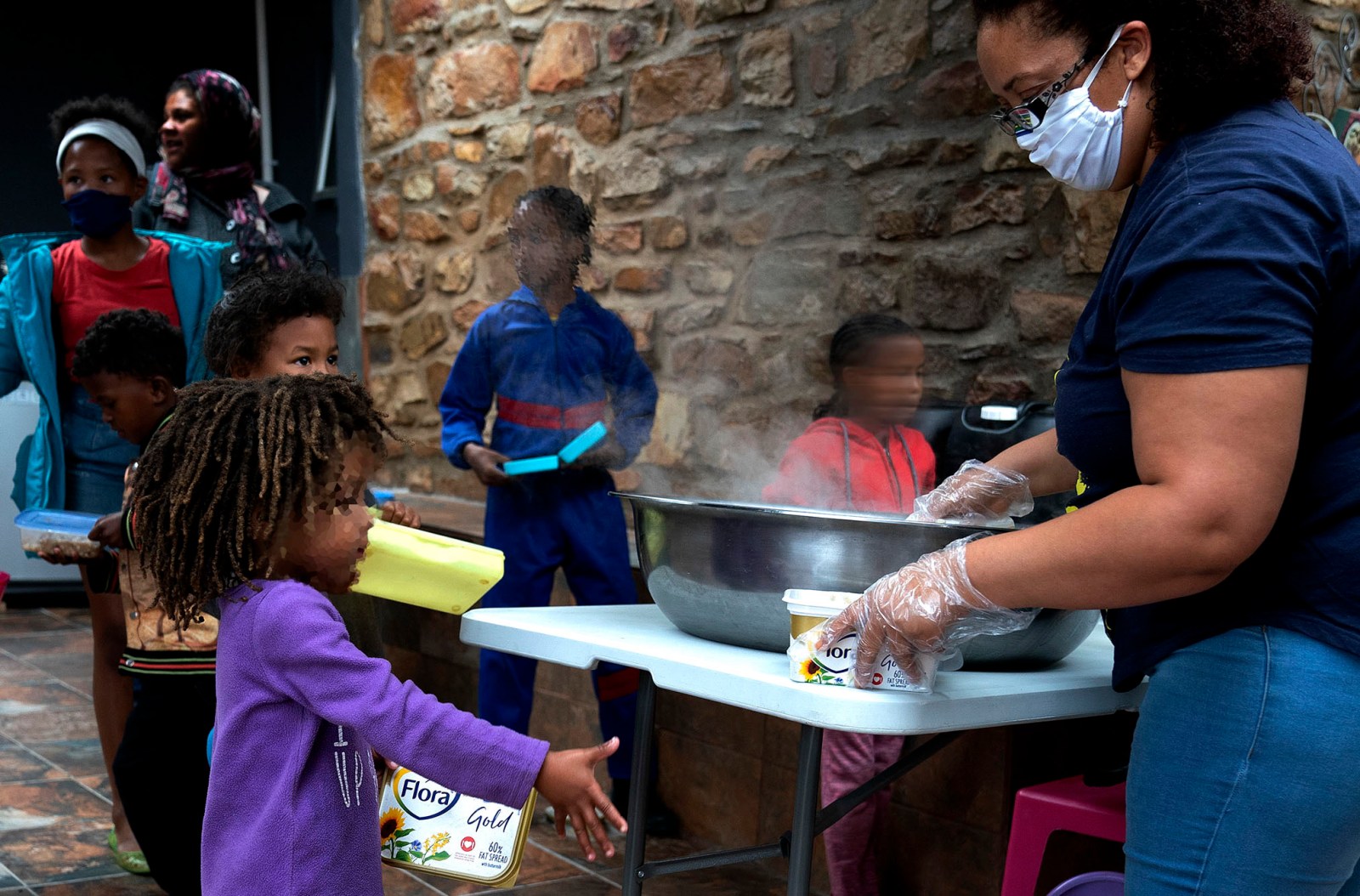 The huge community response to the Covid-19 pandemic seems destined, in next year’s local elections, to disrupt traditional politics and public institutions that serve only themselves and the wealthy, and see the rest of us as annoying and incapable, say the writers.(Photo: EPA-EFE / Nic Bothma)

Volunteers from Gugulethu and other parts of Cape Town are stepping in to do the work of incompetent or absent government officials. Hopes are that when municipal elections are held next year, communities will come together to hold these absent officials accountable.

Perhaps not since the height of the HIV/Aids pandemic have there been so many health-related deaths in the country. In Gugulethu, funerals are being held on weekdays because weekend schedules are full. Meanwhile, the national government has to be taken to court to fulfil its constitutional duty to resume school nutrition programmes, while militarised forces are sent by the City of Cape Town to demolish homes in Khayelitsha and violently end peaceful protests.

On 24 March 2020, three days before the hard lockdown began, our work together on the unemployed movement, Organising for Work (OfW), shifted abruptly to the self-organising neighbourhood initiative, Cape Town Together (CTT). Prior to lockdown, OfW operated in libraries in high-unemployment areas around Cape Town, where jobless volunteers helped others to find work.

The Atlantic Seaboard community action network quickly formed a solidarity partnership with the Gugulethu community action network shortly after its launch. Many more neighbourhoods subsequently formed solidarity partnerships – often across the financial divide – both organically and with OfW playing a role in encouraging and supporting them in the early stages.

Today, the Gugulethu CAN comprises 99 residents who are working hard to monitor needs and to respond on a street level through 33 ‘street champions’.

It supports 29 soup kitchens which feed 3,000 children and 1,400 adults every day. It has a team of five people who run virus awareness campaigns, another 12 who teach backyard farming methods, and six teachers who help to educate children unable to attend school right now.

The CAN volunteers running 29 soup kitchens are up at 06:00 every day to prepare and serve thousands of children abandoned by the school feeding scheme. They also feed senior citizens who are unable to stand in long queues. The CANs are fortunate to have many donors who continue to provide funding, including from within the local community, but their resources are limited and dwindling.

Gugulethu’s effort, assisted particularly by its solidarity partnership with the Atlantic Seaboard, is helping to meet some of the needs in Gugulethu. One wonders, though, what the pandemic response might have looked like if local government operated along the lines of self-organising neighbourhood networks. And what if the provincial and national governments were responsive to people’s needs at the local level?

One wonders, too, why CAN members should not be paid for taking on work that is the responsibility of well-paid city councillors, MECs and other public servants.

As it happens, 75 of the Gugulethu CAN’s 99 devoted hard-working team members are unemployed and desperately in need of money to afford the very basics. They have volunteered to help others for the past four months and still have no income.

OfW has attempted to get recognition for the work the Gugulethu CAN and others are doing from the City of Cape Town’s expanded public works programme (EPWP).

Sadly, despite informing the head of the programme, Salome Sekgonyana, of the scale of the community response – and the hours so many are working for no pay – she gave no indication that she appreciated or even understood the value of their efforts. She insisted simply that community responders must “go to their nearest sub-council office and fill in a job seekers form to be … randomised when EPWP opportunities arise”.

Why has the City created only 500 pandemic-related EPWP positions – and those only since June? Why, at the end of May, and anticipating our worst unemployment figures on record, did the City finalise its budget with a target of only 1,000 EPWP jobs for 2020/21 – jobs that pay a paltry R11 per hour and only last for three months?

Most egregiously, how could it approve a budget that keeps R4.6-billion as surplus this year, R6.2-billion next year and R5.4-billion the year after, at a time when people cannot afford to buy food, and while so much investment is needed to improve lives and create jobs in the city?

The CAN volunteers running 29 soup kitchens are up at 06:00 every day to prepare and serve thousands of children abandoned by the school feeding scheme. They also feed senior citizens who are unable to stand in long queues. The CANs are fortunate to have many donors who continue to provide funding, including from within the local community, but their resources are limited and dwindling.

While it won’t solve the spiralling hunger, one can only hope that the Department of Basic Education complies quickly with the recent court order forcing it to resume feeding all nine million schoolchildren in the country. The Western Cape has operated a supplementary school feeding scheme larger than in other provinces, but it has provided only a fraction of the meals that would have been received if school feeding had remained in place.

There are six teachers in the community action networks who work alongside several other women helping to look after the educational needs of 50 children. They give instruction, allocate them homework and check it the next time the children pass through. Donors have also helped with workbooks, stationery and educational magazines.

There are 21 small-scale farmers in the CAN who attend to communal and backyard gardens. Vuyani Qamata, who heads up this area, has many years’ experience training others in micro-farming.

What our experience over the last four months has made clear to us, and many others like us, is that we are overdue, as communities, to assert greater power and agency over the many uncaring, anti-poor and corrupt officials who govern us in Cape Town.

Since lockdown, his team has revived two community gardens, planted four new backyard gardens and revived a further three. In September or October, they are anticipating a bumper crop which will be showcased at several new local farmers’ markets featuring live music and professional chefs.

Many young members of the CAN, who had previously never volunteered, have found purpose in serving their community. They wake up early to help the soup kitchens and make up 15 of the CAN’s 33 ‘street champions’ who interact and respond at a street level. They deliver food parcels and vouchers and act as emergency contacts for the vulnerable. They have recently been unblocking drains, cleaning streets and renovating a house.

If we are past the first peak of Covid-19 infections in Cape Town, then it seems likely that community efforts through CTT and elsewhere have played the biggest role. For example, the CAN’s awareness group, headed by Nceba Phike, managed to get Gugulethu day hospital to mark physical distancing lines inside and out. Several CANs, including Gugulethu, have also featured on #Coronawise, a radio series which shares stories about Covid-19 on Zibonele, CCFM, Good Hope FM, Smile, Tygerberg and Bush Radio.

One of the hardest things the community networks have tried to do is to convince people that, if they have been in contact with an infected person or tested positive, they must self-isolate. Most people in Gugulethu live in overcrowded homes and fear the conditions at isolation centres outside the area.

The CANs have tried to set up a community-run isolation facility, but a lack of support from government at all levels has made this impossible. How many Gugulethu residents, and residents of other overcrowded parts of Cape Town, would still be alive if more neighbourhoods were given the support to run their own community care centres?

What our experience over the last four months has made clear to us, and many others like us, is that we are overdue, as communities, to assert greater power and agency over the many uncaring, anti-poor and corrupt officials who govern us in Cape Town.

The huge community response to the Covid-19 pandemic seems destined, in next year’s local elections, to disrupt traditional politics and those public institutions that serve only themselves and the wealthy, and see the rest of us as annoying and incapable. DM/MC

Pamela Silwana is a member of the Gugulethu community action network (part of Cape Town Together) and an organiser and activist with the unemployed movement Organising for Work. You can reach her on [email protected] Ayal Belling is a founder of the unemployed movement Organising for Work. He previously worked in finance and tech in London and Cape Town. He can be contacted at [email protected].

They are unaffiliated to any political party.