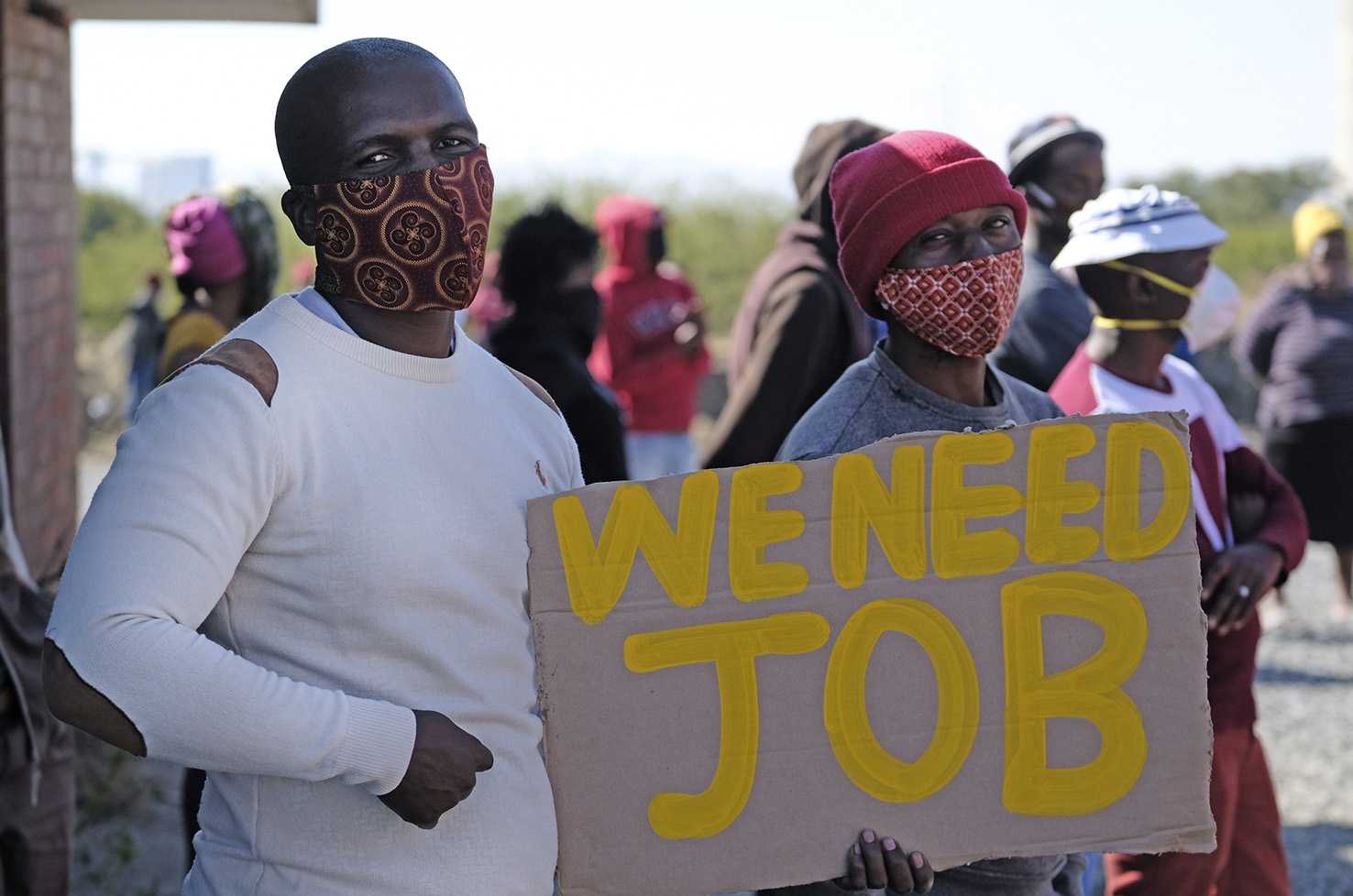 RUSTENBURG SOUTH AFRICA - MAY 18, 2020. Protesters display a placard near the Seraleng mining community on May 18, 2020, in Rustenburg, South Africa. Seraleng residents gathered at Sibanye k5 mine shaft Communities in the area alleged complaints of food parcel corruption by a local ward councillor. Grievances also included concerns with unemployment, loss of business and access to a social labour plan. (Photo by Gallo Images/Dino Lloyd)

We now know that a full two years into Cyril Ramaphosa’s presidency, South Africa entered lockdown with an unemployment rate of 30.1% – its worst on record. The poor and unemployed in the country have always been asked to bear the heaviest burden of our various crises – the AIDS pandemic, gender-based violence, broken education, racism and other ills. The Covid-19 crisis is no different.

In an article earlier in 2020, commenting on the previous quarter’s unemployment figures, I highlighted two ways in which those in power could respond to the voices and experiences of the unemployed, including the members of our unemployed movement, Organising for Work. They involved alleviating the cost and burden of the search for existing jobs and unlocking entrepreneurship by recognising and supporting the informal sector while rolling out a developmental build programme. The impact and scale of the current crisis on employment has made addressing these as well as a further expansion of grants even more urgent.

The numbers out today tell us that, at 30.1%, unemployment from January to March 2020 in the lead-up to lockdown was the worst on record. Only 16.4 million of the 38.9 million in the working age (15 to 64) had work in the period. Despite the continuing alarm over the persistently high and rising unemployment rate, it is job losses due to the lockdown during the second quarter of this year, from April to June, that almost everyone is most worried about.

Dondo Mogajane, Director-General of National Treasury, told the audience blithely on a Zoom at the end of April that depending on how long the lockdown lasted, between three and seven million fewer South Africans would be working in its aftermath.

Even for a National Treasury whose excessive austerity over the last 26 years has aided and abetted our growing inequality and the continued immiseration and worklessness of the population, this was a stunning prediction. It would reduce the number of employed to between nine and 13 million.

Treasury seems to have belatedly realised this, or perhaps was instructed to run new models, because it later revised the presentation, predicting that “only” 690,000 to 1.79 million full-time equivalent jobs would be lost. Their original prediction, the bullet points suggested, came about from their failing to account for furloughs and reduced shift lengths, both of which would help to retain jobs. Even if these numbers are a more accurate prediction, it is anyone’s guess though what the loss in full-time equivalent jobs means for the unemployment rate.

As it is, we may not have good data for some time on the domestic and international impact of the pandemic on job losses in the country. That’s because fieldworkers for Statistics South Africa (Stats SA) who conduct the Labour Force Survey in person at 30,000 households each quarter were pulled from the field on 19 March as South Africa prepared for the hard lockdown.

In May, Stats SA resumed surveys with computer-assisted telephone interviews. It is unclear how rigorous and unbiased the data produced by this new system will be. Respondents will have to answer a phone call and then persist through a lengthy questionnaire over the phone. Many South Africans change their number frequently because their phone is stolen and others may not answer calls from unidentified numbers because of the high level of spam and scams.

We might, though, have been given some advance sense of the job losses from another small non-representative survey that Stats SA conducted between 29 April and 6 May.

The survey looked at the impact on income and employment six weeks into lockdown and was available only on Stats SA’s website, requiring the 2,688 respondents to have data. As such, it was skewed towards the employed and wealthier respondents. It suggested that one in 10 of those employed before the lockdown were no longer employed. If that turns out to be the case, unemployment may now be sitting at around 37%.

Government has compensated for only a fraction of this lost income with relief for six months in the form of grant increases across the board. It is also rolling out the new Covid-19 Special Social Relief of Distress grant of R350 per month for six months.

At least 10 million people who are not working and have no other grant, unemployment insurance or student income are eligible for this new grant.

Even though the unemployment grant is a tiny and insufficient sum, it remains largely unpaid.

By 18 June, Sassa had approved only 3.2 million applicants and described those it had declined, many of whom form the quarter of the population who cannot afford to buy food, as not “deserving”.

A poll of our members suggests that one third of the grant applicants within our unemployed movement are fully eligible for the unemployment grant, according to Sassa’s criteria. Nevertheless, they have been declined with a message from the agency stating incorrectly and vaguely that they “have income from other sources”.

Payment of the grant started in earnest only over the last two weeks and Sassa claimed in its 18 June statement to have paid over a third of the approved applicants. Among our members who have not yet been declined, only one in six has received the grant. None has received a second payment for June, causing anxiety that the delays in processing applications will mean receiving only five or fewer of the six promised payments.

The unemployed are organising

In Cape Town in March 2020, a week before the lockdown started, self-organising community action networks (CANs) started to spring up across the city under the banner of Cape Town Together. The goal was to care for one another and keep people safe during the pandemic – through the lockdown and beyond. There are currently 140 neighbourhoods self-organising in this way.

Along with the unemployed across the city, many of the 2,000 unemployed members of Organising for Work got wholeheartedly behind the neighbourhood organising effort and our volunteers set up and are leading five CANs – in Gugulethu, Nyanga, and three in Khayelitsha.

The unemployed members of our movement proceeded to play a decisive role in forming solidarity partnerships between many neighbourhoods in Cape Town across the physical, social and financial divide. Gugulethu partnered with Sea Point, Nyanga with Gardens, Constantia with Site B Khayelitsha, Tamboerskloof with Zwelitsha Khayelitsha, Harare Khayelitsha with Durbanville and many more.

Combining local and partner CAN resources, new soup kitchens opened and existing ones were restored to feed children abandoned by school-feeding schemes; street and block champions were appointed and activated to penetrate deeper into communities to reach the most vulnerable, and collaboration with existing structures flourished, as has local participation in the crisis response across the board.

Two years into his presidency, and now three months into the pandemic, President Cyril Ramaphosa is still delivering promises no one believes and weak palliatives to the grotesque inequality and suffering the poor were already experiencing when he took office – now dramatically intensified.

He has started referring to “a massive infrastructure build and maintenance programme” and “a massive employment drive that will involve resetting our public employment initiatives”. However, surely only the self-congratulatory staff in the Presidency who write his speeches can believe a word of it.

Or perhaps not even them. They know only too well that just R200-billion of the touted R500-billion is actual stimulus and that capacity does not currently exist within the state to deliver ambitious programmes.

The massive change required is to Ramaphosa’s “social compacts”. They must start to mean less bowing to incompetent, corrupt, paternalistic ministers and more listening to civil society and the unemployed. DM/MC

Ayal Belling is a founder of the unemployed movement, Organising for Work. He previously worked in finance and tech in London and Cape Town. He can be contacted at [email protected]