How low can you go? The ANC’s never-ending race to the bottom 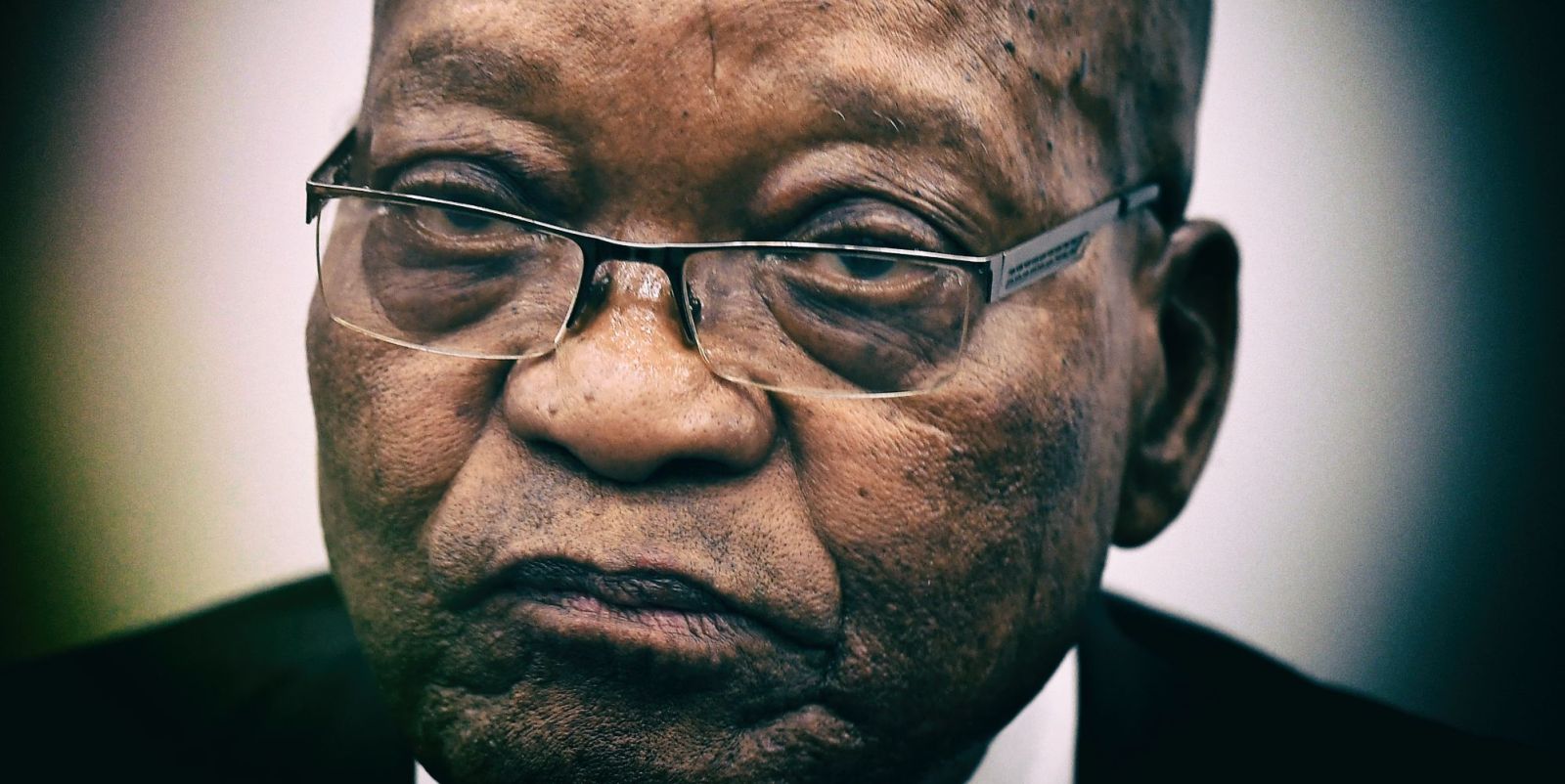 The promise, made by Cyril Ramaphosa on Thursday night that corruption during Covid-19 will not be tolerated, fell flat. Frankly, not many believe the president or his organisation. Especially when the president’s promise is followed within less than 24 hours by the sight of Jacob Zuma paying tribute to Andrew Mlangeni.

The decision to allow former president Jacob Zuma to lead tributes to the Rivonia Treason Trialist Andrew Mlangeni has led to howls of outrage by many in the ANC, and derision among the great majority of its opponents.

At the same time, there is increasing evidence of corruption relating to the provision of services and goods (including face masks and blankets) during the time of the pandemic. It seems likely that this type of corruption, the piling evidence, and the national outrage, will only repeat itself in the coming days.

The choice of Zuma for the Mlangeni tribute and the new wave of corruption are closely related ­– one is but a symptom of the other. Underpinning it all is the lack of consequences for those implicated in corruption, mismanagement and gigantic incompetence, as well as what now appears to be a near-total failure to act by the Hawks and the National Prosecuting Authority (NPA).

In the days after the fiasco, it has been difficult to pin down who exactly decided that Zuma should lead the tributes to Mlangeni on Friday. It is true that Mlangeni and Zuma were on Robben Island at the same time. But it is also true that Mlangeni had publicly criticised Zuma for the damage he caused to the ANC. As one organisation representing veterans of the ANC put it, while Mlangeni had served time with Zuma on Robben Island, he believed the former president should be sent back there.

Certainly, there is enough evidence of the lack of central authority in the ANC at the moment, and a comprehensive destruction of the movement’s original moral fibre.

The ANC chair, Energy Minister Gwede Mantashe, was discharged from a (public) hospital after suffering from Covid-19. Deputy President David Mabuza is unable to answer questions in Parliament (even by a Zoom call) for unspecified, but rumoured as serious, health reasons. The president, Cyril Ramaphosa, is obviously occupied. This appears to leave the ANC secretary-general, Ace Magashule, free to make many decisions. Maybe he played a leading role in wheeling Zuma back in, maybe he didn’t. But it seems entirely natural that this move served his agenda: to remind people that Zuma still has support in the party, that he has been wrongly treated, just in time for his trial.

The ANC (and we are fully aware of the somewhat ridiculous nature of using this term in such a way, as it assumes there was a unified voice that represents the party, or at least its leadership – alas) has also tried to spin back what happened, particularly in the light of the serious objections from some of its prominent members. (City Press reported on Sunday that the Mlangeni family did not at first object to Zuma’s name being included in the programme, but did lodge an objection later. The paper says the ANC felt it would be disrespectful to Zuma to cancel him at the last minute and so decided to go ahead.)

When the streaming feed started on Friday afternoon, Zuma could clearly be seen waiting to speak. However, for a few brief moments, the feed was hacked and what can only be described as a pornographic moving image was visible. Eventually, Zuma was able to speak, and the event continued as scheduled.

It is not known who was responsible for the hacking. But, given the tensions within the party, it is entirely possible that the sabotage was from within.

But this is just a symbol of the greater problems facing the party, and which now confront our entire nation.

In any political scenario, it would seem dangerous for a political party to arrange for a former leader facing corruption charges in court, against whom so much evidence has been published over the decades, to lead tributes for someone who is so venerated by so much of our society. Particularly when that person has specifically spoken out against Zuma.

And yet, those who did this clearly presume that there will be no electoral cost.

It is the same logic that has led to the ANC’s National Executive Committee reinstating the Limpopo leaders Danny Msiza and Florence Radzilani to their positions despite their (alleged…) involvement in the VBS scandal.

Again, this is despite the party’s own resolutions, taken at the 2017 national conference, for this kind of incident not to happen.

Driving this must be the presumption that there will be no electoral cost for this, or any other kind of action (or inaction). And also the fact that the balance of power in the ANC is swinging away from those who claim to be fighting corruption brought upon South Africa during the Zuma years.

This may also be driving what appears to be a Covid-19 procurement feeding frenzy. There is growing evidence that people are making money from the government out of the pandemic. The Special Investigating Unit is probing 90 firms that won contracts in Gauteng, and it appears that many of these companies had no involvement with the health sector before the coronavirus struck our shores. This raises serious questions about how and why this happened.

It should not be forgotten how precarious the political situation in Gauteng is; the ANC there had claimed many times to be trying to be a different ANC to the ANC of Zuma. Gauteng Premier David Makhura has been touted as the kind of leader who could take over the party one day because he has not been implicated in corruption. And the party only retained the province in last year’s elections by three percentage points.

There is now an almost universally accepted understanding that people close to the ANC are making money while many are suffering and dying because of a lack of proper equipment at hospitals, millions more are close to starving because of the economic cost of the lockdown, and children will pay a price for years to come because they are not at school.

In the middle of this is the ANC’s track record with corruption. Incidents in which people have faced consequences for corrupt acts are vanishingly few, as the auditor-general reminds us every year when the results of the municipality audits are announced.

It is in this context that promises by Ramaphosa on Thursday night, that corruption during this time will not be tolerated, fell flat. Frankly, not many believe him, or his organisation. Especially when they are followed within less than 24 hours by the sight of Zuma paying tribute to Andrew Mlangeni.

It now appears that any attempt to clean up the ANC may simply result in a circular firing squad: the corruption is so deeply entrenched and appears to involve so many people, no matter which faction they belong to. This, again, shines the spotlight on the NPA’s failure to deliver on its mandate. While it may be unfair to blame one person in the figure of Shamila Batohi, the fact is that she leads an institution that has not yet charged anyone for corruption during the “State Capture era” despite the voluminous evidence against them that is in the public domain.

It is this failure that allows someone like Faith Muthambi to chair a meeting in Parliament about corruption in Eastern Cape when she should rather be made to answer charges. Many others enjoy the fruits of this confusion – the list is becoming way too long for South Africa to manage.

It is also the failure of the Hawks and the NPA to bring charges against Msiza and Radzilani that allowed them to be reinstated.

The coronavirus is shining a harsh light on many aspects of our society, including our deeply racialised inequality and the lack of delivery in almost every part of our society. It is performing the same function with corruption, and it is a horrible sight. The real tragedy, however, is that it is also hollowing out the state right before our eyes, perhaps never to be trusted again. DM