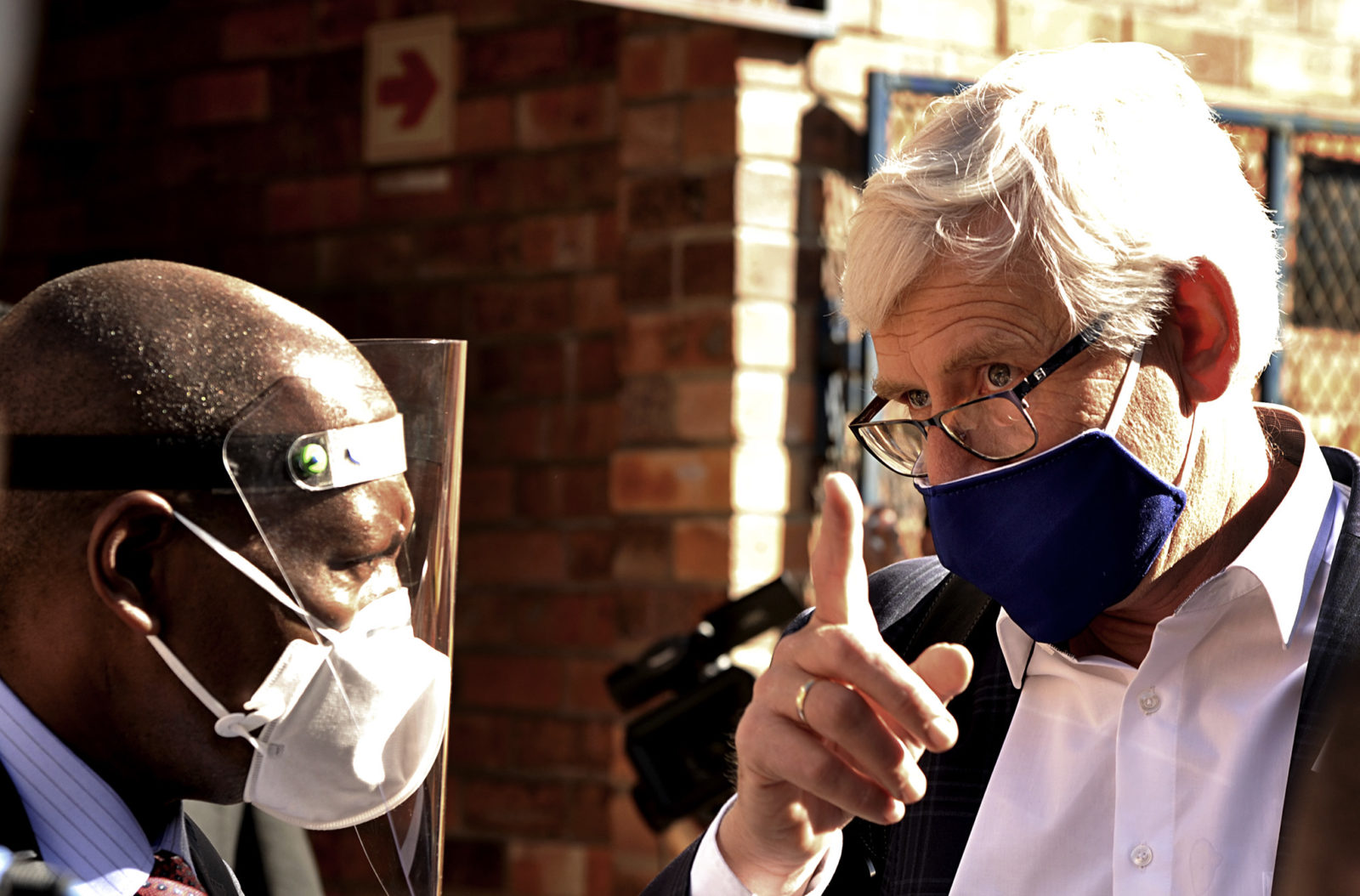 Nine thousand “unavoidable” coronavirus deaths are projected for Eastern Cape, but this figure could be higher if the province fails to urgently acquire more critical care beds.

This was said on Wednesday 22 July by Professor Ian Sanne, a member of the team of experts sent by the minister of health to support the Eastern Cape Department of Health.

He said Eastern Cape was contributing about 17% of the country’s cases.

“The metros still make up the majority of cases. We are concerned that the more remote districts are substantively affected. Our planning interventions are including a scaling-up of activities in all of the districts.”

He said that according to a breakdown of Eastern Cape data by the National Modelling Consortium, around 55% of patients who test positive for the coronavirus will not need hospitalisation.

He said it is predicted that the province will have 90,000 cases when infections surge in August, and to cope with this 5,418 general beds will be needed. On Tuesday there were 66,739 reported cases in the province, according to the health department.

Sanne said most districts in the province would cope with this demand, with the only shortage of beds being forecast for the Alfred Nzo district.

“At this point in time there is an anticipated 9,000 deaths in the province. We use a very unfortunate and sad term, but it is the epidemiologic term of ‘unavoidable deaths’. These are deaths that will occur despite intervention and relate to the nature of the disease. However, we are concerned that if we do not increase the [bed] capacity in the Eastern Cape that this number of deaths will exceed 9,000.

“We are seeing the Nelson Mandela Bay metro escalation now in the month of July but have indicated to our provincial colleagues that of bigger concern is the OR Tambo District [covering the Wild Coast with its seat in Mthatha], which will peak with a delay into September. We have translated these peak requirements in medical cases to beds in the province.”

He said if general wards are at 65% capacity in the province, only the Alfred Nzo district (with its seat in Mount Ayliff) will have a shortage of 70 beds.

Sanne added that the capacity that had been built in the province to provide general beds was very important and had to be “operationalised” as soon as possible.

“Where we are concerned is… the significant capacity that needs to be increased, or the so-called surge capacity to meet the demand of the critical care admissions.”

He added that the more remote districts in the province have no critical care bed capacity, high care or registered ICU beds and patients were routinely referred to the metros.

If only 50% of those needing critical care need hospital treatment, “we already have a fairly substantive deficit in critical care beds,” he said.

He said the province would need 1,796 beds and only had 230 critical care beds in the public sector and a total of 410 if public and private resources are combined.

Sanne explained that if construction is authorised to go ahead for new phases of the field hospital in Port Elizabeth, another 320 critical care beds can be added.

“We are likely to need another field hospital facility in the Buffalo City Metro,” he added. This would be for patients who are routinely referred from more rural areas.

Sanne said an urgent and sustainable effort was needed to improve strategic information systems in the province so that hospitals can provide daily updates of hospital admissions, and districts that are being overwhelmed can be identified quickly.

On Tuesday, Eastern Cape Premier Oscar Mabuyane said they were worried about the high fatality rate in the rural areas.

“Our rapid response teams will pay particular attention in the rural districts. The second concern is the fact that most of our fatalities are in the age range of 40 to 80, affecting both men and women. This is the age group that is prone to comorbidities and already in most casualties there is a prevalence of hypertension and diabetes, accounting for 34% and 28.6% respectively.

Presenting her plans for the Livingstone Hospital and Dora Nginza Hospital in the Nelson Mandela Bay metro to the joint meeting, Zungu said they were looking at implementing task shifting to free up “the few nurses that we have”.

“People with these comorbidities should be cautious during this peak period.”

Late last week Mabuyane announced the appointment of a project management unit to steer the health system’s response to the pandemic. This followed recommendations made by a support team that was sent to the province by the Minister of Health, Dr Zweli Mkhize.

In the report of its assessment conducted from 29 June to 10 July, the support team recommended that the provincial government should address coordination between different hospitals in the province and appoint a project manager to fast-track actions.

The support team found that while the two metros in the province, Nelson Mandela Bay and Buffalo City, had the necessary infrastructure, the province should pay attention to the adequate provision of oxygen, equipment, human resources, and medicines as delays in procurement were hampering an adequate response.

The report also highlighted problems in Nelson Mandela Bay’s hospitals, such as Dora Nginza regional hospital, where medical staff were “overwhelmed by the patient demand, lack of infrastructure, equipment and human resources”.

The team said a dedicated action plan should be drawn up to deal with labour relations.

The unit is headed by Dr Sibongile Zungu, and will report weekly to Mabuyane.

Presenting her plans for the Livingstone Hospital and Dora Nginza Hospital in the Nelson Mandela Bay metro to the joint meeting, Zungu said they were looking at implementing task shifting to free up “the few nurses that we have”.

She said to limit the infection risks, “it might not be a good thing to have critical care patients and patients in quarantine at the Port Elizabeth field hospital together.

“We have oxygen there. It is a critical component.”

She said to progress to the next phases of the field hospital they need to consider if they will meet staffing requirements.

Addressing the joint sitting from Nelson Mandela Bay, Mkhize said there were problems in the Eastern Cape but his intervention did not mean the health department had been placed under administration or “taken over” by the national health department.

“Once you increase the number of beds that need oxygen you will need more staff.”

“If the patient needs to be moved to an ICU for ventilation, they will be moved to Livingstone Hospital,” she said.

She said there are currently only five ICU beds at the field hospital.

“We will have over 500 critical care beds in that facility. If we combine that with our capacity at Livingstone Hospital and we support Dora Nginza hospital we should be able to cope with the surge if we have enough staff,” she said.

“We have prepared infrastructure and equipment. The hurdle is to have the staff who are willing to work and have clinical expertise. That is what we are working on at this point.”

She said they were working on a policy directive that will allow senior nursing students, pharmacy students, students in other medical disciplines and students in emergency medical services to assist.

“It will be helpful to have extra hands.”

She said they urgently need to train nurses at clinic level.

“Our EMS officers must also know what to do once a Covid-19 patient is in the vehicle. We need to do an audit of their ventilation equipment and ensure that staff are trained to handle patients with breathing problems.”

She was confident that the province’s hospitals will be able to cope “at the moment”, except for those in Nelson Mandela Bay. There were problems with the labour unions that urgently needed to be addressed.

Addressing the joint sitting from Nelson Mandela Bay, Mkhize said there were problems in the Eastern Cape but his intervention did not mean the health department had been placed under administration or “taken over” by the national health department.

“[Eastern Cape] is no different to the rest of the country. They have lots of challenges, weaknesses and so on, but so does every other part of the country. If there is obstruction, reluctance or an inability then we can start talking about [a takeover.] We are aware of this as a possibility, we are still very far from it.

“Some work has been done. A shortfall needs to be closed.”

He said he had inspected some of the facilities that had been renovated by the Eastern Cape Department of Public Works and was confident that a lot of new beds had been added to the public hospital system.

“We need to move the numbers based on the forecast we are working on.”

He said he was investigating the immediate interventions that were needed and that the department was looking at recruitment agencies to find more staff. DM/MC

Your Vote Counts: Anti-corruption, the Constitution and the case for intraparty democracy

Cape Town transport’s day zero: We are more than just 2% of budget spend