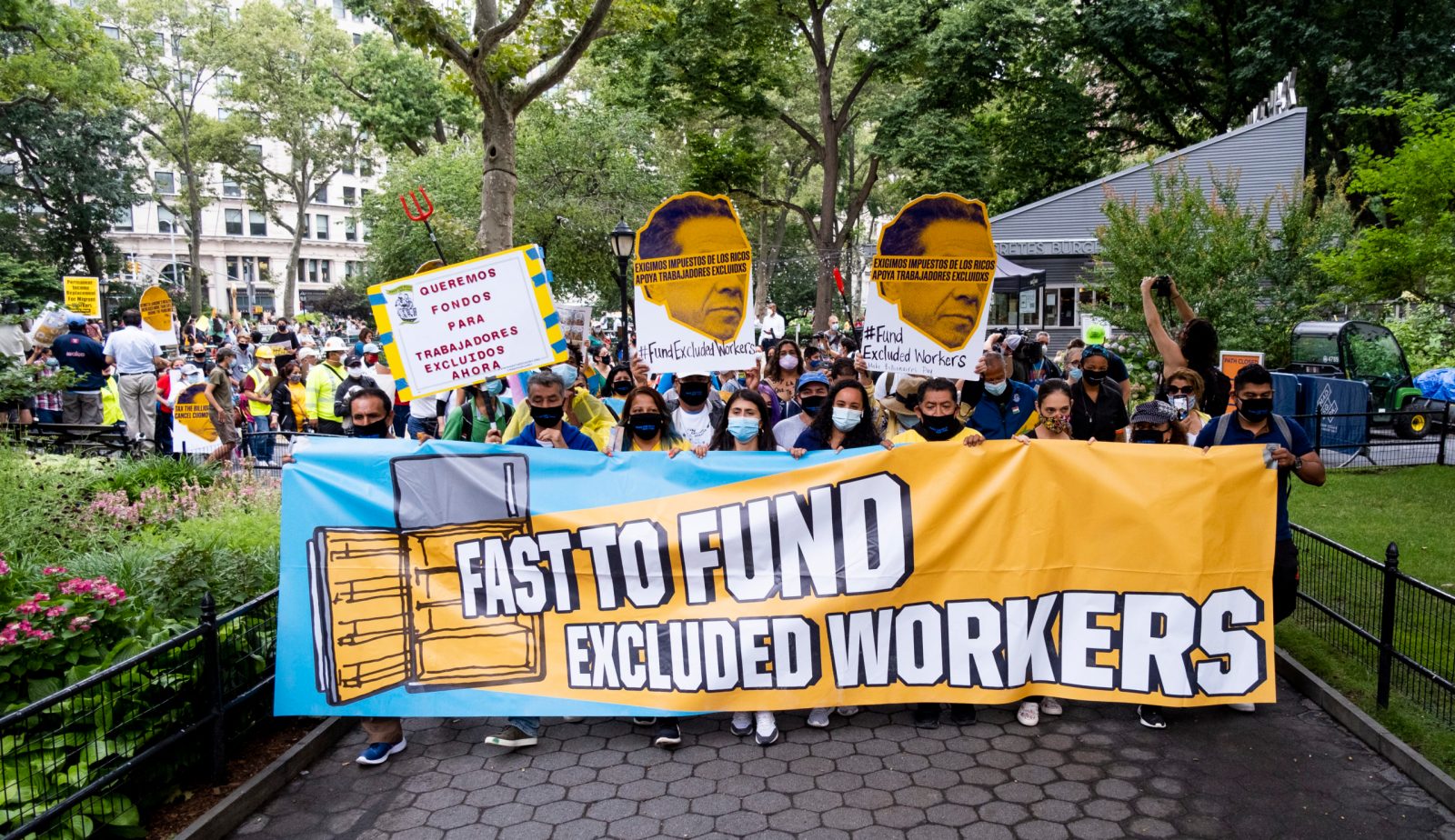 epa08552584 People participate in a protest and march put together by community groups and labor organizations calling on New York State to implement a new tax on billionaires to help supplement income lost by people who are unable to receive unemployment benefits in New York, New York, USA, 17 July 2020. Workers from cash industries including car washers, day laborers, domestic cleaners and undocumented immigrant workers are excluded from the unemployment benefits that many people around the country are getting to off set the economic difficulties caused by the coronavirus pandemic. EPA-EFE/JUSTIN LANE

Introducing a temporary basic income for the world's poorest people will not only give them the means to buy food and medicine, but could also help stop the spread of the coronavirus, the United Nations Development Programme (UNDP) stresses in a new report released on Thursday.

The report, Temporary Basic Income: Protecting Poor and Vulnerable People in Developing Countries, advocates for a time-bound and unconditional cash transfer to serve as a minimum income guarantee for 2.7 billion people living under or near the poverty line in 132 developing countries.

The Temporary Basic Income, or TBI, is estimated to cost from $199bn to $465bn a month depending on how it is structured, and can last nine to 12 months – or longer if needed – as governments get to grips with the coronavirus pandemic that is currently spreading globally at a rate of 1.6 million new cases per week.

“We need to take it up a notch,” George Gray Molina, one of the report’s authors, told Al Jazeera.

Though governments are pouring money into social protection programmes to help people weather the economic fallout of the pandemic, most of the stimulus spending is happening in advanced economies.

Developing countries, which may have already been burdened with political and socioeconomic challenges prior to the pandemic, are ill-equipped to deal with mass unemployment as a result of government-sanctioned lockdowns, UNDP says.

Many workers in developing countries also work in the informal economy and are not captured by official unemployment figures.

According to the International Labour Organization, seven out of 10 workers in developing countries earn a living in the informal economy. Many of them are domestic workers, underpaid and unpaid care workers, and refugees and migrants without access to social safety nets.

UNDP does not propose any additional taxes to fund TBI but rather encourages repurposing existing resources.

For instance, developing and emerging economies are slated to repay $3.1 trillion in debt in 2020 alone, according to the United Nations – payments that could be suspended or forgiven and then rerouted into a TBI.

UN Secretary-General Antonio Guterres has asked for a debt standstill, initially approved by the Group of 20 advanced economies for 73 of the world’s poorest nations, to be extended to all developing countries including middle-income countries and small island developing states. He is also calling for private creditors, such as banks, to honour the debt repayment freeze.

Another potential source of financing could be found by eliminating fossil fuel subsidies, which range at around $500bn a year, UNDP says.

Though some 17 billion people globally are estimated to lack access to formal banking services, UNDP is confident that tech advances in mobile money and digital payment make it easier than ever to get cash directly into people’s hands.

“We see it as a Marshall Plan for people,” Molina says. “It will not mitigate the effects of the GDP drop or loss of the largest economies of the world, but it can focus on individuals and households.”