On Friday, Gauteng had the country’s highest recovery rate from Covid-19 despite being ‘in the storm’. The race is on to distribute oxygen around Eastern Cape and protesters against lockdown clamps on the hospitality and restaurant industries took to the streets for a second day. Meanwhile, the debate about schools closing may be heading to court.

Scroll through the gallery below to view the latest Covid-19 numbers available on 24 July at the district level. All maps are sourced from provincial health departments, however Eastern Cape and Mpumalanga did not provide an update by the time of publishing: 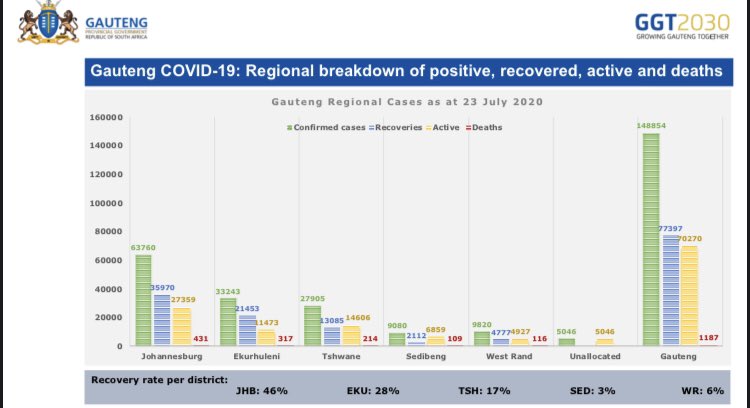 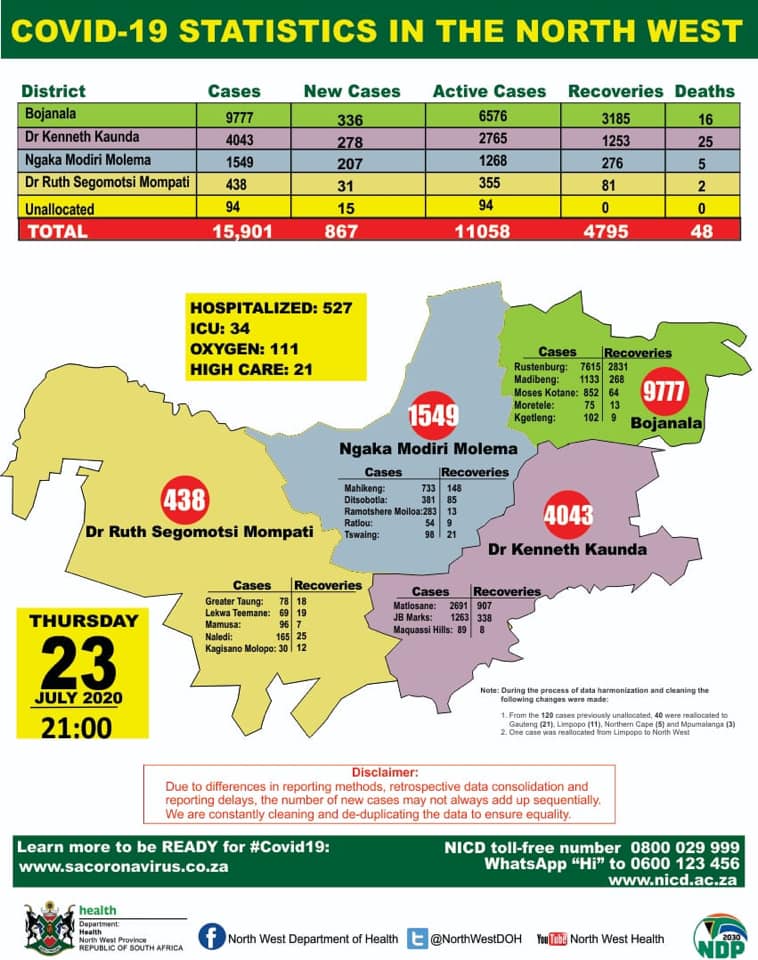 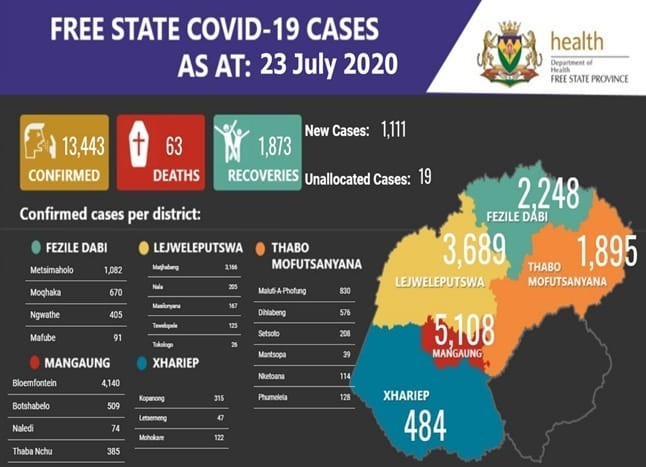 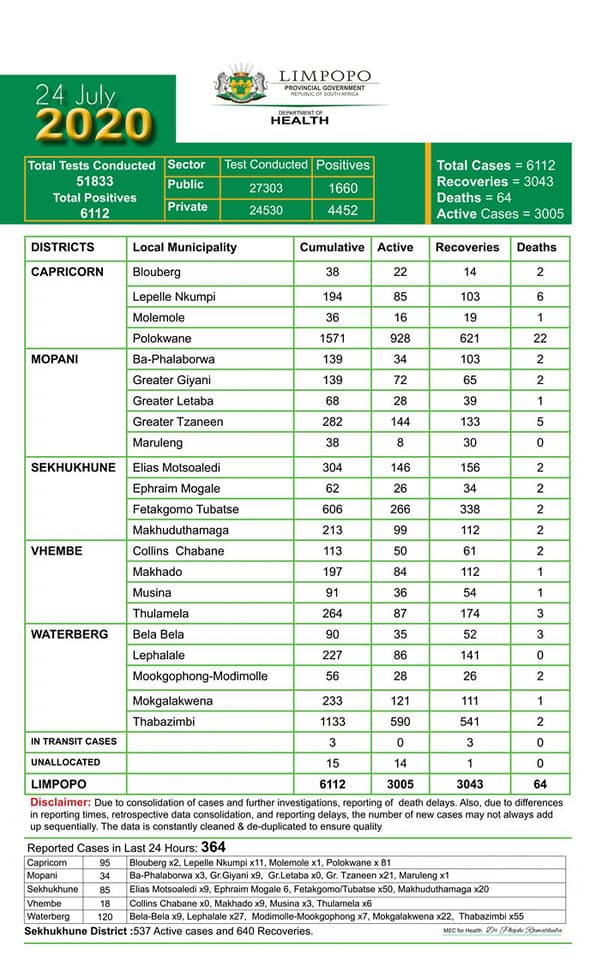 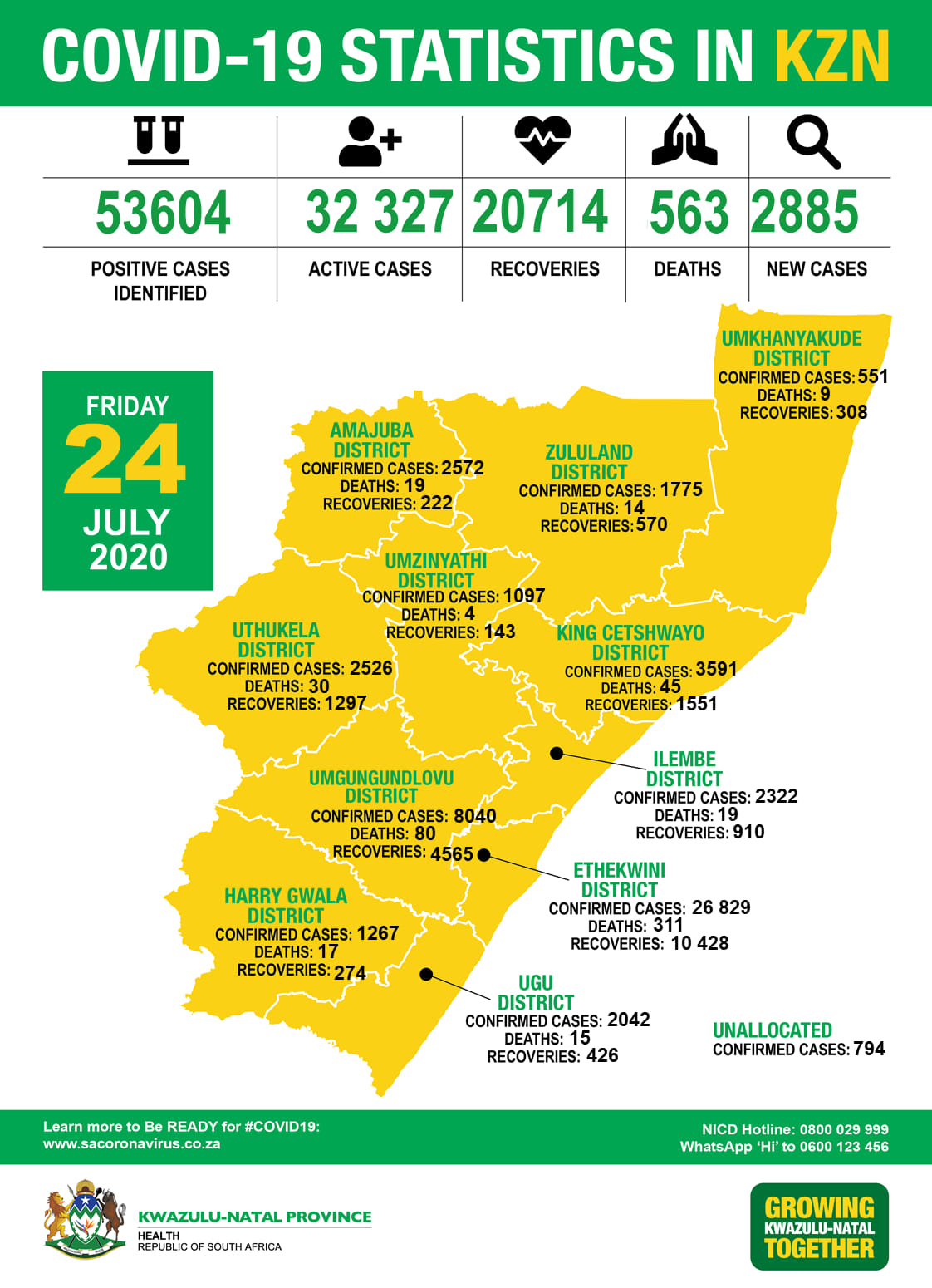 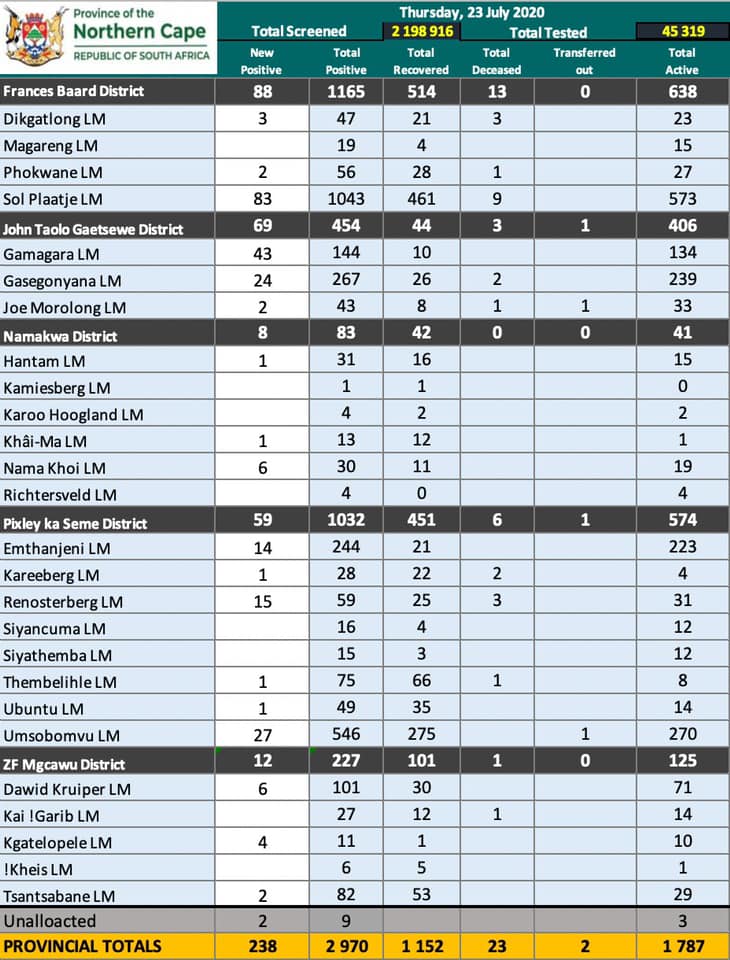 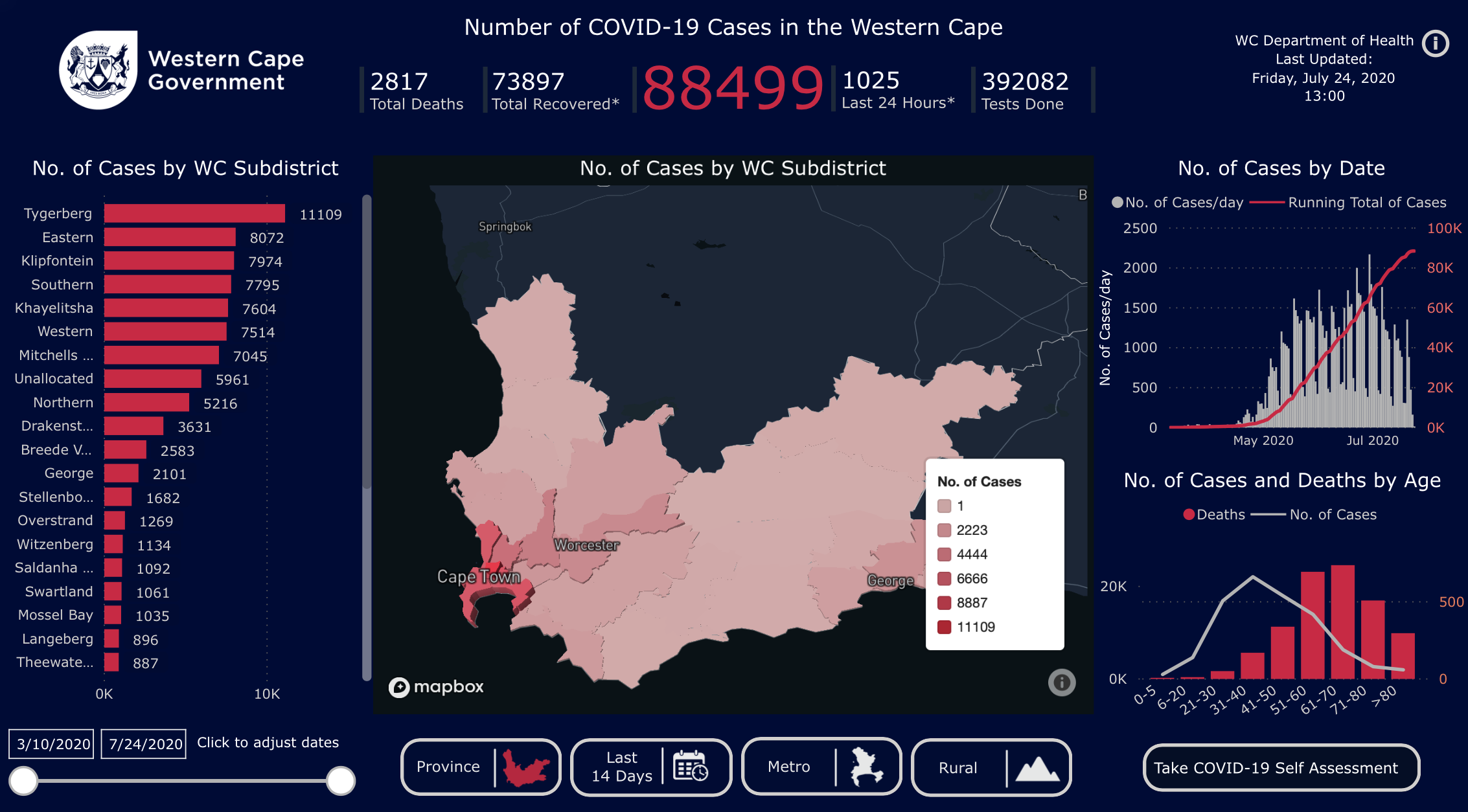 Gauteng now has the country’s highest recovery rate, said MEC for health Bandile Masuku during an update on the province’s response to Covid-19. A third of patients are recovering after being infected. However, he said, “We are now in the middle of the storm”, as the province has 36% of confirmed cases and 42% of active cases. The peak is only expected in late August or early September. As Chanel Retief reports, the province may not have enough beds for Covid-19 patients.

The race is on to distribute oxygen from a main supply in Port Elizabeth to hospitals around Eastern Cape. The demand for oxygen is expected to surge to eight times normal levels during the province’s peak in August and September. Oxygen bulk tanks will need to be restocked each day during the peak. Estelle Ellis unpacks the logistics.

Basic Education Minister Angie Motshekga has welcomed the Cabinet’s decision to close public schools for four weeks from Monday 27 July. Department spokesperson Elijah Mhlanga said this would give schools time to prepare for the return of more grades in August and will decrease the stress of children going to school while infections were rising. Learners and school staff are expected to continue with class as normal. However, Motshekga said: “It is important to bear in mind that the latest opinions of the Ministerial Advisory Committee (MAC), medical and science experts are that learners are better [off] at school than in communities and homes where the infections are actually taking place.”

The South African Federation of Trade Unions welcomed the decision, too. However, it was disappointed that President Cyril Ramaphosa didn’t try to convince the public of the scientific reasoning behind closing schools.

Meanwhile, the DA said it would be “approaching the courts” to reopen schools. It argued that the decision was “politically rather than scientifically motivated” and went against the advice of scientists who argue that there is little reason to close schools. Western Cape Premier Alan Winde echoed his party’s sentiment.

The South African Human Rights Commission also rejected the decision, saying it was “regrettable and unjustified” given how many school days would be lost.

However, most private schools will continue with the 2020 academic year, according to the National Alliance of Independent Schools Association. It said learners needed to catch up on work not done because of the break during Level 5 lockdown. It said Motshekga agreed that independent schools could use their own discretion.

In Cape Town, at least four people were arrested during the #ServeUsPlease protest outside Parliament. About 200 people who work in hospitality and restaurant businesses lined up outside Parliament with placards reading #JobsSaveLives and #ServeUsPlease. Police arrived and told the group the meeting was illegal under the Disaster Management Act. They used water cannons and stun grenades to disperse the crowd when protesters refused to move. Police then patrolled the city centre telling everyone to clear out.

In Johannesburg, about 80 people formed a human chain with placards reading #Iamtourism. They, too, were dispersed by police.

There are more than 400 participants in the South African Ox1Cov-19 Vaccine VIDA-Trial and another 300 who have agreed to be part of the trial. There are three trial sites in Gauteng and more will be rolled out in Western Cape from next week.

Health Minister Zweli Mkhize has downplayed the possible under-reporting of Covid-19 deaths, saying people may have died before getting to hospital, deaths not being recorded properly and deaths due to non-Covid-19 health services being “reoriented” for the pandemic. This comes after the South African Medical Research Council found there were 17,090 “excess” natural deaths between May and July 2020. As Marianne Merten reports, Mkhize urged provinces to improve their reporting of Covid-19 deaths.

Western Cape has “a budget to beat Covid-19” with its just-announced special adjustment budget, according to Western Cape finance MEC David Maynier. The province’s department of health will receive R1.8-billion towards personal protective equipment, temporary field hospitals, testing and screenings. The provincial departments of transport and public works, education, economic development and tourism and social development have also been allocated funds to respond to the Covid-19 pandemic. As Suné Payne reports, an additional R84-million will be spent on humanitarian relief.

The Africa Centres for Disease Control echoed the World Health Organisation’s warning that South Africa’s growing Covid-19 outbreak serves as a red flag for the rest of Africa.

It warned that, as shown in South Africa, the virus spreads quickly once it has a foothold in vulnerable populations. Peter Fabricius unpacks the situation beyond South Africa’s borders. DM/MC