About 11,000 excess deaths pose questions about how people are dying, a new mortality report from the Medical Research Council shows.

This suggests that the numbers of people dying from Covid-19 are higher than official statistics suggest, although the researchers are careful not to attribute all 11,000 additional deaths to the epidemic. And as the epidemic starts to peak across different parts of the country, deaths are accelerating.

By 14 July, the council report says the natural deaths of people older than one year has risen to 14,958 people and was 51% higher than the previous week, showing an excess of 5,022 deaths in the last week.

It is extraordinarily high as the world meter of Covid-19 also shows that in confirmed cases, South Africa has the fifth highest tally in the world.  There are, of course, many caveats to this statistic, but Worldometer is widely used to compare across countries.

At the same time, a GCIS briefing leaked by FITA, the independent tobacco manufacturer associations, has revealed that government is considering a lengthened alcohol and tobacco ban. On 12 July, the government suggested the renewed booze ban would be in place for about eight weeks while government spokesman Jackson Mthembu said the cigarette sales ban is likely to be lifted at Level 2.

The document suggests a ban until the end of the lockdown which has been extended to August 15 but which is likely to be extended month by month until the country is classified post-peak and pre-vaccine. This could go on until the end of the year as the experience across the world is that countries are going into second waves of epidemic outbreaks and many are re-imposing lockdown restrictions.

On 22 July, the government’s main Twitter account retracted as “erroneous” a tweet which said the alcohol and booze bans would last to the end of lockdown but the briefing document shows that may well be the case.

The death report is likely to support those in Cabinet pushing for an almost indefinite ban.

More mortal than we thought

Until now, South Africa’s case fatality rate has suggested that while our numbers of infections are high, deaths had been perceived to be low because we are a country of largely young people.

But the MRC’s careful report, done in collaboration with the UCT’s Centre for Actuarial Research, has cast a new light and included analysis that extended beyond the institution’s weekly report on deaths in South Africa, which includes natural and unnatural deaths.

“In the past weeks, the numbers have shown a relentless increase – by the second week of July, there were 59% more deaths from natural causes than would have been expected on historical data. It also means that reported deaths have shown a pattern that is completely different to those indicated by historical trends,” says the MRC report. Excess deaths are those deaths that exceed the expected mortality trends established through the national weekly monitoring of deaths.

Prof Debbie Bradshaw, who co-authored the report, said the timing and geographic patterns of the report leaves no room to question whether this is associated with Covid-19.

“The weekly deaths report has revealed a huge discrepancy between the country’s confirmed Covid-19 deaths and the number of excess natural deaths,” said Bradshaw. 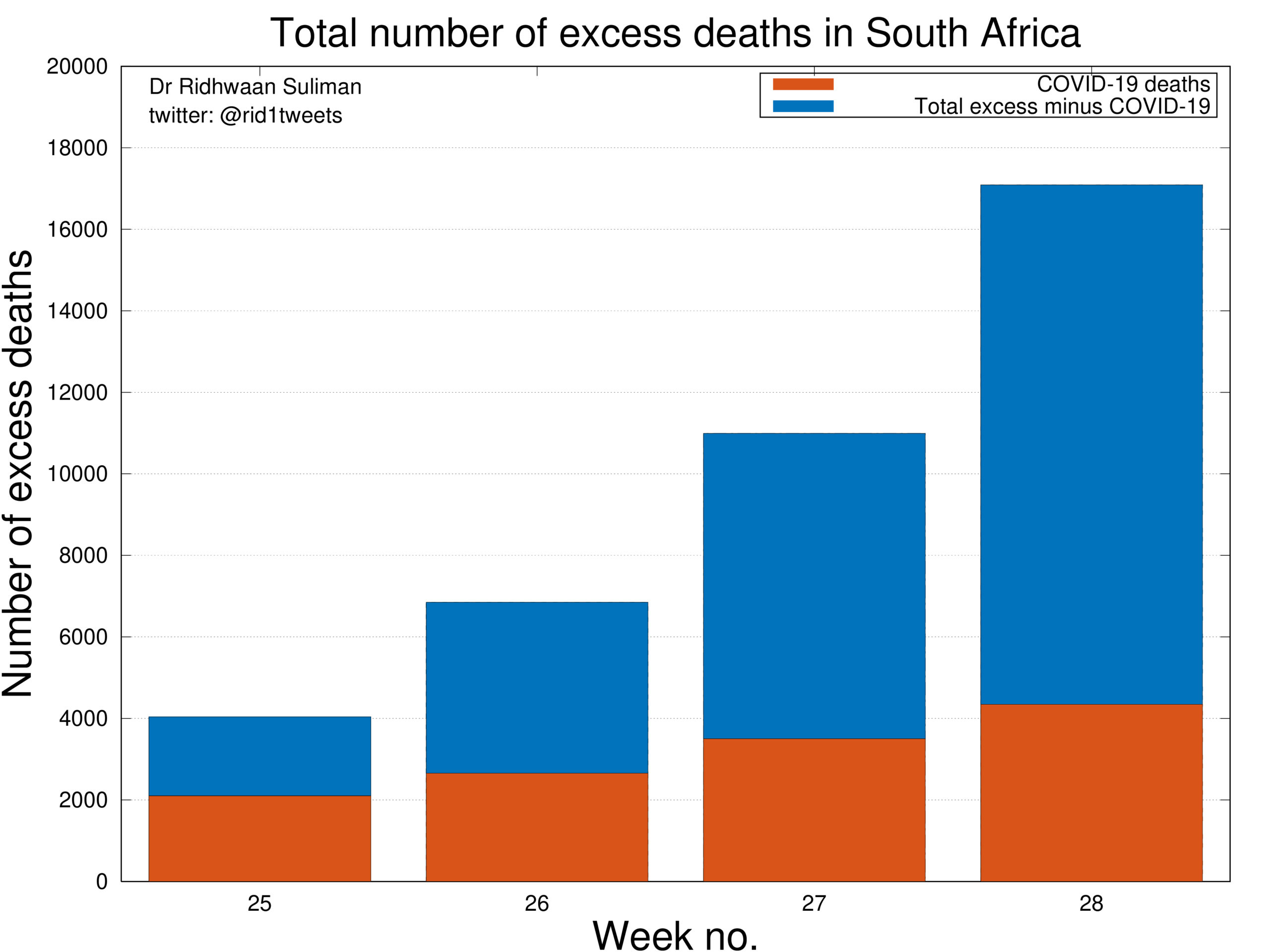 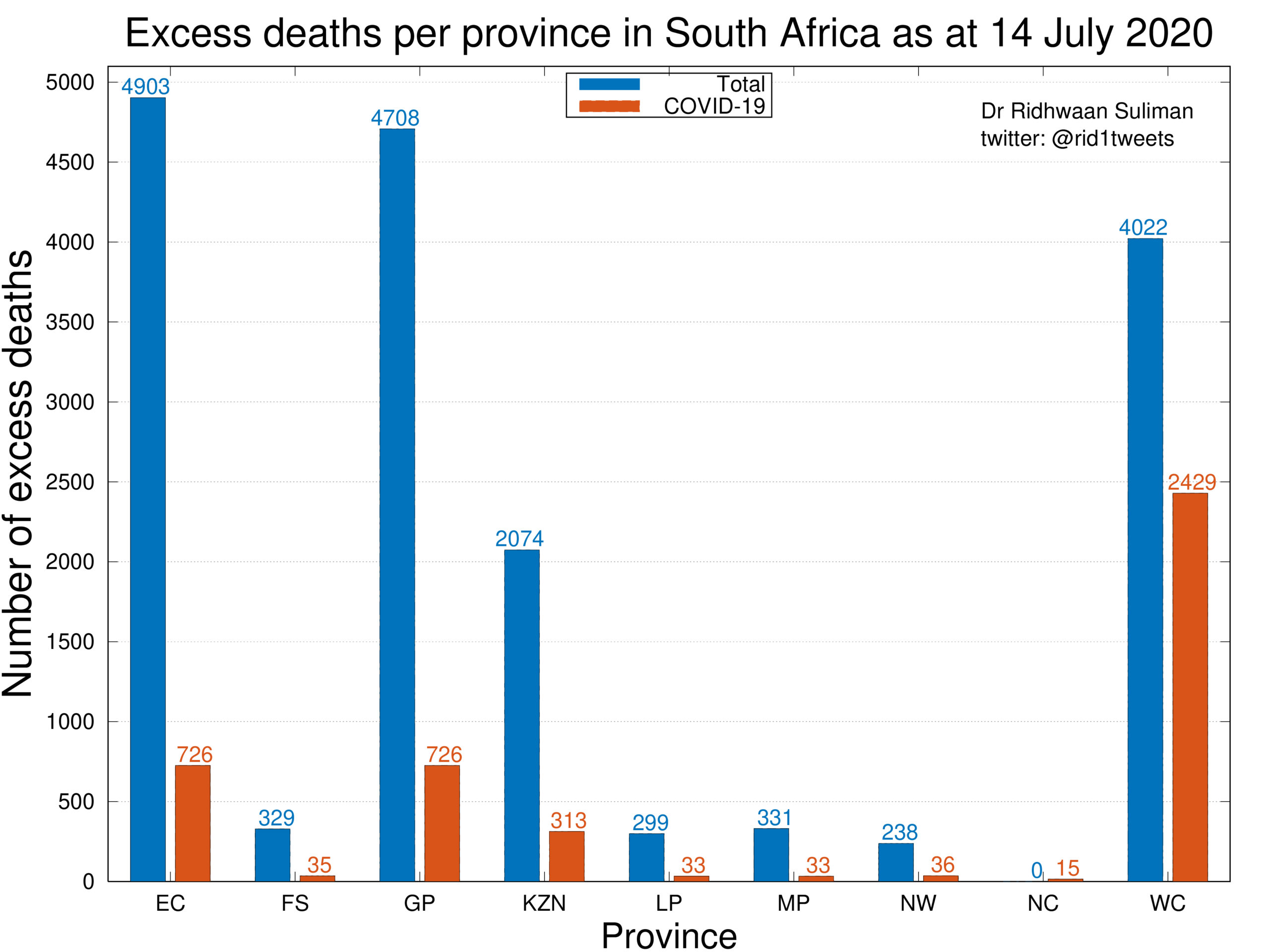 Graphs show the official Covid-19 death records issued daily by government versus the new tracking by the MRC.

Many countries have been tracking excess death numbers to take a snapshot of the impacts of Covid-19. In the UK, for example, such tracking revealed that the official statistics were not capturing the epidemic’s true grim reaper. “It was realised that the confirmed Covid-19 deaths reflected only the deaths that occurred in health services and those deaths that occurred in long-term care institutions and at home were not included.”

Back home, the tracking by the MRC and Bradshaw’s team was more complex as our system of death registration is different and less current.

This gets a bit tricky to read, but it is important to understand: “To quantify the impact of the Covid-19 epidemic on South African deaths, it was decided to focus on deaths from natural causes and remove the impact of changes in the unnatural deaths (accidents, traumas through violence, etc). The team also thought it would be necessary to consider that the lockdown had reduced the number of natural deaths.”

So, what we see in the report is the rapid increase in natural deaths tracked in the National Population register triangulated with known Covid-19 deaths to reveal an increase in excess of those.  “The proportion is calculated such that the excess deaths in that week is equal to the confirmed number of Covid-19 deaths for that week. The cumulative number of excess deaths comprises the sum of the weekly excess plus the cumulative number of confirmed deaths prior to the establishment of a clear upward trend.”

The lockdown depressed unnatural deaths as this graph shows and this was 20% down on normal patterns. While the accelerating and excess Covid-19 deaths are noted largely in metros and cities, the scientists tracking deaths show that Mpumalanga, Free State, Limpopo and North West have also started to experience excess deaths ranging between 238 and 331 deaths noted over the weekly tracking tally.

Back to that lengthened booze and alcohol ban

President Cyril Ramaphosa faced the wrath of the restaurants on 22 July when a restaurant protest went viral and international.

A BBC feature showed restaurants pleading to be allowed to serve drinks with food and for a reduced curfew (South Africans can’t be on the streets after 9pm at night).

Restaurants are closing daily and the hospitality sector, in general, is on its knees.

The document leaked by FITA now reveals that the draconian ban is likely to continue and give elbow strength to Cabinet’s hawks who insist it is necessary to protect hospitals from the additional burden that excessive drinking and smoking put on the health system.

See this piece to show how high the need for hospital beds will be as we hit the peak.

“The government fact sheet which was shared today still purporting that the ban on the sale of alcohol and cigarettes would ‘remain in place through the lockdown’ is the document that informed the erroneous tweet withdrawn by the government. Government fact sheets are internal documents that are not publicly shared. Government reaffirms its position that the prohibition of sale of alcohol and tobacco products remains under the Current Level 3 regulations. This decision may be reviewed by the relevant structures should conditions that necessitated it change,” said GCIS DG Phumla Williams in a statement.

About seven million South Africans smoke and many drink so much and so dangerously that doctors reckon about 40% of trauma unit admissions are alcohol-related. DM