Restaurant workers protest against destruction of their livelihoods 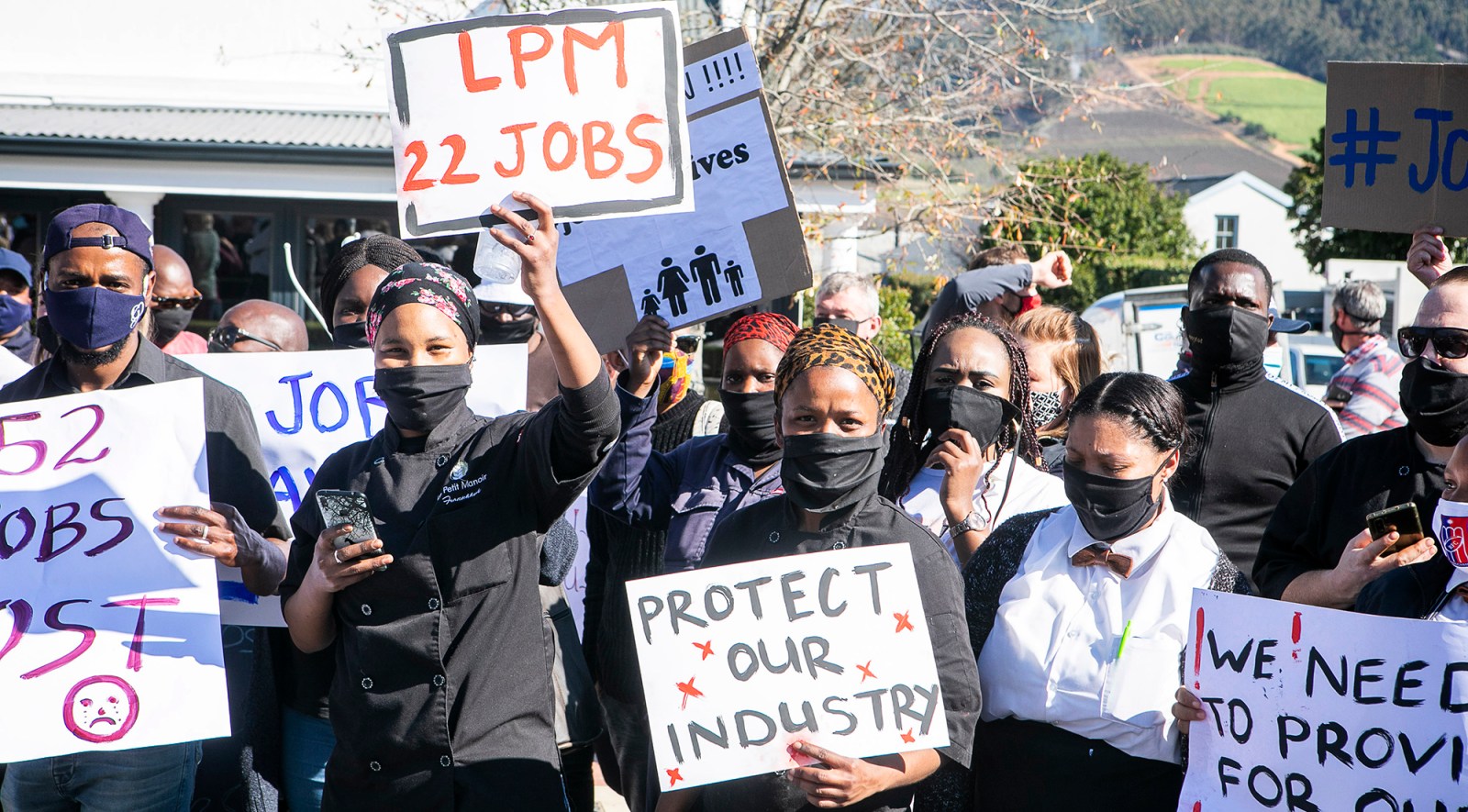 Restaurants in Franschhoek, Western Cape, carried tables and chairs into the street during a peaceful nationwide protest on 22 July against lockdown regulations and to highlight the plight of the industry. (Photo: Gallo Images / Jacques Stander)

The 1 Million Seats On The Streets protest on Wednesday saw thousands of restaurant workers around South Africa peacefully protest against their industry being brought to its knees during the Covid-19 lockdown.

After almost four months of national lockdown, South Africa’s hospitality and restaurant industry has been crippled by not being able to trade fully. The crisis was exacerbated on July 12, when President Cyril Ramaphosa reinstated an immediate ban on alcohol sales, along with a 9pm curfew, directly and indirectly threatening hundreds of thousands of jobs.

On Wednesday, those who work in these industries – many of them former breadwinners now without employment or income – took to the streets around the country to make their voices heard. Demonstrations ranged from noisy and exuberant to small groups in isolated areas, in cities and small towns.

At an hour and a half in, the weary arms holding placards with the #JobsSaveLives – which in the past 10 days has become the catchphrase for the devastation which has been wreaked – suddenly lifted again with a cheer as passing cars hooted their support.

“The restaurant sector was well represented, led by Bertus Basson, chairman of Tasting Stellenbosch and owner of Eike, Overture, Spek en Bone and De Vrije Burger. We saw not only restaurants but wine farms, and guesthouses.

“Even private individuals joined in with masks and ribbons [for social distancing] for the greater cause of supporting the industry, amplifying the narrative that companies and jobs are on the line,” said Rabe.

In Cape Town, Bree Street has become well-known during the past couple of years as an eclectic foodie hub, with restaurants and coffee shops lining both sides of the road from top to bottom, creating a vibrant buzz from morning till late at night. Today, many of them have closed permanently, and time is running out for others.

Guido and Adnana Brambilla have owned Bocca on the corner of Bree and Wale streets for two years. At the moment, they have no staff (21 jobs) and are doing everything themselves, for meal collection and delivery. Their message was conveyed via a lonely chalkboard outside their front door, and they can last about another month if nothing changes. It’s frustrating, said Guido, when there are practical solutions that can be implemented while still remaining safe within the pandemic. His eyes above his mask show his exhaustion, sadness and the threat of defeat.

Spirits were high however, and the atmosphere festive given the circumstances, at the intersection of Bree and Shortmarket streets, where Grub & Vine set up tables outside, and Liam Tomlin from Chefs Warehouse mobilised his staff, who later marched to the top of Bree Street and back, chanting “Jobs Save Lives!” Members of the public joined as reinforcements.

There had been some concern about how the SAPS would react to the protest, having issued a statement that it would be illegal, and some restaurateurs were cautious and even hesitant to go public at all. Earlier in the morning, Wendy Alberts, president of the Restaurant Association of South Africa (RASA) posted this message on Facebook:

“Please be reminded to protest in the confines of the law.

“Please no gatherings or encouraging gatherings in any way. No marching or grouping is allowed by law and please wear masks and maintain social distancing and adhere to strict protocols.

“We have lost so much in these last few months. Let us be careful not to also lose our freedom.

“We urge you to err on the side of caution and simply protest within the confines of the law by standing outside your establishment, placards in hand.

“We do not want a single person arrested by not respecting the law or upsetting the police.

“Where you have been given permission by your landlord or local authority make sure social distancing is being practised.

“Please make sure you protest peacefully at all times and that you are aware of your local SAPS stance. Please stay safe and lawful. We simply want to ensure that our message of desperation is heard WITHOUT incident.”

In Bree Street, there was a strong police presence but apparently without animosity; marchers were escorted in convoy by SAPS vehicles and peace prevailed. Also joining the protest was a flatbed truck on which musicians played, supporting the cause and calling for the unlocking of Section 31 (in which “Religious Institutions may qualify in terms of Section 31 of the Bill of Rights of the Constitution to be recognized as essential service”), an initiative of Good Hope Christian Centre which wants to “reopen its sanctuary”, but stands in solidarity with the restaurants as well as musicians who are out of work as a result of closures.

A fleet of trucks from Kerston Foods circled the perimeter of the main hub of activity, hooting their horns as pedestrians whooped. Not only are restaurants and their employees and customers affected by the lockdown regulations, but the ripple effect extends to suppliers, agriculture, wine farms, even the electrician who comes to fix a light, said Brambilla.

Alex Grahame from SeaBreeze Fish & Shell said he was delighted with the way the protest had played out.

“The police have been wholeheartedly supportive. We made the decision to do this on the side of the street and not block the road. We’ve had everyone out supporting us: our staff – what’s left of them. We’ve had CCID [Central City Improvement District]. We’ve had our suppliers. We’ve even got the car guards, who rely on their income too.”

“We can’t reopen as a sit-down restaurant. It would be commercial suicide to do so. It’s not the experience customers want. I don’t want to sound selfish about it, but when you go out to eat, you want to do it a little bit later. And as an adult, if you want to buy a legal, licensed alcoholic beverage, you should be able to do that.”

It’s hard to see a way back if this ban continues for very much longer, said Grahame.

“This is going to decimate employment, not only in the Western Cape but throughout South Africa.” DM