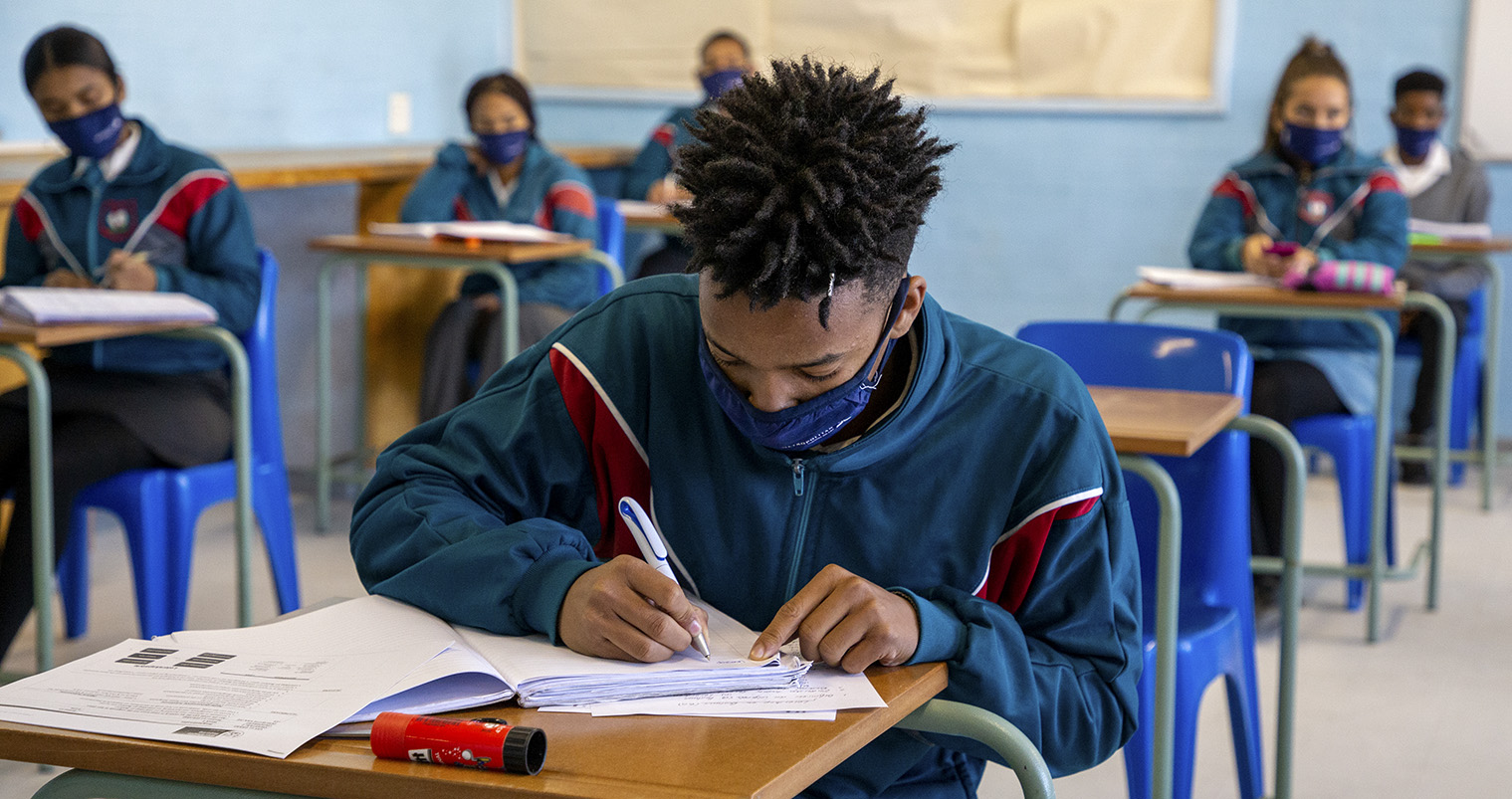 The basic education sector has received no additional funding, and in fact billions of rand are being cut from the sector,says the writer. (Photo: Gallo Images / Roger Sedres)

Austerity is a cruel and destructive economic policy choice at the best of times, but during a global pandemic and economic crisis it is plainly irrational.

On 2 July 2020 Philip Alston published his last report as the United Nations Human Rights Council Special Rapporteur on extreme poverty and human rights (“the Alston report”). The Alston report discusses the state of extreme poverty globally and focuses largely on debunking the myth of meaningful progress in the fight against it.

Notably, the Alston report states that blind reliance on free markets does not lead to prosperity for all, fiscal austerity has impacted negatively on human rights, and that reliance on the private sector to alleviate poverty and extreme inequality is a “blind alley”.

The Alston report was released about a week after Minister of Finance Tito Mboweni delivered the Supplementary Budget – which espouses a commitment to fiscal austerity in order to, according to him, contain the budget deficit and rapidly rising debt.

The Supplementary Budget fails to pay attention to the government’s constitutional obligations to realise socio-economic rights. In terms of such obligations, the government has the duty to progressively realise certain socio-economic rights with available resources. These include the rights to healthcare, adequate housing, food and water and social security. The government must further immediately realise certain unqualified rights such as the right to basic education or the rights of children to basic nutrition, shelter, basic healthcare services and social services in instances where parents and caregivers cannot afford to pay for these services.

All of these rights are ultimately necessary for the realisation of the right to equality and human dignity. Which is to say, as stated by Allison Corkery, when we call something a human right it is because it is so fundamental to a meaningful existence that it must be guaranteed.

Human rights advocates globally and in South Africa have been calling for a principled, rights-based approach to economic policy for decades. Recognising that economic development is not an end in itself, countless guidelines and policy recommendations have been released to guide developing states in utilising economic policy as a means for the progressive realisation of human rights.

For example, the Centre for Economic and Social Rights has published a series on “Covid-19: Recovering Rights”, which highlights concerns and gives recommendations on how the government might proceed in utilising economic policy to fulfil its socio-economic rights obligations. However, it has become increasingly disheartening to witness policymakers worldwide, and in South Africa in particular, turn a blind eye to such work.

On 24 June 2020, amid a global pandemic, Mboweni delivered the Supplementary Budget, which, if adopted, will likely result in a cut of between R400-billion and R600-billion in government spending over the next few years. After Mboweni delivered the Supplementary Budget, a group of 120 economists and academics penned an open letter calling on the Standing Committee on Finance to reject the proposed Budget. The letter notes that there are key reductions in areas necessary for the realisation of socio-economic rights. These include billions cut from money allocated to basic and higher education, as well as agricultural and land reform and rural development.

Such reductions will have long-term effects. Not only does it make very little sense to make budget cuts amid an economic crisis (where fiscal stimulus is necessary), but it will also be disastrous for human rights. It also represents a betrayal of the promise to implement a R500-billion recovery package in order to mitigate the economic effects of the pandemic, which was not enough in the first place.

There were concerns about how the government’s commitment to austerity was affecting socio-economic rights realisation before the Supplementary Budget was delivered, and especially with the onset of the Covid-19 pandemic. For example, with regard to basic education, government expenditure per pupil has been decreasing when accounting for inflation for the past decade. This is despite the state of education in South Africa being far from acceptable, and in many cases conditions in schools being deadly.

With the onset of the pandemic, the basic education sector has received no additional funding, and in fact billions of rand are being cut from the sector. This will have a significant impact on not only the possibility of realising the right to education in South Africa, but also on children’s right to dignity and equality. In a joint statement, SECTION27, Public Service Accountability Monitor, Equal Education and Equal Education Law Centre noted that the huge cuts and reprioritisations being proposed with regard to the Education Infrastructure Grant will have a devastating effect on the ability to implement adequate infrastructure in schools for the medium and long term. Schools are simply already neither safe nor conducive to the realisation of the right to basic education. Funding for infrastructure should be increasing and not being cut or reprioritised.

Poverty is a political choice

In this context, the Alston report is illuminating on a number of fronts. It shows that the picture painted by world leaders, economists and some activists that extreme poverty is close to eradication is false. This is because of misplaced reliance on the World Bank’s international poverty line, which is not based on any direct assessment of the cost of necessities and is below the national poverty lines of the majority of states. The line is highly unambitious and represents a standard of living “…well below any reasonable conception of a life with dignity”.

Alston notes that the promise that the liberalisation of the economy and blind commitment to economic growth would benefit the poor, has never materialised. The pro-market policies and structural reforms that for so long have been sold to the public as necessary for prosperity have, in fact, been linked to reduced access to healthcare, worse labour conditions, higher rates of neonatal mortality and weaker labour rights. The effects of austerity, privatisation and deregulation of industries disproportionately hurt the poorest in society.

Importantly, the Alston report states that the existence of extreme global poverty is ultimately a political choice.

The Alston report highlights what human rights advocates in South Africa have argued for years – that the government simply asserting it has insufficient resources for social spending is inadequate where socio-economic rights and equality redress are at stake. The Alston report states that governments that assert there are inadequate resources to eliminate poverty are entirely unconvincing where funds can be raised by those governments if they enact equitable tax policies, end tax evasion and combat corruption.

If the South African government wants to take socio-economic rights seriously, as is its duty, then it must reject austerity. Not only would the adoption of the Supplementary Budget be plainly bad economic policy, a self-imposed structural adjustment programme, it would also have a devastating impact on the potential realisation of socio-economic rights in South Africa. Since the government has the legal duty to progressively realise some socio-economic rights using the maximum available resources and in other instances, such as basic education, immediately realise such rights, adopting the Supplementary Budget would likely be in violation of the Constitution as well as a number of international legal instruments including the International Covenant on Economic, Social and Cultural Rights that South Africa has ratified.

It is absurd, in a time where the government has the opportunity to enact real reforms addressing the extreme inequality, poverty, and climate change in South Africa, that it has chosen instead to adopt more austerity. Further, if the government’s overarching concern is debt, perhaps we should be arguing for a debt resolution strategy and reform at credit rating agencies rather than cutting spending necessary for the realisation of socio-economic rights.

Notably, it is likely that austerity will make our chances of solvency and economic growth less likely in the long term. It has been found that the kind of structural adjustment programme we want to impose on ourselves has contributed to increased corruption, inequality, low economic growth, unemployment and political instability.

The only emerging development countering the austerity commitment is the recent announcement by the Minister of Social Development that the government is considering enacting a basic income grant for unemployed South Africans. If implemented, a basic income grant may have the potential to help millions of South Africans and thus would be an important step against poverty.

It is clear that fiscal austerity is neither necessary nor advisable. It will not bring prosperity. The riches accumulated by those at the top will not trickle down, and the Alston report demonstrates this. Austerity is a cruel and destructive economic policy choice at the best of times, but during a global pandemic and economic crisis it is plainly irrational. Even the countries most committed to neoliberal economic policy are spending big.

The poor material conditions so many in South Africa live in are neither an inevitability nor a necessity. The extent of poverty and extreme inequality in South Africa is ultimately a political choice. Austerity will exacerbate the state of inequality and poverty in South Africa even further, possibly to a breaking point. If the Supplementary Budget is adopted, this will be an egregious violation of the socio-economic reform promised in the Constitution. We must reject it. DM/MC

Mila Harding is a legal researcher in the Education Rights programme at SECTION27. Harding holds a Bachelor of Arts in Politics, International Relations and Law and is currently completing the final year of her LLB at the University of the Witwatersrand.