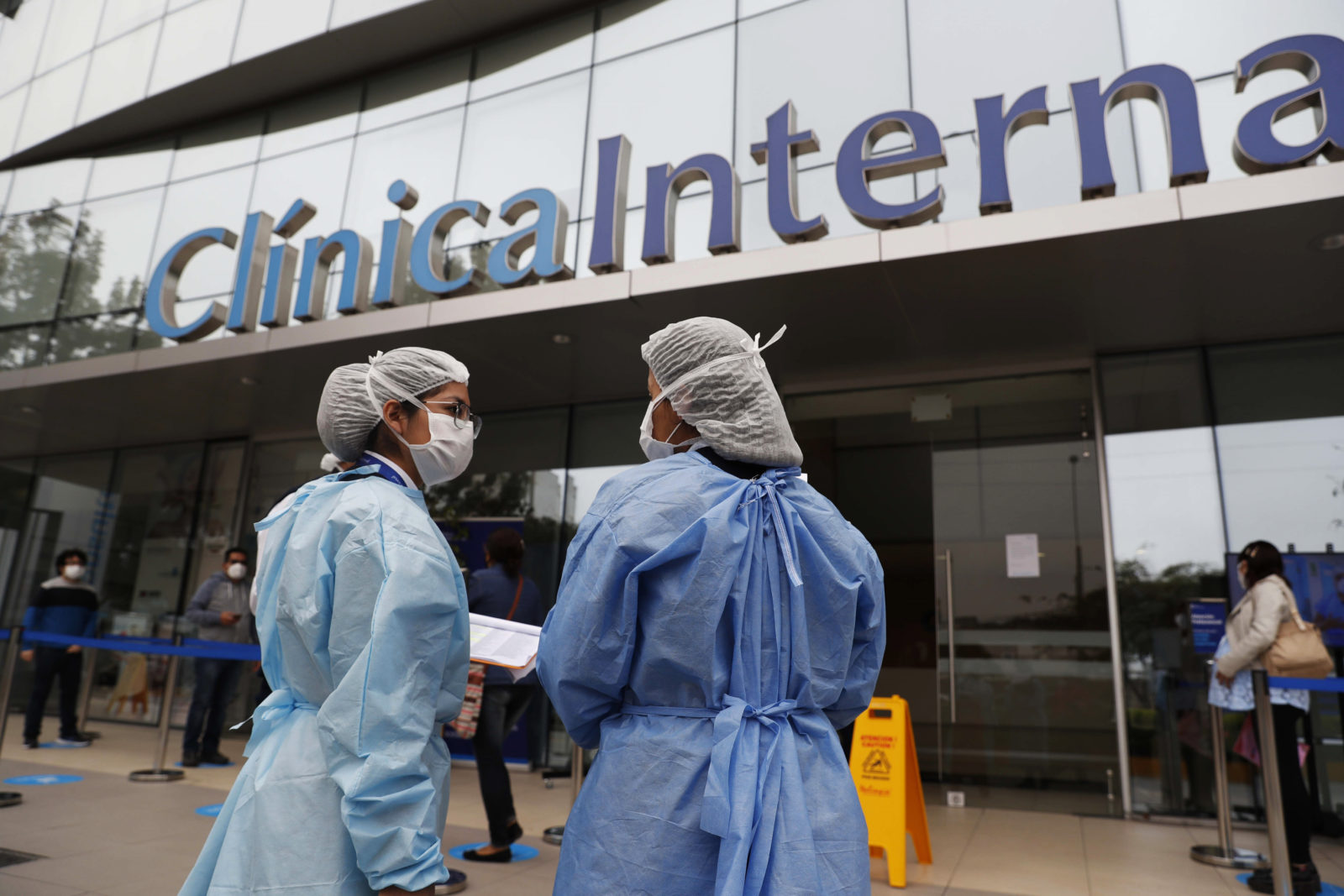 epa08509648 Health personnel stand outside of a private clinic after the last-minute agreement reached between the Government and private clinics to reduce health care prices during the pandemic, in Lima, Peru, 25 June 2020. On Wednesday, President Martin Vizcarra had threatened to expropriate the clinics if they did not reduce their excessive fees. This happened after the population reacted with outrage to the prices that private clinics were charging to care for coronavirus patients and their refusal to agree with the Executive on a price for taking care of patients derived from a public health service on the verge of collapse. EPA-EFE/Paolo Aguilar

LIMA, June 25 (Reuters) - The Peruvian government on Thursday said it had struck an agreement with the country's private health clinics on the cost of COVID-19 care after President Martin Vizcarra warned on Wednesday they would be expropriated within 48 hours if negotiations did not progress.

The clinics had for three weeks wrangled with Vizcarra’s government over a fair rate for care. The haggling began amid reports of overcharging for the sickest patients, who require mechanical ventilators and intensive care.

The health minister, Victor Zamora, said the agreement was finalized on Wednesday evening after a meeting with representatives of the Association of Private Clinics of Peru.

Peru’s coronavirus outbreak is second only to Brazil’s in Latin America, with 264,689 confirmed cases and 8,586 deaths. The pandemic has caused a deep economic crisis in the Andean country and brought its health system to the brink of collapse.

Centrist President Vizcarra issued the ultimatum to temporarily expropriate private clinics, invoking an article in the Peruvian constitution on the use of private property in case of national public need.

Minister Zamora said on Thursday that a flat rate of 55,000 soles ($15,580) had been agreed for the care of a COVID-19 patient. The agreement will be signed on Friday, he added.

The government had previously proposed paying up to $1,003 per day for care, and the clinics were asking around $1,308, according to Health Ministry sources.

Peru was one of the first in Latin America to impose, in mid-March, a quarantine to try to stop the pandemic, but since May the government has allowed the resumption of productive activity to reactivate the economy. (Reporting by Marco Aquino, writing by Aislinn Laing; editing by Steve Orlofsky)