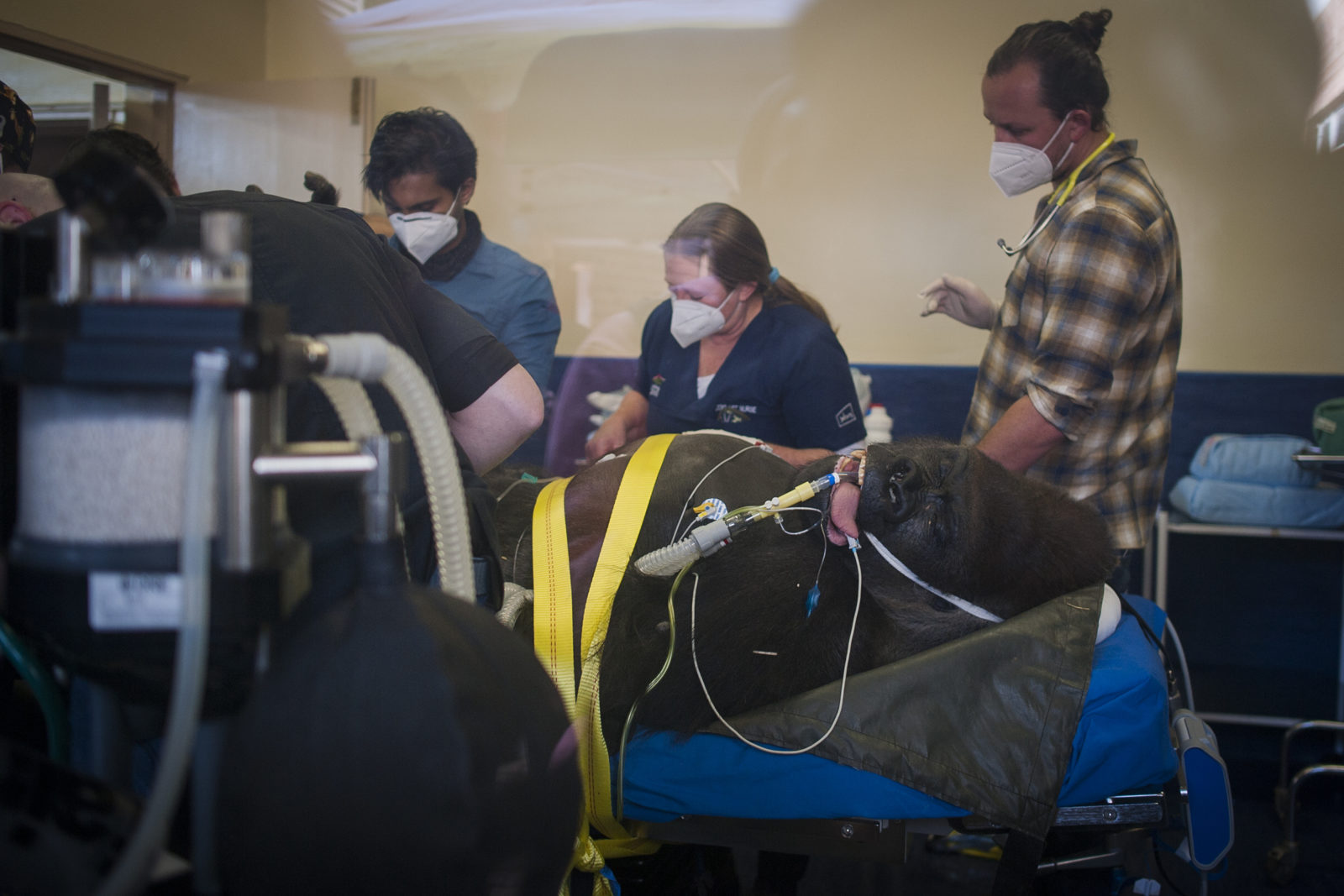 Makokou in the operating theatre for surgery to remove polyps from his nasal passages. (Photo: Shiraaz Mohamed)

Thirty-four-year-old endangered western lowland male gorilla Makokou has had nasal surgery after suffering from rhinitis. Makokou, who turns 35 in July, arrived at the Joburg Zoo from Germany in 2004.

Joburg Zoo’s western lowland gorilla Makokou was airlifted to the Onderstepoort Veterinary Academic Hospital in Pretoria on 6 June for a CT scan. He had previously been suffering from a chronic nasal discharge which had not been responding to routine medical treatments.

The results revealed that he had chronic rhinitis with inflammatory polyps developing in his nasal passages. It was decided that he should undergo nasal surgery.

Extensive research was conducted with the help of several overseas zoos and veterinarians that helped to plan the surgery. The primate was then subjected to subtle changes in his living environment to prepare him for surgery.

The Covid-19 pandemic posed many problems, but the highly specialised team overcame them all. All lockdown regulations were adhered to on the day the operation.

The endoscopic surgery to remove polyps from the primate’s nasal passages took place on 20 June 2020. It was the first of its kind in South Africa and was met with high emotion from Makokou’s keepers.

“I care for the primates, and when any child goes for an operation it’s nerve-wracking for the parent. So obviously I am a little worried about him, but I know he is in very good hands,” said animal curator Katherine Visser.

Makokou was given a tranquilliser in orange juice. His favourite keepers then gave the juice to him. He was not exposed to any unfamiliar faces as there was a threat of overwhelming the primate.

Veterinary surgeon Dr Kresen Pillay darted him with immobilisation drugs before the huge unconscious primate was loaded on the back of a bakkie and taken to the zoo’s veterinary theatre.

The surgery went well and Makokou is recovering.

“Our medical team confirmed that they managed to remove all the growths. However, this might require a further x-ray. Right now he is as well as can be expected after surgery and he was administered with pain medication to help with the discomfort,” said Jenny Moodley, spokesperson for Johannesburg City Parks and Zoo.

“He is doing ok. He was in a bit of pain, but we have tailored a pain control regimen for him. He has taken well to his medication and is taking in lots of fluids — tea, honey and juice. His appetite has also increased and we are keeping him indoors for now,” said Dr Pillay who played an integral part in the surgery as well as the events leading up to it.

“It’s been an intense two months getting the team together. Tell everyone Makokou has already given me more grey hairs than a silverback (referring to a dominant male gorilla having grey or whitish hair on the back). Just glad all is looking good for now.”

Western lowland gorillas are classified as endangered — Makokou is one of only five in the country. DM