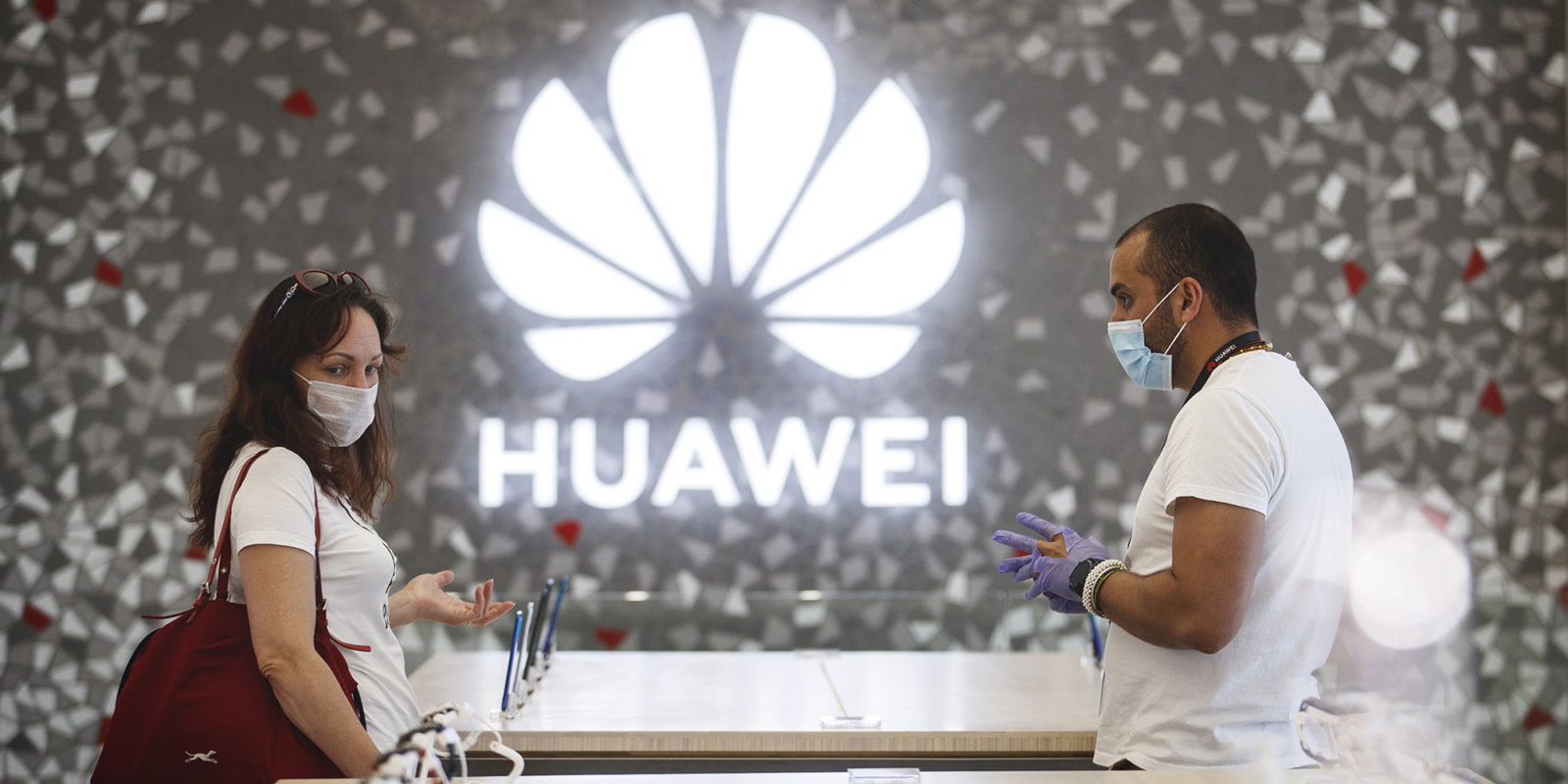 A customer is attended by an employee, both wearing protective masks, in the Huawei store on June 03, 2020 in Barcelona, Spain. (Photo: Xavi Torrent/Getty Images)

The US government has warned South Africa that it is risking the security of its most sensitive information and data by using the 5G telecoms infrastructure of the Chinese telecoms giant Huawei.

The warning comes as the Donald Trump administration intensifies its efforts to shut Huawei and the other Chinese 5G company ZTE out of international networks.

Under Secretary of State for Economic Growth, Energy and the Environment Keith Krach claimed recently that “the tide is turning” in this global effort against Huawei.

But South Africa seems unlikely to be persuaded as Huawei is growing increasingly integrated into all its main cellphone and data service providers.

Krach repeated America’s warning that Huawei could not be trusted, because, like all Chinese companies, it was bound by law to hand over any information demanded by the Chinese government.

Krach, whose mandate includes ensuring global economic security, outlined in a phone briefing to international journalists how the US government was accelerating its efforts to protect 5G security (in other words, to cut out Huawei).

First, the US had secured a $12-billion investment from the Taiwanese Semiconductor Manufacturing Corporation to build the world’s most advanced semiconductor foundry in America, which he called the largest foreign investment in US history.

Second, the US was imposing a new rule to require global computer chip companies to get a licence from the US before they could provide important chips to Huawei that could only be produced with sophisticated US technology.

“It’s imperative that countries across the world adopt similar stringent export controls to keep critical tech out of the hands of the CCP (Chinese Communist Party),” Krach said.

And third, the US had unveiled its 5G Clean Path Initiative requiring all digital data entering or exiting US diplomatic facilities around the world to be conveyed only by “trusted” IT equipment.

“And that prevents Huawei or the CCP from siphoning off sensitive information,” he said. The US was encouraging all of its partner countries and companies to follow similar 5G clean path protocols and many already were.

A US State Department spokesperson explained that requiring a clean path for government communications was only one piece of the solution. “Critical essential services (electricity, transportation, water, etc.), and manufacturing systems will run on top of commercial 5G networks so it is crucial that countries put in place restrictions that prohibit untrusted vendors in all parts of their 5G networks.”

Krach welcomed Britain’s decision in June 2020 to reconsider the use of Huawei in its 5G network. This had “resulted in a predictable backlash from China,” with China’s ambassador to UK threatening to punish the British bank HSBC and withdraw Chinese investment from major British infrastructure projects.

Many other countries were also reevaluating their partnerships with Chinese firms, said Krach.

He reiterated Secretary of State Mike Pompeo’s reassurance that the US stood with the UK and all “freedom-loving countries” – against China’s “bullying”.

Krach said China’s threats against the UK were examples of the CCP’s three-pronged strategy of “concealment, coercion and cooption… China’s stated doctrine; it is seduced with money and reinforced with intimidation and retaliation”.

He cited as other examples China’s increasingly assertive claims to disputed territory in the South China Sea and on India’s northern border; its boycott of South Korean products in retaliation against South Korea’s decision to deploy the US Thaad anti-missile defence system to protect itself against North Korea; China cutting off Norway economically for five years because it had proposed a Chinese dissident for a Nobel prize; and Chinese apparel companies dropping a $100-million sponsorship from the Houston Rockets basketball team after its general manager expressed support for the Hong Kong pro-democracy protests.

He stressed that the US was not so naïve as to make countries choose between the US and China as China was a big trading partner for many of them, as it was for the US.

“But the world’s got to stand up to their retaliation practices and what they’ve done to countries like Korea.”

South Africa, however,  seems very unlikely to swell this tide, as President Cyril Ramaphosa vowed in 2019 that the country would certainly use Huawei for its 5G infrastructure. He said the US was only attacking Huawei because it was “jealous” of the Chinese company’s superior 5G technology.

“We cannot afford to have our own economy be held back because there is this fight that the US is having and born out of their own jealousies,” he told a Fourth Industrial Revolution (4IR) conference in Midrand in July 2019.

Robert Strayer, US deputy assistant secretary of State for cyber and international communications and information policy, dismissed this criticism at the time, saying the US  and other countries could get the same level of 5G technology that Huawei had developed from “trusted” telecom companies, Ericsson, Nokia and Samsung, without being exposed to espionage, theft of their personal information, or intellectual property stolen, or disruption of their critical services powered by 5G.

Daily Maverick asked Krach what the consequences would be for South Africa if it did not join the global “Clean Path Initiative” and continued to employ Huawei 5G technology.

“I think the consequences are with the security of your information and your data.”  There were “backdoors” everywhere in deals with Huawei he said. “I’ve spent 30 years in Silicon Valley; they can do anything they want. They hold those keys.

“And understand there’s a National Intelligence Act, a law in China, which requires any Chinese company, state-owned or otherwise and any citizen, to turn over any information, proprietary technology, intellectual property, data, genetics, upon request, to the government of China, to the Chinese Communist Party or to the  PLA, the People’s Liberation Army, or they suffer the consequences.”

Such government requests had been frequent to Huawei and ZTE.

“Huawei has been involved in numerous cases regarding theft of intellectual property, bribery and other crimes,” he said.

“So the risk to the people of South Africa is always there… So what I tell countries, it comes down to one word only, and that is ‘who do you trust?’”

Krach said Huawei was “dramatically subsidising” 5G, “giving it to most countries for free”. And that’s because they want the data. And if you look at their aim, it’s to create this surveillance state and being able to export it.

“Because on top of that, 5G-run cameras, listening devices, all those kinda things,” he said.

Krach said the US Clean Path Initiative would also create commercial risks for any international telecom operator which continued to use Huawei or ZTE 5G technology. If one of these telecoms currently had a Huawei tower and antenna providing data to a US diplomatic facility, it would now also have to erect a Samsung, Ericsson or Nokia tower just to serve the US facility. “So that ends up raising the cost for the telecom operator.”

Krach welcomed the recent decision by the Nasdaq stock exchange, requiring the approximately 155 Chinese companies listed on the exchange to comply with the rigorous international reporting standards stipulated in America’s Sarbanes-Oxley legislation.

He noted that Chinese companies had received a waiver in 2013 exempting them from this standard which was now being removed.

The exemption has made it very risky for American or international investors to invest in these companies because they had no idea what was happening inside them.

“These books can be cooked and tampered with and nobody knows.” And also, these companies were not on a level playing field with other businesses.

“And I know the London Stock Exchange feels the same way,” he said.

He also noted that because of these concerns about lack of financial disclosure, Trump had moved to stop the investment of US federal employee retirement funds into Chinese companies.

The US was also ready to help developing countries avoid having to use the 5G technology of Huawei and ZTE by offering them financing through its new International Development Finance Corporation (DFC) to acquire 5G from the three other 5G companies, Krach said.

US government investment guarantees had increased to $60-billion under the DFC and the rules had changed to allow the DFC also to back up investments of non-US companies.

“So we can finance 5G operations around the world. And I think that’s going to make a really, really big difference.”

Krach said the DFC was playing a critical role “in positioning the US as a sustainable, transparent, trustworthy alternative to China in the area of global development financing,” including in health.

He said China’s Covid-19 response was an example of the CCP’s “three-pronged strategy of concealment, coercion and co-option”.

“I think the pandemic, everyone understands now, is the result of their concealment of the virus.

“And I think countries are waking up around the world that they co-opted our economy by entangling our supply chains, like pharmaceuticals.”

“They’re making $450-million a day off PPE this summer because of the pandemic. So they’re profiting from it.”

The DFC was playing an important role in international Covid-19 economic recovery, he said, including recently approving $1-billion of new investments to strengthen healthcare systems of emerging markets and developing countries.

Krach said the US had recently built up its capability to produce medical devices, such as ventilators, respirators, PPE and drugs such as the Covid-19 therapy Remdesivir, and it was working on the fastest development of a vaccine in history for Covid-19.

“And we want to help out as many countries as we can,” he said.

The DFC’s response to Covid-19 was part of the healthcare arm of the Economic Prosperity Network which the US had formed with like-minded countries and civil society in other countries which were committed to conducting all their economic activities and transactions according to a set of trust standards or democratic values.

One of the purposes of this network was to help countries deal with China’s aggressive tactics.

However, he stressed that “this is not an either or, it’s not like we’re asking the countries to choose between China and the Free World, not at all. It’s open to everybody, you just have to live up to these standards.”

Krach concluded that the global tide was turning against Huawei and China. “And it’s the result of a number of factors. Like Huawei not being able to get the chips they need; initiatives like the Clean Path; but it’s really people asking that question, who do you trust?

“It really boils down to that. I think the world has woken up and they see, they understand the CCP’s three-pronged strategy of concealment, co-option and coercion. And they see through it. And I think that’s the biggest factor in terms of the tide turning rapidly on China’s 5G strategy of creating a future surveillance state. They look at that as one of their exports.” DM