Every 40 years, the Olympic ‘curse’ strikes 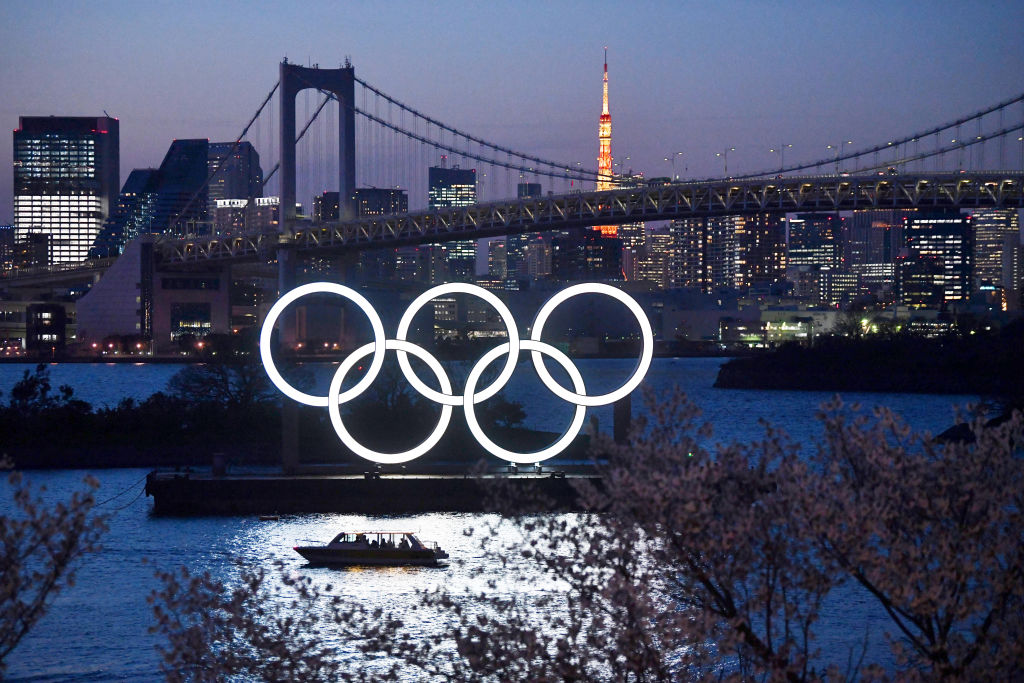 TOKYO, JAPAN - MARCH 25: A boat sails past the Tokyo 2020 Olympic Rings on March 25, 2020 in Tokyo, Japan. Following yesterdays announcement that the Tokyo 2020 Olympics will be postponed to 2021 because of the ongoing Covid-19 coronavirus pandemic, IOC officials have said they hope to confirm a new Olympics date as soon as possible. (Photo by Carl Court/Getty Images)

Japanese Deputy Prime Minister Taro Aso has a reputation for saying the wrong thing. In line to be the nation’s next PM, Aso is wildly wealthy and has spent a 40-year political career gaining notoriety for lavish spending and dodgy comments. He has praised Nazi political tactics, blamed women for not having children, openly regretted universal suffrage and even encouraged the elderly to die faster since their care is so expensive. His nickname is baka-shojiki, which means “stupidly honest”.

So when the Tokyo 2020 Olympics were postponed due to the Covid-19 pandemic that broke in March 2020, nobody was expecting Aso to say the right thing. His response was surprising, hardly diplomatic and definitely in bad humour. It was also honest, stupidly honest.

“It’s a problem that’s happened every 40 years,” he said, “it’s the cursed Olympics, and that’s a fact.”

But what did he mean exactly? Is there such a thing as a cursed Olympics, really? Once, they say, is an incident (Tokyo 1940); twice is a coincidence (Moscow 1980); and thrice is a pattern (Tokyo 2020). This year’s summer Games are the first to ever be postponed; yet, they also mark the third in a strange four-decade sequence of ill-fated Games dating back to 1940. This is also the second time that Japan’s Olympic optimism has been thwarted by world events.

To understand the first disappointment and this mysterious Olympic Curse, we must go back the 1930s and the inaugural Tokyo bid.

Most of the information on Japan has been widely discussed in Orienting the Olympics: Japan and the games of 1940, a 2003 dissertation by Sandra Collins, Doctor of Philosophy at the University of Chicago.

The Great Depression of 1929 hit Japan hard. Like many island nations, the Land of the Rising Sun was hardly replete with resources and its post-World War I economy depended on the export of luxury goods, like silk, to the West. When Wall Street crashed in the fall of 1929, demand for luxury products disappeared and the country was thrown into economic crisis with millions facing starvation.

Historically, economic desperation is fertile ground for extremist ideas to take root. The time was ripe for aggressive imperialism to take off, and the fiercely militaristic government of the time saw expansion as the ultimate problem-solver. Japan wanted more space, more resources, more labour and more national pride; colonising China could guarantee all four.

This started with a ruse. In 1931, the Japanese military staged a railway explosion, detonating dynamite on their own South Manchuria Railway in mainland China. The Chinese were immediately blamed for sabotage and Japan moved in violently. They invaded the entire Manchurian region and set up a puppet state, Manchukuo.

The League of Nations (a proto-UN set up after World War I) challenged this, but Japan just thumbed their nose at them. If the French and British could have global empires then, they insisted, so could the Japanese. Japan, petulant, left the League and chose diplomatic isolation over accountability. Thus began a decade of aggression against China most horrifically marked by the 1937 Rape of Nanking.

Imperial conquests aside, on the domestic front, Japan was increasingly image conscious. This was particularly prominent in the capital where Tokyo Mayor Hidejirō Nagata was hatching a plan to boost patriotism with a spectacular celebration of Japan’s 2,600th anniversary. Bureaucrats had calculated over two millennia of turbulent history to conclude that 11 November 1940 would mark the critical anniversary of Emperor Jimmu’s ascension to the throne.

This just so happened to coincide with an Olympic year and should the Games be held in Tokyo, so Nagata thought, it would thus be the perfect commemoration. The entire city would be involved, the Japanese public implicated in the imperial project as they prepared Tokyo for the event. Further, hosting the Olympics would force the international community to recognise Japan as a modern and legitimate nation, hopefully patching over a decade of atrocities.

After a four-year campaign that was used as a means of international diplomacy, Japan won the bid in 1936. Tokyo would be the first non-Western host of the Olympic Games.

But don’t forget Japan had a voracious appetite for conquest and the following year, they initiated the second Sino-Japanese War, or, as the Chinese call it, the War of Resistance Against Japanese Aggression.

On 7 July 1937, politician Ichirō Kōno began a debate that would shake Japan for the next year. “Today we begin war with China,” he declared in parliament, “and thus, it is imperative that we cancel the Olympics.”

With resources and national attention being funnelled to the imperial effort, hosting the Games became increasingly unfeasible. But this was more than a matter of logistics – national pride and reputation were on the table, too. It seemed Tokyo had three options:

The international press was full of rumours and speculation about the fate of the Games and the viability of Tokyo as host. Japan’s carefully constructed public image was rapidly disintegrating and on 15 July 1938, one year and one week after war began with China, the Minister of Welfare, Marquis Kōichi Kido announced the forfeiture of the Olympics.

The event was given over to Helsinki, one of the original competitors for the bid, but the outbreak of WWII on European soil saw the Games cancelled until London 1948. The Olympics would only make it back to Tokyo in 1964, a second-chance Games.

Set aside the second chances, fast-forward to 40 years later in Moscow and the curse struck again.

This part of the story begins with a teddy bear named Misha. The lovable mascot of the 1980s Games was designed by beloved Russian children’s illustrator Victor Chizhikov and is, granted, irresistibly cute. Covered in brown fluff, Misha has oversized ears, a broad smile and a snazzy striped belt buckled with five golden Olympic rings. His soft and snuggly appearance was the exact opposite of the vicious Russian bear perceived by so many in the West in the final decade of the Cold War.

In 1980, when the Olympics went to Eastern Europe for the first time, Misha’s smiling face represented the chance to thaw tensions with some friendly athletic competition in the heart of the Soviet Union.

The US, however, was having none of it. American patience was already wearing thin since Los Angeles had lost the 1980 bid to Moscow. When Soviet forces invaded Afghanistan in December 1979, Jimmy Carter issued an ultimatum: withdraw troops within a month, or the US would boycott the Olympics. Once again, military conquest had jeopardised the Games.

The Soviets were quickly embroiled in conflict with Afghan guerrilla fighters and ended up in a nine-year war. Suffice to say, America did not attend the Summer Games. But this was a time of ideological warfare between the capitalist West and socialist East, and the Carter administration jumped at the chance to humiliate and delegitimise the Soviet Union, encouraging many nations to boycott the event.

Sport, it seemed, was not above politics. In fact, athletes could be politicians! To get African nations to agree to the boycott, superstar boxer Muhammad Ali was deployed on a tour of the continent to gain support for shunning the Moscow Olympics. Accompanied by Ambassador Lannon Walker, The Champ travelled to Tanzania, Kenya, Nigeria, Liberia and Senegal, meeting with state leaders and Olympic representatives to convince them to keep their athletes at home.

Ali, like Aso, had a reputation for speaking his mind and weighing the consequences later. This was to be the downfall of the Africa tour, at least from the US perspective. Locals quickly criticised Ali as a sell-out, a puppet of US diplomacy. They reminded him of America’s own failures to help end apartheid. In the previous Games, Montreal 1976, 25 African nations had refused to participate. They were protesting New Zealand who were allowed to compete despite the All Blacks touring in Vorster’s segregated South Africa. America went ahead and sent athletes to Canada that year. So did Japan, among their delegation was Taro Aso himself, on the shooting team. He didn’t win any medals.

Ali readily changed his mind when presented with new information. Much to Ambassador Walker’s dismay, he used the platform to speak out against apartheid and urge the US to use their influence to challenge the racist regime.

Ultimately, 65 nations from across the world boycotted the 1980 Moscow Olympics, some of them attending the “Liberty Bell Classic” in Philadelphia, organised as an alternative. A mere 80 nations did compete, but the Soviet Union and East Germany overwhelmingly skewed the medal tally by winning 127 out of 203 golds. When mascot Misha flew out of the stadium clutching colourful balloons at the closing ceremony, he had a tear in his eye. Yet again, the perhaps naive aim of international goodwill through sports had failed.

And then came 2020. This year, it is not wars and invasions compromising the Games, but a global pandemic. But, undeniably, the 40-Year Curse has struck again. Tokyo is still lined up to host the Games in 2021 if it’s safe and possible. Sports fans and those, like this writer, who are in it for the sheer spectacle, remain hopeful that they’ll pull it off. 2060, however, is not looking so good. DM/ML