Dancing to a new tune – ballet classes with visors and masks 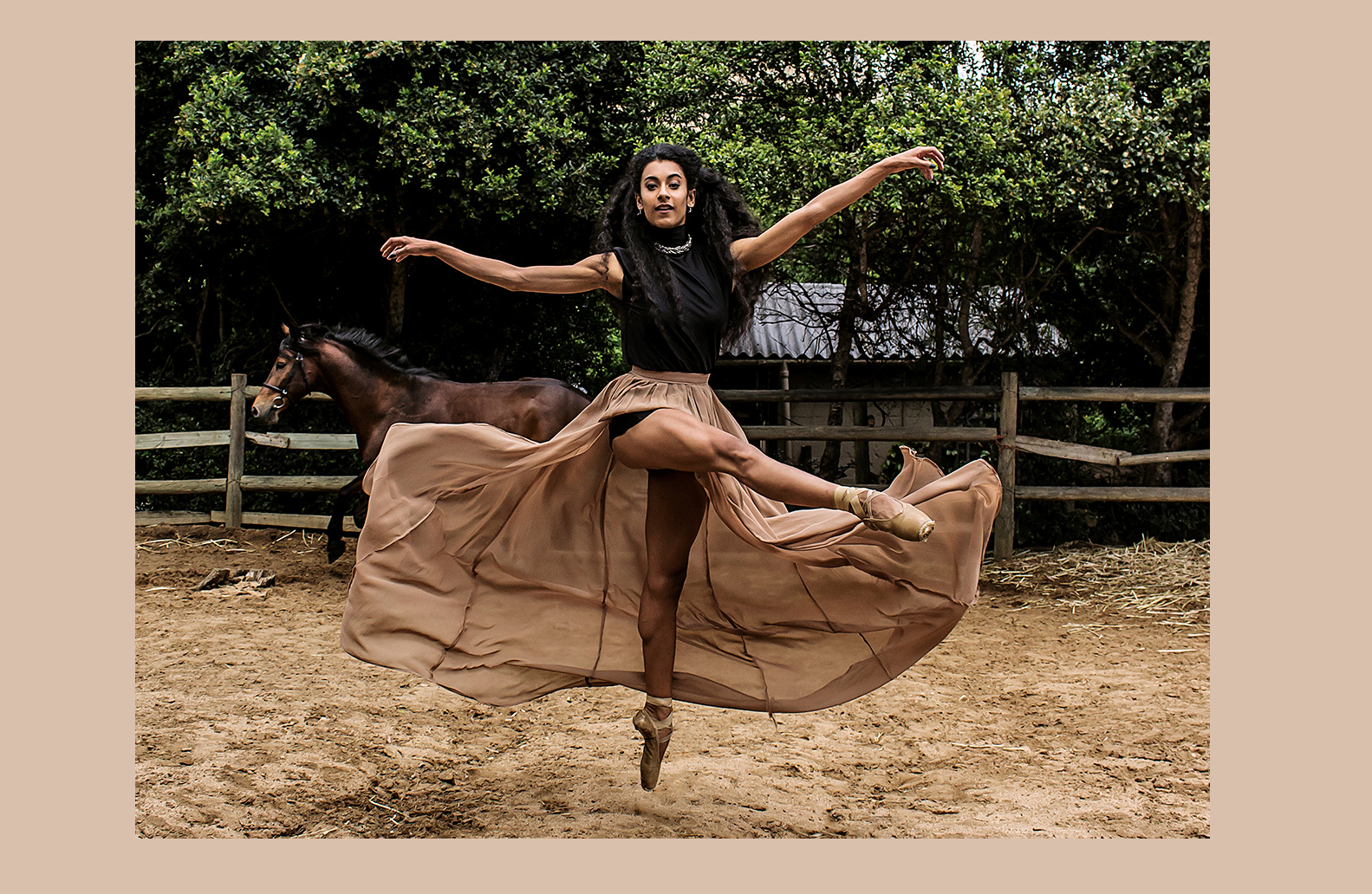 The performing arts sector has been badly hit by the lockdown, with many artists struggling to make ends meet. Now, the Cape Town City Ballet is slowly resuming classes on a reduced schedule. While there are no rehearsals just yet, dancers are donning visors and masks and working hard to regain their strength and fitness levels.

It soon became apparent to 23-year-old Mikayla Isaacs, a dancer with Cape Town City Ballet, that using a dining room chair as a barre was not going to cut it. As soon as lockdown started, she and her stepfather took a trip to a hardware store and bought materials to build a support structure for her daily practice.

“I felt quite proud and it was good to practice with a structured barre instead of a chair. Mentally, if you see a ballet barre you’re tuned in [to your practice],” she says.

Cape Town City Ballet closed their doors on 16 March when President Cyril Ramaphosa announced that the country would go into lockdown. Since then, dancers have continued fitness and ballet classes at home over Zoom. Speaking to Maverick Life over the phone, two dancers said they were excited to be back with their colleagues, in the same physical space, doing what they love.

The company resumed classes on Friday 5 June and, at their studio in Rondebosch, each dancer has their temperature taken at the door. They wear masks and visors during their daily two-hour sessions and each dancer has their own square, marked out on the studio floor, to comply with physical distancing.

CEO of Cape Town City Ballet, Debbie Turner, says getting back to fitness and form is paramount – but not at the expense of their health. And while strengthening classes are resuming, rehearsals are on hold for the time being.

“It’s scary. Sleep at night is not easy because the level of real responsibility weighs on you. We know how to look after dancers in a normal everyday space, but a virus lurking on a surface is something we haven’t had to think about before,” says Turner.

Before lockdown, the company was in the rehearsal phase for a triple bill, as well as for performances of Swan Lake and Carmen, which were due to hit the stage in August 2020. But there is very little idea of when dancers will appear before a live audience again.

“The creative sector has literally had the handbrake pulled up so tight that the whole sector is in dire circumstances,” says Turner.

The financial strain on the company has been enormous. On 25 March, the Department of Sports, Arts and Culture announced that a R150-million relief fund would be made available to artists and athletes. The department received over 5,000 applications, but only 488 artists and organisations were paid out, including Cape Town City Ballet. They received R20,000. However, as Turner points out, the dancers’ visors alone have cost R13,000.

“I would not want the job of any of those ministers for anything in the world, but I do think that the department of sport, arts and culture needs looking at in terms of the way the creative sector is valued and respected. I do feel that we are neglected as a sector which contributes significantly to the economy,” says Turner.

Ballet dancer Mia Labuschagne, 24, has been with the company since May last year. She says they’re very lucky to be employed full time. “Just knowing that we still have work to go back to… freelance artists don’t have the security of an employer.”

Labuschagne started dancing when she was just three years old. She says working from home without a wooden sprung floor was the most challenging aspect of lockdown, and meant there was greater risk of injury.

“There is definitely the sense of us having lost some strength… there is stress about getting injured going back to work, but we’ve really been focusing on keeping our bodies as strong as possible during lockdown,” she says.

“The lack of freedom for a dancer who is used to flying around a room and burning energy… that has been the biggest challenge for them, the psychological acceptance of not doing what you’ve been doing your entire life,” says Turner.

Mikayla Isaacs started dancing at the age of six and by the time she reached high school, two-hour dance sessions were the norm. “Dance was everything. I enjoyed swimming and running but I lapped up dance, and in high school I decided I wanted to dance professionally.”

After her final year at school, Isaacs went into full-time ballet dancing, doing 12 hours a day. “My ballet day would include floor barre for three hours, a ballet class, then I would go to the gym, swim and sauna and then go back to the studio for more ballet. It was intense training, but it’s something I would never take back. It transformed my dancing,” she says.

Her sacrifices were immense, especially socially. “I would have to say no to birthday parties, to going out, because I had ballet. When we started university, my friends would go out and I would leave the club early because I had training at 06:00,” she says.

Isaacs was one of the dancers at Cape Town City Ballet who was getting ready to perform Swan Lake before lockdown, and although there are anxieties about going back to the studio, she is relieved to be packing her pointe shoes and heading to class once more. And Labuschagne agrees. “As an artist, it’s so special to connect with colleagues and friends and I think there’s only so much connection you can get through a screen,” she says.

“The stage is it for us… we practice for all these hours for a one-hour performance and that’s something we took for granted [before lockdown], going into a theater and putting on a ballet,” says Isaacs.

The world will turn to the creatives once people begin navigating their way out of lockdown, says Turner, adding that venues are already looking at how to keep audiences safe in the coming months. This would include  measures like removing rows from the theatre, and only allowing people to sit in every third seat.

“This is only a season – there’s something to look forward to. In a time like this, artists are called on to bring hope and inspiration,” says Labuschagne. “There is still a future to work towards.” DM/ ML