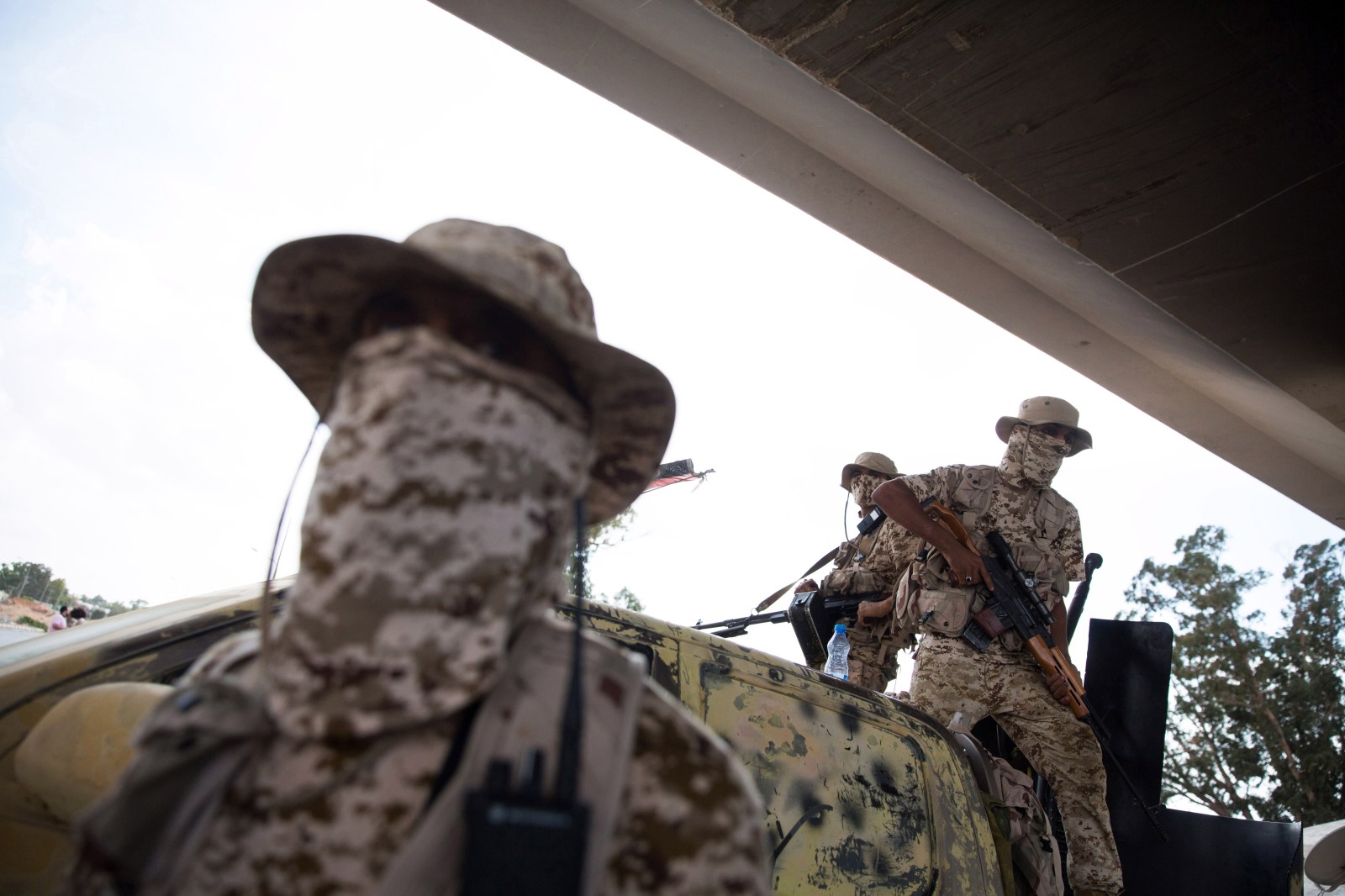 epa07047166 Libyan forces loyal to the Government of National Accord (GNA), Libya's internationally recognised government, guard from a position south of Tripoli, Libya, 25 Setember 2018. According to reports, Tripoli Security Directorate on 25 September 2018 announced end of fights on the outskirts of Tripoli after the withdrawal of the fighters of Misrata (east of Tripoli) and the strength of the fighters of Trahona (south-east of Tripoli). EPA-EFE/STR

Military sources in Haftar’s Libyan National Army (LNA) said their forces had withdrawn from the town of Tarhouna. They headed towards Sirte, far along the coast, and the airbase of al-Jufra in central Libya. The LNA made no immediate official comment.

The advance extends the control of the Government of National Accord (GNA) and allied forces across most of northwest Libya, reversing many of Haftar’s gains from last year when he raced towards Tripoli.

The GNA has been backed by Turkey, while Haftar, whose LNA still controls the east and oil fields in the south, has been supported by Russia, Egypt and the United Arab Emirates.

The United Nations has started holding talks with both sides for a ceasefire deal in recent days, though previous truces have not stuck. The GNA gains could entrench the de facto partition of Libya into zones controlled by rival eastern and western governments whose foreign backers compete for regional sway.

Turkish military support for the GNA, with drone strikes, air defences and a supply of allied Syrian fighters, was key to its recent successes. Ankara regards Libya as crucial to defending its interests in the eastern Mediterranean.

However, the LNA still retains its foreign support. Washington said last week Moscow had sent warplanes to LNA-held Jufra, though Russia and the LNA denied this.

The United Nations says weapons and fighters have flooded into the country in defiance of an arms embargo, risking a deadlier escalation. Meanwhile, a blockade of oil ports by eastern-based forces has almost entirely cut off energy revenue and both administrations face a looming financial crisis.

Located in the hills southeast of Tripoli, Tarhouna had functioned as a forward base for Haftar’s assault on the capital. Its swift fall suggests Haftar’s foreign supporters were less willing to sustain his bid to take over the entire country once Turkey intervened decisively to stop him.

The GNA operations room said in a statement that its forces had captured Tarhouna after entering from four sides. Abdelsalam Ahmed, a resident, said GNA forces had entered the town.

Videos and photographs posted online appeared to show GNA forces inside Tarhouna cheering and hugging each other and firing into the air.

“The Libyan government forces are rapidly moving in an organised manner and with armed drones. There could be a solution at the table, but Haftar’s forces are losing ground in every sense,” said a Turkish official. (Reporting by Reuters Libya Newsroom; additional reporting by Orhan Coskun in Ankara; writing by Angus McDowall in Tunis Editing by Jason Neely and Peter Graff)