Christiaan Bezuidenhout of South Africa during the final round of the Arnold Palmer Invitational Presented by MasterCard at the Bay Hill Club and Lodge on March 08, 2020 in Orlando, Florida. (Photo: Sam Greenwood/Getty Images) / (Unsplash/Jeremy Bishop) / Kholo Montsi of South Africa in action against the 7th seeded Marco Brugnerotto (ITA) in the 1st round of the menís singles during day 2 of the SA Spring Open at Ellis Park Tennis Centre on September 25, 2019 in Johannesburg, South Africa. (Photo: Reg Caldecott/Gallo Images)

Christiaan Bezuidenhout of South Africa during the final round of the Arnold Palmer Invitational Presented by MasterCard at the Bay Hill Club and Lodge on March 08, 2020 in Orlando, Florida. (Photo: Sam Greenwood/Getty Images) / (Unsplash/Jeremy Bishop) / Kholo Montsi of South Africa in action against the 7th seeded Marco Brugnerotto (ITA) in the 1st round of the menís singles during day 2 of the SA Spring Open at Ellis Park Tennis Centre on September 25, 2019 in Johannesburg, South Africa. (Photo: Reg Caldecott/Gallo Images)

The continued suspension of amateur non-contact sports under South Africa’s Level 3 lockdown regulations has pushed the sporting industry closer to the brink of collapse.

The golf industry, which is the biggest sporting employer in South Africa, providing livelihoods for 40,000 people at its facilities alone, is weeks away from an irreversible disaster if the lockdown regulations stay as they are.

Last Thursday’s announcement by Co-operative Governance and Traditional Affairs Minister Nkosazana Dlamini Zuma that non-contact professional sports could resume from 1 June, when the country goes to Level 3, was met with incredulity by most sporting federations.

Limiting non-contact sports to professional status only, is like throwing one lifejacket to a sinking ship with hundreds of people on board.

Organised amateur sport is the lifeblood of the industry in South Africa. Professional sport only makes up a tiny percentage of participants and without amateur competitions, leagues and tournaments that bring in affiliation, competition and event income, the sector is unsustainable.

Professional sport is the tip of a giant pyramid and its return, when done in isolation to the rest of the industry, has almost zero benefit for sports federations at all. Golf, as the largest industry, has been hardest hit.

An IFM Sports Marketing survey done in 2008 and adjusted for 2019, shows that the golf industry is worth nearly R50-billion to the South African economy. Half of that could be wiped out if the sport at the amateur level does not resume soon. 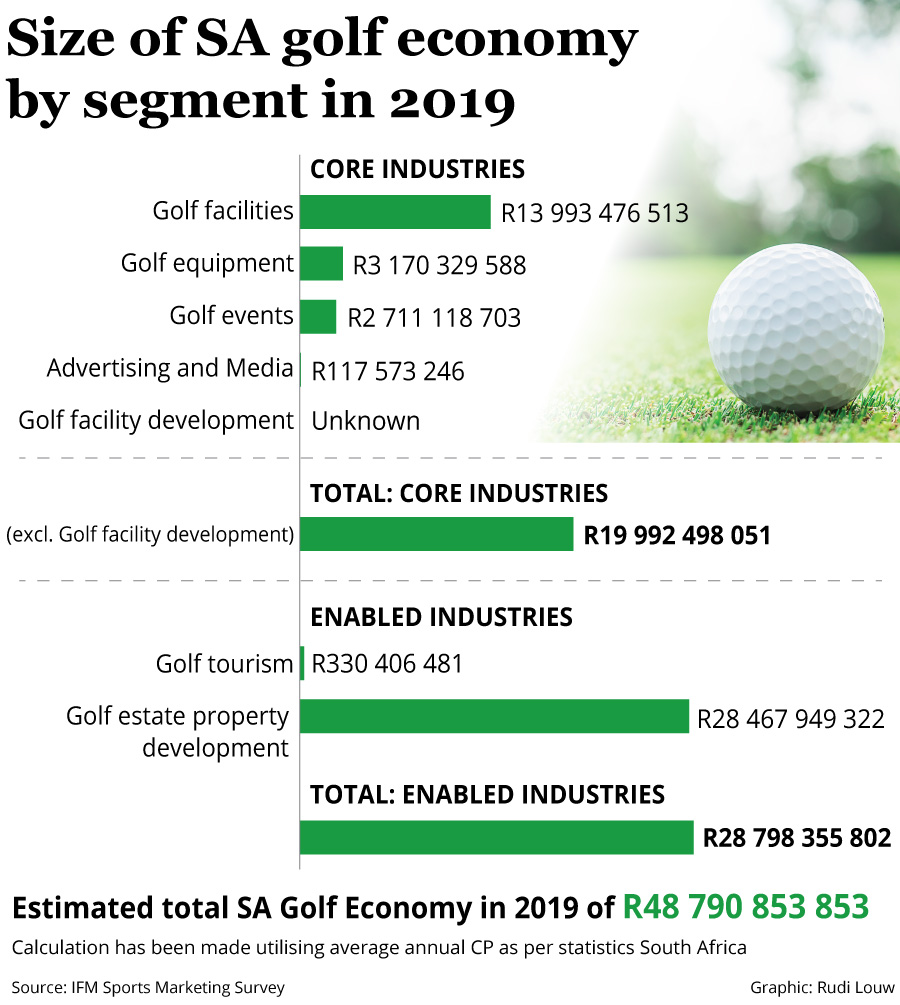 “Golf is not like a lock-up-and-go apartment, which you leave for three months and return to find everything working,” GolfRSA chief executive Grant Hepburn told Daily Maverick.

“The longer this continues we are going to have permanent casualties. I mean that there will be a large number of golf courses and estates that will not come back, they will be out of business forever. We estimate it could be over 50% of them in the next few weeks. The amount of debt they are incurring currently to stay afloat is unsustainable.”

It follows, if that prediction is accurate, at least 20,000 jobs in the sector will be lost, which doesn’t even take into account the myriad businesses that operate in the golfing ecosystem, such as tourism.

A simple example is that if a golf tourist were going to an area to play six courses in a week, but there are only two remaining, will that person bother to undertake that trip, or go elsewhere? The snowball effect of the golf industry collapsing is not linear, its tentacles are wide and deep.

Most sports federations have been lobbying government over the past few weeks, but even more frantically since last Thursday when the draft regulations were released. Outside of obvious contact sports such as rugby, football, boxing, wrestling and a few others, most federations expected that Level 3 would allow a return-to-play for the bulk of their members.

Non-contact sports such as swimming and surfing, golf, gymnastics, tennis and several others were moved to release a statement last Friday calling for a review of the decision.

“I expect this collective lobbying and pressure to intensify in the coming days because there are thousands of livelihoods at stake across all areas of the local sports ecosystem.

“The risks of job losses across our industry remain real and frightening. Golf, swimming, gymnastics and tennis combined create 72,000 jobs in South Africa. Many of these jobs are in the grassroots and amateur areas of our sports. That is just for four sports in South Africa… imagine the total number across all 76 official sporting codes in our country.”

A recent survey by the South African Sports and Olympic Committee (Sascoc), called SA Sport Day Zero, returned a bleak picture that 83.7% of its federations would be out of business in six months after lockdown began. The country is two months into that time-frame already.

“I can only talk about what I know in the golf industry,” golf estate developer Dave Nagle told Daily Maverick.

“Golf, even in South Africa, is a dollar-based business. At the best of times, it struggles because green fees cannot be charged at the same level as they are in America, even though the facilities are on a par with those over there.

“A four-seater golf cart costs R170,000, while a golf estate needs to spend R15-R16 million to get a decent fleet of course maintenance equipment. It’s expensive.

“But you have to look at what it does for the economy. I’m involved with three courses and I employ 800 people in building and course maintenance. Up until now we have been paying our people, but we can only manage three months. There needs to be a reconsideration of these regulations because golf is played outdoors, with plenty of space for social distancing.

“On the three courses I’m involved in, there are nine restaurants, which typically employ 40 people each – chefs, waiters and other shift workers. They are all unemployed currently. There are a huge amount of people that rely on the golf industry. I’m just one small cog in the wheel.”

While individual sports federations have been communicating with Sports Minister Nathi Mthethwa and trying to find common ground, Sascoc has been shown up for the ineffectual and rudderless organisation it is.

Sascoc, which is bleeding money, is embroiled in yet another unresolved leadership crisis while the sports federations it supposedly represents are on the brink of collapse. There has been no leadership and guidance from Sascoc.

“They drafted one return-to-play document, which was a very poor version of what was needed,” a senior administrator told Daily Maverick. Another administrator said: “There is no masterplan [from Sascoc]. A lot of sports are trying to collaborate and work together now because we are fighting for survival.”

A third administrator’s response when asked where Sascoc were during the crisis, was instructional: “Nowhere,” was the succinct response.

Sascoc effectively washed its hands of the situation when it released a statement earlier in May which in essence said that sports federations were on their own.

“I state on behalf of Sascoc, that the protocol of resumption is the responsibility of each federation to determine when they are going to return to activity and on what basis,” Sascoc acting president Aleck Skhosana said in the statement.

“We cannot prescribe to federations when they should restart, just like we did not prescribe to them when they suspended or stopped their activities. The best we can say is that each professional and amateur sport federation must look at the safety protocols that will protect the health of their athletes, coaches, administration and all involved.

“So, when they are happy, the health department is happy and the whole government is happy with the protocols they present, then Sascoc will also be happy. We are not a Jack of all trades.”

Football, rugby and cricket can return to training

Professional football, cricket and rugby were the big winners with the announcement by Mthethwa on Saturday that they could return to training under strict Covid-19 health and safety guidelines.

“We welcome the fact that athletes can start training under strict specific conditions. Furthermore, there are requirements for a thorough monitoring of all athletes to ensure full compliance. It is also clear that contact sports like football and rugby among others cannot resume competitively under Alert Level 3 from the minister’s briefing on Saturday,” said Safa acting CEO, Tebogo Motlanthe.

“Safa welcomes such continued engagements, mindful of the negative financial impact Covid-19 has had on sport in general. Football, rugby and cricket are amongst the major sporting codes that have been heavily impacted by the pandemic.”

SA Rugby also welcomed the news although the resumption of competitions and matches appears to be some way off for contact sports.

“This is the news sport has been waiting to hear as it allows us to begin to ramp up preparations for an eventual return-to-play,” said Jurie Roux, SA Rugby CEO.

“We submitted a comprehensive, staged return-to-play protocols document to the department five weeks ago and we are ready to begin medical screening of players immediately.

“We will seek further clarity from the department on the application of the guidelines as they apply to contact training. But this is an opportunity for our players to enhance their lockdown training regimes by increasing their fitness work for an eventual return to play.”

Cricket South Africa CEO Jacques Faul was encouraged by the news for the professional arm of the sport, but also made it clear that players uncomfortable with the return-to-play protocols were not under pressure to return to the field.

“This is a big boost for the operational side of our cricket,” Faul said. “We have been in regular contact with the minister and they have been very supportive of the game in these difficult times.

“At this stage these regulations apply only to professional cricket and our next step will be to draw up a protocol covering the return to training and playing and submit it to the government for approval. I will immediately be calling a meeting of our Covid Steering Committee on Monday to get this process underway. Both our national teams and our franchises will in due time be given the green light to return to training.

“I have already had discussions with the South African Cricketers’ Association (Saca) and I would like to stress that no player, coach, support staff or administrator will be forced to return to training if they are uncomfortable with it at this stage.” DM