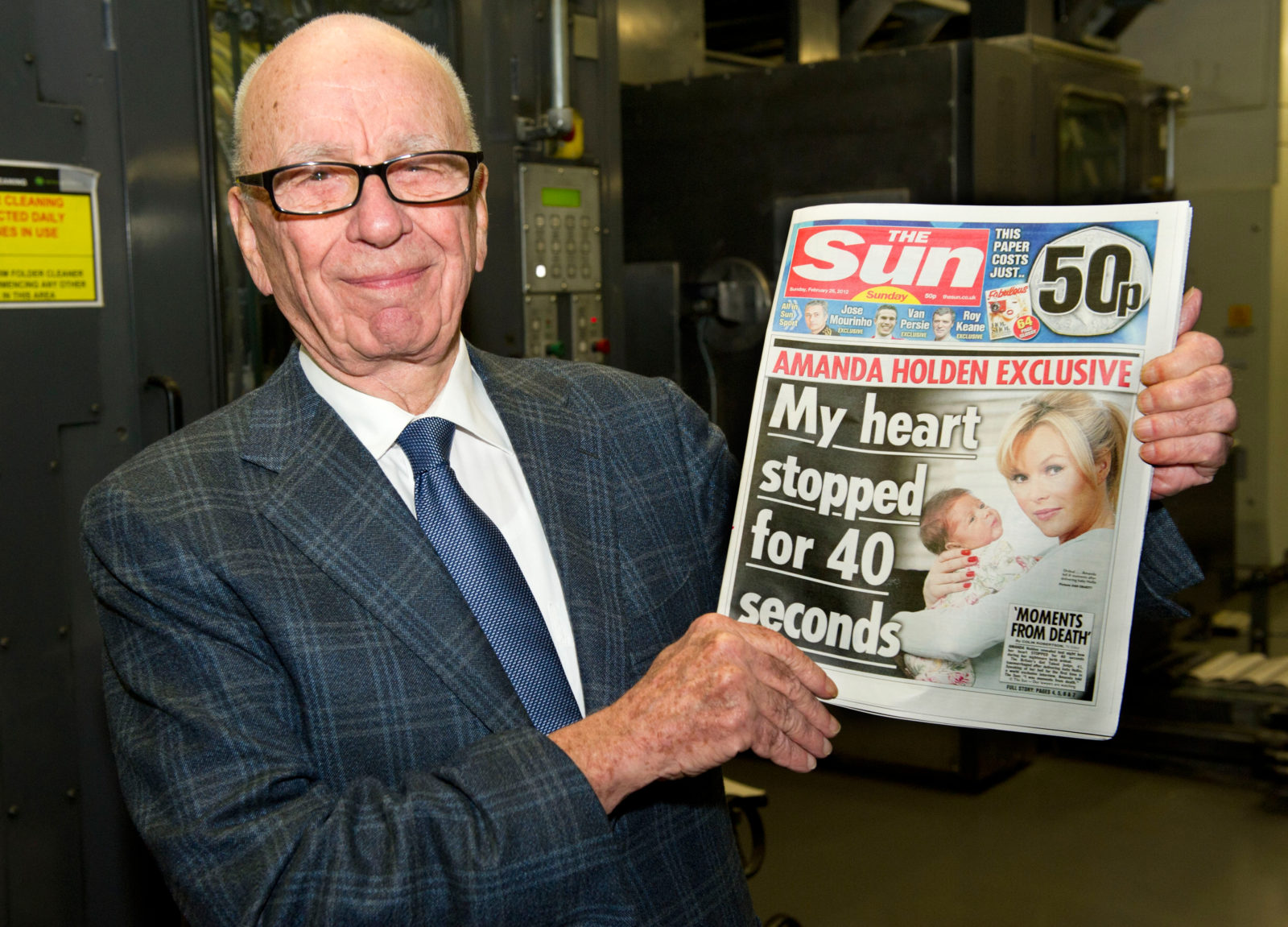 BROXBOURNE, UNITED KINGDOM - FEBRUARY 25 In this handout photograph provided by News International, Rupert Murdoch, Chairman and CEO of News Corporation, reviews the first edition of The Sun On Sunday as it comes off the presses on February 25, 2012 in Broxbourne, England. Around 3 million copies of 'The Sun On Sunday', the first ever Sunday edition of News International's daily tabloid newspaper 'The Sun', are due to go on sale on Sunday February 26, 2012. (Picture Arthur Edwards/News International via Getty Images)

Is a man with a net worth of about $17.1-billion really that influential? Yes, he is. From the company that brought us The Simpsons and Sean Hannity, here is a 20th and 21st-century story of power, media, drama and succession.

In March 2019, the Walt Disney Company acquired 21st Century Fox for $71.3-billion (almost R1.3-trillion), a move that significantly changed the media and entertainment landscape. It was the grand finale of a battle between Comcast, the other US media and telecommunications conglomerate based in Philadelphia, and Disney — as well as a surprising halt in Rupert Murdoch’s march for ever more power.

A halt but not an end, though. Over more than half a century, Murdoch has built a media behemoth, one political relationship and buyout at a time, moving his pieces across the print, broadcast and digital chessboards with the patience of a gnat and the attacking moves that would make Garry Kasparov envious.

The story started back in 1931, on 11 March 1931; Rupert Murdoch was born in Melbourne, Australia, the son of Sir Keith Murdoch – a reporter and newspaperman – and Dame Elisabeth Murdoch, known for keeping the family together (except when she forced a young Rupert to regularly “night camp” in the garden in order to toughen him up).

According to The New York Times, his dad was “a member of the Eugenics Society of Victoria and in an editorial once wrote that the great question facing Britain was “will she, if needs be, fight — for a White Australia?”.

Murdoch Snr owned two regional newspapers and had some local political influence but, on his death at age 67, he was broke. When a 21-year-old Rupert took over the father’s faltering business, all that was left was The News of Adelaide. Murdoch did not waste a minute to embark on his conquest to conquer the Australian media. His technique was unswerving: buy a couple of media outlets, gain political access, use your relationships, extend your power. Wash, Rinse, Repeat.

Although his approach might seem pretty standard, it was, in fact, aggressive by many standards. And in Australia, “he would eventually take control of nearly two-thirds of the national newspaper market”. (The NYT)

But that wasn’t all. He moved on to Britain in 1969. With News of the World and The Sun, he helped Margaret Thatcher win the 1979 race to become prime minister. The Iron Lady then paid back the favour by enabling the creation of Murdoch’s Sky Television (which at the time broadcast from Luxembourg).

In 1976, Murdoch decides to invest in the US and buys the New York Post for $30.5-million; there he meets, among many other influential figures, the then-former California governor, and the future president, Ronald Reagan and a dirty trickster called Roger Stone. He acquired the Boston Herald in 1982 and, in 1985, the 20th Century Fox studio. It took barely a quarter of a century. And it wasn’t enough to satisfy his ambition.

In 1996, in a move to compete with CNN from a right-wing ideological position, Murdoch launched Fox News Channel with, at its helm, the now infamous (for all but Donald Trump) Roger Ailes.

The rest is history. A very, very ugly history.

“Across the English-speaking world, the family’s outlets have helped elevate marginal demagogues, mainstream ethno-nationalism and politicise the very notion of truth”, says The New York Times.

.@FoxNews is no longer the same. We miss the great Roger Ailes. You have more anti-Trump people, by far, than ever before. Looking for a new outlet! https://t.co/jXxsF0flUM

In January 2018, Rupert Murdoch’s fourth wife Jerry Hall finds the media mogul lying on the floor of their yacht’s cabin, with a broken vertebra and a spinal hematoma. Lying in a hospital bed a few days later, the then-86-year old man is surrounded by his four eldest children – all ready to take over his empire if needed be; indeed, Murdoch prepared his children to become media moguls and follow in his footsteps. He also set up the Murdoch Family Trust – four of the trust’s eight votes for Rupert Murdoch and one each for his four grown-up children. This gives him control until his death when all votes go to his heirs.

“But I love all of my children,” once said Rupert Murdoch. Yet, the legend goes that the patriarch of six did favour his eldest son Lachlan and sort-of rejected his first-born daughter Prudence. It was even reported that, in an interview when asked about his children, he forgot to mention her.

And already, Lachlan is the CEO of Fox Corp. His design for Fox News is “an unabashedly nationalist, far-right and hugely profitable political propaganda machine” (The NYT).

On the other side of the political spectrum is his brother James, son number two and until recently, the CEO of 21st Century Fox and Sky, the deputy COO of News Corp and a contender in the race for power over the Murdoch empire. Following the Disney deal, James was left with $2-billion – a sort of farewell package – and no job; he invested in comic books and virtual reality entertainment, and donated money to former presidential candidate, Pete Buttigieg.

Meanwhile, the other heiress, second-born Elisabeth Murdoch, also a media entrepreneur, married to PR-pundit Matthew Freud and the great-grandson of Sigmund Freud, is behind the production company which helped create shows like MasterChef and recently launched Sister, focusing on “making high-quality television shows, movies, and other forms of entertainment”, as reported by Variety.

In the US, media dynasties like the Murdochs are not unusual. Before them, there was the Grahams; Katherine Graham was famously known for running the Washington Post, especially through the turbulent reporting around the Watergate scandal and President Nixon; but it was her father, Eugene Meyer, who bought a bankrupt Washington Post in 1933 for $825,000 and gave the control of the paper to Philip Graham. The paper stayed in the family for 80 years before it was sold to Amazon founder Jeff Bezos.

Then, there is the Hearst family: William Randolph Hearst III is still the chairman of the board of the Hearst Corporation, the company founded by his grandfather William R Hearst in 1887; and the Ochs-Sulzberger family who have been in control of The New York Times since 1896. In 2007, the Bancroft family sold the Wall Street Journal and Dow Jones Media to … Rupert Murdoch. They had owned the title for more than a century. The now 72-year-old Julian Sinclair Smith was the founder of Sinclair Media Group and is still at the helm of the 173 television stations. “It’s maybe the most influential media company you never heard of,” said John Oliver in Last Week Tonight. DM/ML