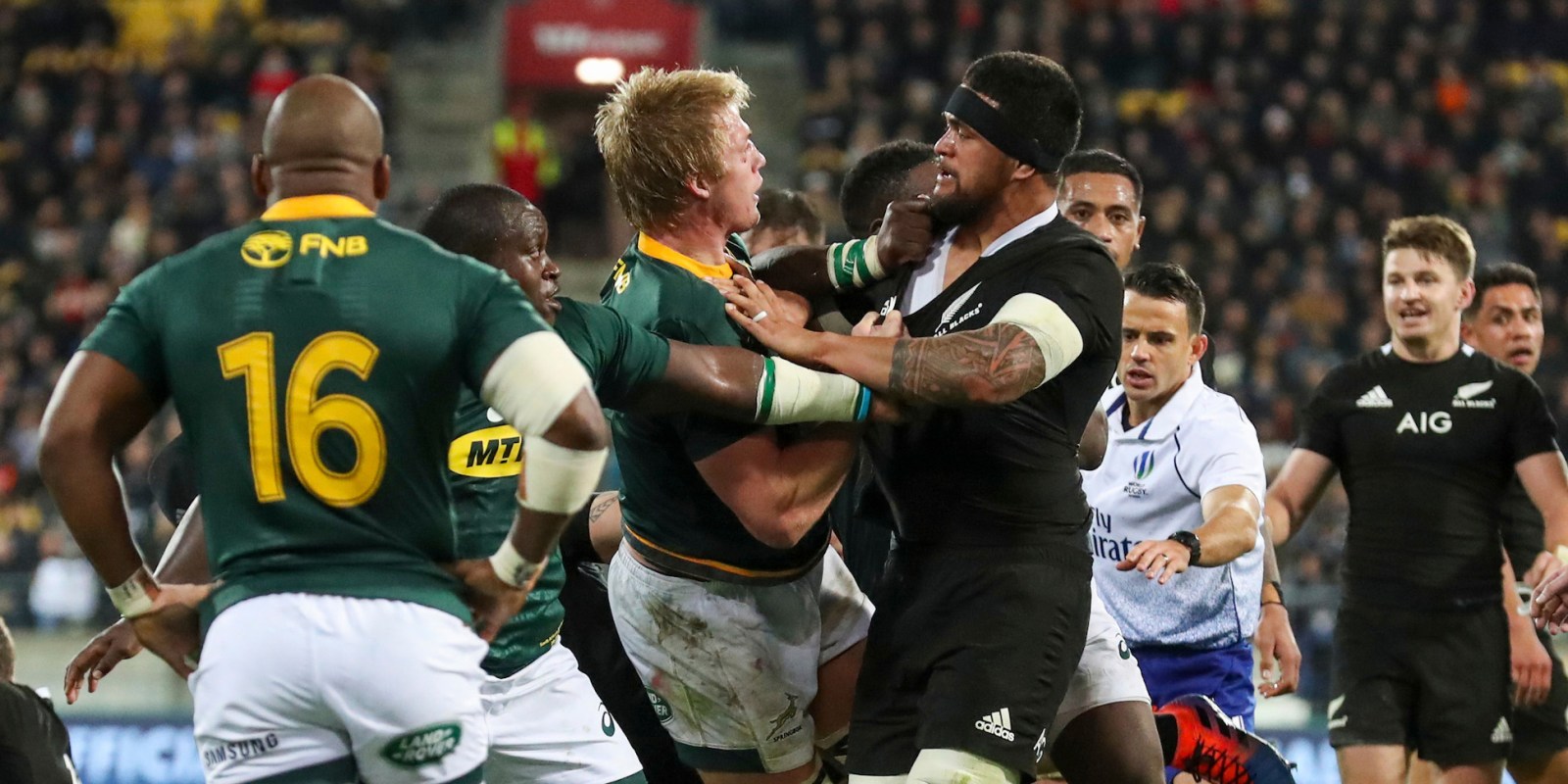 Pieter-Steph du Toit and Vaea Fifita square up to each other during New Zealand's 16-16 Rugby Championship draw with South Africa on Saturday at Wellington's Westpac Stadium, 27 July, 2019. (Photo: John Cowpland)

Current World Player of the Year Pieter-Steph du Toit has committed his immediate future to Western Province Rugby after a protracted contract negotiation ended with new terms for the player.

You wouldn’t know it from the official press release to announce that star flank Pieter-Steph du Toit was staying at Western Province, but his decision is based on improved terms.

The official communique was vague in details, although quick to point out that Du Toit, who terminated his contract last Thursday, hours before a 21-day transfer window closed, was taking a salary reduction like his team mates under the industry’s financial impact plan.

What Thursday’s press release didn’t state, which Daily Maverick confirmed through a source, was that Du Toit received the terms he wanted to separate his image right earnings from his salary terms. That was crucial to Du Toit staying in Cape Town until after the British & Irish Lions’ 2021 tour to South Africa. The altered terms allow Du Toit to pursue several more lucrative personal deals, which will more than compensate for his 25% salary reduction under an industry Collective Bargaining Agreement (CBA).

Under the terms of the CBA, all 1,396 employees in the industry, 717 of which are players, agreed to take pay cuts in an effort to reduce the industry budget by R1.2-billion because of suspended competitions.

A vital concession in the CBA was that a 21-day window be inserted allowing players the opportunity to seek alternative employment. There were two provisos – they could not transfer between clubs in South Africa. They could only terminate their existing contracts by moving to a foreign club.

The second was that if they were unhappy and wanted to terminate their contracts without an offer from a foreign club, they could do so, but would have to sit out playing rugby for the duration of the CBA, which ends on 31 December 2020.

There was no suggestion from Du Toit or his representatives that the tireless flank had an overseas offer, although reports had circulated that this was the case. It appears that Du Toit found a loophole to change his earning stream, while not altering the terms of his salary payments, which would have been against the rules of the CBA.

That vital piece of business was the sticking point between Du Toit and the union and one that was not finalised by the 15 May transfer deadline. It was eventually resolved on Wednesday.

But there was no word from WP Rugby on flank Cobus Wiese and flyhalf Jean-Luc du Plessis, who both terminated their contracts before last Friday’s deadline as they have overseas offers.

In a statement issued last Saturday, WP Rugby said it would hold those two players to their contracts, and as of 21 May, they had not been issued with clearance certificates.

This is unusual as it either suggests that Wiese and Du Plessis somehow breached the terms of the CBA by terminating without other offers. Or WP are refusing to accept the players’ resignations. If that is the case, then WP is in breach of the collective position.

WP Rugby, the professional arm of the union, holds players’ contracts. The Western Province Rugby Football Union (WPRFU), which wholly owns the company, signed the CBA. Daily Maverick understands that a loophole through which WP Rugby are trying to block these moves is that the company did not sign the CBA. That stance is likely to be tested in the coming days.

Wiese and Du Plessis’ agent, Hilton Houghton, told Daily Maverick on Thursday that the matter was now with trade union MyPlayers, who were engaging WP Rugby.

The Cape Town-based union is currently without a chief executive after Paul Zacks resigned earlier this year. But board member Andre van der Veen, who has been empowered to sign contracts, admitted that there had been a ‘lot of hard work’ to finalise Du Toit’s contract.

Stormers head coach John Dobson said that keeping experienced world class players such as Du Toit and the other seven World Cup winners in the squad, was a crucial element in the vision of rewarding the rugby community in the Cape.

“The rehabilitation on his injury is progressing well and we are looking forward to seeing him in a Stormers jersey again when we get back on the field.

“Not only is this good for the Stormers and Western Province Rugby, but it is also good for South African rugby that we have kept such prominent players in the country, looking ahead at the post-pandemic rugby offering and market.

“We are proud as a union of our achievement of contracting eight Rugby World Cup winning Springboks in the province and keeping them in the country,” said Dobson.

WP also confirmed that 2019 World Cup winner Warrick Gelant had been signed from the Bulls. They were able to sign Gelant as his contract was due to expire on 31 July this year, which meant he was in a ‘180-day negotiation window,’ which fell outside the CBA terms for local transfers.

“With Dillyn Leyds leaving, we couldn’t have asked for anyone better to step into the 15 jersey (than Gelant),” Dobson said. “I am sure his presence will also have a hugely positive influence on the players around him.

“We are also looking forward to giving Damian Willemse the opportunity to settle at flyhalf going forward, with Warrick providing his trademark strike threat from the back.

“Warrick is a deadly finisher with a wonderful feel for the game and awareness of space, which is just what we need for the talent we already have in the backline to thrive.” DM