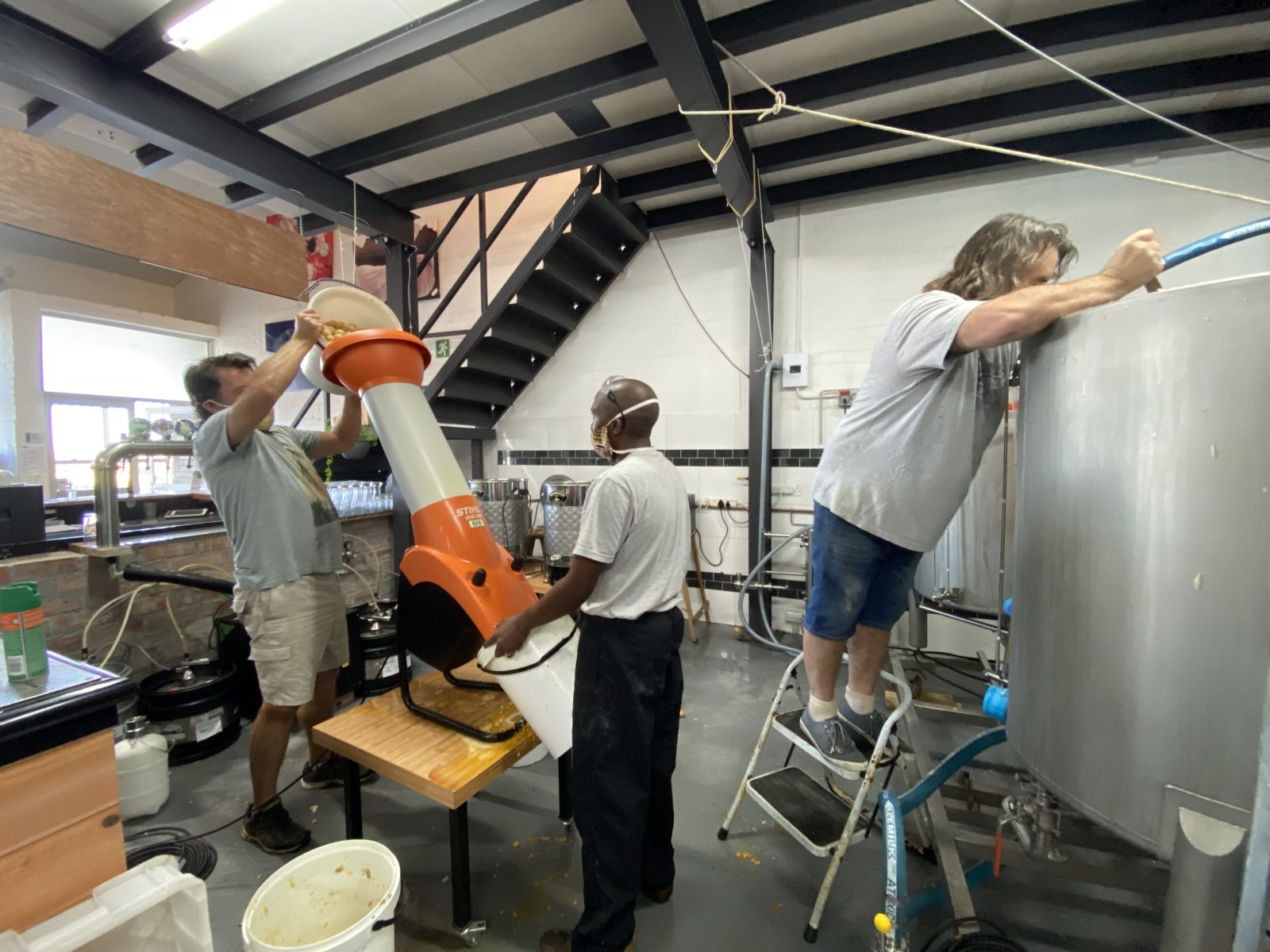 Instead of hops and yeast, the vats at Long Beach Brewery are being used to cook up soup for the hungry people of the South Peninsula. (Photo: Supplied)

Repurposing its idle brewery, Long Beach Brewery in the Cape Peninsula, together with Living Hope charity and a group of passionate volunteers, has launched a soup-making venture, with the aim of feeding at least 1,400 people a day.

The Covid-19 national lockdown has brought out the worst in some of our fellow South Africans, who are exposing their privileged colours all over social media. It’s also revealed incredible resilience among others, and innovative thinking as they adapt their businesses to not only survive but also – either self-funded or through generous donations – to step up to address a potentially more serious, deadlier problem: hunger.

While the sale of alcohol is banned under our current Level 4 (and likely to remain so in the Western Cape longer than other parts of the country), craft breweries have been standing idle; the beers they produce have shorter shelf lives than, say, those made by SAB (South African Breweries) – which itself had a bit of a dilemma involving 132 million litres of beer threatened with being dumped down the drain. That’s been resolved, but some smaller independent breweries have been getting proactive. Instead of brewing beer, they are brewing soup.

Rather than being filled with hops, yeast and water to make beer, Noordhoek-based Long Beach Brewery’s two 350-litre vats are now bubbling with 700 litres of nutritious vegetable soup every day, which is then distributed to a network of NGOs and organisations across the South Peninsula to give to those in need of a meal. The aim is to eventually scale up the soup-making to three times a day, to produce 4,200 servings.

Nic Buchanan, an organiser at Soup-a-Stars (a Southern Peninsula soup drive), explained how connecting with his former schoolmate Andre Viljoen from Woodstock Brewery on Facebook and seeing what his brewery was doing, helped him realise they could be doing something similar right in their own community.

“We’ve gone through the trials with Charlie Murray at Long Beach Brewery and got it right, and are looking to expand,” said Buchanan. “We also are getting soup directly from Woodstock Brewery, which has bigger equipment and turns out bigger quantities.”

Adapting the equipment to make the switch from beer to soup brought its own unique challenges – potato skins getting stuck on the heating elements, hard water vs soft water… but after a full day of trouble shooting they managed to get around these issues, said Buchanan. “Brewing beer is a clear liquid and this has got a lot of chunky vegetables, so it did create problems. Other breweries have different equipment and have had their own sets of issues.”

When brewing beer, the flavour elements tend to be added at the beginning of the process and allowed to sit for a while; for the soup, salt and other spices go in at the end. “It’s about putting ingredients together and getting them to mix and work together. The soup process is quite a lot quicker than the beer process because you only need 45 minutes for 350kg of veg to come to a boil and develop into something with a bit of flavour. At the end of the day you get something in a cup and drink it and enjoy it, and I think our soup has got a lot more nutrition than the beer – sans the alcohol!” smiled Buchanan.

Once the soup is cooked, Buchanan gets in his bakkie and delivers it to the townships in the area. “We target existing soup kitchens and organisations in the various townships, so mainly Masiphumelele, Ocean View, Vrygrond… there’s another one behind there, Montague Gardens, then there’s a few around Capricorn Park. We’re getting it to the soup mamas or NGOs there, taking it from large containers and getting it in their pots which then goes into smaller containers.”

The project is run purely on a volunteer basis, self-funded, and of course, relying hugely on donations of time, money and produce, in partnership with Living Hope, a registered non-profit organisation focused on poverty alleviation and food security in the area.

“It’s about dragging in as many people from the community as possible to help wherever they can fit,” said Buchanan.

One of the main missions is to make it a community-driven thing and not just a few individuals, continued Buchanan, and find a place for anyone keen to contribute: “Whether that is logistics or handling finances or donations, or driving like I’m doing, or peeling vegetables” – which are bought by the tonne from the market in Epping.

“The ongoing donations are going to be the big part,” said Buchanan. “We don’t see this problem disappearing in the next six months. The communities are going to be ravaged by unemployment even more so than they are now, so we are trying to look at this as a few years’ exercise rather than an immediate knee jerk reaction. Direct debits of a few rands a month that can make this sustainable.”

For the cost of one craft beer – R40 – you can help feed eight people. Buchanan shifted into arithmetic mode. “We’re spending R3,000 on a tonne of veg, converted 2000 litres of soup, each litre divided into about 330ml per cup. Then there is often the expense of bread if it hasn’t been donated, or at R5 a loaf or whatever. What we’ve tried to put down in the mission statement is if we have to cover the electricity and cost of labour and transport, a meal works out at around R3 a piece.

“It evolves every day,” he added.

The soups are intended to be as economically efficient as possible, which boils down to the veggie price at the market, explained Buchanan. “The bulk of it is potatoes – more than half – and a combination of butternut, pumpkin, which are a bugger to peel. You’ve got carrots and onions to add flavour, paprika, cumin and salt.

“We’re looking at other additives to increase protein value as well, like split peas and lentils that can be added at the soup kitchen. It’s an evolving process and each day seems to morph a little bit more as we get the model going. Blue Label has been amazing with donations of bread. We’re getting the bakery going at Olympia Café with seven tonnes of donated flour, and ultimately a piece of fruit which often comes from other donors. Then you’ve got a pretty wholesome meal for the person who arrives at the kitchen, community hall or NGO building.”

Conversations have been held with community members and the kitchen mamas who are used to receiving raw produce and cooking themselves. “The concern for the NGOs we work with – including Living Hope which has been around for 20 years – is that these individuals are going to run out of energy and resources,” said Buchanan.

“If we can be delivering the soup to them for distribution – which is what the model is based on – without them having to slave over pots for hours in advance, they could then put everything together, whether it’s adding split peas or protein. A bit of oil is also a good protein source we are looking at. Including deliveries, bread and fruit, we are that coal face liaison with the community.”

The soup kitchens themselves simply do not have the ability to produce as much as the breweries can, nor the necessary time to sufficiently feed the masses.

“We’ve got to get our soup in and out and be ready for the next delivery. We’re not standing around and handing to individuals, which is where the community interface is vital. The NGOs have built these relationships over the years, which is something we are relying on. It’s a case of consultation and communication with all those involved to find the ground that gets people fed.

“We’re already seeing hot spots of hunger and the desperate phone calls and people reaching out from townships and nodes we didn’t even know existed, so it’s obviously severe. We are juggling multiple balls and everyone is busier than they’ve ever been in their normal working life. Which is a fantastic distraction,” concluded Buchanan. DM/TGIFood

Visit the crowd funding page to watch a video, and to donate.