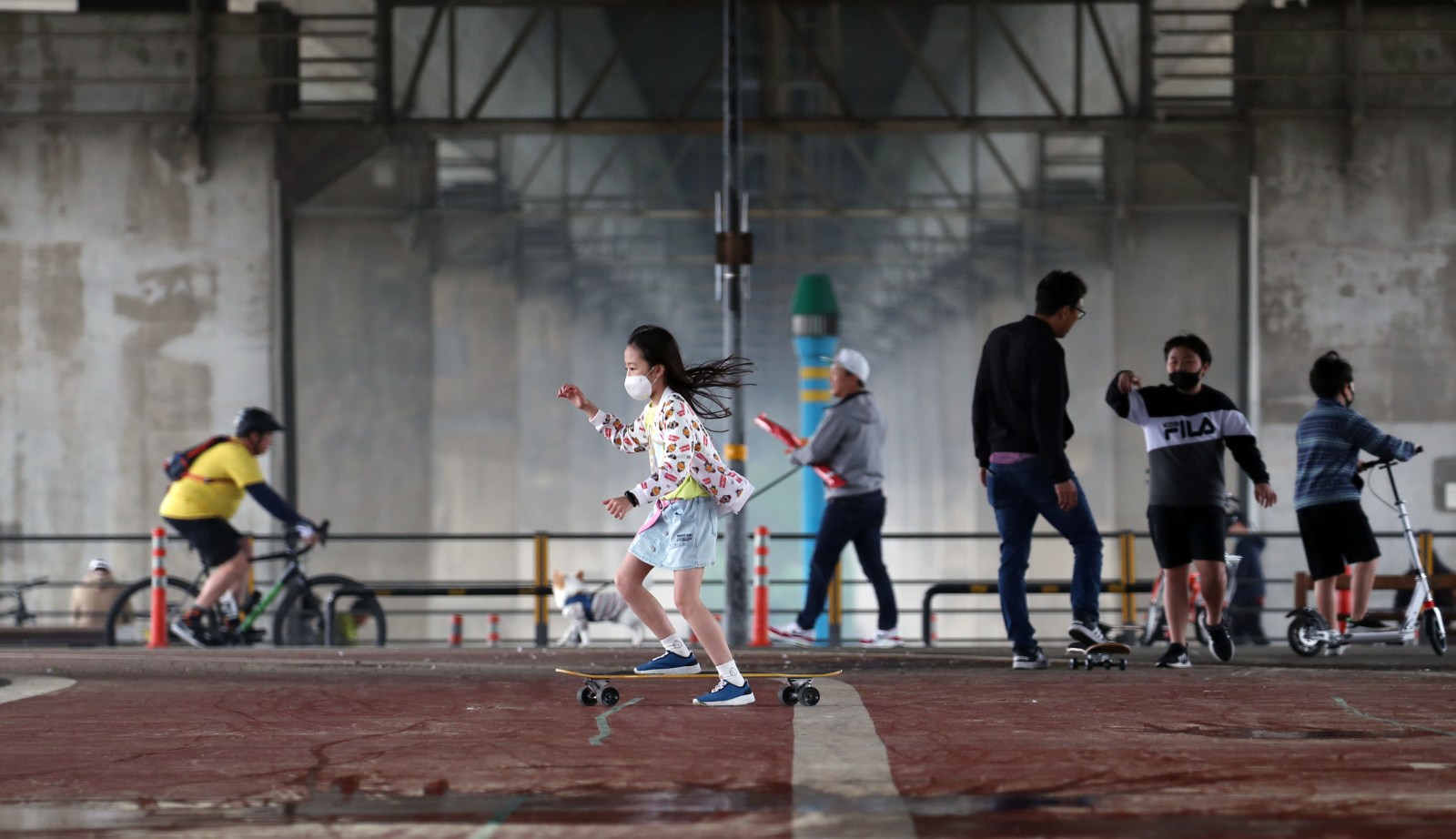 epa08412752 A child wearing a protective face mask rides a skateboard at Yeouido Hangang Park in Seoul, South Korea, 10 May 2020, the first Sunday since the government eased its social distancing measures over the coronavirus disease (COVID-19) pandemic. EPA-EFE/YONHAP SOUTH KOREA OUT

SEOUL, May 11 (Reuters) - South Korean officials scrambled on Monday to contain a new coronavirus outbreak, searching for thousands of people who may have been infected in a cluster of cases linked to nightclubs and bars in the densely populated capital city of Seoul.

The Asian country has been lauded for its quick action on the pandemic, significantly reducing the rate of new infections in recent weeks, but a resurgence in case numbers has raised concerns the country could be entering a second wave outbreak.

Officials reported 35 new infections across the country as of midnight on Sunday, the second consecutive day of new cases of that magnitude and the highest numbers in more than a month.

Twenty-nine of those new cases were linked to an outbreak at a number of Seoul nightclubs and bars, many of them catering to members of the lesbian, gay, bisexual, transgender and queer (LGBTQ) community.

That has raised complications for officials desperately trying to track those who might be infected in a nation where open homosexuality is often taboo and LGBTQ people still face discrimination, including job loss and hate speech.

Authorities have tested more than 2,450 people who had patronised the night spots in the Itaewon neighbourhood, but were still trying to track down around 3,000 more. Hundreds of other people who came in contact with clubgoers have also been tested.

“Our top priority is to minimise the spread of the infections in the greater Seoul area,” Prime Minister Chung Sye-kyun told a meeting with government officials on Monday, calling on local governments to work with police to track down patrons. “We should quickly find and test them, and speed is key.”

The outbreak has highlighted the potential unintended side effects of South Korea’s invasive tracing methods and wide public disclosure of some patient information as part of its approach to tackling the coronavirus.

Health Ministry official Yoon Tae-ho acknowledged concerns that individuals within the LGBTQ community could be outed against their will or face discrimination if they came forward.

“We release the movement of confirmed patients to encourage anyone who might be exposed get tested voluntarily,” he told a briefing. “We urge you to refrain from distributing patients’ personal information or groundless rumours, which not only hurts them but can also be subject to punishment.”

The Korean Centers for Disease Control and Prevention (KCDC) said 86 people have tested positive in connection with the Itaewon outbreak, which was made public on Friday, including people who had travelled to the capital and subsequently returned home.

Seoul mayor Park Won-soon pleaded with clubgoers to be tested, promising that personal information would be protected and warning that people caught evading testing could be fined.

“If Seoul was penetrated, the nation is at risk,” Park said, noting the city currently has around 700 of the nation’s 10,909 cases, which include 256 deaths.

The spike in cases comes just as the South Korean government was easing some social distancing restrictions and reopening schools and businesses. Official data released on Monday showed exports and imports suffered a precipitous decline in the first 10 days of May, underlining a bleak outlook for Asia’s fourth largest economy.

Seoul’s education superintendent Cho Hee-yeon issued a statement proposing delaying the reopening of schools, which was scheduled to begin on Wednesday, by one week in light of the new outbreak.

Technology firms Kakao Corp and Naver Corp suspended plans for employees to return to the office starting Monday, after two cases linked to the club outbreaks were reported at IT firm TmaxSoft, company spokespersons said.

TmaxSoft said on Friday it had shut down its office near Seoul and would test all employees for COVID-19.

The 69 cases reported by the KCDC over the past 48 hours were equivalent to the number of cases it recorded over the entire previous week.

Still, KCDC director Jeong Eun-kyeong said while the outbreak was worrisome, it was not appropriate to call it a second wave just yet.

“The epidemic is ongoing,” she said.