Botswana: Censorship is not the cure for Covid-19 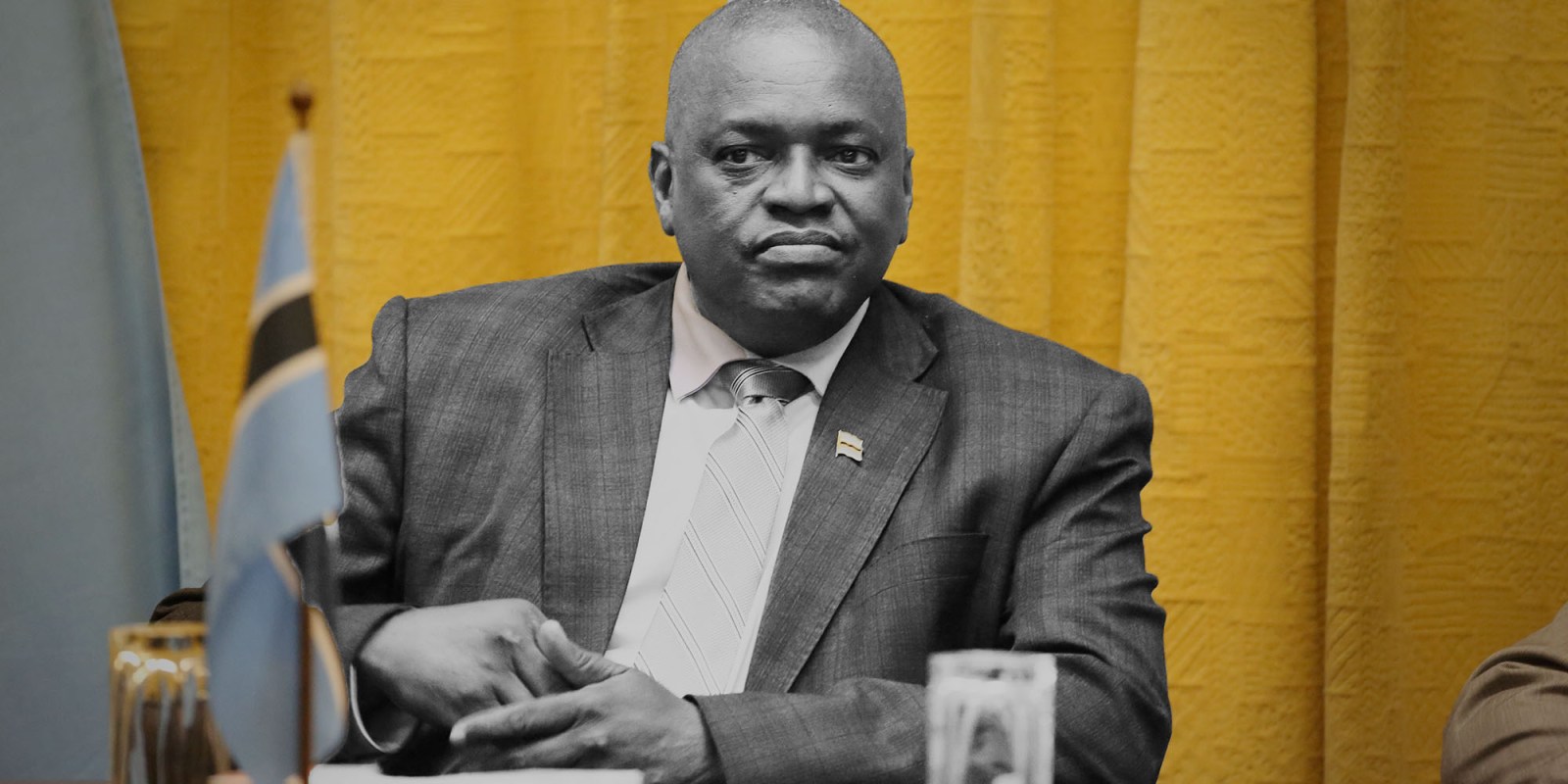 Botswana’s President Mokgweetsi Masisi has been accused of using the pandemic to crack down on critics and the media.

The glitter of Botswana’s “shining example of African democracy” is fading, as the country of 2.3 million people slowly slides towards authoritarianism.

The trend began under former president Ian Khama, who silenced critical media and cowed citizens into apathy. His term in office ended in April 2018.

Early indications that his successor, Mokgweetsi Masisi – vice-president for four years – had a penchant for intolerance was evinced in the run-up to the ruling Botswana Democratic Party (BDP) congress in April 2019 when he openly thwarted his rival, Pelonomi Venson-Moitoi’s incipient challenge for the party presidency.

The Covid-19 pandemic has led to further centralisation of power: Parliament recently passed an Emergency Powers Act that gives Masisi sweeping powers to rule by decree for a six-month period.

It was bulldozed through by the majority BDP in the face of opposition protests that putting power in the hands of one man would breed corruption and infringe on the powers of other branches of government.

As of Monday 23 April, Botswana has reported one death and 22 cases of people infected with Covid-19. The country has been placed under a 28-day lockdown, which ends on 30 April.

Masisi and his government have not been able to explain the need for a lengthy state of emergency, except to argue vaguely that the Public Health Act is too weak to enforce a lockdown.

One alarming provision of the president’s emergency powers is the introduction of a prison term of up to five years or a $10,000 fine for anyone publishing information with “the intention to deceive” the public about Covid-19 or measures taken by the government to address the pandemic.

Critics say the law, with broad and vague definitions, is a gift to authoritarian leaders who want to use the public health crisis to grab power and suppress freedom of speech.

Masisi’s backers argue that the law is needed as a deterrent. “It has become necessary to curtail some rights to prevent the spread of the virus,” said BDP spokesperson, Kagelelo Banks Kentse.

There are well-grounded fears that the emergency powers will be used to extend the government’s grip on supposedly independent institutions. Already there are concerns that the security forces are meting out heavy-handed justice in the name of enforcing the lockdown.

Two police officers in central Botswana are facing assault charges, while a schoolteacher was arrested after challenging the government’s claim that a health worker who screened lawmakers during a heated parliamentary debate on the state of emergency had tested positive for Covid-19.

On his Facebook page, the teacher also questioned why people infected with Covid-19 in hospital were not recovering or developing further complications.

“It takes five days for corona to manifest in its victim. We are in the 14th day of lockdown. Common sense says patients should be showing signs of infection,” said Rakkie Kelesamile.

Police say Kelesamile’s arrest is part of a larger effort to crack down on alleged “misinformation” under section 30 of the Emergency Powers Act. His lawyer, Kgosietsile Ngakaagae complains that the government is trying to criminalise the airing of opinions.

A police spokesperson, assistant commissioner Dipheko Motube, said that the three men had published an “offensive statement against the government” as well as “degrading and maligning the leadership of the country”.

“The interpretation of freedom of speech is wrong,” he said. “Making personal observations should not be criminalised.”

Days earlier, police had arrested Justice Motlhabane – the spokesperson of Botswana Patriotic Front, an opposition party with ties to former president Khama – for “degrading and maligning the leadership”.

The charges were labelled “worrying” by the Botswana Federation of Public, Private and Parastatal Sector Unions. The charges were not brought under the Emergency Powers Act, but the country’s Penal Code.

Motlhabane and Oratile Dikologang are accused of suggesting on a Facebook page, Botswana Trending News, that Masisi had declared a lengthy state of emergency “so that he could deal with his political rivals and business competitors”.

A police spokesperson, assistant commissioner Dipheko Motube, said that the three men had published an “offensive statement against the government” as well as “degrading and maligning the leadership of the country”.

Motlhabane, who is out on bail, denied the charges, saying he does not have access to the Facebook account. He told INK Centre that the police gave him electric shocks on several occasions, while demanding “certain information about a coup by the former president [Ian Khama]”.

“They placed a Taser on my buttocks and in between my thighs,” he claimed.

His lawyer, Biggie Butale, and president of Botswana Patriotic Front, insisted police do not have a case against his client.

“He is not the administrator of the Facebook account in question,” he said, adding: “Police never questioned him over Covid-19 – they asked him about a coup. You wonder what they are looking for.”

Several other people have been charged under the Emergency Powers Act.

A South African woman, Charmaine Ibrahim, appeared in court in Botswana on 27 March for alleging that two fellow South Africans in the country had tested positive for Covid-19. Ibrahim, 35, is out on bail.

A lawyer, Mboki Chilisa, commented on social media that there is no point in punishing innocuous false statements “which no right-thinking member of the public could ever believe”.

The emergency powers also risk worsening the already adversarial relationship between the government and private media. The Act prohibits journalists from using “source(s) other than the [Botswana] Director of Health Services or the World Health Organisation” when reporting on Covid-19.

Journalists who use other sources potentially face a fine of $10,000 or a five-year jail term. The executive director of the Media Institute of Southern Africa (Botswana chapter), Tefo Phatshwane, objected that the emergency prohibits independent journalists from holding those in power to account.

He said Masisi has started a “censorship pandemic”, using wide-ranging restrictions as a cover to violate freedom of expression.

“As journalists, we can’t rely on a government that we are expected to police,” he says.

If the coronavirus outbreak has taught us anything beyond the necessity of washing our hands, it is that its victim has been leadership. Bureaucracy and incompetence have made it difficult to trust the WHO and governments worldwide.

On 21 March, Masisi, who has a penchant for air travel, defied the lockdown to fly to Windhoek to witness the swearing-in of Namibian President Hage Geingob. He insisted the trip was essential to enable leaders to discuss strategies to combat Covid-19.

The government also botched the handling of the death of Botswana’s first victim of Covid-19. A local newspaper reported that the funeral of the elderly woman, from Ramotswa in the south-east of the country, was not handled in a manner consistent with guidelines for the burial of victims.

The government admitted days later that she had died of the disease.

It is tempting to demand prompt action to combat those who undermine national and global efforts to combat the pandemic through disinformation. But Nkgakaagae insists that censorship should not be part of the cure.

The government should identify the most efficient responses and communicate them to the public and allow reasonable and genuinely held opinions to flourish.

“Government has to engage the public in dialogue,” he said. DM

This article was produced by the INK Centre for Investigative Journalism in Botswana, in association with IJ Hub.