Some of the thousands of residents wait in a queue to be tested while healthcare professionals take a break during a local government mass testing deployment in Johannesburg’s Alexandra township on 27 April 2020. (Photo: EPA-EFE / Kim Ludbrook)

This Freedom Day, we have another opportunity to rebuild and recover South African society and the economy as fairer and more equal, was the message of President Cyril Ramaphosa’s address on Monday 27 April. He said:

Meanwhile, screening and testing have increased, according to Health Minister Zweli Mkhize during a Freedom Day briefing to Parliament’s health committees. There have been more than five million people screened for Covid-19 to date, and 168,643 tests have been conducted.

On Sunday, there were 4,546 Covid-19 cases in South Africa. In total, there are 317 Covid-19 patients in hospital. Of that, 42 patients are in intensive care and 23 in high care. The briefing provided specific numbers. Marianne Merten provides an overview. 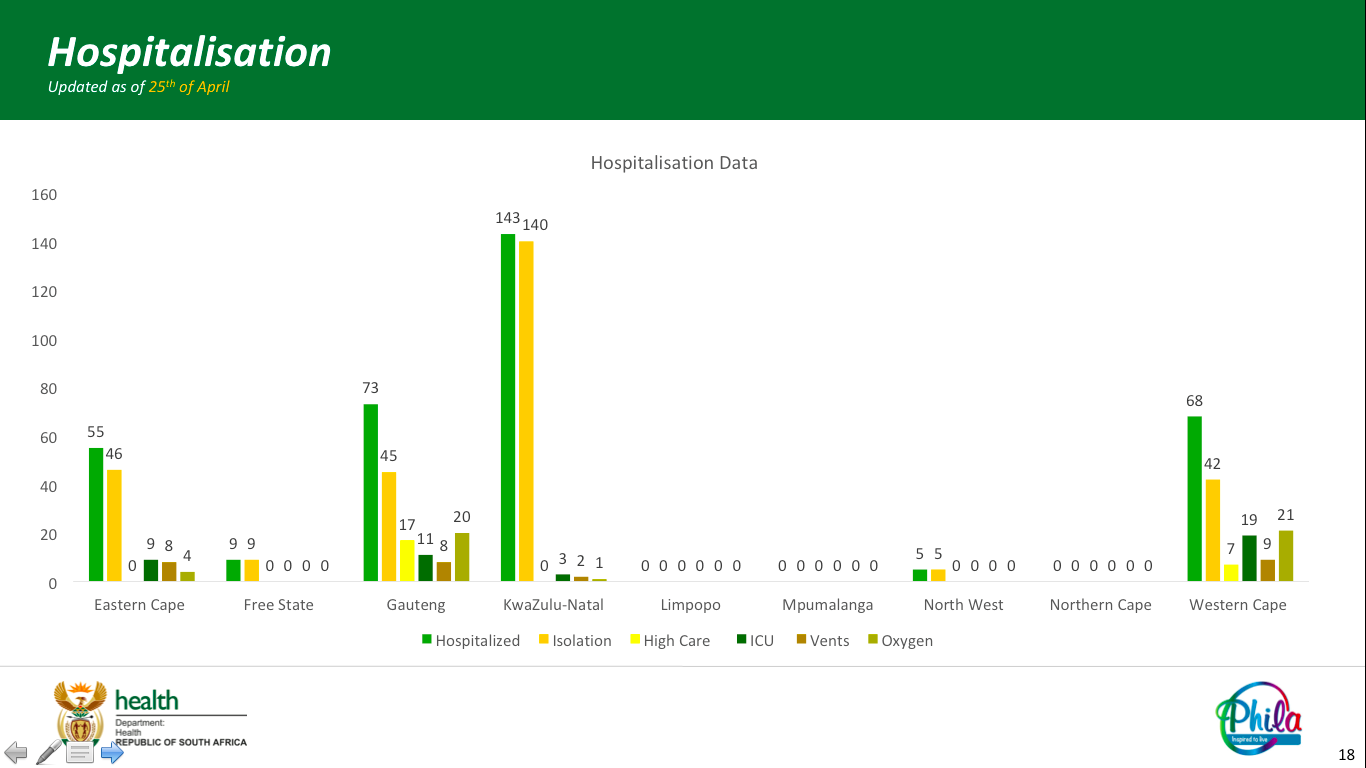 As the figures show, the Western Cape is proving to be the epicentre of the epidemic in South Africa. Over the weekend it was announced that there are 56 police officers in the province who have tested positive for the virus. Several police stations have been placed under 48-hour lockdown to decontaminate the stations and have had to move operations. As Vincent Cruywagen reports, this is while gang warfare sparked again in Manenberg and Hanover Park.

The Western Cape legislature discussed protests, looting and hunger in the province on Friday, 24 April. As Suné Payne reports, the committee came together to try to understand the state of food security in the province, with a focus on the supply chain and access to food.

On Saturday, more details of what a lockdown level four looks like were announced. People can exercise outside of groups, takeaways can be ordered and delivered and winter clothes, cigarettes, stationery, heaters, blankets, educational books, laptops and cellphones can be sold.

In addition, interprovincial travel remains banned unless it is to return to work or school or to attend a funeral. It is now mandatory for people to wear cloth masks when they leave home, and recycling centres will open again. This does mean waste pickers can return to work. Estelle Ellis rounds up the rest of the new relaxation of restrictions. 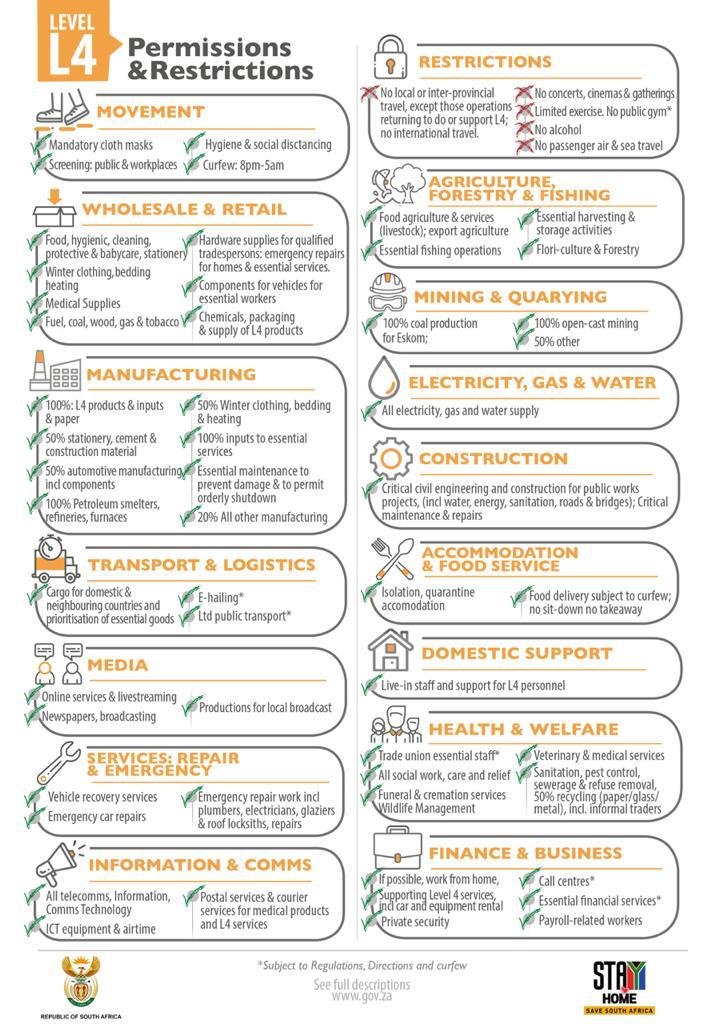 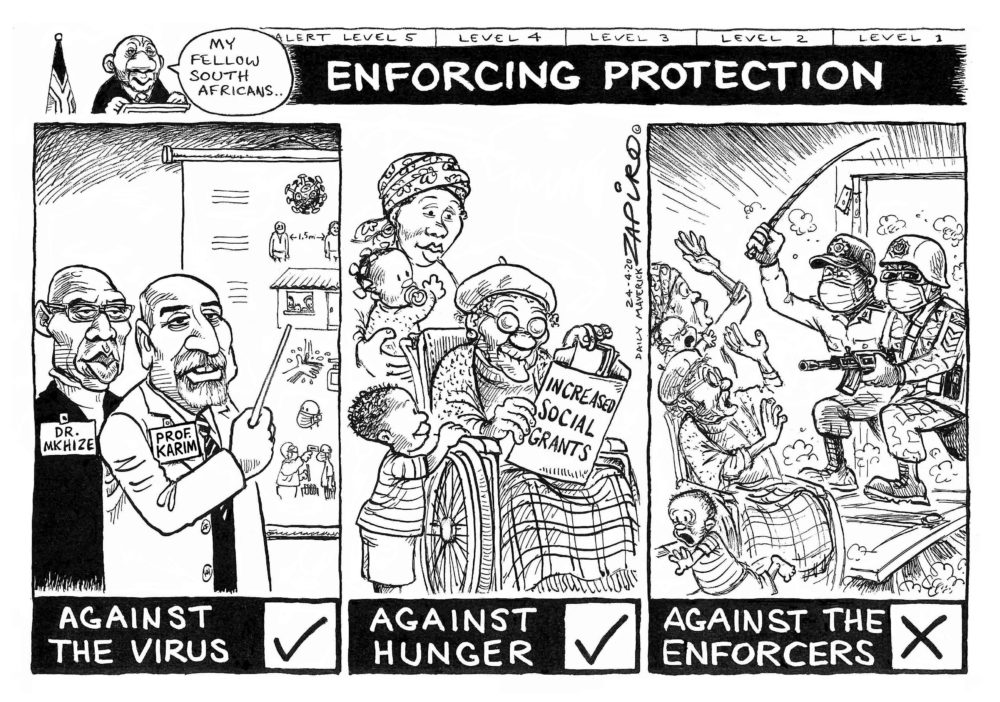 Minister of Co-operative Governance and Traditional Affairs Dr Nkosasana Dlamini-Zuma said at the Saturday briefing that an announcement about the reopening of schools would be made on Monday 27 April. However, this was postponed indefinitely after teacher unions expressed concern over health and safety measures if schools were to reopen under level four. Ayanda Mthethwa spoke to trade unions about their apprehension.

Meanwhile, South Africa’s 717 professional rugby players finalised a deal with their employers through the MyPlayers trade union over the weekend. It has been agreed that if no further rugby is played in 2020, the players will contribute 12.5% to the proposed R1-billion in industry budget cuts. Craig Ray reports on the terms of the agreement.

The first bulk order of masks and respirators arrived at OR Tambo late on the evening of 23 April. This delivery was secured by a new centralised partnership to procure personal protective equipment on behalf of all hospitals in the country. This first shipment contained two million surgical masks and 216,000 KN95 respirators. There are hundreds of thousands more to come. Estelle Ellis writes on how this partnership came to be. DM