Earth Day message: Nature has not unleashed her full might yet — indigenous healers 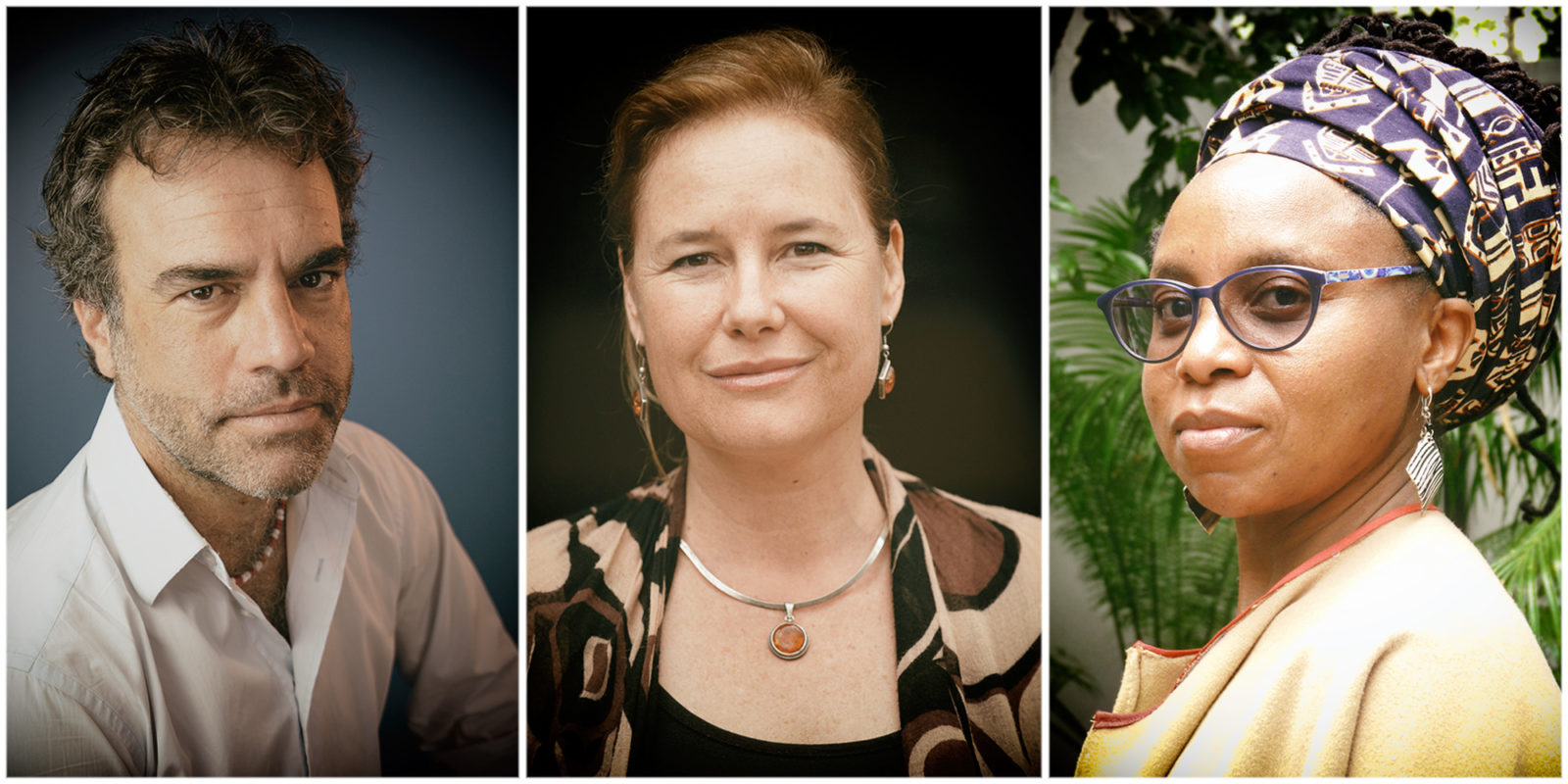 Nature has held its breath since the first Earth Day protests this week 50 years ago, Our Burning Planet’s Kevin Bloom told some 500 viewers participating in Tuesday’s Daily Maverick webinar lockdown series. Entitled ‘Earth Day: Nature and Societal Reset in the Age of Covid-19’, the webinar was held to mark the global environmental event.

“By one measurement, Earth Day failed. It did not unite. Its demonstrators were predominantly young, predominantly white, predominantly anti-Nixon,” CBS anchor Walter Cronkite intoned about the liberal young Americans railing against planetary collapse in that heady year of 1970s activism.

Not much has changed in environmental protest culture — led by Swedish youth activist Greta Thunberg, pro-planet action is still largely driven by liberal youths, although, in 2020, this movement is arguably more multiracial and certainly more global than it was a half-century ago.

Earth Day 2020’s watermark, however, was distinctive — and this time it was not about the number of activists on the streets. It was about the billions of people who stayed inside, Daily Maverick webinar participants heard in a conversation between Our Burning Planet senior journalist Kevin Bloom, white lion campaigner Linda Tucker and Credo Mutwa Foundation chair Rutendo Ngara.

“This is pretty much the first Earth Day ever where we’re seeing nature reclaiming her dominion. We’re seeing levels of pollution in the skies that are lower than they’ve been in decades,” he said. “We’re seeing our waters clearing up. We’re seeing the return of our marine wildlife. We’re seeing soils regenerate.”

Or, as the South African conservationist Andrew Muir posted on his Facebook page in late March 2020: “I feel like Nature has sent us all to our rooms for being a**holes.” Muir is the CEO of the Wilderness Foundation Africa, a conservation group working out of the Eastern Cape.

Either way, the webinar panellists agreed: Nature is rising, somewhat phoenix-like in fits and starts, against the “black swan” backdrop of the Covid-19 pandemic. Was this opening a chink towards a new reality, or a second chance (or a millionth one)?

It was, at the very least, an invitation to our species, Homo sapiens, to reset our relationship with the Earth, the panellists said — especially if we recognised the interrelated history between disease outbreaks in humans and the fragmentation of wilderness. This unnatural phenomenon was placing us in unprecedented contact with naturally occurring pathogens to which humans had developed no immunity — and so, we also needed to reframe conservation policies with indigenous-knowledge systems in mind.

“Resilience is the key quality of nature. If we look at the white lions as a radiant example — they’ve been forcibly removed from their natural kingdom over a documented period of decades through trophy hunting, extraction into zoos and circuses, and the notorious ‘cuddle-to-kill’ death camps in South Africa,” said Tucker. Through her eponymous foundation, Tucker has rewilded white lions, securing protected heritage in the Unesco Kruger-to-Canyons Biosphere. “And yet, after all this, white lions keep recurring in their place of origin, because there’s a reason for their occurrence that indicates a higher intention than anything humanity can interfere with.”

A brand of spoken-word poetry is the former fashion model’s natural habitat: The white lion school of thought has its detractors. Not everyone agrees, for instance, that African lions with a recessive gene, which can make them highly visible in their near-whiteness and perhaps more vulnerable to competition, ought to be encouraged — or so the argument goes.

In his Our Burning Planet August 2019 report about an international gathering in the Timbavati white lion reserve on indigenous sacred sites, Bloom offered a different perspective: “The lions of Timbavati exerted their influence through a scientific discovery known as ‘trophic cascading’, a process whereby each subordinate layer of the ecosystem benefited from the presence of the capstone animal.” According to the lion ecologist Jason Turner, a “classic example was the North American wolf, which after its reintroduction to Yellowstone National Park in 1995 had restored the entire ecosystem, down to the path and flow of the rivers”.

The webinar stage in its perfunctory drabness seemed to love Tucker’s persuasive charisma, expressed in the powerful mythological language associated with her “inheritance” as an indigenous healer. Nature has always had “fundamental control because this is a divine inheritance we as humans are intended to respectfully steward. Of course, we’ve done the reverse, we’ve been highly disrespectful, we’ve not stewarded this sacred heritage, we have virtually nothing to hand over to future generations”, she told her fellow panellists and the audience.

She cautioned, however, that “nature certainly hasn’t yet taken dominion in a way that is destructive for humanity. If you think the most recent fatality records of the World Health Organisation indicate that there’ve been around 200,000 fatalities [the figure at the time of writing was around 175,000] through the coronavirus … Well, bear in mind that in the year 2004, one tsunami in Indonesia killed more than that in a couple of hours. Likewise, the Haiti earthquake in 2010 removed more people. We haven’t begun to see nature’s dominion yet.”

Acknowledging Covid-19’s tragic fatalities, Tucker said the global slowdown was nonetheless a “beautiful opportunity” for humanity to “go within and learn graciously the lessons we are capable of learning through nature’s guidance”. Her head framed by a halo of white lion portraits, she rattled off those lessons: “Lessons of respect, lessons of community, lessons of, you know, understanding what it means to be confined. We’ve confined, you know, virtually every animal in the most inhumane conditions.”

While diving into metaphysical subjects inherent to African indigenous knowledge, and placing the pandemic in this context, Bloom did not give airtime to conspiracy theories, such as unsubstantiated rumours that the virus escaped from a lab, or that it was spread by 5G technology. Instead, he spotlighted the rise in zoonotic diseases as the pandemic’s most likely cause: These are trends borne out by decades of scientific data, such as a 2016 UN Environment Programme report on diseases that pass between mammals.

“Researchers studying records that date from 1940 to 2004 detected an increase in the rate of emerging infectious disease over those years. Of the 335 documented events, 60.3% were zoonotic and 71.8% of the zoonoses originated in wildlife,” the report said. Livestock, “bred for production characteristics rather than disease resistance”, was also an epidemiological “bridge”.

The report added an extraordinary caveat: “On average, one new infectious disease emerges in humans every four months.”

For her part, co-panellist Rutendo Ngara viewed zoonotic transmission as a gauge that we humans had “lost our ability to know how to be in a right relationship with the natural world”.

As the chair of the Credo Mutwa Foundation, Ngara’s words held prophetic weight. Baba Credo Vusamazulu Mutwa, wrote Bloom last month, was “the great sanusi of South Africa and the author of many classics of indigenous literature”. He died, aged 98, the day before South Africa went into lockdown.

She described a recent encounter with an indigenous elder she had met during her Zimbabwe travels — and he had “an interesting answer” about the cause of the global slowdown. The elephants no longer passed by and gave us messages, said Ngara. And the elders were no longer allowed to go to the sacred sites to do ceremonies.

“In our Western paradigm, we would not see the link … this idea that causality from elephants passing by, and the elders not being able to do ceremonies at sacred sites, would lead to shutdown and mayhem,” said Ngara. Also a “high initiate” indigenous healer, as Bloom described her, Ngara straddled worlds through her degrees in electrical engineering and biomedical engineering, and through her studies towards a doctorate in philosophy of education.

Before the invention of the mechanical clock in the 13th century, humans were  “midwives to nature”, she said — then time became a thing to be controlled, a rulable thing to waste or to rush.

“We are not a part of nature, we are apart from nature,” she observed, urging a return to the “sacred sites of time immemorial” revered by indigenous elders — to accord nature the mystery and awe once fostered by places such as the Pyramids of Giza, or the Iron Age city of Great Zimbabwe.

Responding to questions from participants on how humanity might emerge from this unprecedented crisis with a renewed worldview and identity, Ngara quoted the Burkina Faso writer, Malidoma Somé, who spoke in the metaphor of indigenous wisdom.

“As with any initiation, the fear of the unknown is more deadly than what is known. At times like these, we must invoke our medicines, our collective gifts and imaginations to stop the spread of fear and insecurity,” she read. Humanity had “read the crisis plaguing the world from the perspective of our human genius, and its capacity to respond to our turmoil wisely”.

Ngara depicted something of an “unshopping” list for the spirit: “Before we think of any global movement, the movement we should be thinking about is the movement within …We have been pushed to go right down to basics — the things you cannot go shopping for.”

Well known as a campaigner for lion welfare, especially those animals kept in the controversial canned-hunting industry or farmed for their bones, Tucker expressed frustration that the South African government “seemed okay with the fact that this [industry] is legally protected. And I have to say that our government seems hellbent on that programme, which has recently converted 32 species, including lions and cheetah, into farm animals using the terminology of ‘faunal-biological resources’. You know, it’s a completely different consciousness from the one that Rutendo is describing which holds the indigenous consciousness of service to our planet.”

Tucker was referring to the Animal Improvement Act, which renders wildlife such as lion, cheetah, rhino and giraffe as farm animals subject to manipulation and consumption. A North Gauteng High Court judgment in August 2019 deemed canned lion hunting to be “abhorrent and repulsive”.

Suggesting that political authorities were not sufficiently equipped to act as informed stewards of planetary heritage, she said: “We actually have to educate our so-called authorities, their way of dealing with our inheritance is unacceptable.”

The “most scientifically responsible research” had traced the pandemic to “these appalling markets, which bring living wildlife into desperately inhumane conditions and slaughter them. There is no logical rationale to do so.”

Here Tucker, the glamorous beauty turned indigenous healer, famously outspoken, had the final say: “I remind us all that there is no logic unless it’s eco-logical. After all, this is our planet.” DM