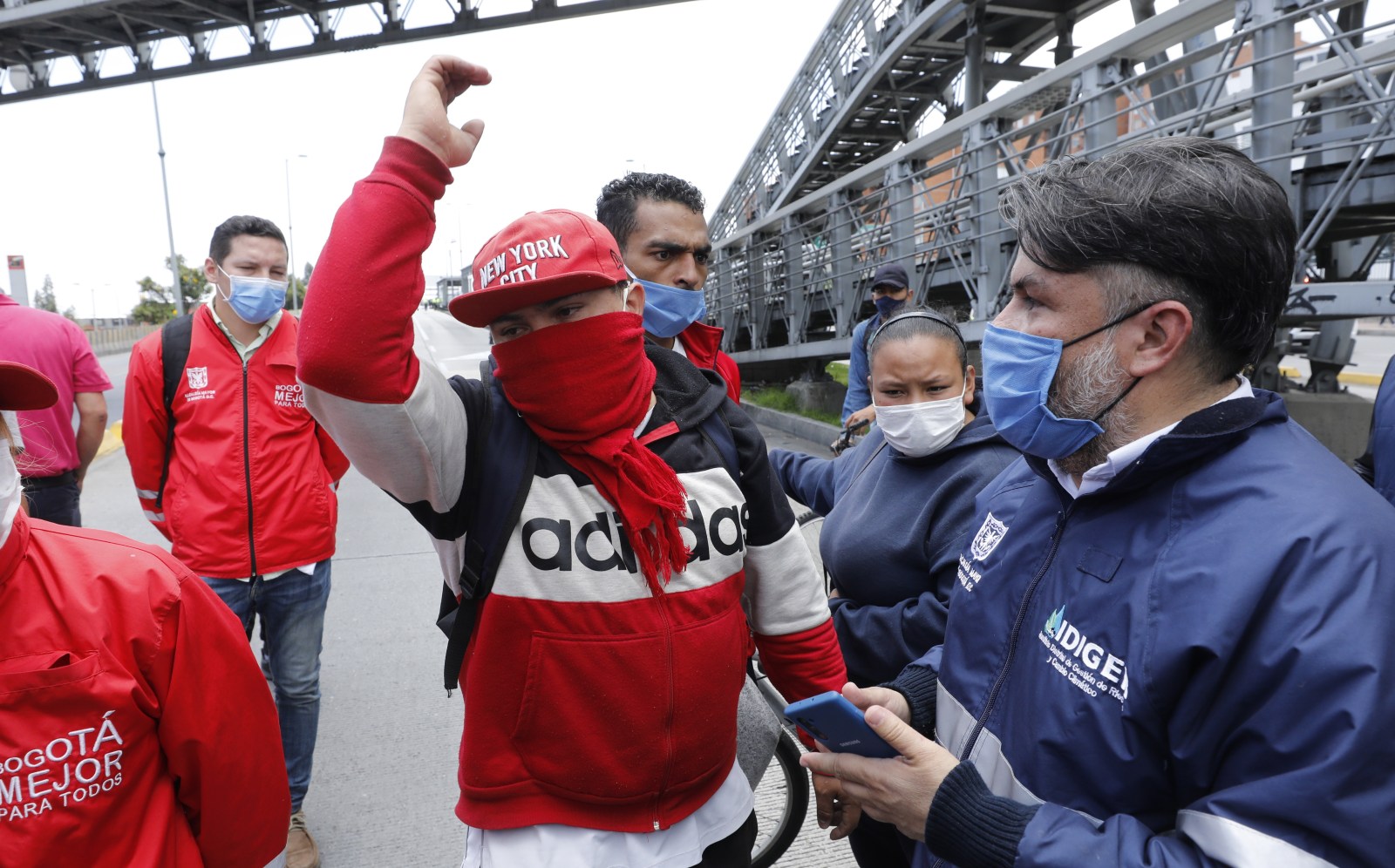 epa08365317 A group of citizens break the national quarantine to go out and protest, in Bogota, Colombia, 15 April 2020. Despite the fact that the coronavirus quarantine is in force, dozens of Colombians demonstrated in a sector of northern Bogota to make a specific request to the authorities: to donate food or allow them to work. The national quarantine was extended until 26 April by order of the Government. EPA-EFE/Mauricio Duenas Castaneda

BOGOTA, April 16 (Reuters) - Residents in poor parts of Bogota, the Colombian capital, blocked roads on Thursday to demand authorities make good on promises of aid so they can survive a national quarantine designed to stop the spread of the coronavirus.

The quarantine, now in its fourth week, is set to last until April 27.

President Ivan Duque and Bogota Mayor Claudia Lopez have announced millions of pesos worth of aid for the poorest members of society who lost their income due to the lockdown.

Yet residents in the south of Bogota, which has a population of about 7 million people, said they still have not received any assistance. Many are going hungry because they cannot work in their usual informal jobs.

“We are protesting because the aid hasn’t arrived. There are elderly, handicapped and children. This is a peaceful protest,” said Paula Andrea Quimbay, 23, who lives in a mountainside neighborhood where people blocked roads with stones.

The government of Bogota has agreed to spend $55.6 million on healthcare, cash subsidies, food vouchers and shopping deliveries that have benefited more than 1 million families. But Lopez recognized delays in delivering help.

In the nearby neighborhood of La Colombianita, protesters built barricades with large trash bins and burning tires.

Lopez said some politicians, whom she did not name, were promoting the protests, but warned she would not be pressured by those who want to take advantage of the situation to push the mayor’s office into delivering aid to those politicians’ followers.

“In this time of need Bogota will not return to politicking and clientelism under any circumstance, we aren’t going to give into this pressure,” she said, adding that aid would reach residents without any political interference.

There was an attempt to loot a supermarket during the protests, said city police commander Oscar Gomez Heredia, requiring intervention by the feared ESMAD anti-riot police, who used tear gas to disperse the would-be vandals.

Protesters in the Brisas del Volador neighborhood denied being pressured by politicians and called for immediate aid.

“Please, help us, nothing has been resolved. We are forced to go and collect food that other people throw away,” said a tearful Juan Carlos Rivera, 31, who earned a living by washing cars before the quarantine. “Does that seem fair? It’s not.” (Reporting by Luis Jaime Acosta Writing by Oliver Griffin Editing by Leslie Adler)