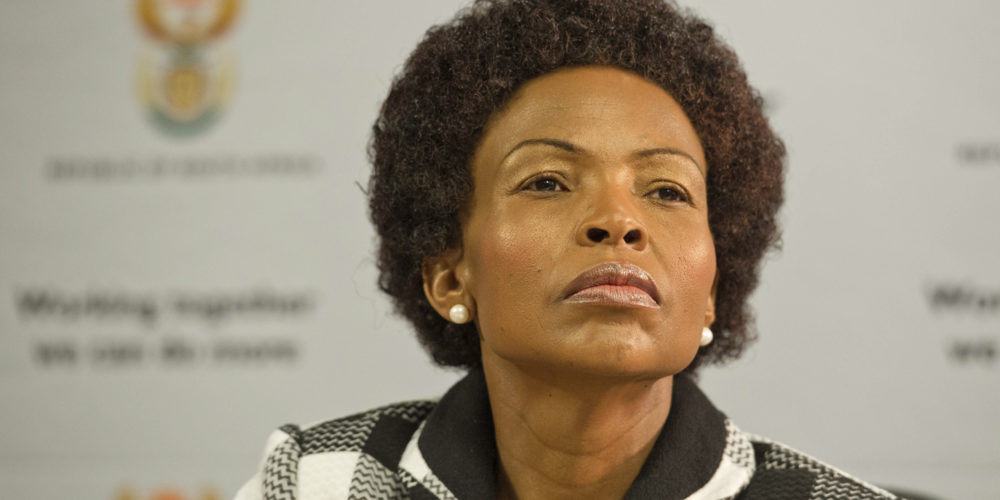 The department of Women, Youth and Persons with Disabilities hosted a webinar this week to unpack how the global pandemic continues to have a disproportionate effect on women. What was highlighted during the dialogue was the need to find solutions to problems that existed before Covid-19.

The Minister for Women, Youth and Persons with Disabilities, Maite Nkoana-Mashabane, called the issue of gender-based violence (GBV) during the lockdown a “shadow of a pandemic”.

This comes after it was revealed last week (8 April) that the government’s GBV Command Centre had received 2,300 calls and complaints since the day after the lockdown began (27 March) up until 31 March.

Nkoana-Mashabane hosted a webinar on Wednesday to discuss how the Covid-19 continues to have an excessive impact on vulnerable groups, such as women and children.

The department aims to find interventions and solutions that will be used at community level.

“Women carry the burden of care in our communities and in a state of lockdown where many of them fight for survival because now they are locked down with their perpetrators,” Nkoana-Mashabane said.

“We have seen shocking numbers from the first week of the lockdown.”

A key issue raised in the dialogue was that the pandemic has increased the need for shelters – of which there is a shortage – for women experiencing GBV.

“We do not have the shelters to deal with this pandemic,” Nkoana-Mashabane said, after reporting that there had been an increase in calls from victims requesting to be placed in shelters.

Dr Zubeida Dangor, from the National Shelter Movement, stated that a pre-existing issue with shelters was that many have yet to receive government funding.

“Many shelters in many provinces have not received their funding for the 2020 financial year and this puts them in dire difficulty to be able to serve the women and children,” Dangor said. “From feeding them, to having medication, to having PPE [personal protective equipment] to provide to them.”

Advocate Brenda Madumise, the co-chair on the Interim Steering Committee on GBV, said the department will try to find places that can be used as shelters for women.

“We have received individuals who have boutique hotels or they have got their centres where they can make space available to use as shelters,” Madumise said, “but we are looking at that and how that information can be communicated for those who need shelters.”

There are just over 130 GBV shelters across SA, according to a directory provided by the department of social development.

Dangor said there needs to be a strategy to find ways for women to access these shelters, as a victim of GBV who is stuck at home with a perpetrator during lockdown may find it difficult to leave.

“Shelters are open and are able to receive women who are experiencing gender-based violence,” Dangor said.

“However, what we need to understand is that the lockdown actually holds women in captivity. Generally speaking, women are already isolated by their partners as a way of preventing them from seeking help.”

Madumise also noted that since the lockdown there have been incidents of violence against women at shelters for the homeless.

In December 2019 during the Public Investigative Hearings into the status of shelters in South Africa, the Commission for Gender Equality (CGE) concluded that there are deeply embedded systemic and structural fissures in the state that are undermining the ability of its departments to assist shelters and ultimately women and children who are victims of abuse.

Aggravating these issues was the fact that children who are being subjected to violence, especially during the lockdown period, are most at risk as some children don’t have any way to notify others when they are in distress.

Dr Shaheda Omar, from the Teddy Bear Clinic for abused children, said that the “violence against children is a hidden crisis of Covid-19”.

There had been 44 reported cases of violence against children reported to the clinic since the lockdown was implemented on 27 March.

Cases have ranged from physical to sexual abuse and the perpetrator is generally someone close to the child.

“But… home is actually a place of danger rather than safety where many children are locked in, trapped and immobilised and shut out from the rest of the world.”

“The relationship between the victim and the perpetrator is generally someone who is closely connected or related to the child or someone who lives in the confines of the home environment,” Omar said.

Omar said that in many of the cases it is difficult for children to physically call for help as many of them do not have cellphones.

“Having online safety platforms is not always practical,” Omar said.

“We have spoken about neighbourly support where we talked about what kind of sounds they could make if they were in distress. We are also looking at the whistle where if anyone hears a whistle they know that that’s a child in distress.”

Other pre-existing problems highlighted at the webinar included delays in getting through to the GBV Command Centre, and victims feeling that police officers were not equipped to deal with GBV.

“We know that what we are dealing with is uncharted territory because of covid-19,” Dangor said. “This means that we are experiencing several challenges but many of these challenges were there prior to the Covid-19 pandemic.” DM