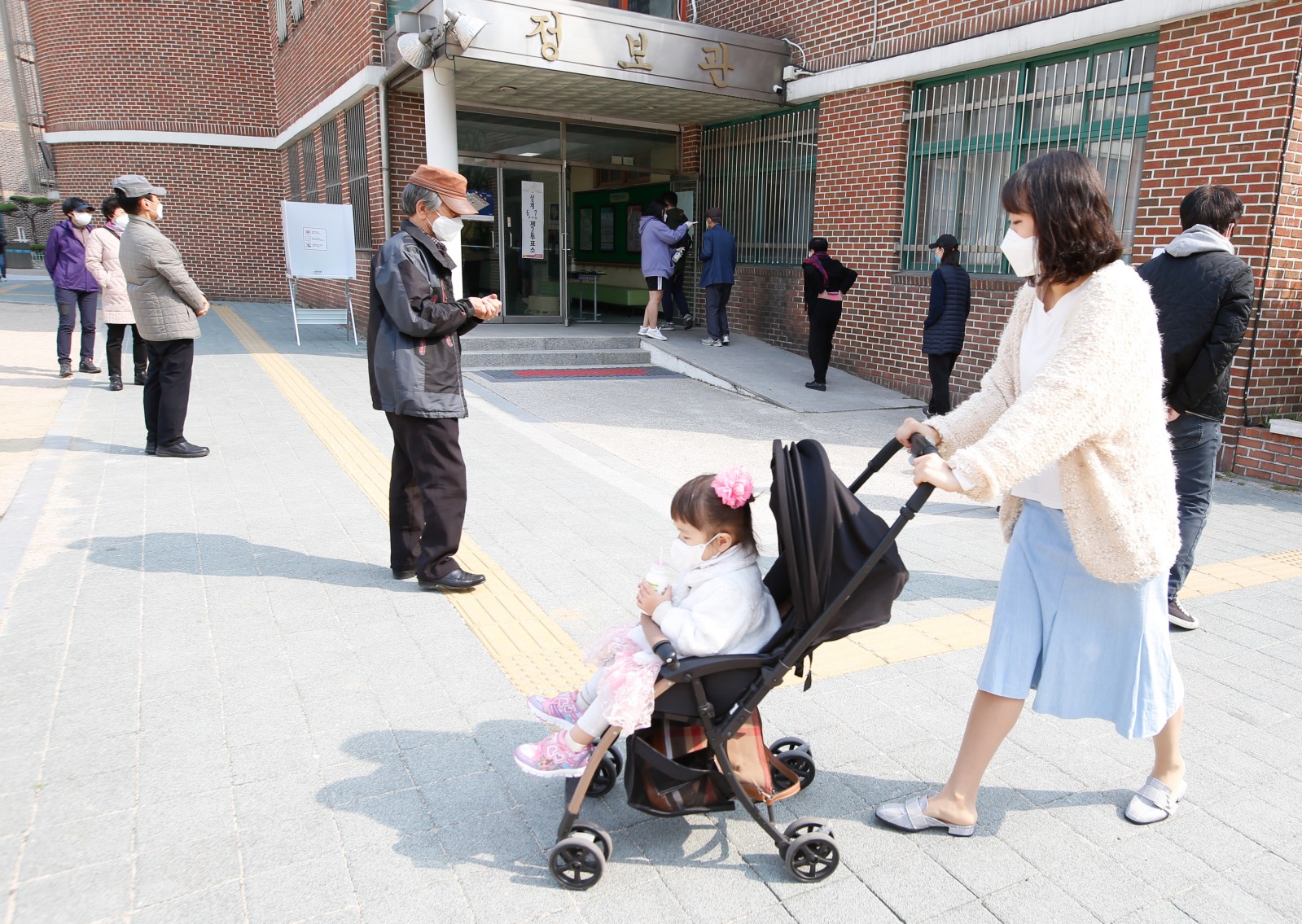 epa08363355 A South Korean voter pushes her daughter in a carraige while waiting in line to cast ballots, while maintaining social distancing at a polling station in Seoul, South Korea, 15 April 2020. South Korea is holding general elections to choose 300 lawmakers for the country's National Assembly. EPA-EFE/KIM HEE-CHUL

SEOUL, April 15 (Reuters) - South Koreans began going to the polls on Wednesday to elect members of parliament, wearing masks and plastic gloves as part of strict safety measures in one of the first national elections held amid the coronavirus pandemic.

About 14,000 polling stations were open at 6 a.m. (0900 GMT) around the country after disinfection, and voters were required to wear a mask and have a temperature check upon arrival. Anyone whose temperature was higher than 37.5 Celsius (99.5 Fahrenheit) was led to a special booth.

All voters must use hand sanitizer and plastic gloves when casting ballots and maintain 1 metre (40 inches) distance between each other.

The election is set to decide control of parliament and shape President Moon Jae-in’s ability to push through his agenda in the final two years of his administration, including looser fiscal policy aimed at creating jobs, raising the minimum wage, and continued re-engagement with North Korea.

Globally, South Korea was one of the first countries to hold a national election since the coronavirus epidemic began, while many others postponed votes.

“I had worries as the election was not delayed, but having come here and seen for myself, I felt it’s good we did vote as planned, and people are taking greater caution about distancing and restraining themselves even more,” Choi Sun-hwa, 56, told Reuters outside a polling station in Hongje-dong, central Seoul.

Once grappling with the first large outbreak outside China, South Korea has largely managed to bring its cases under control without major disruptions thanks to a massive testing campaign and intensive contact tracing.

The Korea Centers for Disease Control and Prevention reported 27 new coronavirus cases on Tuesday, bringing the total infections to 10,564. The daily tally has hovered around 30 over the past week, most of them from overseas travellers.

But authorities have warned that infections could resurge at any times, calling for special caution on Election Day.

As of 9 a.m. (1200 GMT), voter turnout was 8%, about 0.9% points higher than in the last parliamentary election in 2016, according to the National Election Commission. That excludes nearly 27% of the 44 million registered voters who took part in early voting last weekend.

Among them were about 2,800 coronavirus patients, for whom the NEC allowed voting by mail and set up special polling stations for early voting.

The election campaign has taken on a different look, with candidates wearing masks and bumping fists instead of pressing the flesh and mass rallies. (Reporting by Hyonhee Shin; Additional reporting by Minwoo Park; Editing by Gerry Doyle)