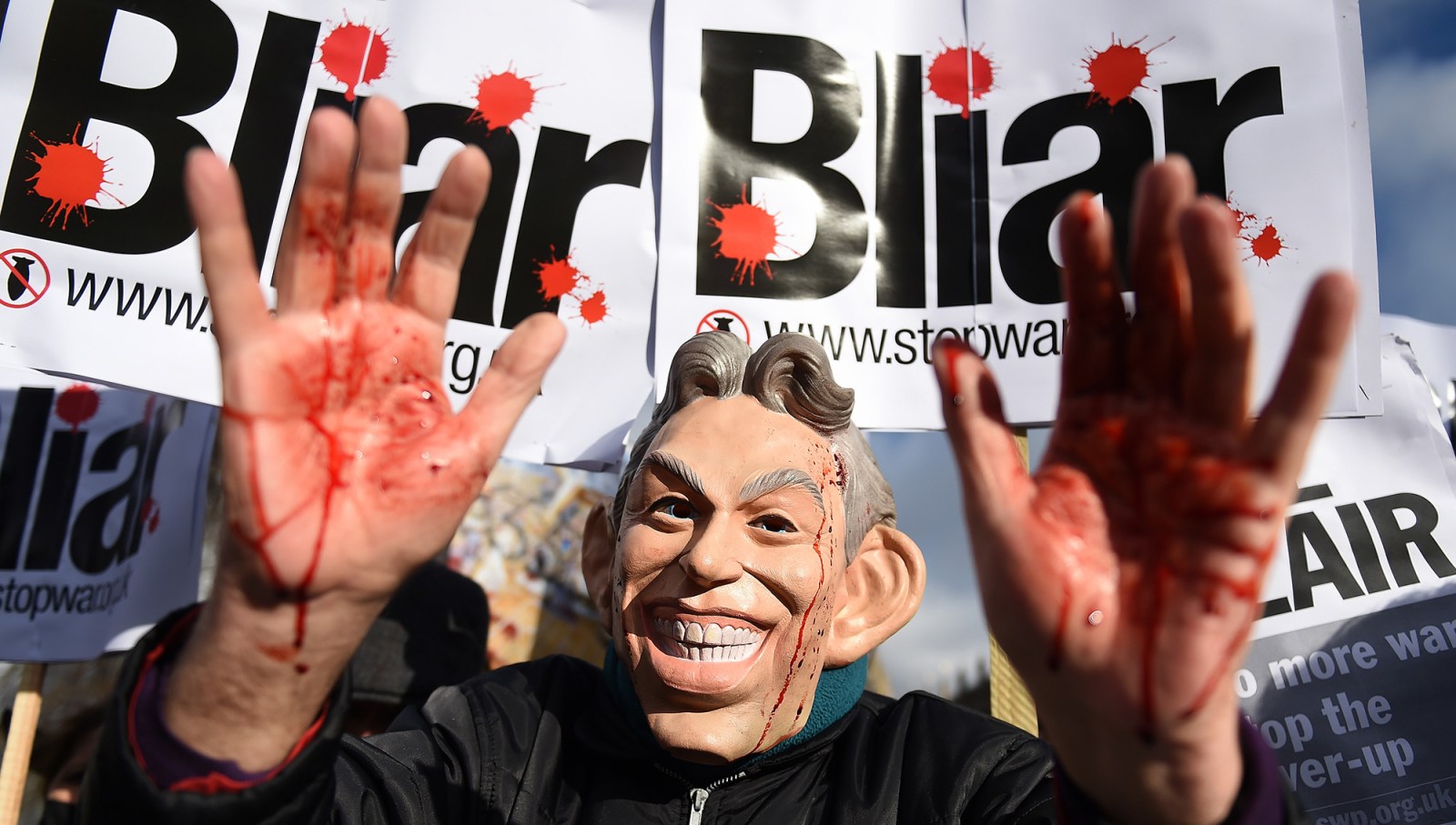 Anti-war activists in London demand the release of an inquiry into the Iraq war (Photo: EPA/Andy Rain)

A leaked report appears to show evidence that some of the most highly-paid Labour Party staffers wanted their party to lose the UK general election in 2017, and that they actively campaigned against anti-war activists within the party.

Labour Party staff opposed to Jeremy Corbyn compiled a secret blacklist to deny or revoke membership of the party to those criticising “war criminals”, a leaked document shows.

Scores of internal emails and WhatsApp messages show that party officials were hostile towards new members who came from Britain’s anti-war movement. Some party officials also relished public criticism of Corbyn’s support for nuclear disarmament and wanted him to blame immigration for a terrorist attack.

Labour saw its membership surge from 2015 to 2017 as anti-war activists rallied around the party’s newly elected leader, veteran left-winger Corbyn, who pledged several foreign policies that would have challenged the British establishment had he become prime minister.

But an 860-page report titled “The work of the Labour Party’s Governance and Legal Unit in relation to antisemitism, 2014-2019”, reveals that party officials were engaged in factional feuds and even corrupt practices to undermine Corbyn.

Corbyn opposed the decision of then Labour prime minister Tony Blair to invade Iraq in 2003 and eventually won a leadership contest in 2015. His unexpected rise to the top triggered a backlash from unelected party officials and right-wing Labour MPs who remained loyal to Blair’s pro-war policies, passing a vote of no confidence in Corbyn in June 2016.

The leaked report shows that hawkish figures in the party then used disciplinary powers to expel Corbyn supporters from the membership – and stop more joining – to reduce his chances of winning another leadership ballot scheduled for later in 2016.

In one case, party officials prepared for the publication of Sir John Chilcot’s inquiry into the Iraq war by anticipating that Corbyn supporters would criticise Blair’s legacy. A day before Chilcot’s report was released on 6 July 2016, a Labour Party official asked a colleague in an email: “what’re we expecting post chilcot [sic] lots of abuse at pro war mps? an influx of anti-war angry people?”

His colleague, a compliance officer, replied: “I have no idea, but I can’t imagine it will be good.”

The Chilcot report found that Blair had deliberately exaggerated to MPs the threat posed by Iraq when he sought parliamentary approval for the invasion. Corbyn responded to the report by describing the invasion as an “act of military aggression” which “the overwhelming weight of international legal opinion” regarded as illegal.

Some Labour party staff then secretly added the term “war criminal”, a common description of Blair, to an unofficial list of “banned phrases”. People found to have used such terms – which also included “undercover blairite” and “pseudo Tory” – would have their membership denied or revoked.

Officials planned to scan through social media posts by new members after the Chilcot Inquiry was published to identify anyone using the proscribed terms.

The vetting escalated on 18 August 2016 when a compliance officer stated that “calling someone a warmonger” was “generally … enough in itself” to act against members.

Although these manoeuvres failed to stop Corbyn winning the second leadership election in September 2016, the conduct of party staff during this period is back in focus after the internal review was leaked on Sunday.

The review revealed the existence of the blacklist and warned that the party’s legal unit “did not have any instruction or mandate” from Labour’s elected leaders “to specifically search for ‘abuse at pro war MPs’ from ‘anti-war angry people’.”

It added: “We are not aware of any similar interest being displayed in abuse at ‘anti-war MPs’ or from ‘angry pro-war people’.”

Reacting to the revelations, Sam Tarry, Labour MP for Ilford South in east London, told Declassified: “Any attempt to stifle debate in our party, be it through suspensions, purges or blacklisting, is completely unacceptable.

“The Labour Party is a broad church and a healthy difference of opinions is part and parcel of political life. Our members should be welcomed and not discouraged from holding their elected representatives to account.

“That’s why, when members have legitimate questions or concerns, in this case about involvement in life and death decisions such as war, their concerns should be listened to, taken on board and then challenged robustly if necessary, rather than silencing and ousting them from the Party.

“History has shown us that failure to do so can lead to the deaths of hundreds of thousands of innocent civilians, as we saw in Iraq.”

Corbyn stood down as Labour leader earlier this month and was replaced by a new team. Tarry commented: “Both the new Leader and Deputy Leader have been explicitly clear from the outset that they are determined to unify our party and end the factionalism and in-fighting that has dogged our movement for far too long.”

‘She should pay in the reckoning’

Corbyn had long been vice chair of Britain’s Campaign for Nuclear Disarmament (CND), putting him at odds with Labour’s traditional policy which accepted the UK’s Trident nuclear weapons system and favoured a more gradual multilateral approach to removing nuclear arsenals.

These differences spilled out into the open in May 2017, ahead of the general election, when Labour’s shadow defence secretary Nia Griffiths MP criticised Corbyn and his shadow foreign secretary Emily Thornberry MP in a media interview for their stance on nuclear disarmament.

In a WhatsApp conversation, the Labour’s Head of Press praised Griffiths as a “bloody hero” saying” “She doesn’t bullshit and she’s just just stabbed corbyn and thornberry [sic].” The official added that Thornberry was “awful” and “should pay in the reckonning [sic]” if Corbyn lost the general election.

The election campaign was interrupted on 22 May 2017 when a British-Libyan suicide bomber killed 22 people at a music concert in Manchester.

In his response to the attack, Corbyn criticised British foreign policy for increasing the threat of terrorism to the UK — one of the few times that a senior British politician had ever made that argument.

The connection between UK foreign policy and terrorism had been secretly identified by Britain’s intelligence agencies before the invasion of Iraq, according to documents released by the Chilcot inquiry and testimony given by a former head of MI5.

However, leaked WhatsApp messages show Corbyn’s speech angered some hawkish Labour party staff who believed: “In the face of a terror attack normal people do not blame foreign intervention they blame immigration.”

A colleague responded: “The speech won’t go down as badly as it deserves to thanks to the large groundswell of ill-informed opposition to all western interventions.”

When polling showed Corbyn’s chances of winning the general election were actually increasing, a party official said they felt “sick” and commented: “I CANNOT WAIT to see [right-wing journalist] Andrew Neil rip him to pieces over it tonight”, referring to Corbyn’s speech.

On 8 June 2017, when an exit poll for the general election predicted a hung parliament, one senior party official and opponent of Corbyn lamented his surprising performance and said it was the “opposite to what I had been working towards for the last couple of years!!”

The leaked report appears to show evidence that some of the most highly-paid Labour staffers wanted their party to lose the UK general election in 2017, and that campaign funds were secretly diverted towards candidates in safe seats who were personally favoured by party officials.

In a statement, 29 MPs from the left of the Labour Party have said the leak “contains revelations of senior officials undermining the 2017 general election campaign” and called for an investigation.

The Labour Party has said that it will investigate the contents of the leak, but also why it was passed to the media. DM