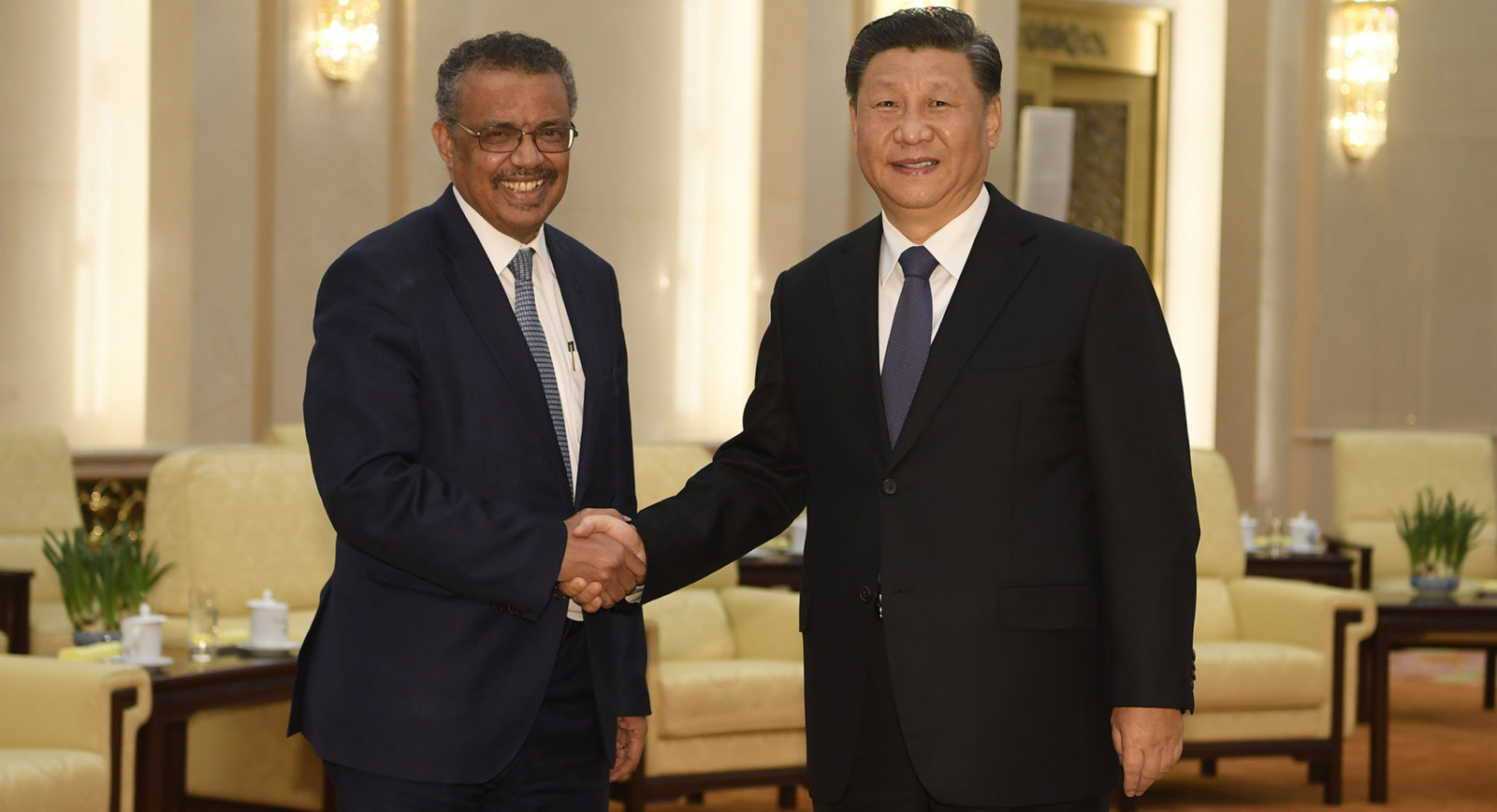 With some Western governments failing to follow the World Health Organisation’s advice on tackling coronavirus, right-wing figures in the US and UK are seeking to discredit the UN body as pro-China. But Britain and the US themselves are the WHO’s largest funders and among its major influencers.

The World Health Organisation (WHO) is under attack from Western politicians ranging from US President Donald Trump to the UK Conservative Party’s former leader Iain Duncan Smith, in addition to some right-wing media outlets.

Trump said the WHO has “called it wrong” in responding to coronavirus and “seems to be very much biased towards China”.

Duncan Smith told Sky News: “I think the WHO has spent a lot of its time actually having a go at Western governments about the way they’ve behaved over this particular outbreak and nothing but quiet praise for the Chinese.”

His concerns were echoed by fellow Conservative MP, Bob Seely, a member of parliament’s Foreign Affairs Select Committee, who told the Mail on Sunday: “We are seeing the horrible damage that a pandemic can do while the WHO has soft-pedalled on China.” A senior British Cabinet source told the same paper that the WHO’s director-general was “a shield for Beijing”.

These claims deflect attention away from Trump and Boris Johnson’s own handling of the pandemic towards a more traditional enemy – the Chinese Communist Party. It comes as UK medical staff are criticising Johnson’s Conservative government for not supplying them with personal protective equipment (PPE) that adheres to WHO standards.

Johnson did little in the early stage of the coronavirus crisis to heed the advice of the WHO in terms of mass testing, procurement of PPE, ventilators and oxygen, leaving Britain dangerously unprepared for the pandemic.

At least 17 British medical staff have now died from coronavirus, including a 36-year-old nurse, and some of their bereaved relatives blame their deaths on the lack of proper PPE.

Democracy at the WHO

It is not the first time the WHO has been criticised for its response to an infectious disease. In 2014, the WHO was accused of responding too slowly to the Ebola outbreak in West Africa, particularly in Guinea, which is a close ally of France.

Internal emails obtained by the Associated Press revealed that the WHO’s leadership were reluctant to call an emergency in case the countries affected by Ebola interpreted it as a “hostile act”. Guinean officials pressured the WHO to only report confirmed cases in order to “reassure expatriates working in the mining industry.”

This incident cast a bad light on the WHO’s outgoing director-general, Dr Margaret Chan, a Chinese medic born under British rule in Hong Kong, and in 2016 the WHO began a democratic process to appoint her successor.

Britain is often keen to secure leadership roles on UN bodies and the UK government put forward Dr David Nabarro, a British veteran of the international aid sector, as its candidate to succeed Chan.

Nabarro’s campaign secured endorsements from the then UK foreign secretary, Boris Johnson, who described him as a “superb fit for this job”. Jeremy Hunt, then health secretary, and Priti Patel, then development secretary, also endorsed Nabarro.

The UK government spent £101,000 financing Nabarro’s campaign, allowing him to travel the world, including a £6,188 stopover in Shanghai to tout his credentials at a WHO conference.

Meanwhile, the Ethiopian government entered its foreign minister, Dr Tedros Adhanom Ghebreyesus, in the race, and sponsored him to go on a similar world tour to Nabarro. Pakistan, France, Italy and Hungary also fielded their own candidates.

Perhaps surprisingly, the Ethiopian candidate received a glowing endorsement from Andrew Mitchell, Britain’s former international development secretary and Conservative MP, who claimed Tedros had the ability to “improve the health of billions of people around the world”.

The final ballot in May 2017 went down to a two-horse race between the Ethiopian and the Briton, with Tedros winning by 133 votes to 50.

With Tedros now in charge of the WHO, he could select his top team. Rather than punish Britain for running against him, among his most senior appointments was Jane Ellison, a British Conservative politician who had recently served as a public health minister in the UK government.

She was made deputy director-general of the WHO and is currently an executive director with the power to sign agreements with donors and allocate budgets. Out of the 20 most senior staff at the WHO, half are from Europe, the US or Canada, and only one is from China.

The UK went on to work closely with Tedros during the Ebola outbreak in North Kivu in the DRC from 2018-19, where Britain’s Department for International Development was praised by the WHO for being the largest donor to its relief efforts.

Such cooperation has only strengthened with the coronavirus outbreak, after Tedros appointed his old rival, the UK’s David Nabarro, as one of his six special envoys on Covid-19 in February 2020. In this role, Nabarro has urged countries to follow the WHO’s advice on how to handle the coronavirus crisis.

This presence of British government-approved figures such as Ellison and Nabarro at the top of the WHO is often overlooked by those seeking to portray the organisation as pro-China.

For example, a critique of the WHO published in the Mail on Sunday was written by Ian Birrell, a former speechwriter for David Cameron, in whose government Ellison had served as a health minister. Despite being very familiar with the Conservative Party’s leadership, Birrell omitted any mention of Ellison.

Many critics, including Birrell, have raised concerns that Tedros used to serve in a repressive regime which had close links to China. Birrell asked rhetorically:

“So why would Dr Tedros be so sympathetic to China? Perhaps it goes back to his time as a top Ethiopian politician. He served in senior roles under Meles Zenawi, who ran a brutal dictatorship with close ties to Beijing, which admired the regime’s authoritarian model of development.”

Tedros served from 2003 to 2016 in a repressive regime – that jailed political opponents and stifled dissent – as a health minister and later as foreign minister. However, it is harder to claim that Ethiopia in this time period was particularly pro-China. The regime received plenty of aid from the US and UK (£376-million in 2015) as well as China.

As Ethiopia’s foreign minister from 2012 to 2016, Tedros had a close relationship with the British government. A freedom of information request by Declassified UK found that a senior security official, Olly Robbins, met with Dr Tedros in February 2016 in Addis Ababa to “deepen UK cooperation with Ethiopia” on stopping migration from East Africa to Europe.

Not only was the UK keen to support a repressive regime’s border guards, it also spent more than £1-million training Ethiopian soldiers. This was despite the fact that a British-Ethiopian man, Andy Tsege, was being held on death row in Ethiopia for criticising the ruling party.

Tsege’s family criticised Boris Johnson, then Britain’s foreign secretary, for not doing enough to raise the matter with his opposite number, Tedros. Some suspected that the UK did not want to jeopardise trade and security ties with the East African country.

Another criticism levelled at the WHO has been its refusal to recognise Taiwan as a sovereign state, insisting of calling it a province of China to appease the regime in Beijing, and failing to heed its warnings about the spread of the coronavirus inside mainland China.

Dr Bruce Aylward, the WHO’s assistant director-general, dodged a journalist’s questions about Taiwan in a video interview by appearing to switch off the computer connection.

However, the UK government itself “does not recognise Taiwan as a state and has no diplomatic relations with Taiwan” – nor do the US and Australia. Only 14 members of the United Nations officially recognise Taiwan and it is not part of any UN agencies.

The WHO’s recent refusal to talk about Taiwan is particularly pertinent because the country is said to have sounded the alarm on the coronavirus sooner than Beijing. Taiwan claims it told the WHO on 31 December 2019 that medical staff in Wuhan had fallen ill, a sign of human-to-human transmission.

It is further alleged that the WHO ignored this tip from Taiwan, and it does not appear to have been until 23 January, when Wuhan went into lockdown, that the WHO announced that “human-to-human transmission is occurring”. Critics say this three-week delay in January allowed the virus time to spread to other countries.

Whilst this may be true, it took another two months before UK Prime Minister Johnson announced a partial lockdown on 23 March, by which point more than 300 people in Britain had died.

As Declassified UK has previously documented, Johnson did little in that two-month period to heed the advice of the WHO in terms of mass testing, procurement of PPE, ventilators and oxygen – delays which left his country unprepared for the pandemic.

It is not certain that had the WHO warned the world earlier in January, the UK would have used that extra time to prepare.

Last week, the British investigative magazine Private Eye asked why the WHO was “being so indulgent of China” and suggested its “kow-towing might just be related to its own precarious financial position, which makes it increasingly reliant on Beijing”. It said that the WHO’s largest funder, the US, was behind on its payments, and that “China, second-largest contributor, is more reliable”.

In fact, there are other countries and organisations, apart from the US, that give more money to the WHO than China.

When it comes to assessed contributions to the WHO, which are mandatory for member states and vary according to their wealth, China gave the third-largest amount in 2018-19, below the US and Japan. Germany, France and the UK were the next top donors.

The WHO also receives voluntary contributions from states, which can be much larger than their assessed contributions. Again, the US was the highest spender in this category, followed by the UK and Germany.

When assessed and voluntary contributions for 2018-19 are combined, China was the sixth largest state funder of the WHO, according to its press office.

When all private donors are included, China does not even feature in the WHO’s top 10 overall funders for 2018-19. The Bill and Melinda Gates Foundation is the WHO’s second-largest funder after the US government.

According to a report by Global Justice Now, the Gates Foundation has considerable access to the WHO leadership and much of its funding is tied to particular projects it wishes to support, helping to secure influence over the organisation’s direction

In a 2017 interview with the right-wing Spectator magazine, Gates warned: “If people aren’t worried about pandemics coming to Britain then they should be… If you asked what in the world is most likely to jump out and kill an extra 10 million people, it is absolutely a pandemic.”

Dr Tedros has rejected accusations that the WHO is “China-centric”, telling a press conference yesterday: “We are close to every nation, we are colour-blind.” DM