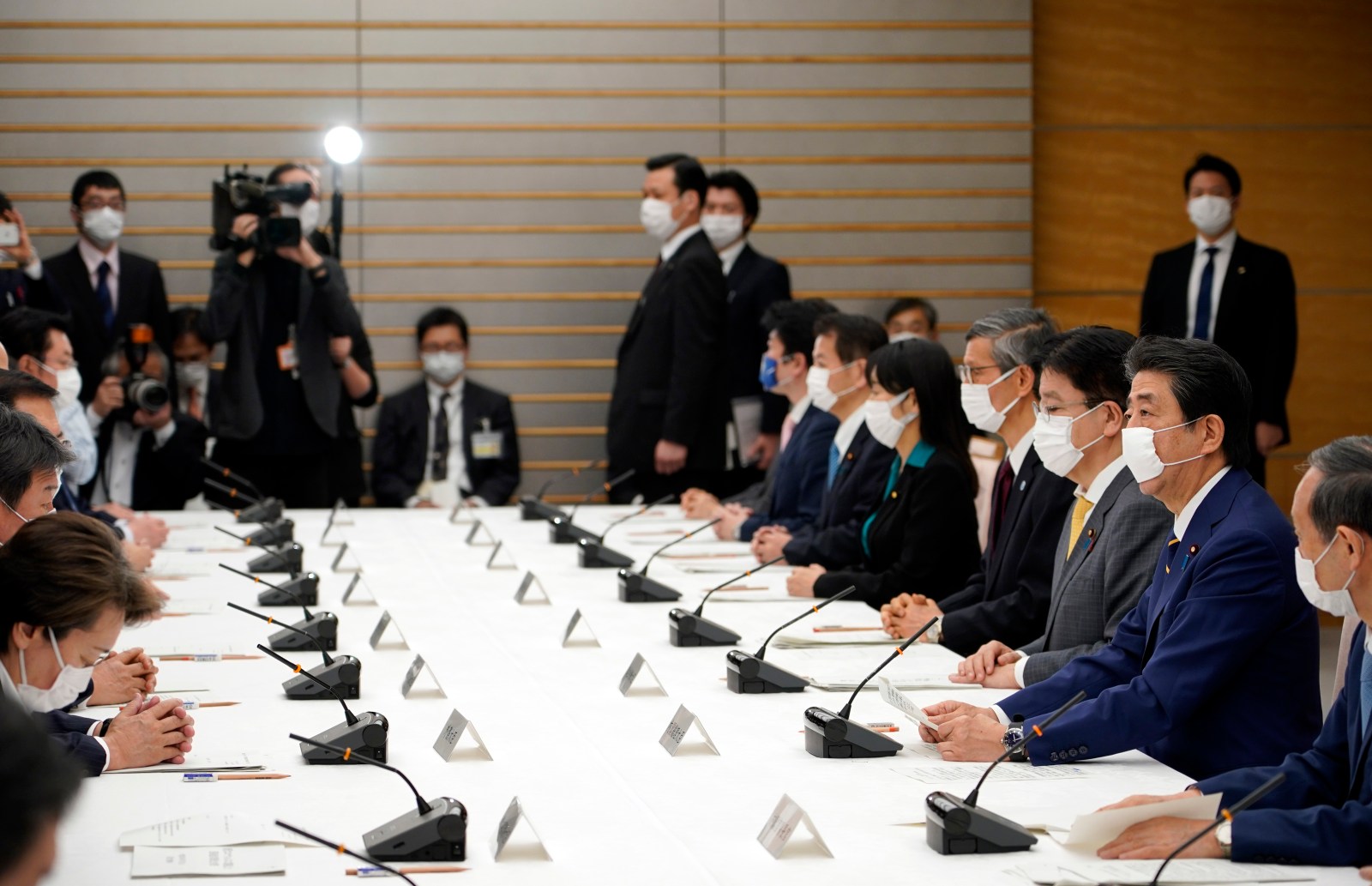 epa08347516 Japanese Prime Minister Shinzo Abe (R) declares a state of emergency during a meeting of the task force against the novel coronavirus and COVID-19, at the prime minister's official residence in Tokyo, Japan, 07 April 2020. Prime Minister Abe declared a state of emergency in Japan amid an increase of coronavirus and COVID-19 infection cases. EPA-EFE/FRANCK ROBICHON / POOL

TOKYO, April 7 (Reuters) - Japanese Prime Minister Shinzo Abe on Tuesday declared a state of emergency to fight new coronavirus infections in major population centres and unveiled a stimulus package he described as among the world's biggest to soften the economic blow.

The state of emergency, giving authorities more power to press people to stay at home and businesses to close, will last through May 6 and be imposed in the capital, Tokyo, and six other prefectures – accounting for about 44% of Japan’s population.

“The most important thing now is for each citizen to change our actions,” Abe said in televised comments made at a meeting of a government task force.

“If each of us can reduce contact with other people by at least 70%, and ideally by 80%, we should be able to see a peak in the number of infections in two weeks,” he said.

The government also approved the stimulus package worth 108 trillion yen ($990 billion) – equal to 20% of Japan’s economic output – to cushion the impact of the epidemic on the world’s third-largest economy.

That exceeds the equivalent of 11% of U.S. output for the stimulus package laid out by President Donald Trump and 5% of output for Germany’s package.

Direct fiscal spending amount to 39.5 trillion yen, or about 7% of the economy, more than double the amount Japan spent following the 2008 collapse of Lehman Brothers.

Japan has been spared the big outbreaks of the coronavirus seen in other global hot spots, but a recent, steady rise in infections in Tokyo, Osaka and other areas led to growing calls for Abe to announce a state of emergency.

Coronavirus infections in Tokyo more than doubled to about 1,200 in the past week, with more than 80 new ones reported on Tuesday, accounting for the highest number in the country. Nationwide, cases have climbed past 4,000 with 93 deaths as of Monday.

Abe has stressed that the state of emergency will stop short of imposing a formal lockdown as seen in other countries.

The emergency gives governors the authority to call on people to stay at home and businesses to close. With no penalties for ignoring the requests in most cases, enforcement will rely more on peer pressure and respect for authority.

Tokyo Governor Yuriko Koike said the city was in talks with the central government to decide what types of facilities it would ask to close or curtail business hours, while reiterating there would be no restrictions on buying groceries and medicine.

The government would not ask rail companies to reduce the number of trains in operation, Abe said.

Other essential infrastructure like mail and utilities would operate, as will ATMs and banks, public broadcaster NHK said.

“We are asking citizens to buy only what they need when they need it as there is sufficient food supply and no suspension is planned at food factories,” he told reporters earlier, adding there was no sign of disruption to Japan’s grain imports.

But the restrictions will add to pains the virus is inflicting on the world’s third-largest economy, which is seen as already in recession as supply chain disruptions and travel bans chill factory output and consumption.

Japan will sell a record amount of additional bonds worth more than 18 trillion yen to fund the package, adding to its huge debt which is twice the size of its economy.

While the stimulus could ease the immediate damage from the pandemic, lawmakers are already calling for even bigger spending to prevent bankruptcies and job losses.

Analysts expect the economy, which shrank in the final quarter of last year, to post two more quarters of contraction, piling pressure on the government and the central bank to do more.

“The government will probably compile another supplementary budget soon to stimulate the economy with even more spending,” said Takahide Kiuchi, a former Bank of Japan board member who is now an economist at Nomura Research Institute.