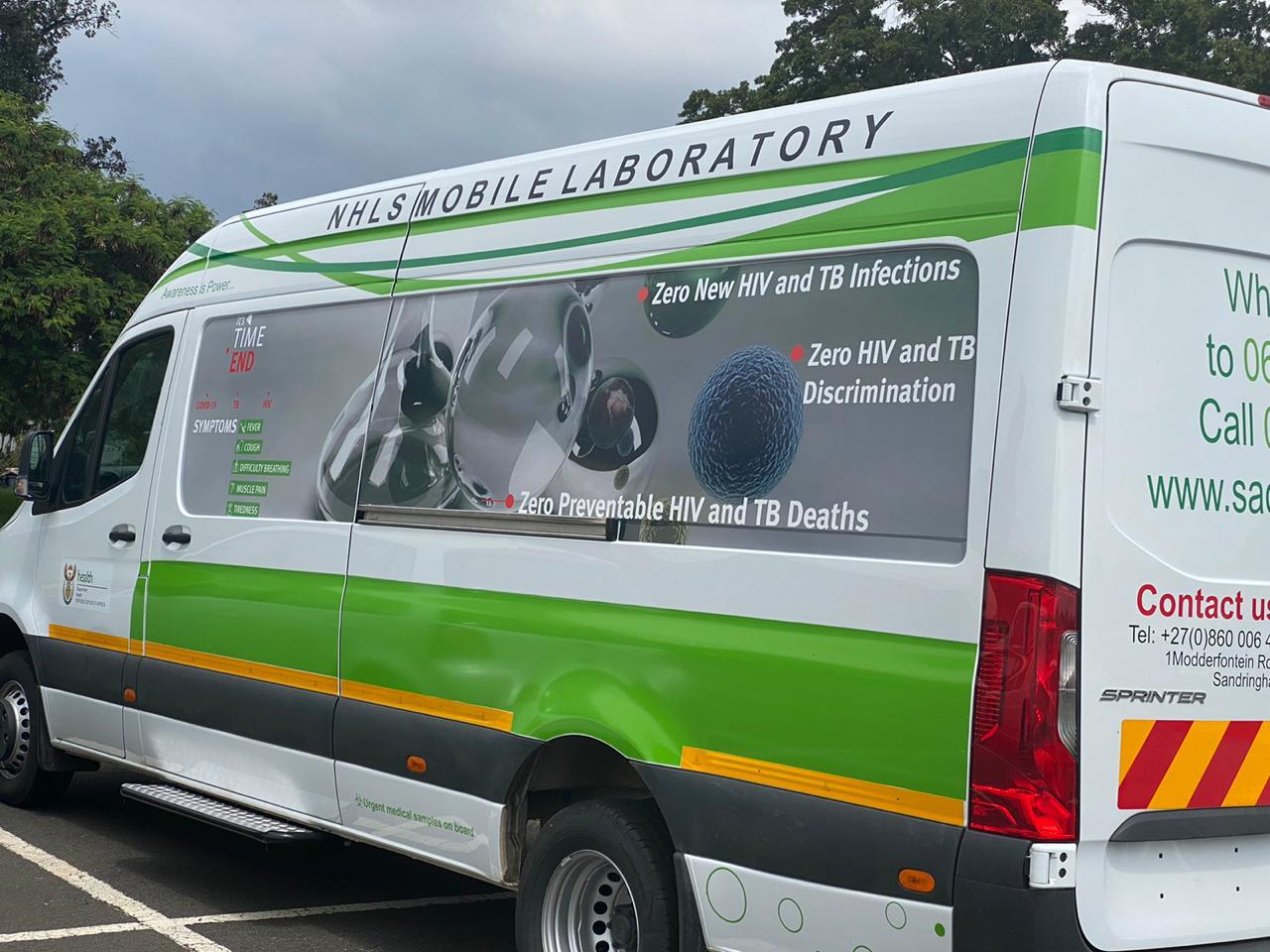 One of 60 new mobile laboratories ready to roll onto the streets of South Africa after the launch in Johannesburg on 1 April. The numbers of the Covid-19 information hotlines are printed on the back of the van. (Photo: Department of Health)

Covid-19 might become the worst challenge our country faces for generations.

These were the words of Health Minister Zweli Mkhize on the eve of rolling out the “Covid Homes Visits Programme” on 1 April, with the endorsement of President Cyril Ramaphosa.

Time is of the essence, Mkhize said, and testing needs to be ramped up, especially in light of the impending flu season which will complicate matters even further as people congregate in clinics and hospitals.

Mkhize is adamant the current testing is way too low, and that we do not have a “true picture of the size of the problem” and will only see things accurately once hundreds of thousands of people are tested.

The new mass-testing programme has hit the ground running.

As of yesterday, thousands of community healthcare workers will be going door-to-door to do “no-touch” screening for Covid-19 symptoms in each of South Africa’s provinces.

Almost 1,000 wards were identified as priorities for screening to make sure the most vulnerable are screened as soon as possible, according to Mkhize.

Specially fitted vans were rolled out by the National Health Laboratory Service, bringing their total number of mobile testing units up to 67.

Mkhize has given MECs very clear instructions on what their mission is, from procuring extra beds and dedicated treatment centres to earmarking extra health professionals to be called upon if needed.

He ended his address by saying:

“Based on personal observations, the pounding of Covid-19 has started and it will intensify from this week and we may see rising mortality rates. We are losing families, friends, colleagues, community members, health workers and other professionals across all age groups.

“We will look at scientific models when these are ready but we now have enough evidence to indicate that unless we move fast we will soon be swarmed.

“We no longer have time.

“We need to be strong, focused and courageous.

“We need to be decisive in our actions. We need to escalate our response to a higher level.

“I appealed for a focus on implementation and less on arguments and debates.

“There can never be a perfect plan in a battle. Ground experience will refine our actions. Academic debates have their place but during this ground offensive we will entertain advice that refines and improves our effectiveness.

“The country’s future will depend on our swift coordinated actions.”

At the same time, ANC leadership in the Western Cape has accused the DA of trying to one-up the national government in its response to Covid-19 – leading to errors and confusion, such as over the sale of cigarettes. They argue the DA is trying to show that the province is better equipped and skilled to manage the pandemic, and in the process is excluding other parties, in order to score points before next year’s election. Carien Du Plessis outlines the back-and-forth.

Meanwhile, the restrictions placed on taxi capacity were revised twice on Wednesday,1 April. The original lockdown regulations stated that taxis could operate at a 50% loading capacity.

Transport Minister Fikile Mbalula announced on Wednesday that taxis can run at 100% loading capacity – if protective measures were in place.

However, he later revised this to 70% loading capacity – if passengers were issued with surgical N95 masks, which are expensive and already in short supply.

As Bheki Simelane reports, these revisions came after the ministry held talks with the taxi industry, which voiced its concern about operational losses. The taxi industry was planning a strike against the transport regulations, but it was called off on Monday after a meeting between taxi associations and provincial leadership.

The question of who should wear which masks when, and if at all, is garnering a lot of attention around the world. In South Africa, authorities also seem to be in two minds about it. Rebecca Davis takes stock of the current debate.

However, South Africa’s stock of hand sanitiser is getting a boost. Alcohol plants are up and running again, not to make fine liqueurs, whiskies and brandies but to make free hand sanitiser for hospitals, clinics and NGOs. Factories owned by Distell, which produces Olof Bergh brandy, Bains whisky and Amarula in the Western Cape, will now produce 40,000 litres a day of hand sanitiser.

Meanwhile, five residents of Alexandra have been placed under precautionary isolation by the Gauteng Department of Health. They are all close contacts of another resident who tested positive for Covid-19, but who fled to Limpopo after being tested. As Estelle Ellis reports, he has been arrested and placed in hospital.

Eight South Africans are being quarantined in Gauteng after they returned to South Africa on an evacuation flight from Dubai. The group had spent eight days in the Dubai airport. About 300 Brazilians have been flown home from OR Tambo, while about 200 wait in Cape Town for a charter flight to fetch them. As Greg Mills reports, this flight might even be able to bring stranded South Africans back from Sao Paulo. 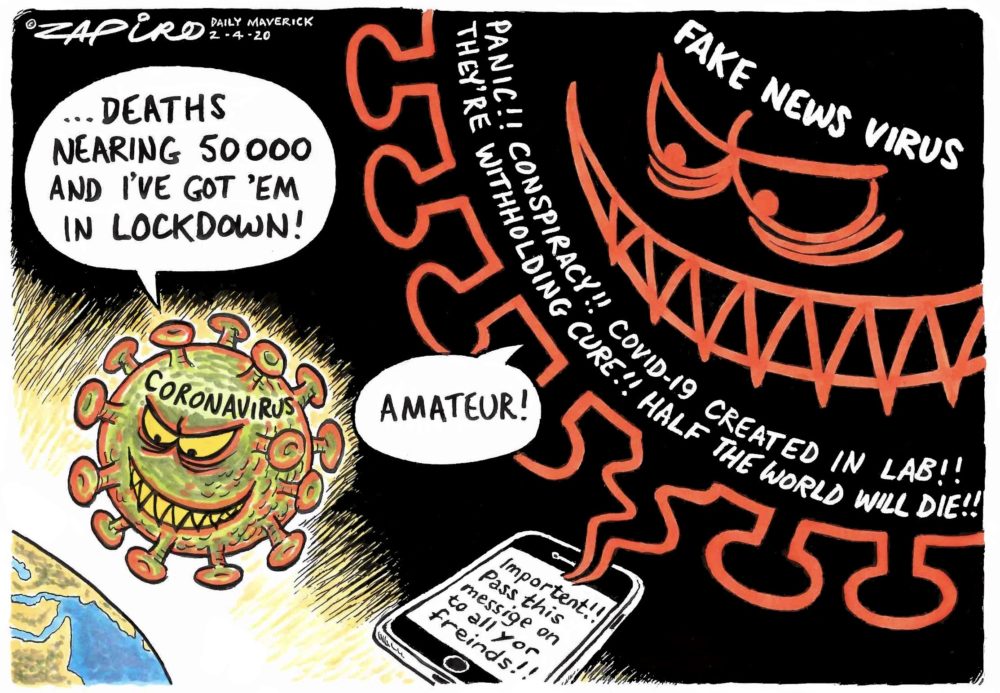 As the first week of the lockdown draws to a close, Marianne Merten checked in with four small business owners on how they are coping – especially with the paperwork needed to access government support.

The Young Maverick Writers have continued their series on how the stay-at-home policy is playing out in their neighbourhoods. Adjusting to life indoors is not easy. As Chanel Retief puts it: “So yes, I miss normal, but I am coping with weird.” DM