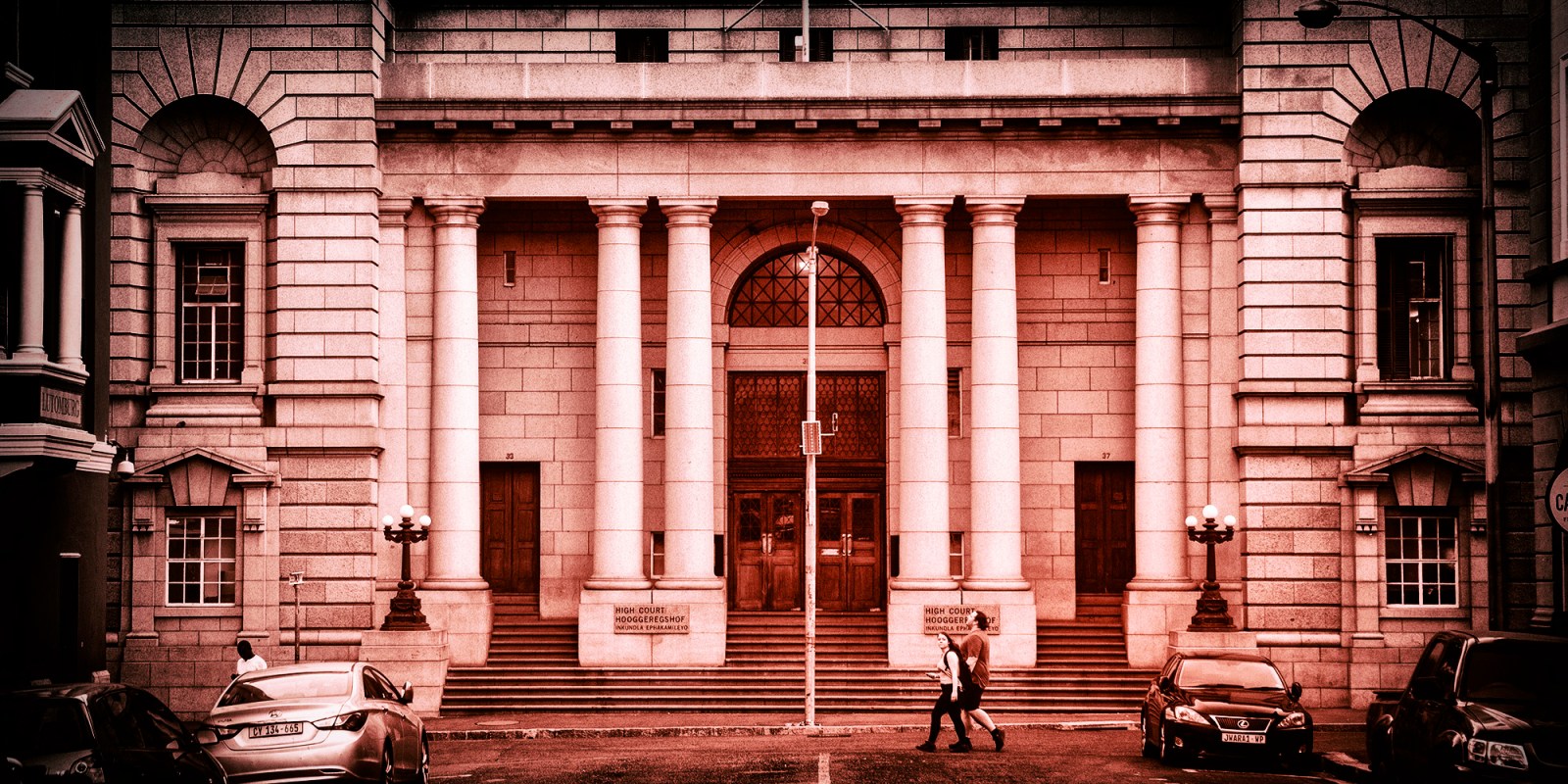 Questions that immediately arise from the matter are: When did Judge President John Hlophe become aware that a judge in his division had been implicated in the misappropriation of trust funds of a firm linked to him and what did he do about it at the time?

The Cape Bar Council has lodged a complaint with the Judicial Service Commission (JSC) against Western Cape High Court Judge Mushtak Parker, with regard to his conduct and knowledge of an alleged R8-million shortfall in the trust account of a legal firm he helped to establish.

Advocate and senior counsel Andrew Mark Breitenbach lodged the affidavit with the JSC on behalf of the Cape Bar Council on Tuesday 31 March 2020.

The complaint against Parker comes in the wake of an application in January 2020 by the Legal Practice Council (LPC) to the Western Cape High Court to have two directors linked to Parker’s legal firm struck from the roll of attorneys.

The LPC has also asked the court for a curator to be appointed to administer the accounts of Parker & Khan Incorporated, pending the application to strike two directors, Abdurahman Khan and Irfan Kassiem Parker from the roll.

Questions that immediately arise from the matter are: When did Judge President John Hlophe become aware that a judge in his division had been implicated in the misappropriation of trust funds of a firm linked to him and what did he do about it at the time?

Was Hlophe not obligated to place Parker on “garden leave” while the matter was being finalised, and furthermore, was it not his duty to report the matter to the JSC?

Parker is still a judge in the division and no complaint by Hlophe has been sent to the JSC.

Bear in mind that this is the same Judge Mushtak Parker whom no less than 10 judges in the division have sworn told them that he had been assaulted in chambers by Hlophe in February 2019.

The 10 judges have subsequently also complained to the JSC that Parker appears to have not told the truth when he “agreed” with an affidavit by Hlophe to the JSC, in a matter involving a complaint by Deputy Judge President Patricia Goliath, that he had not assaulted Parker.

The LPC, in its application, had this to say about the Parker & Khan matter:

“One is not dealing here with trust deficits arising from simple accounting errors. There appears to be a continuous pattern of concealing trust deficits, by keeping a separate list of the trust deficits, which demonstrates an element of deceit, inimical to the honour associated with the profession of an attorney.

“The attorneys’ profession demands of its members complete honesty, reliability and integrity.”

In his answering affidavit in the LPC matter, Irfan Parker revealed that his brother Mushtak, a former director of the firm until he resigned after being appointed to the bench in 2017, had “stumbled on the trust shortfall” and had confronted Khan about this.

Irfan Parker said that he had raised the issue with Khan and Mushtak Parker during the latter part of 2016. In other words, Parker would have been aware of the shortfall in the firm’s trust account when he was appointed to the bench. He did not inform the JSC of this.

The LPC has also subsequently revealed that Mushtak Parker had suggested that some of the missing trust funds be replenished from trust monies that had belonged to his mother.

There are screeds of printed WhatsApp messages between Mushtak Parker, his brother and Khan which form part of the LPC application and which Breitenbach cites in his affidavit.

“There is the WhatsApp evidence that in early May 2017, the respondent [Mushtak Parker] himself arranged that trust monies (belonging to his mother) be used for his own personal purposes, apparently without her knowledge and consent,” said Breitenbach in his affidavit.

In his answering papers to the LPC application, Irfan Parker stated that “on 2 May 2017, R35,000.00 was paid to [the respondent Mushtak Parker]. I presume that [the respondent] obtained the necessary consent”.

In his affidavit, Breitenbach said Parker had, from October 2016 onwards, held a series of appointments as an acting judge of the High Court in the Western Cape before his appointment as a judge in November 2017.

In a JSC questionnaire, Parker had described himself as, at the time of signature (2005 till present) as “the founder and managing partner of Parker & Khan”.

The questionnaire contained, said Breitenbach, the following questions to both of which Parker had replied “no”:

On 31 July 2017, Parker was shortlisted by the JSC for a permanent position in the high court. His interview with the JSC took place on 5 October 2017 and he was appointed with effect from 1 November 2017.

The grounds for the complaint by the Cape Bar Council, said Breitenbach, were set out in section 14 (4) (b) and/or (e) of the Judicial Service Commission Act.

Breitenbach said that Parker, while he was an attorney (and indeed the managing partner of the firm) had an obligation to report the matter “to the relevant professional body, namely the then Law Society of the Cape of Good Hope”.

The rules of the attorneys’ profession at the time included that a firm should “immediately report in writing to the society should the total amount of money in its trust bank accounts and money held as trust cash be less than the total amount of credit balances of the trust creditors shown in its accounting records, together with a written explanation of the reason for the debit and proof of rectification”.

Rule 35.13.11 also obliged a firm to “immediately report in writing to the society should an account of any trust creditor be in debit, together with a written explanation of the reason for the debit and proof of rectification”.

Rule 35.18 required “every partner of a firm, and every director of a personal liability company, will be responsible for ensuring that the provisions of the Act and of those rules relating to trust accounts of the firm are complied with”.

Unless they were prevented by law from doing so, “every member is required to report to the society any dishonest or irregular conduct on the part of another member in relation to the handling or accounting for trust money on the part of that other member.

“The affidavit evidence of IK Parker shows that before the respondent [Parker] began acting as judge of the High Court in October 2016, he was aware of the deficit in the trust account of the attorneys’ firm of which he was the managing partner.”

Parker’s evidence and the WhatsApp messages also suggested that “… before the respondent was appointed as a permanent judge of the High Court in November 2017 he was also aware of the circumstances in which the deficit had arisen and how the trust account was maladministered”.

“The affidavit evidence of the LPC shows none of the respondents, Khan and IK Parker, made any report to the Cape Law Society (the predecessor to the Western Cape Provincial Office of the LPC67) and that their failure to do so persisted while the respondent [Mushtak Parker] was an acting judge of the High Court in late 2016 and during 2017.

“The Law Society was first alerted to the problem when it received an anonymous tip off on 25 July 2018,” said Breitenbach.

He submitted to the JSC that Parker’s conduct “is incompatible with or unbecoming of the holding of judicial office”.

“If indeed the respondent did make the arrangement to utilise the trust moneys… [from his mother’s trust] without his mother’s knowledge and consent, that too would constitute such conduct.”

While some of Parker’s conduct might have occurred before his first appointment as an acting judge, “this is not a case of events long predating the respondent’s appointment that can have no current relevance to his position as a judge”.

“The trust account deficit was a live, unresolved issue from October 2016, when the respondent was taking on acting appointments and apparently withdrawing from practice at the firm; it remained a live issue in 2017, over the period of his acting positions, his application for permanent appointment and shortlisting by and interview with the JSC; and it continued as a live issue after his permanent appointment as a judge in late 2017 and into 2018 and 2019,” said Breitenbach.

Parker’s conduct, he said, entailed a contravention of section 14(4) (b) of the Act, “more specifically the wilful, alternatively grossly negligent, breach of the duty of a judge to uphold the integrity of the judiciary imposed by article 4(a) of the Code of Judicial Conduct and/or the duty of a judge always to act honourably and in a manner befitting judicial office and the requirement that all activities of a judge be compatible with the status of judicial office imposed by article 5 of the Code of Judicial Conduct.” DM