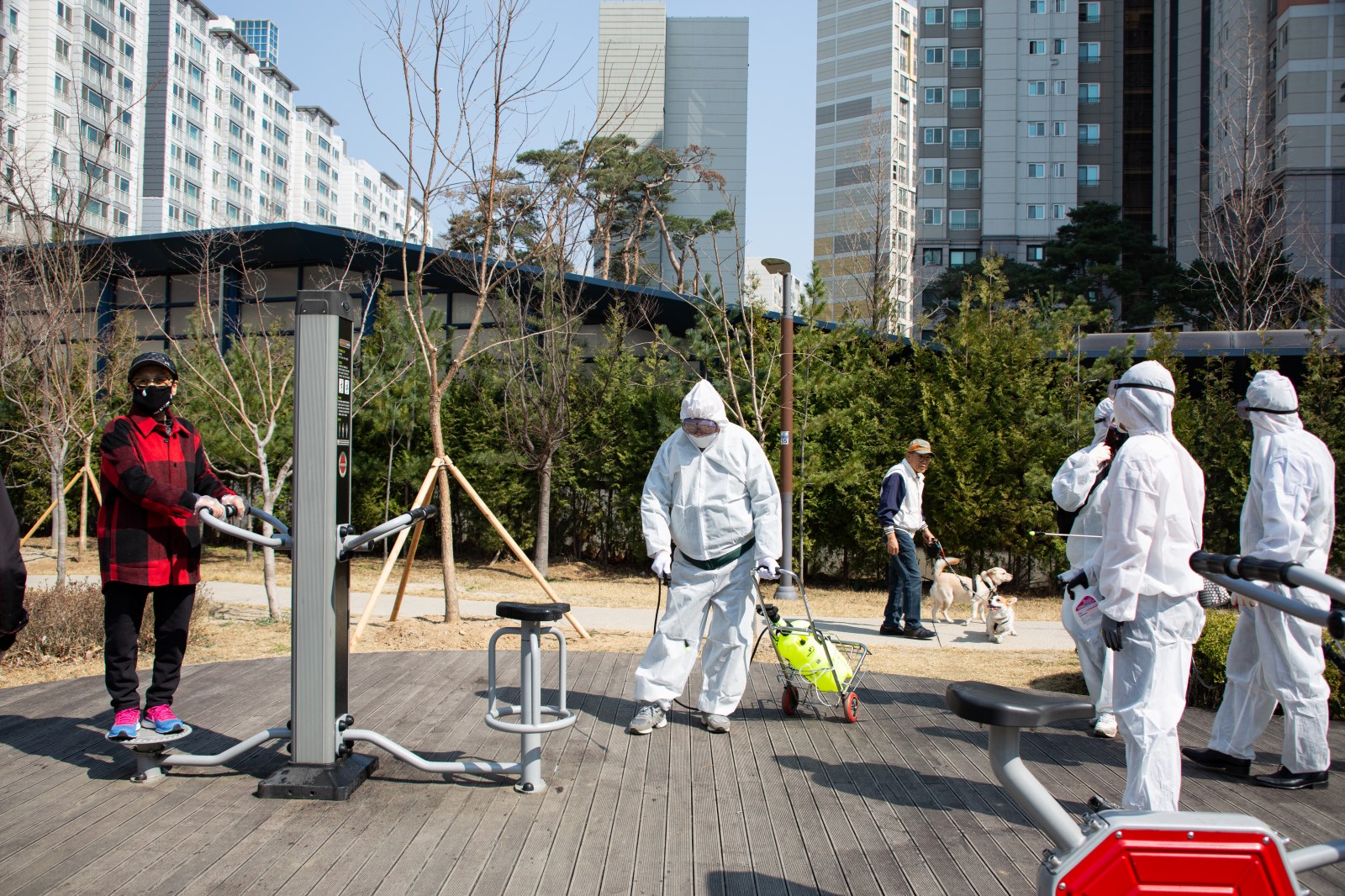 epa08314546 Local residents of the Bukgajwa-dong spray disinfectant in their neighborhood as a precaution against the coronavirus outbreak, in Seoul, South Korea, 23 March 2020. The nation has reported nearly 9,000 ca?ses of coronavirus, the infection that causes the disease COVID-19. EPA-EFE/JEON HEON-KYUN

SEOUL, March 23 (Reuters) - South Korea reported on Monday its lowest number of new coronavirus cases and the extended downward trend in daily infections since the peak on Feb. 29 has boosted hopes that Asia's largest outbreak outside China may be abating.

The Korea Centers for Disease Control and Prevention (KCDC) said there were 64 new cases on Monday, taking the national tally to 8,961. The death toll rose by one to 110.

The new numbers marked the 12th day in a row the country has posted new infections of around 100 or less, compared with the peak of 909 cases recorded on Feb. 29.

But officials urged even greater vigilance as imported cases and new, small outbreaks continued to emerge, such as in nursing homes, churches and crowded workplaces.

“We don’t give much meaning to numbers yet, but as there are some fluctuations despite a declining trend, our top priority is to prevent sporadic group infections and repatriated cases”, said Yoon Tae-ho, director-general for public health policy at the health ministry.

Of the new cases, 13 were from overseas travellers who tested positive after the government toughened border checks and imposed a two-week mandatory quarantine for all long-term arrivals from Europe.

Yoon said most religious venues turned to online services and most others complied with new rules on distance between people at gatherings.

But a church in the capital Seoul flouted the new rules, and members of its congregation scuffled with police, shoving and hurling abuse at officers who went there to check.

Mayor Park Won-soon called the behaviour at the Sarang Jeil Church “unacceptable” and ordered its closure for two weeks after it held a service on Sunday, during which more than 2,000 people sat close to each other, some without masks.

The church also failed to take a list of people attending the service, he said. Calls to the church for comment were unanswered.

“It was an act that seriously threatens the safety of not only the attendees but our entire community”, Prime Minister Chung Sye-kyun said. “We’re in a state of emergency that amounts to a war, and the administrative orders must not be taken as empty threats.” (Reporting by Hyonhee Shin; Editing by Christian Schmollinger and Simon Cameron-Moore)