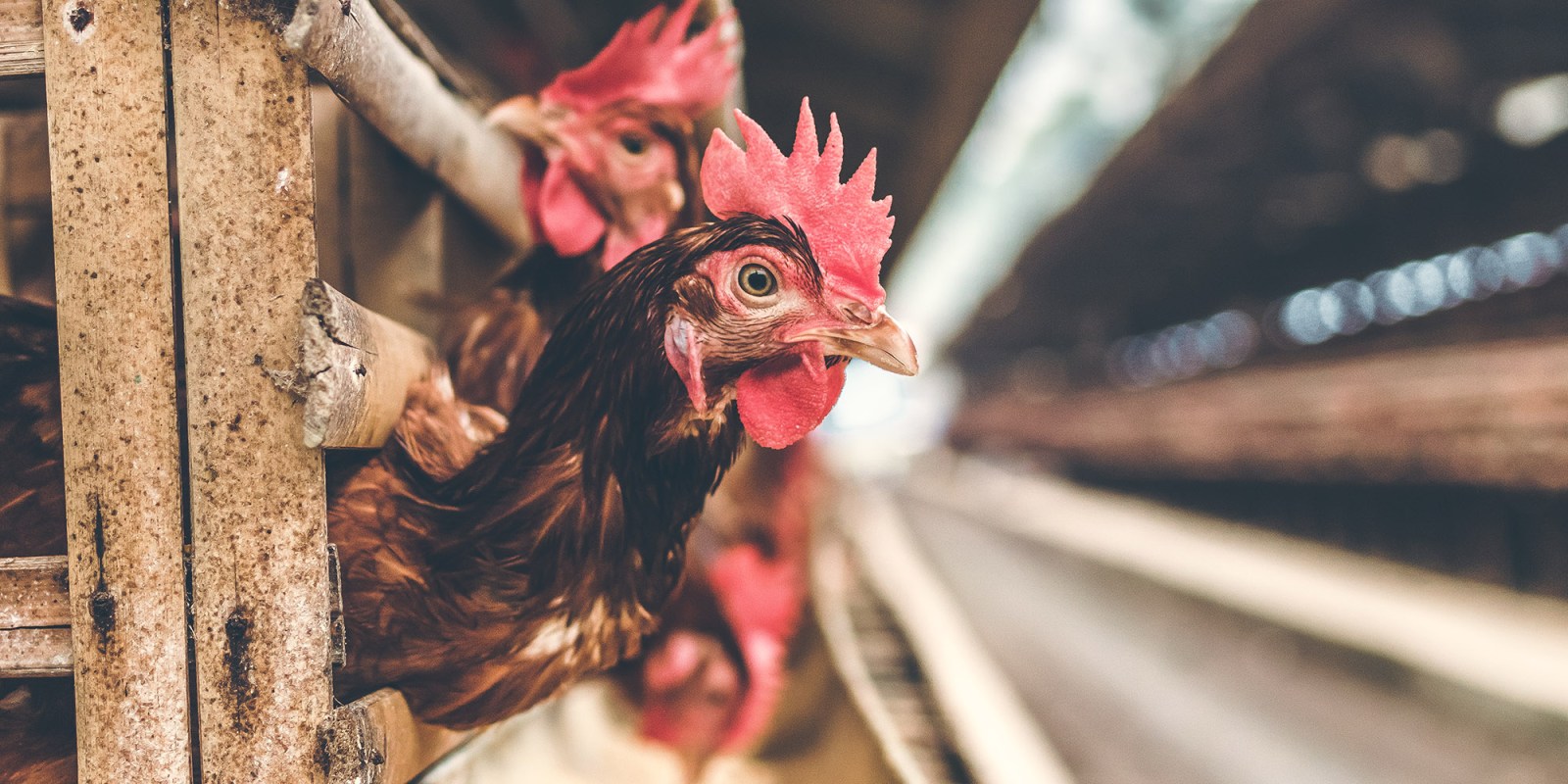 Chickens in the cage on chicken farm. (Photo: Flickr/Artem Beliaikin)

Reactions have been mixed over the government’s huge increase in poultry import tariffs that were published in the Government Gazette on Friday 13 March 2020. Some say they will have a negative impact on cash-strapped consumers and emerging black importers, while others believe it will boost the local economy and create jobs.

Government’s new chicken regulations mean the import tariffs will be increased to 62% from 37% on frozen bone-in chicken portions (a 25% increase), and to 42% from 12% (a 30% increase) on frozen boneless portions.

The Emerging Black Importers and Exporters Association of South Africa (Ebiesa) says the 25% increase in the tariff on frozen bone-in chicken portions will translate to consumers as follows: 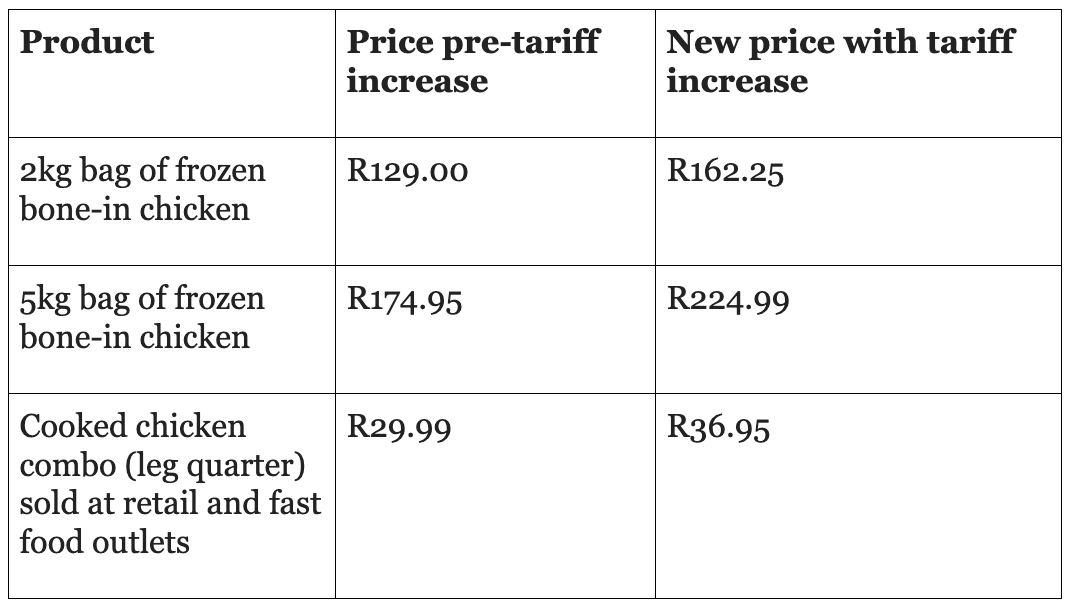 “The country is officially in recession, and consumers and small business owners need all the help they can get. Why ramp up the tariff so substantially? The evidence is clear – these tariff increases will lead to price increases for consumers.

“Many of these businesses are already marginal, and this is likely to mean some of our members simply have to shut up shop, depriving people of jobs and an income.”

Ebiesa represents the interests of emerging black importers of chicken to South Africa. These are small South African businesses that each sustain between three and five employees and provide quality poultry to mainly the second economy.

Furthermore, Speirs says that South African producers are only geared to cover 70% of local demand, with imports bridging the 30% gap.

“Chicken is the largest and most affordable source of protein in South Africa, but local producers have not expanded production, despite the fact the tariffs have been in place for some time.

“Instead of investing in local production, the poultry industry just asks for more protection,” she adds.

Charges are based on recommendations from the International Trade Administration Commission of South Africa (Itacsa).

At the South Africa Investment Conference in November last year, the poultry industry, represented by the South African Poultry Association (Sapa), agreed to invest R7-billion over a period of time, as part of its commitment to the poultry master plan.

Speirs says, “We are unsurprised to see that even before that investment begins, the local industry has consumers paying for its own inefficiencies.

“Certainly, we are pleased there is now a master plan for the poultry industry, to address the many structural challenges and other problems facing the local chicken industry, which include a failure to transform, an inability to grow to meet local demand, and the failure to develop a poultry export programme.

“But increasing the existing tariffs on imports is not going to fix the real sources of the local industry’s problems, which include operational inefficiency, a lack of innovation and a reluctance to transform.”

Francois Baird, the founder of the FairPlay Movement, says the new chicken tariffs will be a test of the industry master plan.

The FairPlay Movement is a not-for-profit trade organisation whose goal is to end predatory trade practices between countries.

“The higher tariffs on predatory chicken imports from Brazil may well reduce importers’ profits, but whether or not they will stem the tide of predatory trade and dumped chicken swamping South African shores remains to be seen,” says Baird.

He says that one of the industry master plan’s objectives was to “contain” imports so that the industry could recover, grow and create jobs. Whether the new tariffs do so remains to be seen.

“To succeed, these new tariffs on chicken imported from Brazil as well as earlier higher duties on chicken imports from the EU must prove to be sufficient to halt the surge of predatory imports and prevent further job losses, mostly in impoverished rural areas.”

FairPlay hopes this will be the case, but a steady rise in dumped EU imports after the lifting of bird flu bans suggests further action will be necessary.

Chicken imports doubled between 2010 and 2018, discouraging investment in expansion and job creation. Because protection has been inadequate, most of the increase in demand for chicken in recent years has been gobbled up by predatory imports at the expense of small-scale farmers and their workers, Baird says.

He says real protection for the SA industry, and a spur to job creation would be to limit imports to 10% of local sales. Restrictions in the EU have kept chicken imports in that region to around 7%, so a sharp cutback here would be possible.

“It is therefore a pity that Itacsa and the DTIC did not grant the full 82% tariff increases that some experts and the SA poultry industry believe are necessary to protect the local market from the damaging impact of Brazilian chicken imports.

“Concerted action is needed against both Brazil and the EU in order to halt and then reverse the importers’ steady and concerted takeover of our local chicken market through predatory trade practices.”

Minister of Trade and Industry Ebrahim Patel agreed to the new levies late last year and Bloomberg reported that Izaak Breitenbach, general manager of the South African Poultry Association said the industry body had applied for increased tariffs on Brazil and the EU to counter a flood of shipments sometimes under-priced to dodge import duties, resulting in annual losses of R6.5-billion for the SA industry.

“The poultry industry is in distress not because it isn’t producing well,” Breitenbach said.

“It is competitive but needs to compete with unfair trade from other countries.”

Baird said, “Imagine the local economic impact if the R6-billion that was paid last year to foreign producers of imported chicken had instead been spent on local production and local grain, all of which would have generated local tax revenue and, significantly, local jobs in rural areas where they are most needed.”

Both the Association of Meat Importers and Exporters (AMIE) and the South African National Consumer Union side with Ebiesa. They have warned the government in the past against increasing tariffs for imported chicken products, saying such an increase would see prices skyrocket and jobs plucked from the meat industry.

They claim that imports serve a fundamentally different part of the market and that the entire output of the local product is used primarily by the fast-food market. They are of the view that imports are used as a scapegoat for other issues affecting the local poultry industry.

It has become all too clear that the jury around a tariff adjustment decision is split, either regarding it as not fit for purpose or else not properly understood. But perhaps the discord is simply a teething problem in implementing the master plan.

Most of the measures set out in the master plan are due to be completed by mid-2020, with a list of important deadlines to be met by the end of this month. These include important food safety measures – a review of regulations to prevent the thawing and refreezing of imported chicken portions because of health risks, and a review of packaging and traceability regulations to ensure that all imports can be traced, and that producers meet required standards. BM