Industry master plan: Not a chicken in every pot, but a lot more pots

Industry master plan: Not a chicken in every pot, but a lot more pots

South Africa is not taking advantage of potential export possibilities, nor are any efforts being made to cover the loss in product availability, if tariffs halt chicken imports from Brazil, says Unati Speirs, chairperson of Emerging Black Importers and Exporters of SA. (Photo: Unsplash / Brett Jordan)

The Department of Trade and Industry (dti) met with local poultry players on Monday, 10 September to discuss the pillars of a master plan envisioned for the South African market, as reported by the Business Maverick a fortnight ago. Minister Ebrahim Patel has been adamant that a pure-protectionism approach is a no-go, and his mind has not changed, but the list of talking points has. It is much longer, which is seen in a positive light, the fact that the transformation agenda is way down that list, however, is not.

The poultry industry has taken its first significant steps in setting up an industry master plan to take the sector forward.

On the one hand, South African producers have struggled to resolve the competition and pricing challenges posed by a surge in imports, while on the other hand, local importers have been trying to process the threat of an 82% increase in tariffs.

But the local poultry industry has faced a plethora of headwinds and suffered numerous casualties over the last few years, including avian flu outbreaks. This year it felt further pressure with rising input costs, particularly those for feed, transportation, energy and labour, as well as declining consumer spending.

Trade and Industry minister Ebrahim Patel is no longer having any of that. He told participants of the proceedings in Pretoria on Monday, that no call will be made on import tariffs by Itac or otherwise until they come up with a compromise.

Furthermore, he laid down four short-term goals for the industry and government to achieve, with strict deadlines to be adhered to.

“Patel told members of this congregation that included the South African Poultry Association (Sapa), the Association of Meat Importers and Exporters (Amie) and the Emerging Black Importers and Exporters of SA (Ebiesa) – who all made representations – that he was only interested in an inclusive approach, where everybody’s views were taken into consideration, and according to Nontwenhle Mchunu, founder and owner of Mkabayi Group, and member of Ebiesa, he reiterated “it needs to make “business sense.”

She says the minister was decisive and showed great leadership in his approach. “It was a very positive experience,” she says.

The vision for the meeting was made clear, as one of the presentation slides indicate. 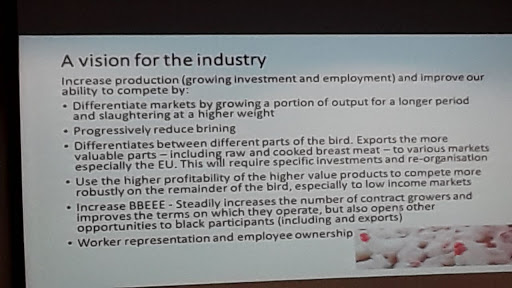 The immediate commitments made by dti and the Department of Agriculture, Forestry and Fisheries (DAFF) was to relook at the UK Trade Agreement following Brexit and look into the African Continental Free Trade Agreement (ACFTA). DAFF also needs to sort out the EU Cooked Chicken Health certificate as soon as possible. Organised labour also attended the meeting.

Amie agreed to get going on developing an export plan, which includes the ‘route to market support’ to emerging businesses. An export matrix needs to be delivered by both Amie and Sapa by October, and a Gap report and list of market priorities and responsibilities by November.

“In seven weeks or so, we will have a pretty good idea of where we are heading,” adds Mchunu.

Great potential is seen in the sector, which can benefit foreign producers, local consumers, producers, importers and emerging businesses. The poultry and egg industry is the largest sub-sector of the South African agricultural sector representing 16.6% of the total gross value of 2018 agricultural production of R288.6-billion. It is also the largest animal production segment. This is according to a report released by Research & Markets.

However, while the broiler industry is a key segment of agriculture, it is underserved by large-scale supply-chain and trade models.

Other members of the South African value chain like grain producers, food and safety services and logistics companies were not at the meeting, and current participants have told Business Maverick that they hope that they would be more involved in the near future.

One of the suggestions made at the meet was to absorb more of the valuable research done on innovation and technologic solutions by market players, universities and organs of state need to be better absorbed into the economy

A second was that “if we want to stand up against global leaders in export markets we need to involve the whole value chain and not consider chicken as a pure commodity.”

Says Mchunu: “that is what needs to happen if we want to compete with the likes of Brazil and the US, the biggest importers of chicken into South Africa and the largest producers in the world, who invest heavily in technology and subsidise the farmers on many other levels.”

“There is money to be made in maize, logistics and food and safety, not just pure poultry production,” she adds.

Ebiesa chairman Unati Spiers adds that Brazil has done amazing things in the integration of logistics into the chicken value chain for example. It has brought great cost benefits and limited cross-contamination.

“Instead of trying to shut out our trade partners, we should be strategic in developing mutually beneficial relationships with them. Instead of vilifying them, we should learn from them,” she says.

She says the fact that protectionism is no longer the only consideration on the table, we can now also focus on investing in the local industry to gear it up to expand and participate in the export market.

“Both imports and exports create valuable jobs and revenue, and we can no longer continue to ignore export opportunities,” she says.

And that is what the first three pillars of the master plan entails. The fourth pillar – transformation – Spiers says remains a subject of contention.

The pillars, with accompanying slides from the meeting include:

Pillar 1: Improving our ability to export and tightening our approach to imports. 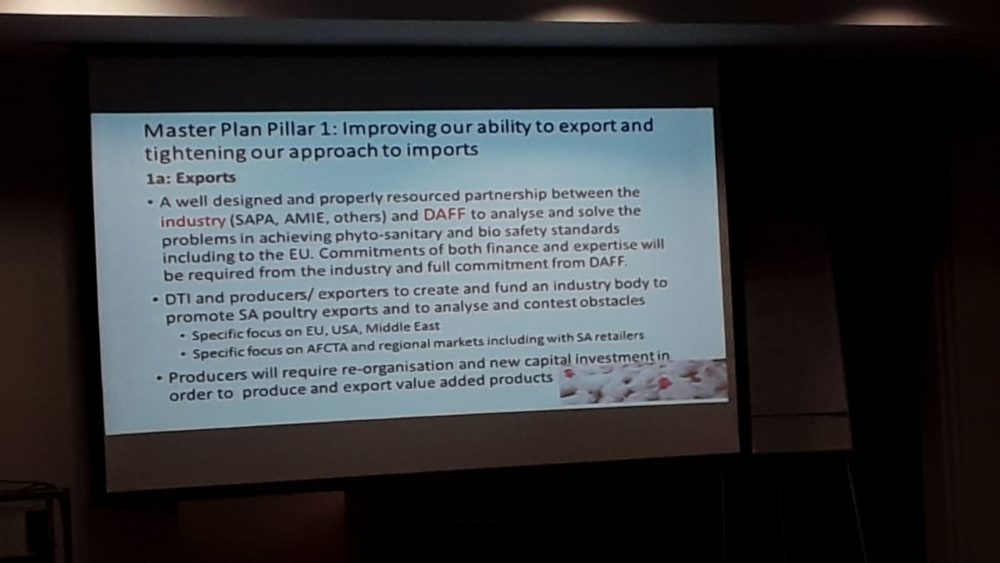 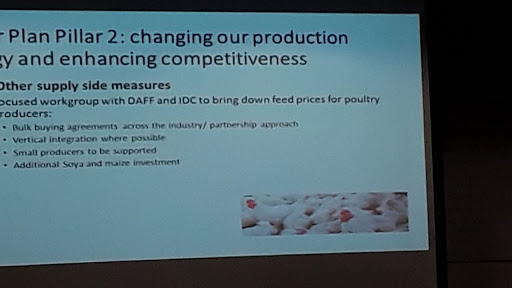 Pillar 3: Changing our marketing strategy in the local market and beyond. 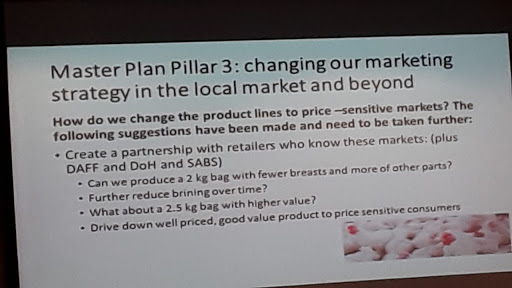 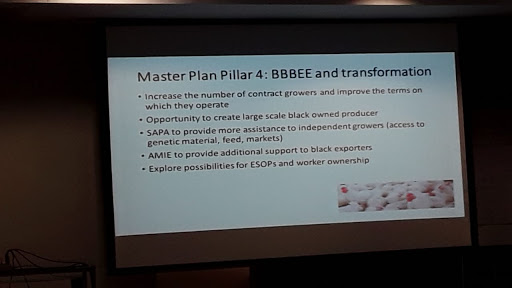 Spiers says the industry has committed only R6-million rand to pillar transformation, however, in the same breath the estimated cost of empowering smaller farmers and fully transforming the industry is around R1,5-billion.

No specific facts or figures in terms of envisioned black participants, or what portion of that should be female were provided either, she says. ,

“It is clear that industry is not fully committed to transformation, but neither is government,” she adds.

“It has been 25 years since the dawn of democracy and we still find a practice of reverse affirmative action in poultry.

Where certain market share like feed; day-old chicks and chicken product sales are still reserved for white players by the government through protection or inaction,” she says.

“Maintaining the status quo will dictate who will get the most lucrative in the retail; franchise and now the new EU export market opportunity, and that is white-owned companies.” BM