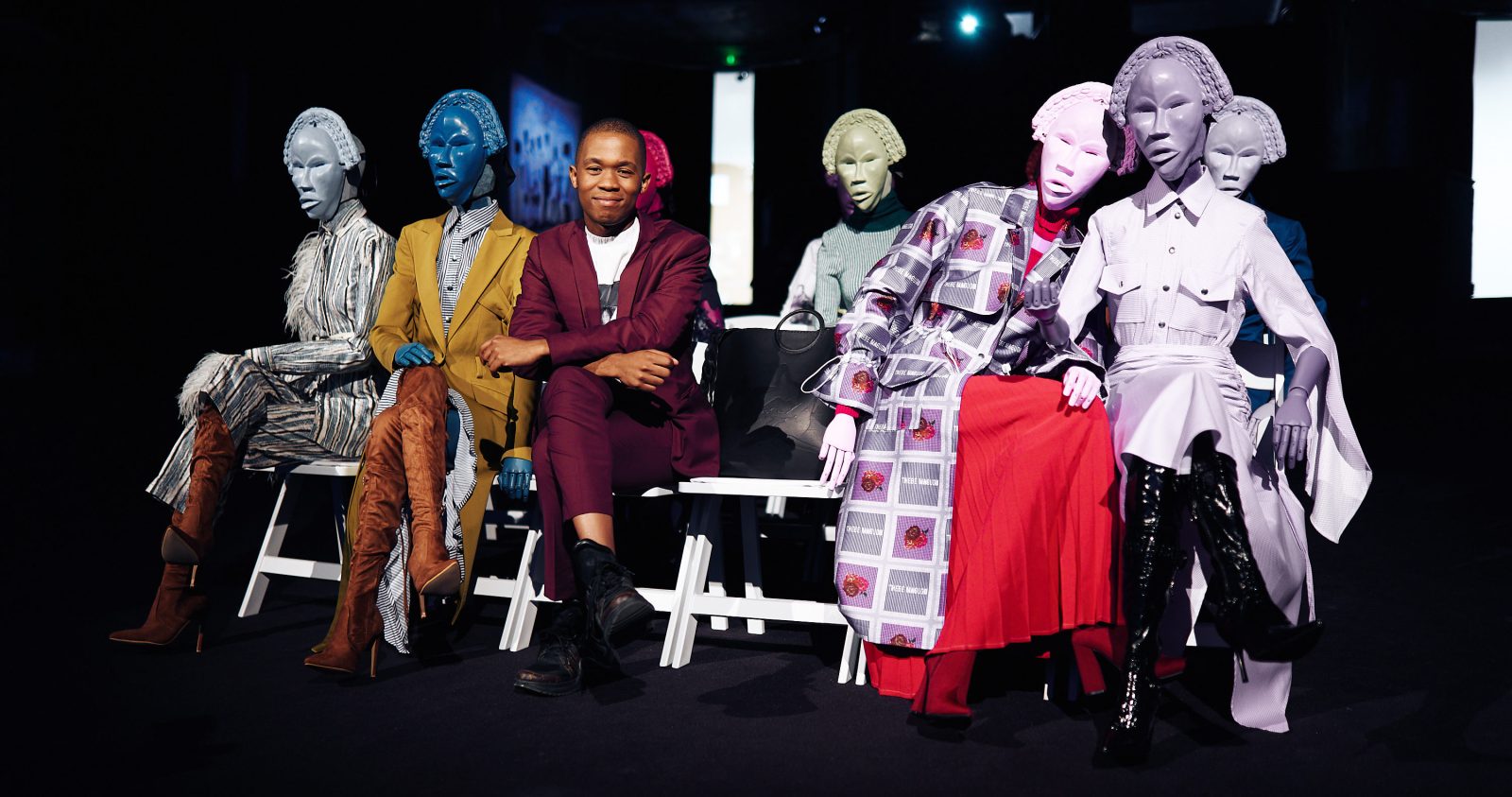 Since he won the LVMH Prize in September 2019, Thebe Magugu, a young fashion designer from Kimberley, has been caught in a whirlwind of opportunities. His latest break? Showing his eponymous brand’s Autumn/Winter 2020 collection at Paris Fashion Week.

It’s 3.30pm on 25 February at the Palais de Tokyo, Avenue du Président Wilson, and for the first time, Thebe Magugu is showing his Autumn/Winter 2020 collection, to a crowd of international fashion journalists, editors, buyers and guests during Paris Fashion Week.

Titled Anthro 1, a slight departure from his previous collections, all named after – and inspired by – a university subject that connected to what he was feeling at that particular moment, the range is informed by “the visual cues he saw growing up – like his grandmother’s kitchen tablecloth with step-and-repeat fauna (now imposed onto a utilitarian parka) and his aunt’s corrugated iron fence (now imposed onto a grainy crepe)”.

In 2017, Magugu launched his label Thebe Magugu with a collection named Geology, an ode to the outdoors and escaping urban landscapes, including references to hiking and fishing. In 2018, it was Home Economics, an exploration of the conditions in which women find themselves in today’s South Africa, followed by Art History, where he explored how people turn to art to deal with their personal traumas and demons, and African Studies, which became the collection that won the coveted LVMH Prize.

At the Palais de Tokyo, the 27-year-old designer opted for a different format than what is usually en vogue at fashion week:  instead of a runway show, he presented the collection as an exhibition, his garments surrounded by striking images shot by South African photographer Kristin-Lee Moolman and styled by Ibrahim Kamara. The project is called Ipopeng Ext., a homage to the township he grew up in, in Kimberley in the Northern Cape.

“Ipopeng Ext. showcases the many faces and places who mural Thebe Magugu’s work and served as his earliest and most poignant references – from the lush, humbling wild to an electrifying sense of culture and tradition. In Setswana, Ipopeng means ‘to beautify yourself.’ It also means ‘a tight-knit community, a close group of people’,” says William Kohler-Nudelmont, Magugu’s press agent in France.

Kimberley has always been a strong reference in Magugu’s work, a soft paintbrush subtly stroking his collections, adding colours, contrasts and intimate stories into the fabric of his garments, intertwining with every thread, defining every silhouette. It seemed essential, then, that he used the capital of Northern Cape as a reference for the collection he presented at his first international show.

“I can tell you so many stories about the people of Kimberley; about their self-sacrificial nature, their unconditional love, and inherent spirit of Ubuntu, even within an arid and often hostile environment. In fact, I often say that it’s these extreme contrasts – beauty vs brutality, extravagance vs economy, tradition vs modernity – that have fuelled my work. This is why this project, titled Ipopeng Ext., is so important to me. Ipopeng is the name of the township I grew up in,” says Magugu.

The images – just like the garments presented, all made in South Africa – are a direct reflection of Magugu’s personal childhood stories and the values that have shaped him: family, education and faith.

Here, a woman dressed in a tailored white shirt with cleverly placed cutouts, tucked in a velvet pleated skirt (a staple in Magugu’s collections) in deep forest green, tightly belted at the waist, topped with a beret, is surrounded by young students dressed in their school uniforms, a picture of a smiling Nelson Mandela raising his fist in the background; the image stands out as a salient symbol for tradition in contrast to modernity. There, a model wearing a fitted thigh-skimming blazer, in over-the-knee-high boots, is seen in a hair salon, wigs and hair accessories hanging on the wall; again, contrasts explode, between the raw reality of “beauty in the making”, hairpieces and extensions waiting to be used, and the model modelling, standing beauty.

A picture of two young women holding hands – the label’s new logo which shows two characters embracing each other is an ode to sisterhood – show them seated in front of a Virgin Mary, a commentary on the idea of “Sunday Best”.

And so the visual and tactile story goes on, at once familiar and surprising, modern and nostalgic, a journey between Thebe Magugu’s intimate vision and his incredible ability to translate South African tales and personal memories into fantastical collections.

“As part nostalgia and part activism. As part memory and part prophecy,” he says. It is that gentle equilibrium between two forces that make Magugu’s garments so desirable. It is the poise with which he sets the stage – it never looks overdone, or totally under control – that turns his collections into sartorial narratives.

The consistency of the designer’s work, his talent and focus have paid off.

“Thebe Magugu is relevant,” says Annette Pringle, a fashion consultant and expert behind the “Designer Tool Kit” programme at the Johannesburg Chamber of Commerce and Industry.

“What he designs, his talent, the product he puts out there, all of it is relevant to the fashion world and on point with the brand. He shows his narrative, African fashion, in a way the world has not yet seen before. It is new and fresh, relevant, very feminine and strong and even harsh at the same time.”

Following Magugu’s show, President Cyril Ramaphosa tweeted, “@_ThebeMagugu_ is the 1st African designer to win the highly coveted LVMH prize. His debut at Paris Fashion Week pays homage to his home country South Africa. The level of consciousness he brings to his artistry is most inspiring and distinguishes him from his contemporaries”.

But soon afterwards, @TemptingTony_ commented, “I wish you cared enough about creatives and the industry to make sure that people get the support that they need so that Thebe is not the last”, a tweet that echoes the concerns of many creatives and artists in South Africa as they struggle to live off their art.

“Almost every designer needs to have ‘a day job’ to sustain his/her own fashion brand [or] business. A lot of designers do styling services, art direction, influencer services or work in bars and clubs to make a living and pay the monthly (fixed) bills. Being in fashion consumes them completely. All successful designers I work with in South Africa went this route and really push hard for what their goals are,” explains Pringle.

She adds, “To be [that] determined to create a fashion brand operating and distributing against all odds and challenges out of Johannesburg, South Africa; creating jobs, putting food on the table for workers in South Africa, trains them to become better in their skill; I think it is [that] deep soul and realness people feel when seeing his collections.”

Since November, the South African designer has been on a mentorship programme with LVMH (Louis Vuitton Moët Hennessy) as part of the LVMH Prize. It has given him access to industry professionals and experts, a great help to propel his brand forward.

“When Adrian Joffe came with Rei Kawakubo [Japanese designer and the founder of the brand Comme des Garçons] to Thebe’s showroom in Paris on 1 October 2019, Adrian said to me: ‘Whatever Thebe does, do not change anything.’ I follow that advice. And my advice to Thebe [is]: Stay humble and keep your head in the right space, focus on what you want to achieve, creating more jobs and opportunities for African people by growing and expanding a global luxury sustainable fashion brand, coming out of [South] Africa. Believe. It is possible. We do it already,” says Pringle. ML