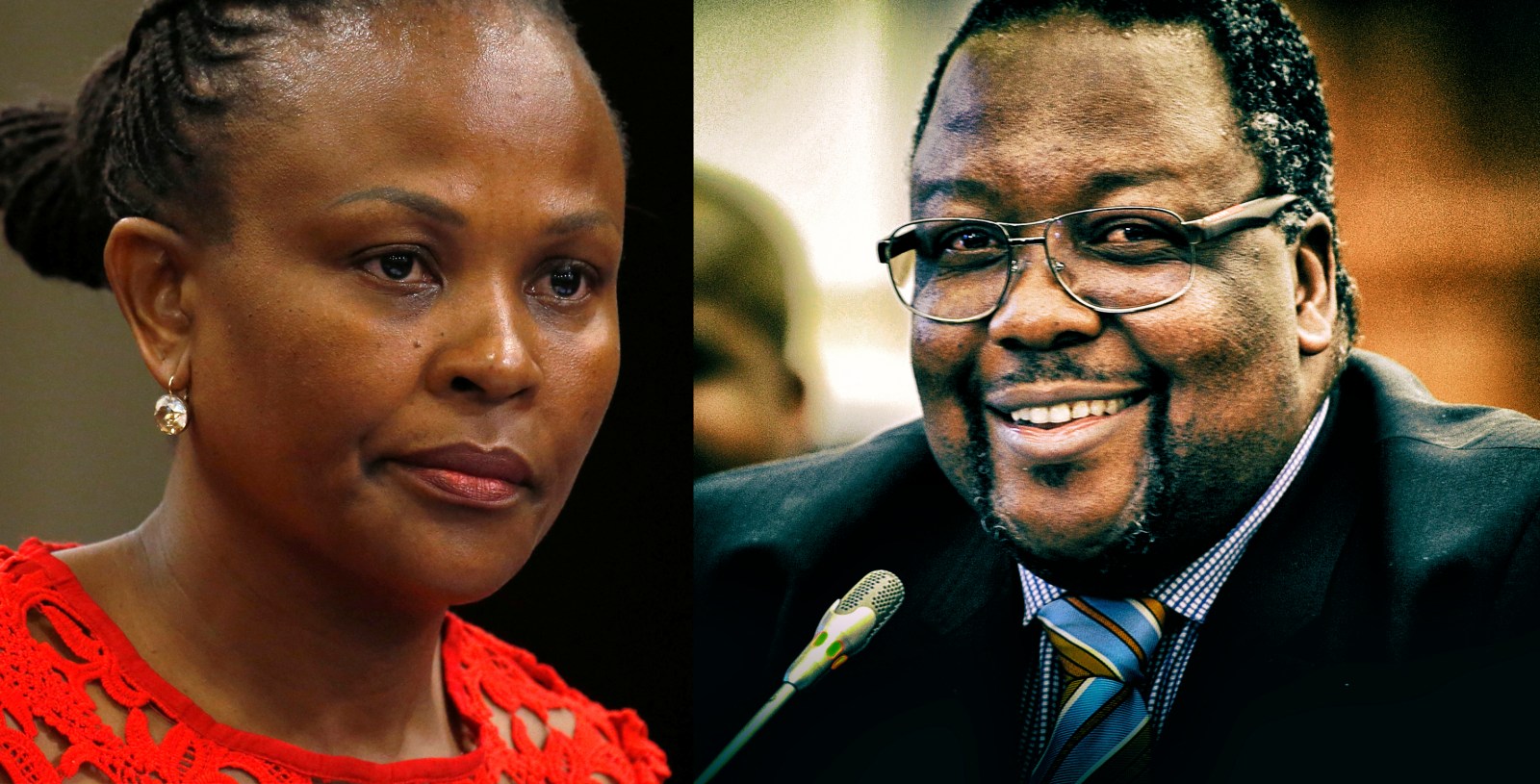 Before Nathi Nhleko popped up in media headlines after being seen at the offices of the public protector, he approached Daily Maverick to remove a story implicating him in the alleged illegal establishment of a covert military unit that operated outside of SAPS or Crime Intelligence structures.

Look, anyone going for an interview for a top and prestigious government job wouldn’t want stories that they have been implicated in the establishment of a Chinese-trained “death squad” floating around the web.

News24 reported on Tuesday 26 February 2020 that former police minister Nathi Nhleko, defender of the Nkandla firepool, had been seen leaving the offices of the public protector last week.

Posts for a COO and CEO have been vacant since tainted CEO Vussy Mahlangu left in 2019 and the departure of COO Basani Baloyi after accusing Public Protector Busisiwe Mkhwebane of “serious and ongoing violations of the Constitution”.

Nhleko, who has been at a loose end since being shuffled out of his Cabinet post in 2017, is clearly seeking gainful and meaningful employment in the government sector.

Which might explain why in December 2019 he approached Daily Maverick demanding that we take down a story we had published on 27 March 2019 following revelations to be made by former IPID head Robert McBride to the Zondo Commission.

In an affidavit filed with the commission, McBride set out that Nhleko had recruited and trained “an armed military unit operating outside the statutory mandate of SAPS, whose existence was kept secret, even from SAPS Crime Intelligence Structures”.

Daily Maverick was not the first to write about Nhleko’s key role in the alleged recruitment of the covert “death squad”. In September 2018 the Sunday Times revealed the explosive nature of McBride’s upcoming testimony to the Zondo Commission.

“State capture inquiry commissioners are to be briefed about a secret police death squad trained in offensive warfare and which was possibly involved in political assassinations, break-ins and harassment during the Zuma presidency,” said the Sunday Times.

Then, on 6 December 2018, the Zondo Commission received a call from a person claiming to be a member of a 16-person covert “hit squad”. The communication was confirmed by the commission. Commission investigators approached McBride informing him the caller had warned them that IPID “had no business getting involved in their covert activities”.

McBride then provided an affidavit to the commission detailing that the unit was a 16-member team, recruited in 2016 from mostly northern KwaZulu-Natal and trained in military combat in the People’s Republic of China. IPID had been investigating the unit and had, said McBride, screeds of evidence.

After training, said McBride, the members of the covert unit were trickled back into South Africa’s law enforcement agencies including the Hawks and Crime Intelligence.

Members of this unit were recruited by an NGO called Indoni, “a moral regeneration programme targeting the youth” founded by Nhleko’s wife, Dr Nomcebo Mthembu.

The unit had been operating covertly, said McBride, until July 2018 and had been reporting to “a specific command structure”.

McBride had been due to testify at the Zondo Commission in February 2019 but his appearance was postponed to allow at least 30 high-ranking government officials who had been implicated to respond.

Daily Maverick published the story in March 2019, based on the threat to the Zondo commission and on the sworn affidavit McBride had lodged. Before we published we emailed Nhleko and his wife offering both a right to reply.

This we did using an email address provided on government websites and contacted Mthembu through her website.

Our requests were met with silence.

In June 2019, Daily Maverick received a series of WhatsApps from young recruits who told us they were members of a “Chinese death squad” who had been abandoned. Some of the members said they had been sleeping rough on the streets of Pretoria after no one in SAPS or CI would talk to or employ them.

Desperate, they approached the public protector’s office in January 2019 and the office of the inspector-general of intelligence and the Presidency in May 2019 seeking help.

Public protector spokesperson Oupa Segalwe confirmed to Daily Maverick that a complaint had been received.

“The public protector is still assessing this matter. Whatever she decides after the assessment, she will inform the complaints accordingly.”

Recruits we interviewed provided us with photographic and other evidence of training undertaken at the Chinese People’s Armed Forces Academy in Langfang, China between March and May 2016.

The squad had also been trained in counter-cybercrime “at the best cybersecurity institution which was in Xiamen”.

Nhleko was shuffled out as minister of police in 2017, a departure that sparked the beginning of the end for the “death squad”.

“Even when we were in China, the officials that were training us were telling us what an honour it was for them to be training us as we were going to become such an elite squad. So they are very proud to be part of our history as we were being promised very high ranks once we got back home because it was clear that we were going to be in some sort of a coalition with China to help counter crime in South Africa.

“The sad part is that once we got back home we didn’t receive a single cent from our government for being deployed overseas and representing our country,” a recruit told Daily Maverick.

Nine months after we first published our first story in March 2019, in December 2019, Nhleko suddenly blipped onto our radar.

It was the same month Vussy Mahlangu resigned from the public protector’s office. It is not difficult to surmise that this is about the time Nhleko could have thought of applying for a job with the PP.

In a letter, Nhleko demanded that Daily Maverick remove the story and threatened to take us to the press ombud. That his complaint has been filed well outside of the deadline and out of the blue is significant.

We responded to Nhleko’s complaint by welcoming the fact that he had finally surfaced as we had been looking for him and his wife for some time. While the deadline for him to submit a complaint to the ombud had expired many months ago, Daily Maverick has been informed that this has been extended.

We have provided the ombud with our emails sent to Nhleko and Mthembu in March offering a right to reply to McBride’s serious allegations.

We welcome a ruling.

In the meantime, our investigation is ongoing and we will soon be placing evidence we have obtained before Nhleko and Mtembu as well as those involved in the Civilian Secretariat at the time for their right to reply and explain.

A report that fired former deputy head of public prosecutions, Nomgcobo Jiba, who attended Mkhwebane’s recent 50th birthday bash, had also been spotted at the offices remains unconfirmed… but you never know.