Explosive papers filed with the Pretoria High Court by Basani Baloyi, former Chief Operations Officer at the Office of the Public Protector, have offered the first inside view of alleged political interference and abuse of power.

Former Chief Operations Officer at the Office of the Public Protector Basani Baloyi filed a notice of motion at the Pretoria High Court on 7 November 2019 requesting the court not only reinstate her, but also find that Busisiwe Mkhwebane “violated her constitutional obligations… to act independently, impartially and to exercise her powers and perform her functions without fear, favour or prejudice.”

Office of the Public Protector CEO Vussy Mahlangu is named as the fourth respondent in Baloyi’s application. Baloyi is seeking personal costs from Mahlangu.

She has accused the CEO, among other allegations, of interfering in an investigation into the role of former minister of Rural Development and Land Reform Gugile Nkwinti in the unlawful 2011 acquisition of the Bekendvlei farm in Limpopo.

Mahlangu was the deputy director-general of the Department of Rural Development and Land Reform during the period Bekendvlei farm had been unlawfully procured. In 2016 he was charged with misconduct, found guilty on six of eight charges and dismissed.

“He was subsequently employed as the CEO [of the Office of the Public Protector], notwithstanding his dismissal for dishonesty,” said Baloyi in her founding affidavit.

In an interview with City Press’s Junior Khumalo and Mandisa Dlamini on Sunday 10 November, Mkhwebane lashed out at Baloyi, describing her actions as “those of a spy masquerading in the organisation with the only motivation of destroying the office’s credibility”.

She questioned why Baloyi had approached the high court on “a work-related matter” instead of turning to the labour court or the Commission for Conciliation, Mediation and Arbitration.

It is clear why Baloyi turned to the high court.

Her affidavit provides an explicit, lucid and detailed account, with accompanying evidentiary attachments (including a highly incriminating WhatsApp from the public protector to Baloyi) of clear political meddling in several politically charged complaints.

Baloyi has charged that Mkhwebane’s and her office’s behaviour in handling the SARS “rogue unit”, the CR17 Bosasa donation, an investigation into IPID as well as Prasa “was extremely unusual”.

She singled out early in her affidavit Mkhwebane’s actions with regard to the “rogue unit” and the CR17 R500,000 funding probe.

In a WhatsApp to Baloyi on 26 May 2019 and attached to court papers, Mkhwebane wrote:

“Coo. I worked with a few people to deal with the sabotage of the PG camp, the notice almost ready for rogue, will issue this week and report will also be issued in the manner I will determine.

“The notice for the President is also ready, will call him this week to discuss the notice. It is not about you but one has to play the chess.”

The following day Mkhwebane messaged Baloyi that “we meeting CR [Cyril Ramaphosa] on 30 May at 3pm at mahlamba. You part of the team, will give you hard copy to read and shred after.” 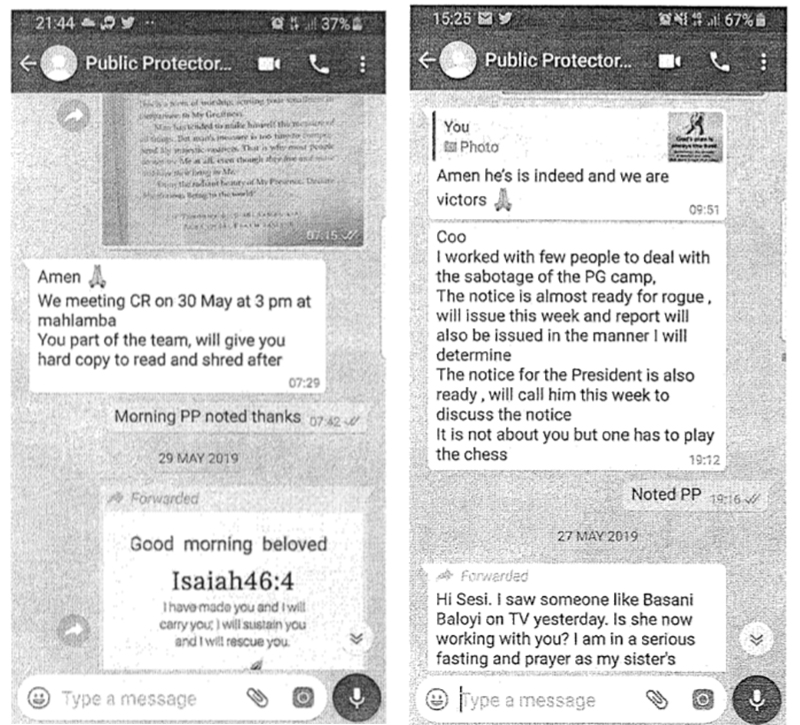 The instruction by the public protector for her to “shred” the document was, said Baloyi, “concerning”.

“That is certainly not usual practice in the office. I believe that the public protector wanted me to shred the s 7(9) notice because of a fear that the document would be leaked,” said Baloyi.

The former COO sets out that she had been present when Mkhwebane had interviewed Bosasa head Gavin Watson about the payment of a donation to the CR17 campaign.

“Mr Watson told the public protector that he donated not only to the CR17 campaign, but also the NDZ campaign.

“Yet the public protector refused to investigate the allegation about donations to the NDZ campaign, despite the fact that Mr Watson indicated that there were many donors who funded political parties.”

Baloyi said she and executive manager Mogaladi had suggested extending the scope of the public protector’s investigation to include the NDZ allegations, or to limit the investigation into the R500,000 donation to CR17, and to request the NPA to investigate other allegations.

After this Baloyi said she and Mogaladi “were excluded from these investigations”.

“I do not know these people”

It clear that shortly after her appointment on 1 February on a fixed, five-year contract after responding to a newspaper advertisement, Baloyi found herself in what appears to be a veritable vipers’ nest with Mahlangu leading the onslaught.

Mahlangu’s job was to deal with “admin matters” and, as CEO, was in no way mandated to be involved in “the merits of investigations”.

In her papers, Baloyi said her application to the high court for reinstatement was not about her personal position.

She said she “demonstrated in detail” how, in a range of high-profile investigations, Mkhwebane had “failed to act impartially and independently. In preparing reports and the timing of releasing reports, she has abused her office”.

Upon arrival as COO at the Office of the Public Protector, Baloyi said she had found a backlog of 466 cases that were older than two years. In the first two months, before the end of the 2018/19 financial year, she said she had resolved 284 of those cases.

During this time, neither the public protector nor the CEO had “identified specific instances of misconduct” on Baloyi’s part.

Baloyi said Mahlangu had begun to complain about her over an assorted range of issues, from Baloyi’s altering of deadlines for executive managers to her handling of an HR matter.

Mahlangu had also accused Baloyi of “mistreating a senior investigator” and had demanded that she remove a reference to Mahlangu in a forensic report into the Bekendvlei farm debacle.

“I viewed his conduct as a classic case of interference, given that he was conflicted.”

Baloyi had reported Mahlangu’s behaviour to the public protector.

“On 30 April 2019 I confronted her about the issue and the behaviour of the senior investigator who was managing this investigation. She told me to continue doing my work. She did not say she would do anything to stop Mr Mahlangu.

“My distinct impression was that she [Mkhwebane] was siding with Mr Mahlangu.”

With regard to the CR17 Bosasa and the “rouge unit” investigations, Baloyi said Mkhwebane had contracted “external people” who reported directly to her.

While the public protector sometimes relied on external investigators to aid her with reports, this was only done when the necessary skills or capacity were lacking in the office.

“This was not the case here. There was no legitimate reason why the complaints could not have been reviewed through the ordinary process.”

Mkhwebane had also “prioritised both reports”. In the normal run of the office, investigations usually took up to two years to finalise, said Baloyi.

“However, these reports were completed within a few months. This caused suspicions within staff members,” she said.

Baloyi also set out the public protector’s investigation into a complaint about IPID’s procurement and appointment processes.

“There are several problematic issues with the way the public protector handled the investigation.”

Not only was the ordinary process of preparing a report not followed, but the senior investigator, who is obliged to send the report to the provincial representative for review, instead “sent it directly to the public protector”, said Baloyi.

She added that when the report finally reached her office “I rejected it due to its poor quality” which had, in turn, prompted an admonishment from Mkhwebane who allegedly told Baloyi the report “should have been processed as it was”.

The IPID report had also been “rushed” as it had been lodged in June 2018 with the public protector’s report released in October 2019.

“The report was prioritised over other reports which were two years and older without any substantive justification. There was nothing about this complaint that distinguished it from other similar complaints.”

“One of those companies was called Prodigy. Prodigy approached Mr Mahlangu, the CEO, and laid a complaint against Prasa for failing to pay it.”

Mahlangu had “pressured” Baloyi and her team to consider this complaint.

On 26 September, Mahlangu had WhatsApped Baloyi that the complainant “feels she is being investigated instead of being assisted”.

“In our Derail report, we directed Prasa to investigate all irregular procurement, unfortunately Prodigy is specifically mentioned as [one] of the service providers urregularly (sic) appointed.”

Baloyi said throughout these incidents “I have either stood up to the public protector or the CEO, or been sidelined by them”.

“I believe that my refusal to accede to their manipulation of their powers is the real reason they unlawfully sought to remove me as the COO.”

She said the matter was “plainly urgent” as “the public protector and the CEO “are currently and will continue to harm the Office of the Public Protector”.

“That is a serious and ongoing violation of the Constitution. The harm that will be done to the office — and to other employees, complainants and subjects of investigation — in the meantime, cannot be undone… That harm cannot be undone.”

The application is due to be heard in the week of 18 November which will afford Mkhwebane and Mahlangu “sufficient time to answer the application”.