In the Name of Zuma

In the Name of Zuma

Members of a ‘death squad’, recruited by former Minister of Police Nathi Nhleko and trained between March and May 2016 by the elite Chinese People’s Armed Forces Academy, are living in a twilight zone, seemingly left to fend for themselves and in fear for their lives.

When an approach to the Office of the Inspector-General for Intelligence as well as the Public Protector yielded no result, these “top secret agents of the state” on 30 May 2019 delivered a memorandum to the Presidency.

Among the demands were that members are “given all benefits that everyone has” including medical aid and housing, danger and clothing allowances. 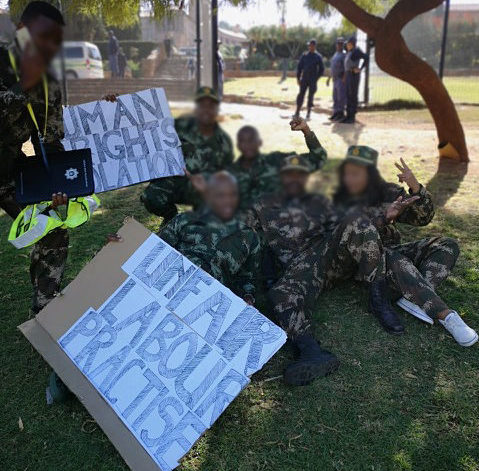 They have also requested to be “placed correctly as police officials” and “to be given proper ranks within the SAPS system”. Nhleko’s recruits also begged President Cyril Ramaphosa for protection “since our lives are in danger, we might be assassinated at any time”.

While the Presidency has been unable to trace a receipt of the memorandum handed over, Daily Maverick has seen a stamped copy that was received at the Union Buildings on 30 May 2019 by Vincent Ngcobondwane of the Presidency’s Internal Security Unit. 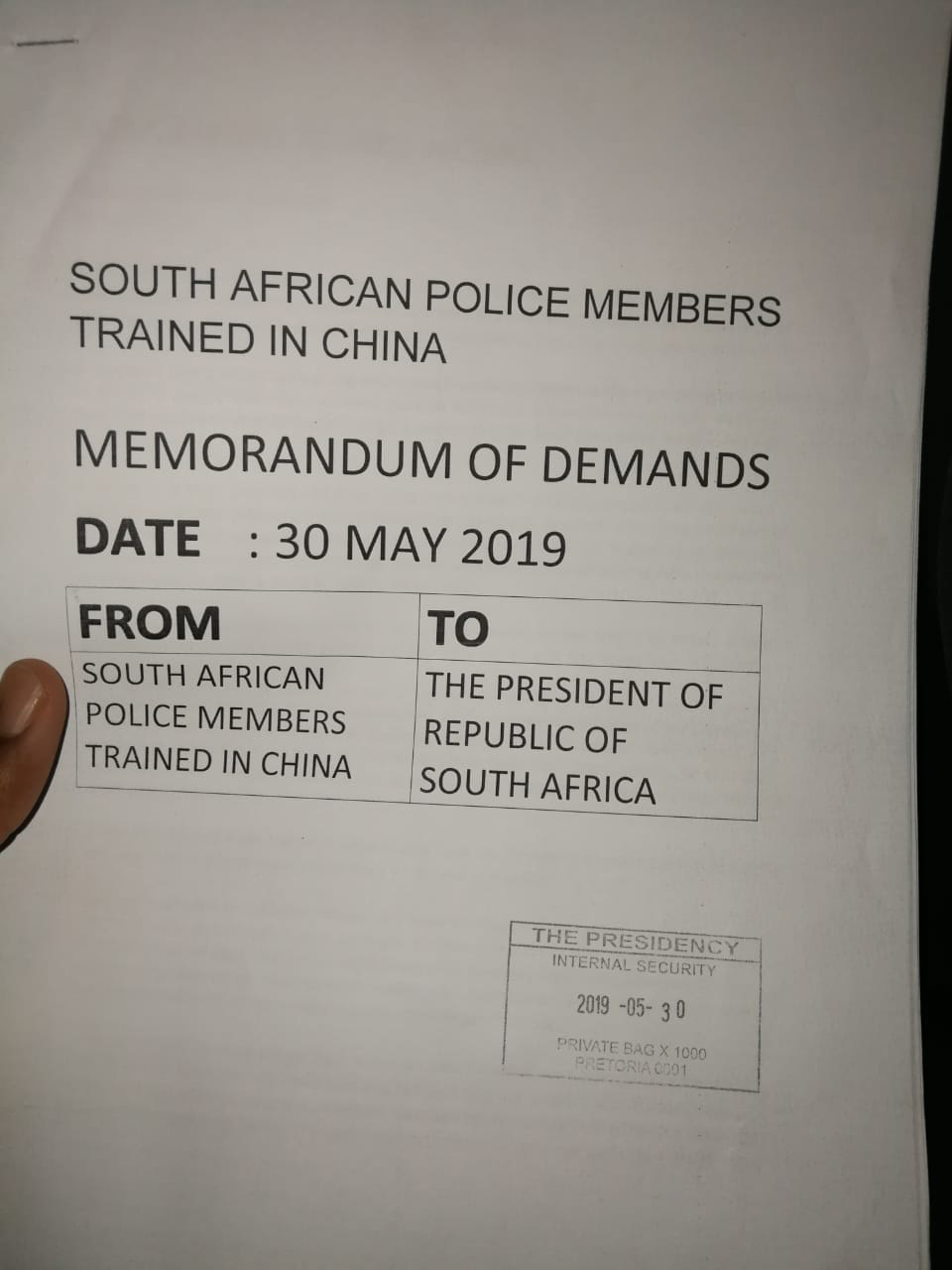 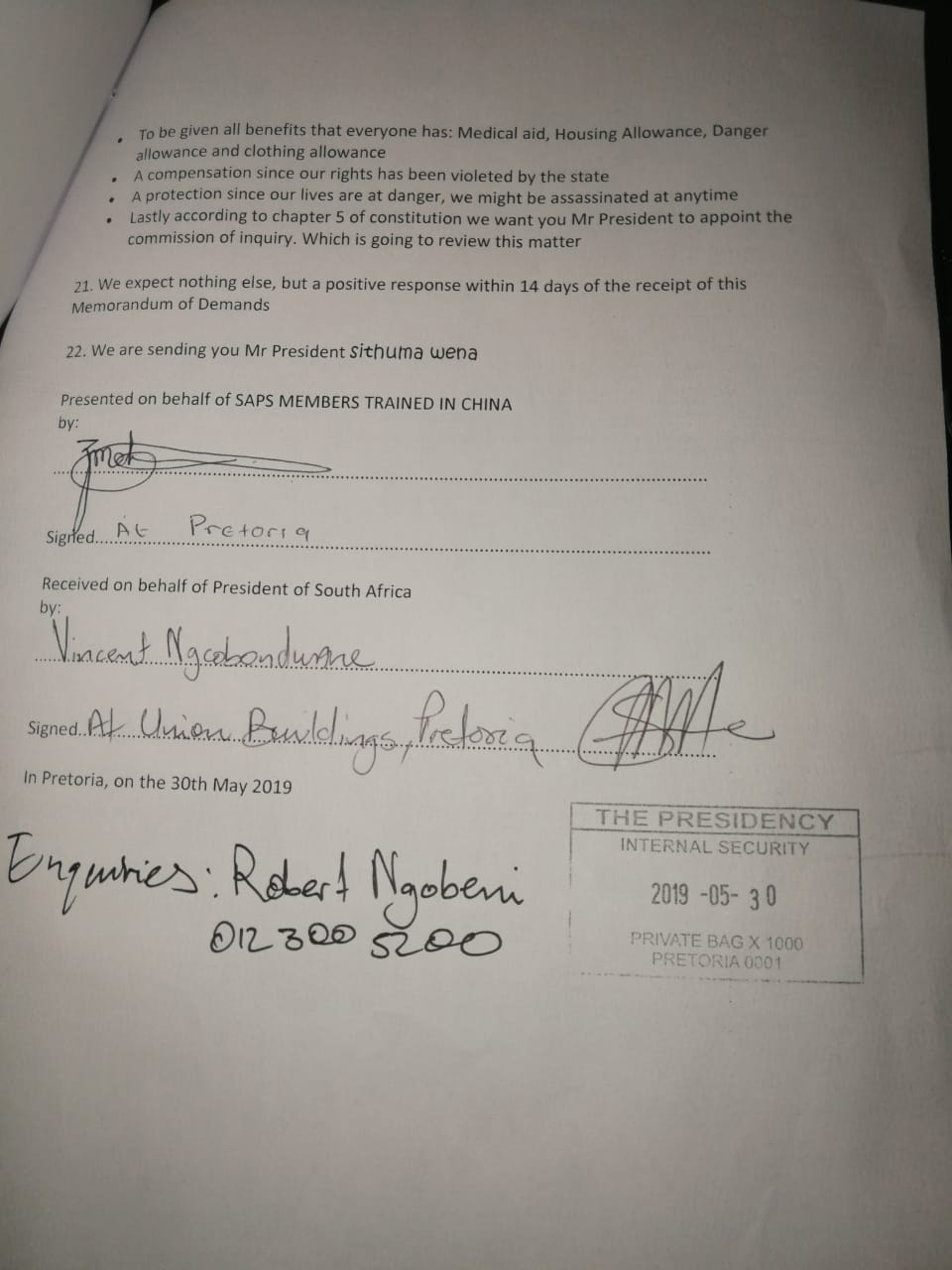 In March 2019, in his submission to the Zondo Commission, former IPID executive director Robert McBride outed the 16-member China-trained “death squad”, recruited in 2016 by Nhleko through his wife Nomcebo Mthembu’s NGO, Ndoni.

Daily Maverick contacted Ndoni and Mthembu through the NGO’s website asking how the organisation came to play a role the recruitment or whether any payment had been made. We had received no reply at the time of writing.

The squad, McBride said, their training completed, was then “trickled” into law enforcement agencies including the Directorate of Priority Crime Investigation (Hawks) and Crime Intelligence. McBride added that at first these recruits had been welcomed into the bosom of the Hawks, led by the now-disgraced Berning Ntlemeza, and were later fed off to Major-General Dumezweni Zimu, Crime Intelligence counter- and security-intelligence head, also appointed by Nhleko.

But it all ended when Nhleko and Ntlemeza found themselves out of their jobs.

The young recruits are now in a twilight zone, abandoned, without benefits, and living in fear of their lives, employed as security guards at Crime Intelligence headquarters in Tshwane.

Some of them are so destitute they have been forced to sleep on the streets, a member of the “death squad” (who has asked not to be named) told Daily Maverick.

A spokesperson for the group of disgruntled members said they had been “made to work at the gates of the National Head office of Crime Intelligence without any form of weaponry as we also work night shifts”.

“We also do not get even a single government benefit like clothing allowance nor danger allowance and the most shocking part is that we don’t even have medical aid, so if by any chance we get injured on duty, we can’t even get any proper medical treatment. The saddest part is that even till today there are some members that are still suffering from illnesses that they get got while we were in China, and yet we still can’t even get proper medication since we don’t have any form of medical aid, yet we work at National Head Office of Crime Intelligence and we once represented our country overseas.”

On 23 January 2019, the Public Protector’s Office, through executive manager CSM Nthoriseng Motsitsi, after a complaint had been lodged on behalf of “death squad” members, wrote “your complaint will be assessed so as to take a decision whether the Public Protector should investigate and whether we are the best institution to handle the matter”.

Contacted by Daily Maverick, spokesperson for the Public Protector, Oupa Segalwe, responded that at present there was no investigation.

“The Public Protector is still assessing this matter. Whatever she decides after the assessment, she will inform the complaints accordingly,” said Segalwe.

On 22 May 2019, recruits describing themselves as “SAPS MEMBERS TRAINED IN CHINA (KNOWN AS A DEATH SQUAD)” issued a media release as a desperate and last resort.

“This is the fourth year since we have been trained overseas as special agents of the State and we have been made to keep quiet about certain secrets that have been ended up costing our human rights to be violeted (sic). We have been neglected by the Ministry of Police, Public Protectors office and we lost the confidence in Inspector-General, which is why we talking the matter to the President,” said the media release.

The background to the sorry saga is that, in 2016, 19 recruits, 10 men and nine women, had been drawn from across the country — some through Mthembu’s NGO Ndoni, a “moral regeneration programme targeting the youth”.

The recruits were sent for intensive paramilitary training at the Chinese People’s Armed Forces Academy in Langfang, China between March and May 2016. 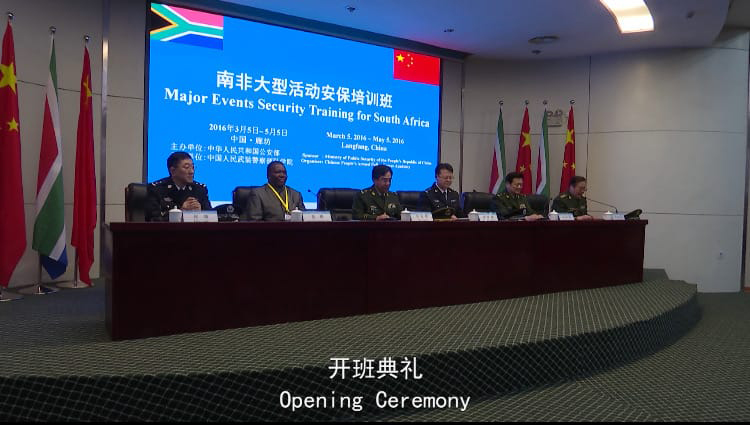 One of the members told Daily Maverick that they had been told they were being recruited “to be top secret agents of the state”. Recruits, said a death squad member, had been told that “this is a big project that has been planned by Jacob Zuma and the Chinese president”.

Some of the recruits had dropped out of school or had resigned from jobs to join the squad, said the spokesperson.

“All of our lives were put on hold as we were sold a very big dream, only to be deserted by our government at the end.”

The South African squad had also been trained in 2016 how to counter cybercrime “at the best cyber security institution which was in Xiamen”.

“Even when we were in China the officials that were training us were telling us what an honour it was for them to be training us as we were going to become such an elite squad, so they are very proud to be part of our history as we were being promised very high ranks once we got back home because it was clear that we were going to be in some sort of a coalition with China to help counter crime in South Africa. The sad part is that once we got back home we didn’t receive a single cent from our government for being deployed overseas and representing our country.”

Three recruits had dropped out as “the training was intense” and they had fallen ill. Recruits who finished the course were told, said the spokesperson, not to look for other jobs as “we were still under SAPS and must be patient as we are on standby”.

The recruits were eventually taken to a “safe house” in Pretoria where they were given individual offices, but told to look for their own accommodation.

“Bear in mind that more than 10 of our members didn’t know anyone in Gauteng and were all flat broke since we weren’t earning any salary for over eight months so we were basically stranded to sleep on the streets, yet we were members of the state.”

Upon their return to Pretoria, Nhleko’s squad was sent to Mphata Lodge in Hammanskraal for “a crash course by members of Crime Intelligence as this was a strategy for other members from SAPS not to detect us as we had to be as discreet as possible since we were being strategically placed undercover to counter other officials of the state which were corrupt”.

Post-training at Mphata Lodge, some “death squad” recruits were sent to the Beitbridge border with Zimbabwe “to work as undercover police officials and to observe the crimes that occur within the border.”

Some members of the squad were also sent to Pafuri near the Mozambique border, while others were “sent to Durban at the sea harbour where we were sent to work as undercover cops and to also see how they operate at the sea border”.

The government had paid for transport and accommodation for all of these assignments.

“The surprising part was that we were made to sign a contract which stated that we were security guards and we were told it’s a legend (story) to make us undercover, since we were.”

After one of former president Jacob Zuma’s Cabinet reshuffles in 2017, Nhleko was appointed Minister of Public Works (a portfolio in which he authored his magnum ‘firepool’ opus exonerating Zuma from any responsibility for the publicly funded R246-million renovation of his home at Nkandla).

He was replaced by Fikile Mbalula as Minister of Police. One of Mbalula’s first moves was not to appeal against a court judgment that Hawks head Berning Ntlemeza had been irregularly appointed (by Nhleko, of course).

Things had come to a head after the appointment of Major-General Peter Jacobs to head Crime Intelligence in March 2018. The recruits allege that they were “treated like criminals” and have since been banished to guard the gates as lowly, unarmed security guards.

“We feel as if we have been deserted by our government that we sacrificed so much for while we represented it overseas and now they are burning us alive.”

The spokesperson for the “death squad” asked Daily Maverick to “please mention we are seeking for help to anyone who can help us since we were told that there’s no way we can win this case at court because we don’t have money. If there’s any organisation or political party that would like to assist us with any legal assistance we will accept it.” DM