Museveni agrees to smoke out Rwandan ‘terrorists’ on Ugandan soil 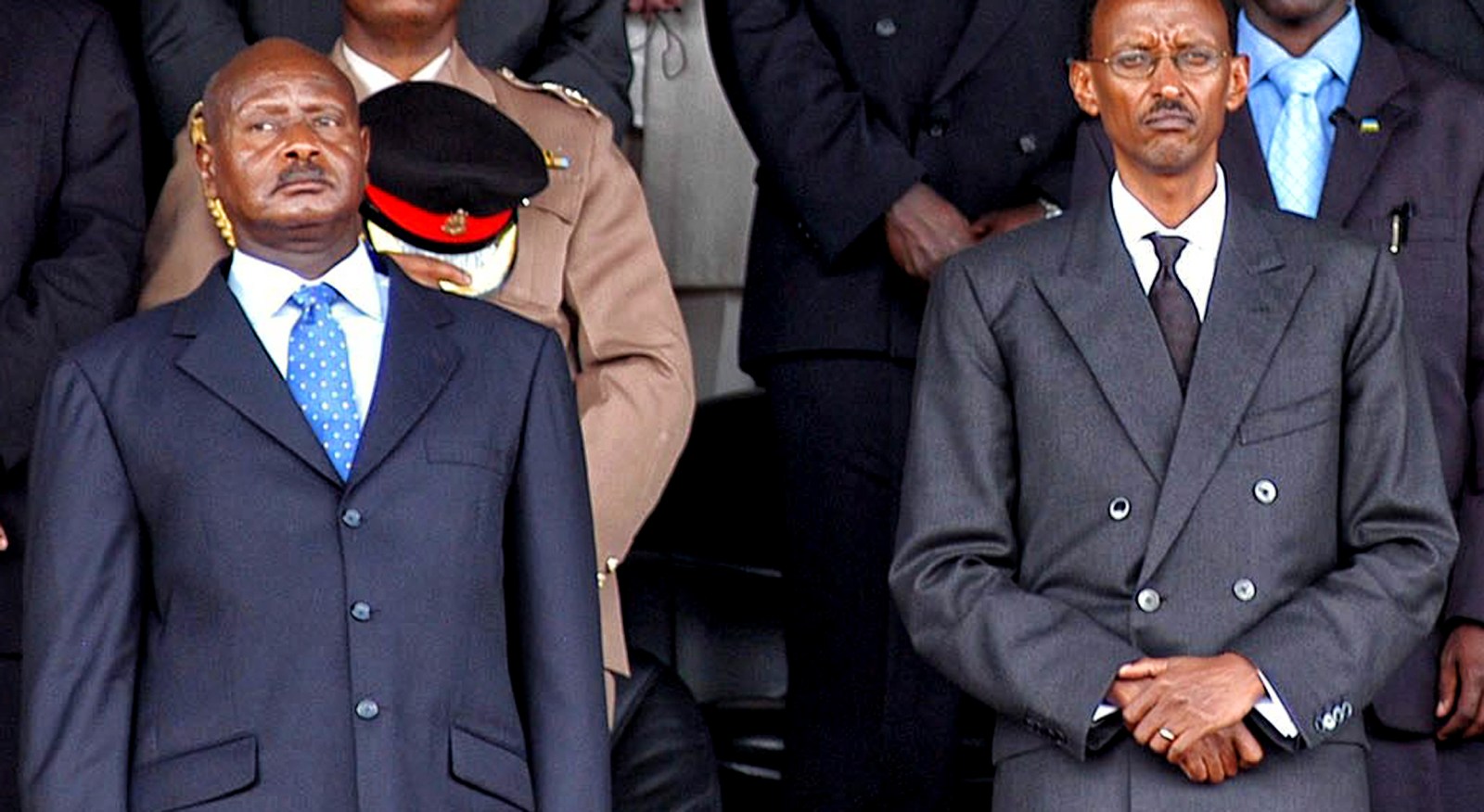 But if Uganda’s president can’t find any to expel, will that keep the Uganda-Rwanda border closed?

The effects of the bitter standoff between Rwanda and Uganda’s presidents, Paul Kagame and Yoweri Museveni – old allies, have been felt mostly by small traders and other innocents. It is they who have been prevented from crossing the border between the neighbouring countries to buy or sell. Some who tried to circumvent the border closure a year ago were shot dead by over-zealous Rwandan border guards.

It’s yet another example of that rather clichéd African proverb that when elephants fight, the grass gets trampled. Ironic too, since Kagame has been such a fervent advocate of the African Continental Free Trade Area agreement which intends to open trade across Africa’s borders.

The political pachyderms in this instance have essentially been fighting about Kagame’s accusation that Museveni is harbouring the dissident Rwanda National Congress (RNC) and other “terrorist” organisations who are trying to topple Kagame by force. Museveni has retorted that Kagame has infiltrated his country and even his government with agents. Kagame hit back by alleging that Museveni has been arresting, torturing and even killing innocent Rwandans. And so on.

Last Friday the two leaders participated in the fourth quadrilateral summit through which the presidents of Angola and the Democratic Republic of the Congo (DRC) have been trying to mediate an end to the protracted spat.

The previous summits took place in Luanda. The second, on 21 August last year, concluded with the Luanda Memorandum in which Museveni and Kagame agreed in principle to defuse tensions, mainly by releasing each other’s prisoners. Friday’s was the first summit on the border between Uganda and Rwanda, in the busy town of Gatuna (as it is called by the Rwandese) or Katuna (by Ugandans).

The venue was chosen because Museveni and Kagame were expected to resolve their differences right there and preside over the formal reopening of the border. But they deferred that decision until after Uganda had “verified” – within one month – Rwanda’s allegations about “actions from its territory by forces hostile to the government of Rwanda. If these allegations are proved, the Ugandan government will take all measures to stop it and prevent it happening again”.

Uganda’s actions would in turn have to be confirmed by an ad hoc ministerial commission of the four participating states set up to implement the Luanda Memorandum. When this was done and reported to the four countries’ leaders, they would meet again at Gatuna-Katuna in 15 days to reopen the borders and normalise relations between the two countries.

So it seems the pressure is on Museveni to kick out the RNC and other dissidents, or – in Kagame’s view – “terrorists”. Whether he will do that is the question. The signals he’s sent out so far couldn’t have been encouraging to Kagame.

The Ugandan presidency’s website reported Museveni as telling local Ugandans after the summit that the spat and the border closure emanated from internal conflicts in Rwanda, especially within the ruling Rwandan Patriotic Front (RPF) party. Some RPF members had disagreed with the Kigali government and most of these had taken refuge in South Africa, the report said.

It is true that RNC leader Kayumba Nyamwasa, Kagame’s former military chief of staff, has been living in exile in South Africa since 2010. Rwanda’s former intelligence chief, Patrick Karegeya, arrived in South Africa even before that.

Several attempts have been made against Nyamwasa’s life and on New Year’s Eve 2013 Karegeya was murdered in a Johannesburg hotel. This caused a breach in Rwanda-South Africa relations which has still not been entirely mended. Rwanda has also accused Uganda of helping Nyamwasa recruit rebel forces in the region to attack Rwanda.

In the same report on the Ugandan presidency’s website, Museveni is quoted as denying Kagame’s allegation that some RPF dissidents were living in Uganda. Museveni also denied holding any Rwandans, saying those his government had arrested had already been handed back to Rwanda.

He also reportedly said he’d ordered the pardon and release of any Rwandans arrested in Uganda for (political) crimes such as espionage and kidnapping of people on Ugandan soil. But those arrested for (ordinary) crimes such as murder and rape would face trial under Ugandan law.

Though Museveni’s government reportedly cancelled the passport of a leading RNC member, Charlotte Mukankusi, RNC sources told ISS Today that they didn’t believe he would, because of Friday’s agreement, expel RNC members in Uganda. This is because they were “peaceful people” and thus protected from expulsion or extradition by international humanitarian law and the Ugandan constitution.

And Museveni’s remarks to his people do seem to confirm their confidence, since he is denying the essence of Kagame’s accusation that he is harbouring ‘terrorists’ trying to topple Rwanda’s government. In a report on Tuesday, Rwanda’s New Times – widely regarded as a mouthpiece for Rwandan military intelligence – reacted angrily to Museveni’s ‘stunning’ denials, saying “he was clearly spoiling for a fight” and trying to undermine the Lusaka process.

None of this bodes well for Rwanda and Uganda resolving their conflict and reopening the borders in 45 days’ time. And it isn’t quite clear how that could happen. This whole quadripartite summit initiative seems to be part of Kagame’s wider campaign to get rid of his political enemies, by whatever means necessary. South Africa isn’t the only place where they have been eliminated, or apparently so.

Last week the popular gospel singer Kizito Mihigo died under suspicious circumstances in a Rwandan prison. Once a national hero for helping to compose the national anthem, he fell out with Kagame in 2014 after writing a song that mourned the victims of revenge killings. This was a reference to those killed by the RPF army after the genocide. Museveni may well feel that such RNC members as there may be in Uganda are innocent.

There’s a popular belief that democracies don’t wage war on each other. The standoff between Rwanda and Uganda seems to illustrate the flipside of that argument: that autocrats – de jure, or in the case of these two, de facto – are inherently antipathetic, especially when neighbours. Like Kagame, Museveni has also cracked down on his political opponents, including the musician and politician Bobi Wine.

Each clinging to power by sometimes violent suppression, such leaders inevitably drive opposition underground or across the borders, which often aggravates external relations. So it’s hard to see how Uganda-Rwanda relations can be patched up without fundamental reforms by both presidents at home. DM