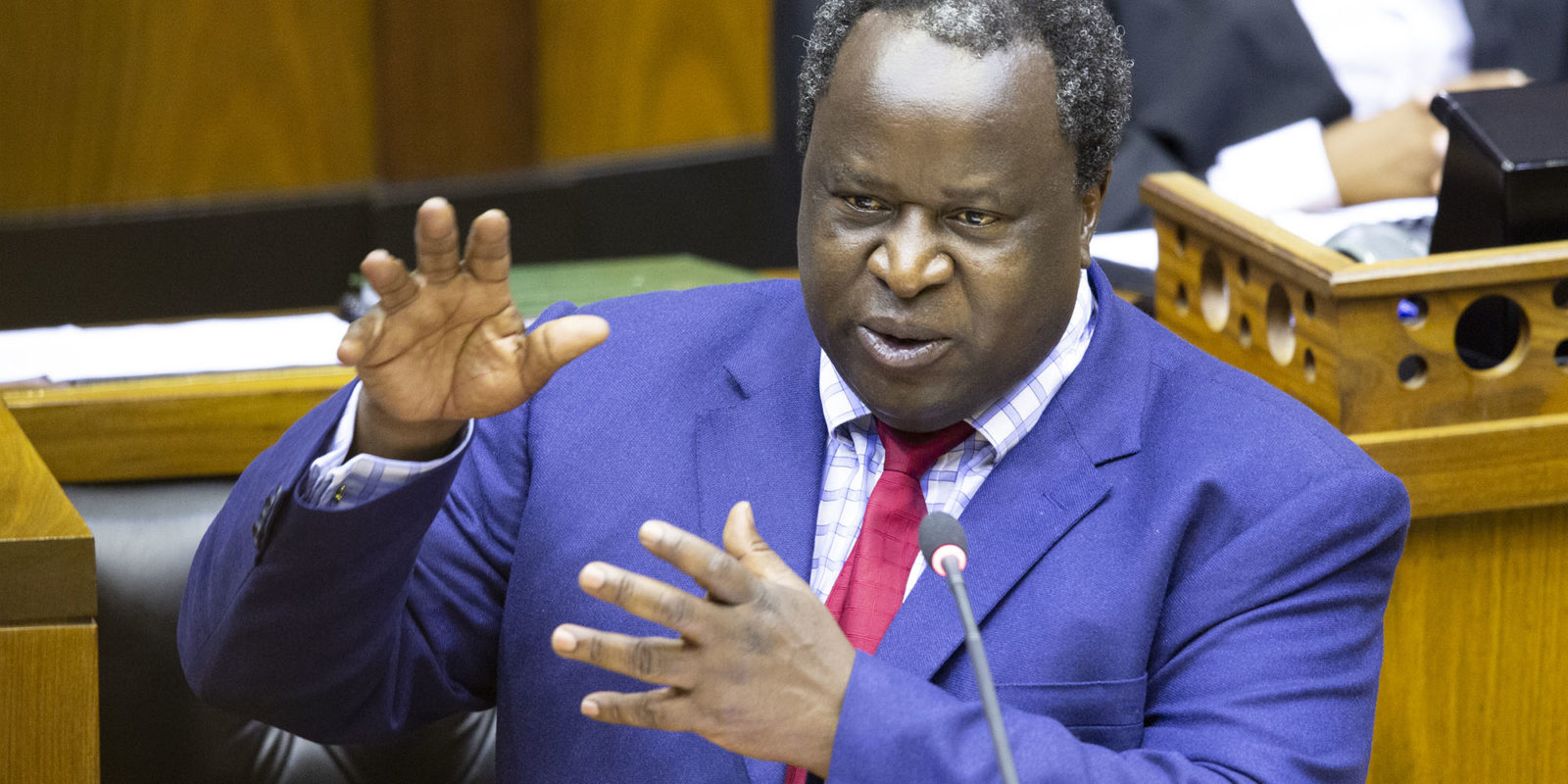 Exactly what gives will be answered when Finance Minister Tito Mboweni presents the Budget on Wednesday. Worst case scenario: Snafu*.

The easy bit is to recount the numbers: 0.4% economic growth in 2019, 38.7% joblessness on the broader definition that includes those so disheartened they’ve given up the search for work — and consumer and business confidence in the doldrums regardless of what measure is used.

The scary bit is to recount some other numbers. A shortfall of several tens of billions of rand in estimated tax collection — the October 2019 Medium-Term Budget Policy Statement (MTBPS) put that number at R52.5-billion, or 4% short, and rising — amid business failures, retrenchments and low wage increases. Billions of rand may fly SAA’s way as the R5.5-billion for the business rescue process since 6 December 2019 will run out in early March 2020.

As much as the Budget is about numbers, it is much more about politics.

And the politics mean no to even a one percentage point hike to Value Added Tax (VAT). The blowback from the 2018 VAT hike to 15% was brutal, and with a municipal election in 2021 the governing ANC, which is looking to reverse two consecutive election declines, would be reluctant to risk negative sentiment.

The politics also mean no to the privatisation of state-owned entities (SOEs). To illustrate: When Mboweni recently tweeted that a referendum should be held on whether taxpayers’ money should bail out SOEs, the trade union federation Cosatu’s response was sharp and rapid: the finance minister should be disciplined by his boss, President Cyril Ramaphosa.

That tweet was not the first time Mboweni had raised the ditching of SOEs causing haemorrhages in South Africa’s public finances.

“Isn’t it about time the country asks the question: Do we still need these enterprises? If we do, can we manage them better? If we don’t need them, what should we do?” he asked in Budget 2019.

The tough political decisions Mboweni called for then, and again in the October 2019 MTBPS, have yet to be realised in a meaningful way beyond the current talk, and what Intellidex analyst Peter Attard Montalto calls “the treacle of rhetoric”.

SOEs, particularly SAA and Eskom, have continued to receive bailout billions, regardless of the strained public purse in what many regard as a win for politics and ideology. In a large measure, this is underscored by the recent governing ANC National Executive Committee (NEC) lekgotla decisions, including that SOEs remain central to the developmental state. With the slightest nod to SOEs’ fiscal drain on the national coffers, it was agreed to rationalise numbers — a presidential review committee recommended that in 2012 — and to strive for “efficiencies”.

Indications are Budget2020 will have some politics based givens.

One is a state bank as a deposit-taking institution. Mboweni tweeted as much. His deputy, David Masondo, has been working on this from as far back as July 2019.

Eskom may also again be a beneficiary of support.

“At some stage, unfortunately, the money must come from somewhere — whether it comes from tariff increases or an equity injection,” CEO Andre de Ruyter told Scopa last Tuesday, explaining the situation right now was not sustainable.

A firm agreement — a social compact on electricity, as Ramaphosa put it in his SONA2020 — may emerge over Cosatu’s proposal for R250-billion of Eskom’s R450-billion debt to be taken on by the Public Investment Corporation (PIC), the government-owned asset manager of some R2-trillion of government employees’ pensions and social savings.

While power is “not like instant coffee”, as Mineral Resources and Energy Minister Gwede Mantashe put it at last Wednesday’s briefing, socio-economic damage is being wreaked by the lack of focused urgency to ensure Eskom gets the extra 5,000MW additional power it says it needs.

But whether Budget2020 will have any rands and cents for non-Eskom renewable power projects — both for emergency production within the six-month or the longer-term bid window system — remains to be seen.

Independent Power Producers (IPPs) in the renewable energy sector could provide a relatively quick solution on top of the 2,200MW from window four projects currently underway. But the trade unions at Eskom are opposed to IPPs, largely, although not wholly, over fears of job losses.

A not insignificant opposition is also ideological and not only in trade union ranks — independent renewable power projects are outside the state, and the ruling party is determined the state must own and control strategic assets such as energy or airlines.

And so it’s politics — again.

If the politics of energy are complex, the public wage bill is a political minefield.

Accounting for some 38% of government expenditure, public servants’ salaries have increased at rates above inflation over the past decade. A new three-year agreement starts being negotiated from May or June 2020.

Mboweni has been looking for a reduction in the public wage bill, but the Budget2019 offer of early retirement without the usual Government Employees Pension Fund (GEPF) penalties received an at best lukewarm reception.

When Ramaphosa in Sona2020 indicated engagement with organised labour and others on “measures to contain the public wage bill and reduce wastage”, the reaction was an almost immediate dismissal of potential wages cuts or freezes.

It’s politics. The majority of public sector trade unions belong to Cosatu, which in turn is part of the tripartite alliance with the ANC and the South African Communist Party. That means Cosatu unions carry clout.

With Cosatu, the ANC and many others supporting the National Health Insurance (NHI) — meant to provide access to quality health care to all, not just the 16% with private medical cover — money must be found now to pave the way, as the public health system is run down. But the public purse is depleted. In his reply to the parliamentary Sona debate on Thursday, Ramaphosa cautioned:

“The pace and the scale at which we implement the NHI will be determined by the available resources.”

This was a signal to dampen political allies’ expectations — that’s politics.

Cutting costs in government, as in previous years, is one way to make up rands and cents for the national purse. But after years of such measures, there really shouldn’t be any more catering costs or other frills to cut. If there are, that raises some uncomfortable questions about government commitment to savings in these difficult times.

Departmental allocations already have been rejigged with so-called underperforming programmes cut and their funds moved elsewhere. Such moves are dressed up, in bureaucratic lingo, as “rationalisation”, “creating efficiencies” and “stopping leakages”.

It sounds like a good thing, but essentially it’s plugging fiscal holes in an effort to show the glass half full, rather than draining towards empty.

Taxpayers’ pockets are worn out. Even though the headline inflation rate stands at 4.1%, food inflation and increases in medical aid and medicine prices, petrol and transport costs and other hikes have been significantly above inflation.

More government debt may still be an option in Budget2020. But already debt repayments are the largest growing expenditure item, up by some 11%, or from R184-billion in 2018 to R202.2-billion in 2019. South Africa repays R1-billion a day, excluding weekends, as Mboweni put it in Budget2019.

Ramaphosa in Sona2020 outlined the quagmire that is South Africa’s political economy:

“We need to fix our public finances”.

“Low levels of growth mean that we are not generating enough revenue to meet our expenses. Our debt is heading towards unsustainable levels and spending is misdirected towards consumption and debt-servicing rather than infrastructure and productive activity,” said the president. “We can not continue along this path. Nor can we afford to stand still.”

Mboweni as finance minister has drawn the short straw. The public purse is frayed. Yet there is a long list of political wants.

Something has to give. DM

*Snafu: situation normal; all fucked up.