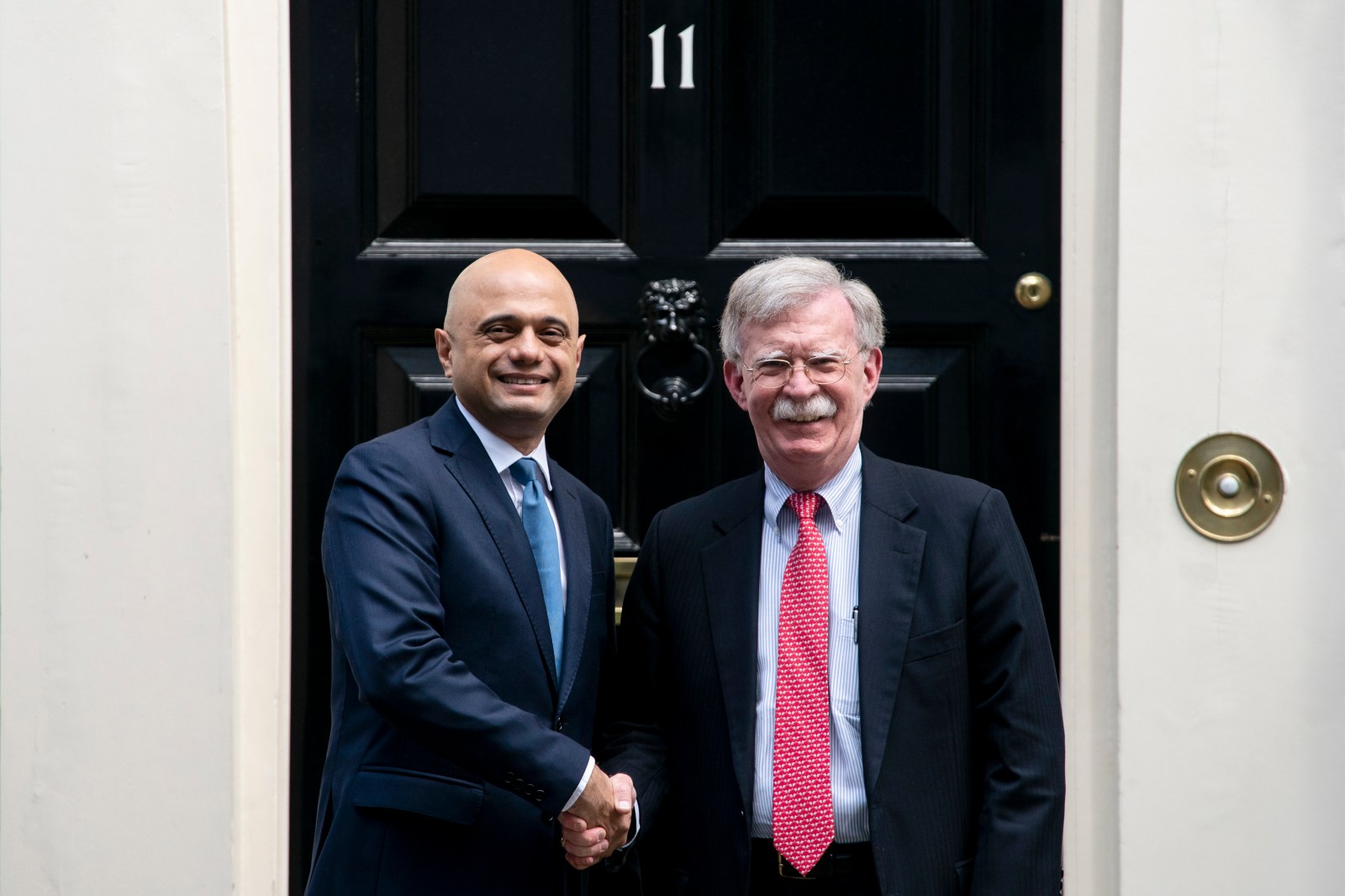 The British minister who approved the controversial US request for the UK to extradite publisher Julian Assange attended six secretive meetings organised by a US institute which has published calls for Assange to be assassinated or taken down, it can be revealed.

Sajid Javid, who was Britain’s Home Secretary from April 2018 to July 2019, attended “starlight chats” and “after-dinner cocktails” in a series of off-the-record conferences involving high-level US military and intelligence figures at a 5-star island resort off the coast of Georgia, USA. Many of those attending have been exposed in WikiLeaks publications and have demanded the organisation be shut down.

Javid signed the Trump administration’s extradition request for Assange in June 2019. He was Britain’s Chancellor until his resignation 9 days ago. One of the criteria under which a British Home Secretary can block extradition to the US is if “the person could face the death penalty”.

The month before being appointed Home Secretary in April 2018, Javid visited Georgia for the “world forum” of the American Enterprise Institute (AEI)—an influential neoconservative US organisation with close ties to the US intelligence community. The AEI has run a campaign against WikiLeaks and Assange since 2010.

It can now be revealed that Javid spoke at the 2018 meeting, as did Jonah Goldberg, a fellow at the AEI who has called for Assange to be “garroted”. In a column published on the AEI website, Goldberg wrote: “WikiLeaks is easily among the most significant and well-publicised breaches of American national security since the Rosenbergs gave the Soviets the bomb. So again, I ask: Why wasn’t Assange garroted in his hotel room years ago? It’s a serious question.”

Bill Kristol, a close associate of the AEI who also spoke in Georgia with Javid, has written a column titled “Whack WikiLeaks” in which he asked: “Why can’t we use our various assets to harass, snatch or neutralize Julian Assange and his collaborators, wherever they are? Why can’t we disrupt and destroy WikiLeaks in both cyberspace and physical space, to the extent possible?” Kristol’s article was promoted on social media by another AEI fellow who spoke in Georgia with Javid.

Both Goldberg and Kristol spoke at all four of the AEI’s world fora that Javid attended from 2014 to 2018.

On the panel with Javid in 2018 was Elliott Abrams, a key neo-conservative architect of the Iraq war of 2003 best-known for his conviction during the Iran-Contra scandal in the Reagan administration. Abrams has lamented WikiLeaks’ document releases. Also on Javid’s panel was Fred Kagan, a senior AEI staffer who served as an advisor to the US military in Afghanistan.

Here at @AEI World Forum. If everything weren’t strictly off the record, there would be some interesting things to report.

Javid’s signing of the US extradition request was a controversial decision opposed at the time by the Shadow Home Secretary, Diane Abbott. “Julian Assange is not being pursued to protect US national security, he is being pursued because he has exposed wrongdoing by US administrations and their military forces,” Abbott told the British parliament in April 2019 after Assange had been grabbed from the Ecuadorian embassy in London.

The Trump administration’s extradition request is unprecedented in that the UK has never extradited a journalist and publisher to a third country for prosecution.

The deliberations within the UK Home Office about Assange’s extradition and incarceration in Belmarsh maximum-security prison, where he is currently held, are opaque. Declassified sent a Freedom of Information request to the Home Office asking for any telephone call or email mentioning Assange sent to or from Sajid Javid while he was running the department. The Home Office replied: “We have carried out a thorough search and we have established that the Home Office does not hold the information that you have requested.”

It is unclear if Javid only discussed the Assange extradition request in person while Home Secretary or if he used a private email or phone to do so.

The attendees, agenda and even the dates of the AEI world forum are a tightly-guarded secret. But Declassified is now publishing the attendance lists and agendas—marked “confidential”—of the last four conferences Javid attended: in 2014, 2015, 2016, and 2018 (see end of article). Declassified could not obtain information on Javid’s first two AEI meetings in 2011 and 2013.

Since attending his first “world forum” at the AEI in 2011, within a year of becoming an MP, Javid subsequently visited six out of eight AEI annual conferences up to 2018. From June 2012 until today, Javid’s parliamentary register of interests records that he has made no overseas trips paid by a third-party except those funded by the AEI. In total, Javid has received £31,285.19 ($40,800) in gifts from the AEI.

Javid is the most frequent British guest of the US organisation, and in most years has been one of only a few British invitees. The only other British regular is Michael Gove, another senior figure in Boris Johnson’s cabinet.

The AEI has access to the highest levels of the US intelligence community. Guests at the events Javid attended included two former directors of the Central Intelligence Agency (CIA) and two sitting directors of the National Security Agency (NSA). In 2018, President Trump’s then-national security adviser H.R. McMaster spoke alongside Javid. Any discussions between the British minister and the intelligence chiefs have remained secret.

The CIA made clear that it is “working to take down” WikiLeaks after the latter published the largest-ever leak of classified CIA material in 2017. It was recently revealed that the CIA was provided with audio and video of Julian Assange’s private meetings, including privileged conversations with lawyers, in the Ecuadorian embassy by a Spanish security company. The NSA has also been extensively exposed by WikiLeaks.

The AEI’s 2016 event saw Javid speaking on a panel titled, “The Challenge Abroad and Implications for the United States”, alongside US senator Lindsay Graham who called for Assange to be indicted in 2010 solely for receiving leaks.

Another panel, “Wargaming the Next Attack on the United States”, featured former CIA director Michael Hayden alongside Marc Thiessen and Gary Schmitt, two AEI’s staffers who have written extensively on shutting down Assange and WikiLeaks. Also speaking in 2016 was senator Mitch McConnell, who has called Assange a “high-tech terrorist”, and congressman Mike Rogers, who called for WikiLeaks source Chelsea Manning to be executed.

Javid spoke at the 2015 event with Paul Wolfowitz—an AEI scholar who has been extensively exposed in WikiLeaks releases—about the threat posed by the Islamic State terrorist group. Karl Rove, a former senior adviser to President George W. Bush, also spoke at the 2015 event. It was reported in 2010 that Rove was advising Swedish prime minister Fredrik Reinfeldt on how Sweden could help the Obama administration prosecute WikiLeaks.

“Much talk about the insecurity of the cybersphere has focused on well-publicised breaches,” the panel briefing outlined, “but the reality of the cyberthreat is much broader and more devastating than most assume.” The question posed was: “Is our only choice to bar the doors, or has the time come to take it to the enemy? And what will that mean?”

David Petraeus, another former CIA director, spoke at the AEI’s 2014 event alongside former US vice president Dick Cheney, a member of the AEI’s board, and John Bolton, often seen as the most belligerent pro-war figure in Washington, who was a senior fellow at the AEI before becoming Trump’s national security advisor. While at the AEI, Bolton wrote ambiguously: “As for WikiLeaks itself, and anyone cooperating with its malicious enterprise, now is the time to test our cyber-warfare capabilities. Fire away.”

Assange and the AEI

The AEI has been running a campaign against WikiLeaks—and Assange specifically— throughout the US media since 2010. The organisation’s website lists 20 articles or events tagged with “Julian Assange” and 43 articles tagged with “WikiLeaks”, all of which are negative.

AEI resident fellow Marc A. Thiessen has written numerous articles demonising Assange and the work of WikiLeaks. One article titled,  “WikiLeaks must be stopped”, which is published on the AEI website, concludes, “If left unmolested, Assange will become even bolder and inspire others to imitate his example.” Another article in May 2019, also on the AEI website, is titled, “Assange is a spy, not a journalist. He deserves prison.” Thiessen attended all the same annual AEI fora as Javid from 2014-18.

In 2012, the AEI sponsored an event in Washington DC called “Assange’s asylum in Correa’s Ecuador: Last refuge for scoundrels?” hosted by the AEI’s visiting fellow Roger F. Noriega, another figure critical of Assange. The question to be answered was listed as, “Can Ecuador’s president successfully whitewash his image by advancing Assange’s anti-American crusade?”

Sajid Javid and the American Enterprise Institute did not respond to requests for comment. DM

Matt Kennard is head of investigations and Mark Curtis editor, of Declassified UK, a media organisation investigating UK foreign, military and intelligence policies. They tweet at @DCKennard and @markcurtis30. Follow Declassified on twitter at @DeclassifiedUK

The agenda and attendee list for the AEI World Forum 2014

The agenda and attendee list for the AEI World Forum 2015

The agenda and attendee list for the AEI World Forum 2016

The agenda and attendee list for the AEI World Forum 2018