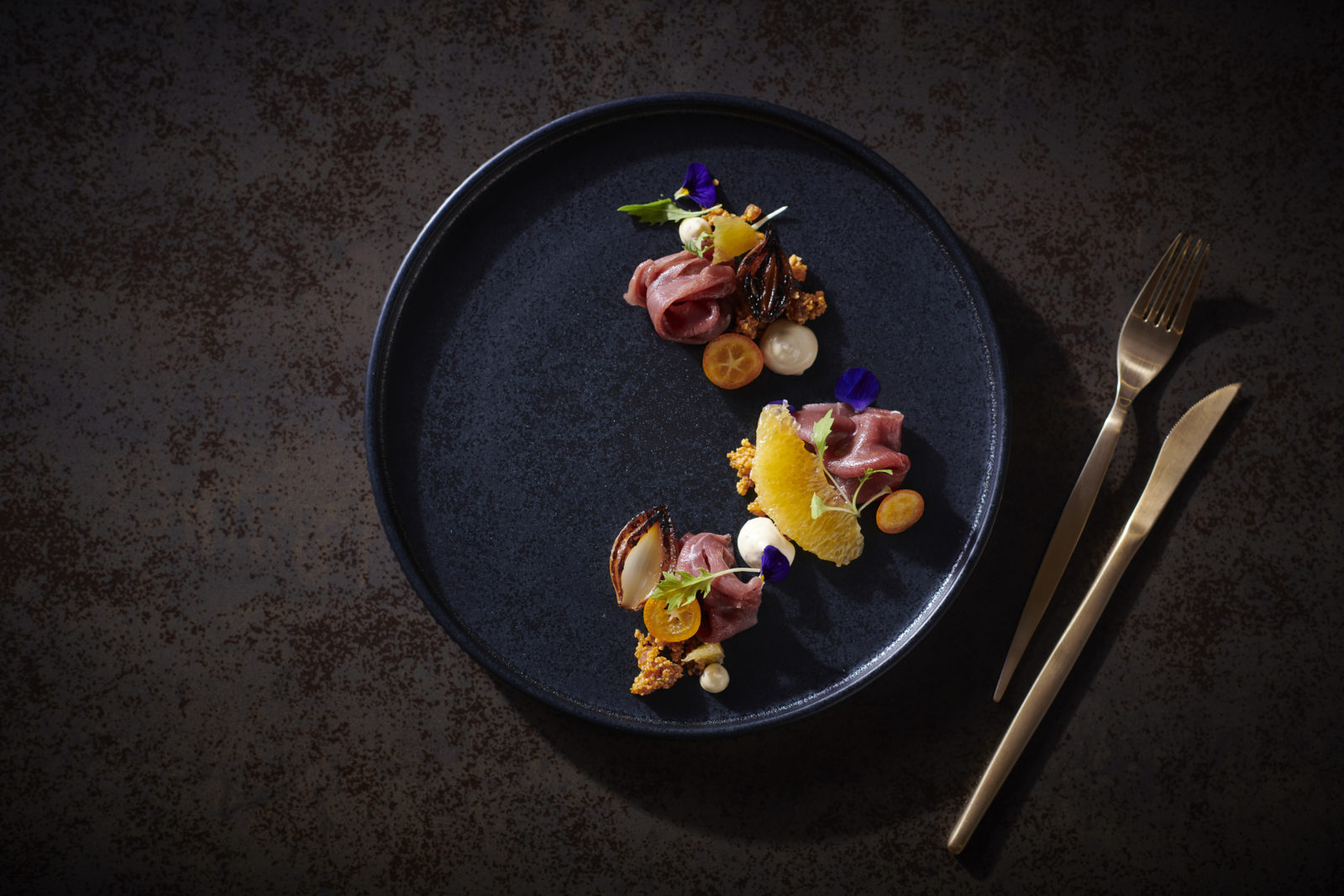 For many months, Sandton’s skyline has been slowly changing while locals watched from their cars on their way to and from work or pleasure. In mid-2019 The Leonardo finally reached its full height to be crowned tallest on the continent. TGIFood found out what’s happening on the seventh floor of The Leonardo.

With a wine “library”, a bar, a private dining room, a lounge and a deli, Aurum, the new restaurant at The Leonardo, the recently completed tallest building in Africa, is clearly aiming high in the South African culinary firmament. Despite having the annoying encumbrance of all restaurants that aren’t in Cape Town – not being in Cape Town – will Aurum (it means “gold” in Latin) reach those lofty heights?

Aurum is on the seventh floor of The Leonardo where its massive presence has been likened to a grand European train station. With a name like Aurum one might expect every dish to be scattered with truffle shavings and gold leaf. You will find truffle (imported) on the menu, but, in fact, the chefs at Aurum have mastered the practice of restraint. Yes, some dishes have an opulent touch, but the culinary ethos embodied in every plate is about the purity of ingredients used.

Owner Paulo Santo explains, “As young chefs, we often want to put more on the plate, we always want to complicate it. We often camouflage the star of the dish. That’s the real secret: presenting the ingredients as honestly and purely as possible. Honouring the artisan, and honouring the farmer. Applying a bit of our skill and technique, and a bit of love.”

Santo reflects on his extensive experience in the restaurant industry: “Having worked in high-end establishments over my 16-year career, I’ve learnt what not to do.” He spent two and a half years at Cube Tasting Kitchen in Parktown, before moving to private consulting.

At Cube, Santo met Aurum’s head chef Darren O’Donovan, and sous chef and sommelier Lisa De Beer. After studying hospitality, and later at the HTA School of Culinary Arts, O’Donovan worked at the Ritz Carlton Naples for a year before returning to South Africa. Refining his craft under Dario De Angeli, O’Donovan worked his way up to head chef at Cube Tasting Kitchen.

At Cube, O’Donovan developed his culinary style: modern technique, simple ingredients, and a strong local influence. He also met his now long-term girlfriend Lisa De Beer when she worked as a sous chef at Cube.

De Beer was three years into a law degree before she realised her calling as a chef. She studied at Capsicum Culinary School before working at Social Kitchen & Bar, and later Cube, which became the catalyst for her journey as a sommelier. O’Donovan and De Beer left Cube to travel. They visited 35 countries, including Italy, Russia, Hungary, and Finland.

“One of our most profound and influential memories was spending time in the Arctic Circle. We were lucky enough to spend time with a local woman who took us lake fishing and imparted her wisdom about how life works in relation to food in such a harsh environment. Limited numbers of fish are caught, red meat is in short supply and only a small portion of culled reindeer are used for meat each year. It was the ultimate cycle of sustainability and respect for food and this ethos has had a huge impact on our food identity,” says De Beer.

Aurum’s menu is defined by modern simplicity. Creamy fresh burrata is served with a simple tomato salsa and grapefruit. Homemade bread is served with herbed butter churned in-house. Homemade leek ravioli is served simply with a Parmesan cream. Each dish is a curated experience to showcase the star ingredient.

O’Donovan and his team used the extra time before launch to source the finest local ingredients, and visit their supplier’s farms. Meat is organic and free range, and fish is sustainably caught at sea.

Even their wagyu beef is supplied by local Eastern Cape producer Purdon Wagyu.

“We’ve just struck a partnership with arguably the finest wagyu producer in the country. The lush green hills of the Eastern Cape are wagyu territory,” says Santo.

Aurum’s wagyu ribeye is served with rosemary butter and a side of exotic mushroom risotto. “It’s simplicity on a plate, but a celebration of product, which is what we’re all about,” says Santo.

Aurum has its own little chef’s garden behind the kitchen, and all wet waste is turned into compost for the garden. The team harvests fresh ingredients like spekboom for gastronomic experimentation. The sour citrus notes of spekboom lend themselves to herbaceous sorbets and gin cocktails, and rose geranium picked from the chef’s garden is used for an exotic ice cream.

Aurum’s interior design is a juxtaposition of raw material and modern luxury. Large stone pillars stand between rust and sapphire-hued velvet chairs, and an ethereal golden installation floats above the dining area.

Santo worked closely with Vanessa Preston from Varoom Interiors to achieve Aurum’s balance between trendy statement pieces and classic features. “Whether it’s a piece of cutlery or a glass, it resonates with Varoom’s style,” says Santo.

Above the restaurant sits an extensive wine library and private dining areas. The two spaces are linked by a dramatic spiral staircase of dark wooden textures and glass.

The distinctive space is called a “library” because, unlike a cellar which lies below ground, this wine inventory is on display above the restaurant.

Huge display cabinets are filled with a diverse selection of local and international wines. “It’s meant to be a space that includes and excites people,” says sommelier Lisa de Beer.

The restaurant’s modern design mirrors the pared down simplicity and the rigour of Aurum’s dishes, and the attention to detail in the curated choices of wine, ingredients, and flavours. DM