Time to rethink the prevention of violent extremism in Africa 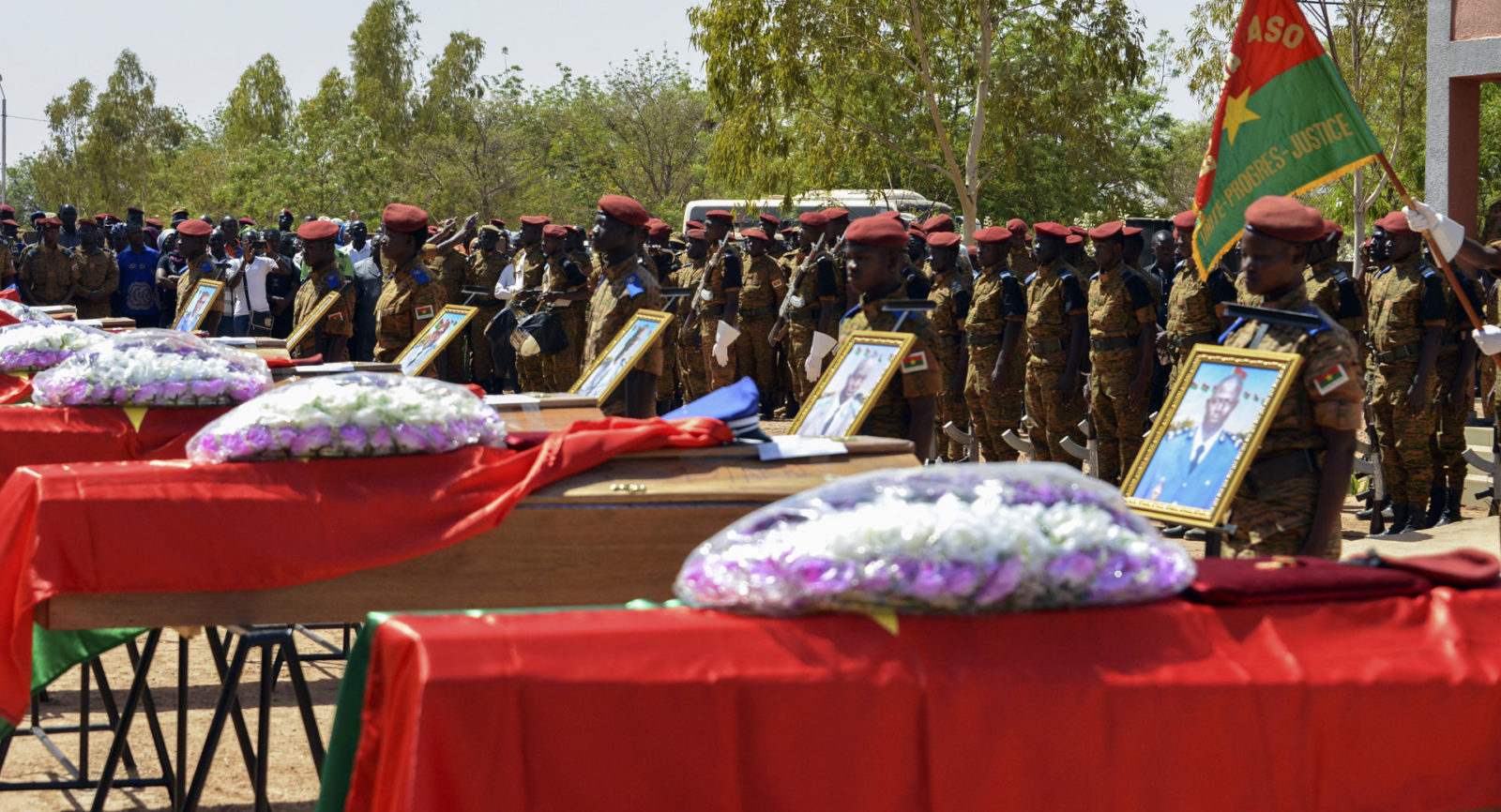 Burkina Faso military personnel gather behind the coffins of military victims of the suspected terrorist attack during a funeral in the capital Ouagadougou, Burkina Faso, 07 March 2018. According to reports Burkinabe authorities arrested eight people allegedly involved in the attacks on the French embassy and military HQ in Ouagadougou in which at least 28 people were killed. EPA-EFE/STR

The complex nature of conflicts in Africa needs to be considered in the design of better projects.

The past year has seen an uptick in terrorism and efforts to counter it in Africa. On the last day of 2019, al-Shabaab claimed responsibility for an attack in Mogadishu, Somalia, that killed over 80 people. More recently, a violent extremist attack in Burkina Faso’s Sanmatenga province left 36 civilians dead. Southern Africa has also seen a rise in terrorism with more than 350 incidents carried out by extremist groups in Mozambique since 2017.

So what have interventions to prevent and counter violent extremism achieved in the past decade, and how can they be improved for the next 10 years?

Research by the Institute for Security Studies (ISS) shows that West and Central African countries have received a total of US$144 228 644 and East African countries US$172 385 324 from local and international donor organisations to prevent violent extremism in the past five years.

The most popular theory of change among those working to prevent violent extremism in these three regions is that raising awareness among communities about the problem and what makes people vulnerable to recruitment, will reduce the chance that they are exploited by groups such as Boko Haram and al-Shabaab.

But there are other factors behind people joining voluntarily, like hard-handed treatment by security forces, poverty, lack of access to formal employment and ideology. Other complexities include: the effects of climate change, which are pushing people into poverty; conflicts in the Sahel, Central and Southern Africa; and continuing human rights abuses. Projects to prevent violent extremism need to take these complexities into account.

Peter Bauman, founder and Chief Executive Officer of Bauman Global, a company that evaluates prevention of violent extremism projects, told ISS Today that in the next decade the focus should be more strategic, holistic and honest. “I hope that greater focus is placed on state actors who promote and support violent extremist groups. I would also like to see more research, analysis, and transparency on who benefits from violent extremism, both financially and politically.”

In a recent Just Security article, Eric Rosand lists the challenges faced by anti-extremism initiatives in Central Asia, alongside the progress made. African practitioners should learn from these challenges, especially when it comes to the disconnect between research on violent extremism and the focus of government interventions, and the role of religion as a driver.

While vocational training, counter-narratives and psychosocial support are all important in addressing terrorism, experts believe governments should still be central to preventing violent extremism. State-led programmes should include security sector reform, transitional justice and the promotion of human rights.

In late 2019, at the International Peace Institute’s policy forum on finding effective ways to prevent violent extremism, speakers discussed the fact that seven out of 10 people in Africa joined an extremist group after experiencing verbal or physical abuse by state security forces.

Eric Pelser, Head of Transnational Threats and International Crime at the ISS says: “Governments do need to take prevention more seriously, and a good starting point would be to make sure their own counter-terrorism actions aren’t making the problem worse.” ISS research shows that tough and discriminatory treatment by security forces remains one of the biggest drivers of conflict on the continent.

Pelser agrees with Bauman that transparency is important, and says more honesty is needed from donors, recipients of funding and the non-governmental organisations that provide support. ‘We need to guard against terrorism prevention becoming an industry dependent on donor funds. We know what works and what doesn’t. New threats and trends must be monitored, but rather than endless cycles of workshops, we need to see action being taken. If it isn’t, we need to know why not.’

Comfort Attah, founder of the Attah Sisters Helping Hand Foundation working to prevent violent extremism in Nigeria’s Bauchi State, believes many people are radicalised through religion. She told ISS Today that counter-narratives to religious ideology should be used to convince people not to join extremist groups. According to Attah, greater emphasis is needed on communication campaigns and skills training for youth.

Donor organisation the Global Community Engagement and Resilience Fund told ISS Today that its interventions in Africa will continue focusing on transnational drivers and the consequences of violent extremism including displacement, food insecurity and trauma which need more humanitarian-focused initiatives.

One aspect that should undoubtedly take centre stage in the coming decade is the need to properly monitor and evaluate every phase of these terror-prevention efforts. This will ensure that issues like climate change, lack of infrastructure and human rights abuses are factored in during a project’s implementation. Evaluation will ensure that practitioners worldwide can learn lessons from Africa on what works and what doesn’t to prevent violent extremism.

In both Asia and Africa, anti-terrorism programmes are showing ‘limited evidence of effectiveness,’ which could be attributed to a lack of good outcome indicators as well as poor transparency around these prevention efforts. At the design stage, programmes must be informed by sound research on the drivers of violent extremism and the conflict dynamics in that country and area. This should translate into well-grounded theories of change that won’t waver under pressure.

Practitioners have gathered enough evidence over the past decade to tell whether projects to prevent violent extremism in Africa are making a difference. Regular evaluations will increase our knowledge in this field, and transparency and honesty should be encouraged by donor organisations and practitioners. DM

Police probe use of water cannon against social grant applicants