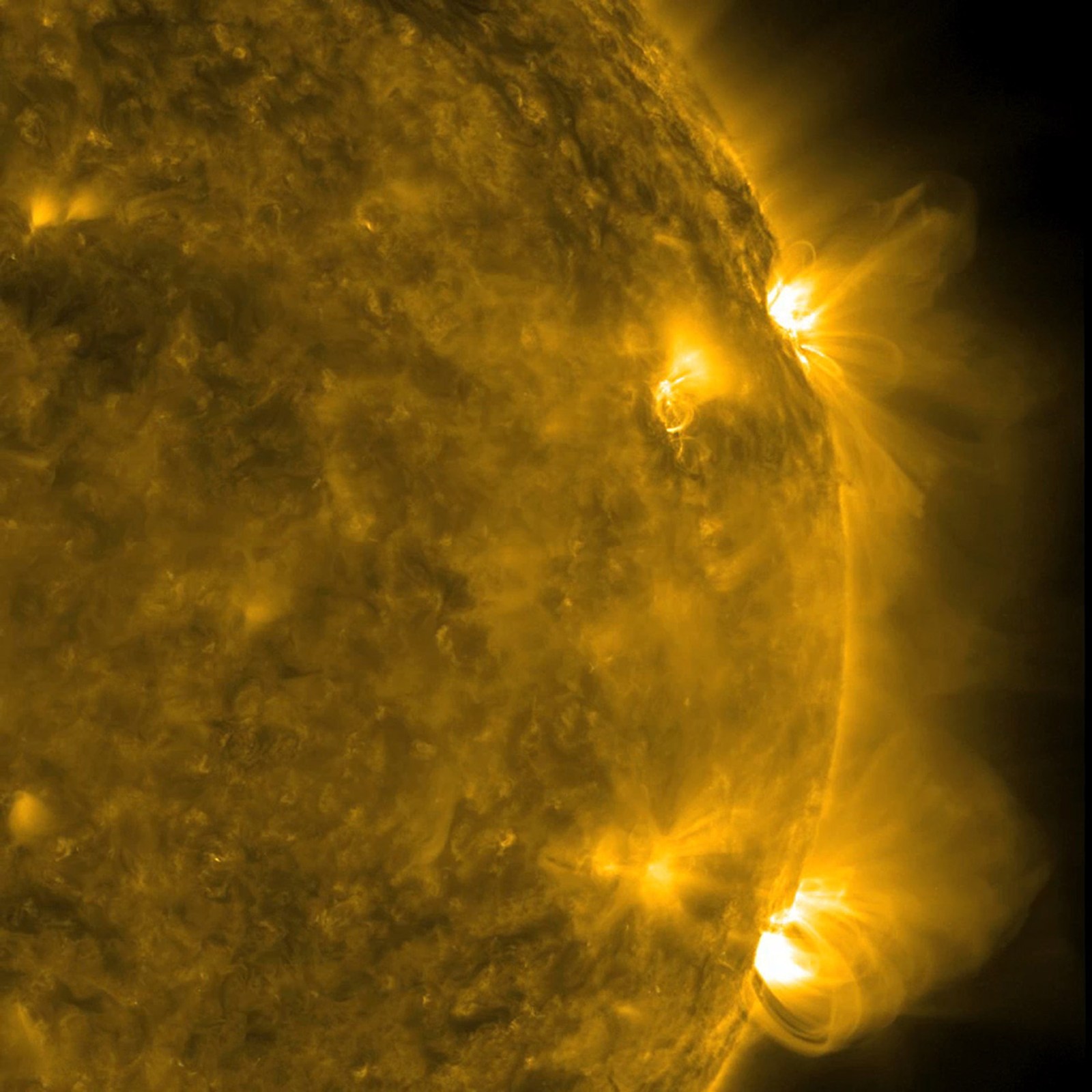 IN SPACE - FEBRUARY: In this handout image provided by NASA / SDO, a pair of active regions on the Sun were captured in extreme ultraviolet light from the Solar Dynamic Observatory (SDO) spacecraft over a three-day period between February 7 to 10, 2011. The magnetic field lines above the regions produced fluttering arcs waving above them as well as a couple of flares. Another pair of smaller active regions emerges and trails behind the larger ones. (Photo by NASA/Solar Dynamics Observatory via Getty Images)

Both space weather and terrestrial weather begin with the sun. The star at the centre of our solar system is always active in the background.

The US’s NASA and the Space Science Directorate of the South African National Space Agency (SANSA) in Hermanus are among the agencies in charge of observing, monitoring and recording the sun’s activity, from sunspots to a multitude of space weather events. The main ones originate on the surface of the Sun, like solar flares, solar wind, coronal mass ejections, solar prominences and high-speed streams.

These events are detected by solar telescopes based both on Earth and in space, which observe using various filters.

Dr Pierre Cilliers, a researcher at the space science directorate of SANSA, responsible for the development of space weather products for the air traffic navigation community, explains: “We have significantly fewer instruments and data to build space weather models, and in many respects a significantly more complex system than the terrestrial weather system. Space weather prediction is still far behind and can only be done with reasonable accuracy for an hour ahead, once we have input the solar wind data from a satellite which confirms that the flare seen on the sun a few days before is actually geo-effective… But no one can yet predict how the sun will behave and what the space weather will actually be,” says Cilliers.

Yet, though limited, these predictions are critical to checking possible interferences in our technologies.

In 2011, former US President Barack Obama and former British Prime Minister David Cameron announced that the US and the UK would work together to create “a fully operational global space weather warning system”; in 2019, the European Space Agency (ESA), NASA, the US National Oceanic and Atmospheric Administration and the UK’s Space Agency started collaborating on a “new space weather system” – to monitor solar activity and protect astronauts and technologies from possible disruptions.

And disruptions there have been and there may be; one of the first solar storms was recorded back in 1859 when English astronomer Richard Carrington observed a solar flare. Dr Phil Chamberlin, NASA research heliophysicist and SDO deputy project scientist explains: “… (Carrington observed) a huge release of energy that converts the magnetic energy of the sun into heat and light” – then collected reports corroborating his observations and which showed the impacts of the flare on Earth: auroras seen around the world, telegraph operators getting “electric shocks” and sparking masts following the release of magnetic energy.

On 13 March 1989, a solar storm tripped circuits across the entire province of Quebec in Canada. A few days before, on Friday 10 March 1989, “astronomers witnessed a powerful explosion on the sun. Within minutes, tangled magnetic forces on the sun had released a billion-ton cloud of gas. It was like the energy of thousands of nuclear bombs exploding at the same time. The storm cloud rushed out from the sun, straight towards Earth, at a million miles an hour. The solar flare that accompanied the outburst immediately caused short-wave radio interference, including the jamming of radio signals from Radio Free Europe into Russia. It was thought that the signals had been jammed by the Kremlin, but it was only the sun acting up!” says NASA astronomer Dr Sten Odenwald.

Two days later, a cloud of solar plasma struck Earth’s magnetic field. Odenwald adds: “The violence of this ‘geomagnetic storm’ caused spectacular ‘northern lights’ that could be seen as far south as Florida and Cuba. The magnetic disturbance was incredibly intense. It actually created electrical currents in the ground beneath much of North America. Just after 2.44 am on 13 March the currents found a weakness in the electrical power grid of Quebec. In less than two minutes, the entire Quebec power grid lost power. During the 12-hour blackout that followed, millions of people suddenly found themselves in dark office buildings and underground pedestrian tunnels, and in stalled elevators. Most people woke up to cold homes for breakfast. The blackout also closed schools and businesses, kept the Montreal Metro shut during the morning rush hour, and closed Dorval Airport.”

Fast forward to 2020, and such a scenario might lead to much more disturbing consequences. The tight relationship between terrestrial weather and space weather means the threat to technologies like power grids, pipelines, communication systems, navigation systems, airlines and mobile phones is far greater than in the past.

“Some space weather events only have an impact on the day side, while others may occur at dawn and dusk or even at night time due to ions moving across the poles from the day side to the high latitudes on the night side,” says Cilliers.

“The impact on the ionosphere depends on the intensity of the storm and on the latitude. Geomagnetic storms are generally much more intense in the high latitudes than in the mid and low latitudes. On the other hand, fluctuations in the ionospheric density which affect radio wave propagation are much more prevalent at the low latitudes, due to the configuration of Earth’s magnetic field,” he adds.

“When a flare is observed on the sun, we have an advanced warning of a space weather storm that might come our way and reach us within a few days.

“If the solar wind is earth-directed (geo-effective), the interaction of the solar with Earth’s ionosphere and magnetic field give rise to geomagnetic and ionospheric storms. The sun emits about a million tons of matter each second, in the form of high-energy charged particles, mostly protons. During space weather storms, this can increase to 100 million tons of matter hurled out into interplanetary space. The duration of space weather storms that are driven by coronal mass ejections typically last a few hours, while the storms that result from geo-effective high-speed solar wind streams can last for several days up to a week,” he says.

Space weather affects almost all radio communication systems. This means that a space storm could affect GPS, disrupt email, DStv signal, any type of communication (including defence and military), satellites and disrupt ground-based technological systems and services in a way that endangers property or human health.

“If I make use of a satellite navigation system such as GPS, the increased errors of the estimated position may make it difficult to find a particular location, especially if I am dependent on a helicopter to come to my aid in a search and rescue operation during bad weather or poor visibility when they need to navigate by GPS. My DStv may have excessive blurring or snow (more likely if I am still using an analogue decoder), due to the disturbances on the signals coming from the DStv satellites; my airline flight may have to be delayed or rerouted due to space weather impacts on the HF [high frequency] communication systems used by pilots to stay in touch during the full duration of the flight with the nearest air traffic control centre,” says Cilliers.

Locally, the Space Science Directorate of SANSA and its predecessor, the Hermanus Magnetic Observatory, have been monitoring solar flare intensity for decades, according to Cilliers, since they are known to cause geomagnetic fluctuations on Earth as well as ionospheric disturbances.

“The strongest solar flare since regular X-ray data of flares became available in 1976, was observed on Monday 2 April 2001.

“It was first recorded by NASA’s Solar and Heliospheric Observatory (SOHO) satellite. The flare was significantly more powerful than the famous solar flare of 6 March 1989, from the sunspot region which caused the geomagnetic storm that disrupted power grids in Canada. Fortunately, the flare occurred on the solar limb and was not aimed directly towards Earth.

“However, it produced a R4 level radio blackout (radio blackouts are classified using a five-level NOAA Space Weather Scale), on the sunlit side of Earth. The R4 level is just short of the most severe R5 rating level. What this meant was that for several hours after the flare, there was a total blackout of HF radio communications on Earth, which led to a disruption of air traffic, which makes use of HF radio for long-distance communication with control towers.”

Although we cannot yet predict far ahead how space weather will affect us on Earth, the technological mayhem it may cause is real. How real? Only one way to find out. ML