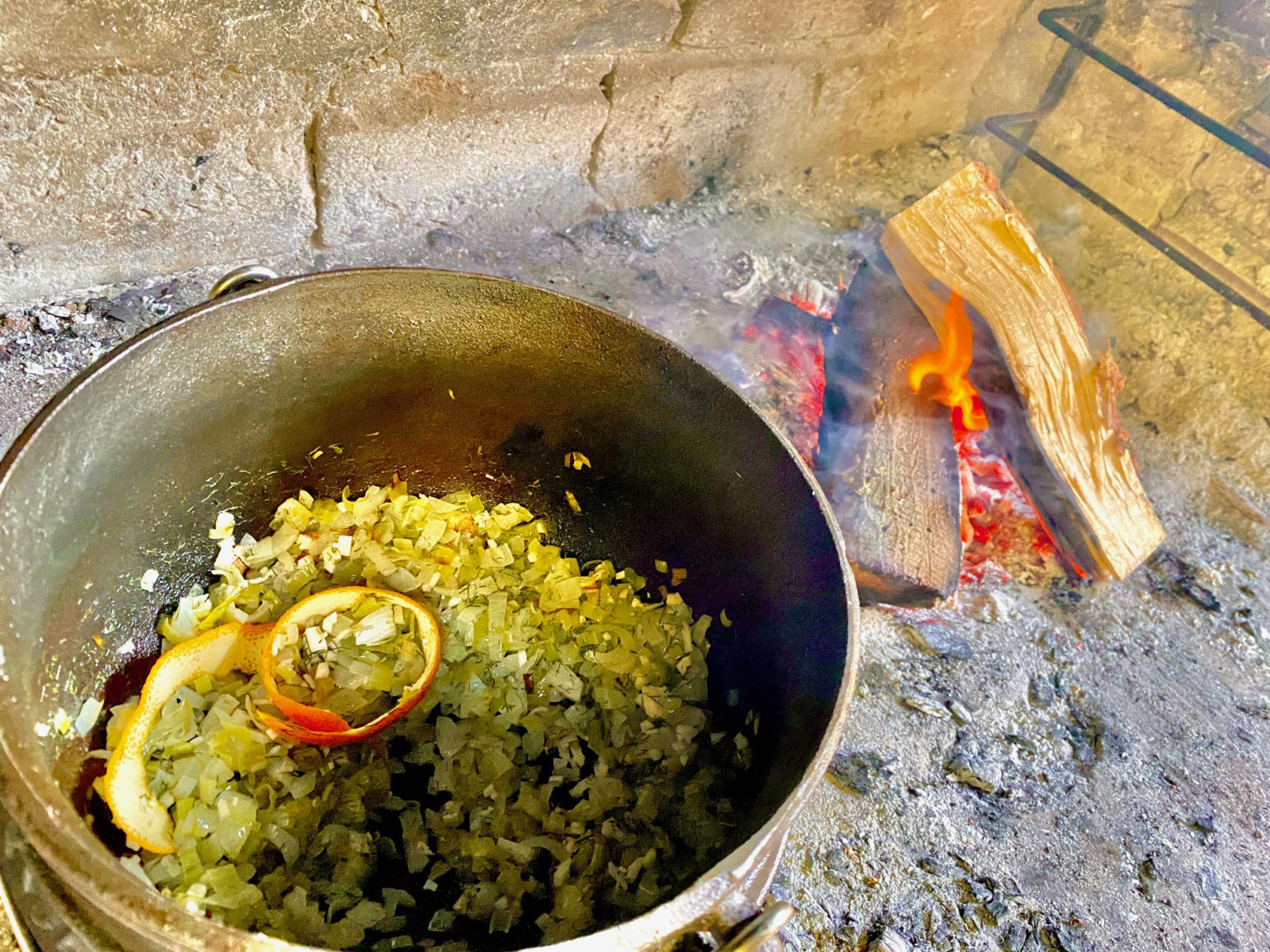 Onions and garlic simmering with fennel and orange peel for the making of a prawn and calamari potjie. (Photo: Tony Jackman)

It was The Honourable Lord Stephen Wrottesley who introduced me to the art of making a potjie, when it was a new fad in the mid-Eighties. And, a decade earlier, a farmer in north-western Namibia who’d shot a springbok that day. Now that I own one again, I find myself experimenting. With good results.

I got a potjie for Christmas. It’s not my first potjie. I’ve had four or five. They sometimes end up as plant pots. One had a cactus in it. Another was forgotten in the cupboard under the sink after I’d neglected to oil it after what turned out to be its final use, and there’d been a leak, and there followed erosion, and unfathomable chemical reactions took place, and my nose finally led me to discover its putrid death months later. It would have been unkind to any plant to have to live in that.

It was The Honourable Lord Stephen Wrottesley, aka congenial colleague to many a Cape Town journo, aka Wrots, aka Wrotters, the eccentric and sadly missed (he died too young, at 47) former crime reporter, news editor and one-of-a-kind jolly good fellow, who introduced me to the art of making a potjie. Who knew Wrotters could even cook? We were all, as one – and it’s not as if there were no drinkers among the rest of us – in awe of his prowess in a pub, which matched his flair for his reporting job.

Wrotters and I were both young parents of baby girls at the time, circa 1986, and he invited us to his and Roz’s then Kenilworth, Cape Town house for a Sunday potjie lunch. He wanted to tell me all about this new potjie thing, which wasn’t new at all unless you were a soutie. For our boere brethren it had been around since at least the Great Trek and of course it is key to other world food cultures. But suddenly, mid-Eighties, it became the new thing that everyone wanted to do.

The trick, Wrots explained, was to layer the thing. Onions and meat at the bottom, then layers of potato, carrots, beans, whatever vegetables you chose. Then season and pour in a bottle of red wine. Put the lid on. And leave it for three hours. We learnt to keep a fire going nearby, to have a garden trowel on hand to use for shovelling a few more coals beneath the pot, to invest in a “potjie stand”, a similarly three-legged thing which enabled you to raise the pot a little higher above the embers. Which, I always thought, seemed to point to a design fault: shouldn’t the pot’s three little legs be not quite so little? Anyway. What does a verdomde Ingelsman know.

In fact, though, I had been introduced, unwittingly, to the potjie a decade earlier, though this only occurred to me recently. I prefer to bury most of my memories of my army days, because they were always a thing I’d rather had not happened. But you can’t escape the facts of your life, no matter how uncomfortable they might make you.

So I can state, awkwardly, that my introduction to potjiekos – food cooked in a three-legged cast-iron pot – was during my military service in 1975-6. Awkward, because I was the Reluctant Soldier. I wanted to be anywhere but there. If there’d been money in the family I would have been one of those who scarpered to London, to return in 1994, calling myself an exile. But my mom couldn’t afford the ticket. It was far too early for the End Conscription Campaign; we just either pitched up, or refused, with the dire consequences that entailed. The dreaded day when the “papers” would arrive – your call-up for conscription to what in my case turned out to be the army – had been a Sword of Damocles hanging over my head throughout my adolescence. My Great Dread.

My luck being what it is, 1975-6 was when South Africa decided to send “the boys” into Angola. This is a food column, so I’m going to skip to the point quickly. Suffice to say that for some of us, the experience was excruciating. The moment that best explains my horror at my plight was this: we’ve set up a base camp in the southern Angolan bush. It’s twilight. The guys are bedding down for the night, climbing into sleeping bags; some are on guard duty at the perimeter. Colin, leaning on an elbow in his sleeping bag, has his transistor radio playing softly. I saunter over, and it’s Denis Smith reading the “seven o’clock news”. The comfortingly familiar voice tells us that our presence where we are is a lie. That the Prime Minister, John Vorster, has denied (in response to the US and UN) that there are South African troops in Angola. And yet we’re there, and he sent us there, and some of us did not want to be there, were scared as hell, and I have hated the man ever since.

Some months later, though, we were back in Ovamboland, as it was then, and a section of us, in other words 10, had been assigned to guard a farmer in the far west towards Ruacana. Green, beautiful country, far removed in vegetation from the baobabs and oshanas much further east towards Oshakati and Ondangwa. It was an idyll. We’d follow the farmer in our SADF-issue Unimog while he drove all over his farm in his bakkie. One night, as the sun set, he stopped beneath a giant tree. We were camping there for the night. During the day he’d shot a springbuck. He told us to make a fire and, later, lifted a big potjie off the back of his bakkie and put it on some coals. We carved up pieces of springbok meat and he started braising them. It’s so long ago that I do not remember the other ingredients, but it was sweet, the meat soft and delectable, the most delicious thing I’d eaten in most of a year.

In the years and decades since Wrotters baptised me in the wonders of cooking in a Falkirk cast-iron pot, I’ve spent many hours – collectively, no doubt a number of weeks – hovering at the fire with steam creeping out at the edge of the heavy lid. I’ve kept a fire going to keep the heat below the pot alive for all that time. I’ve carefully placed a few coals on top of the lid to draw the heat through. Later, giving in to temptation, I’ve brushed away the ash from the lid, then lifted it for a second and quickly closed it, to relish the waft of aroma without losing any cooking juices.

Until recently I’ve almost always followed the original advice I’d been given, to layer so many vegetables in it, with the meat below. But it’s never too late to change. Recently I’d been thinking about how I’d always found whatever was cooked in a potjie a bit samey. And how you’re inevitably left with a mushy, unkempt plate of nothing overly identifiable, if undoubtedly delicious. So I decided, with my new Christmas gift – and it must be many years since last I owned a potjie – to change gear. I’d cook only the meat in the pot, with its aromatics and cooking stock. And anything else I’d cook separately. Just as you would if braaing the meat instead of simmering it for hours in a Scottish pot.

I bought four lamb shanks (from the rear, they were enormous) to make a lamb shanks potjie and gathered the other ingredients: 2 large onions, some sprigs of thyme, three obese cloves of garlic, 2 star anise, salt and pepper, and a bottle of port. Or Cape Ruby as we are told by Europe to call it. Or by Portugal. Or by the former colonial oppressors. Honestly, we should tell them to f*** right off and call it what we bloody want to. Anyway, I for one will continue to call it port. So there. What are they gonna do, send a posse? A drone? The Name Police?

But. Let me tell you: it worked. Never before has a potjie I’ve made tasted anywhere near as delicious. The simplicity of concentrating the flavour profile down to one key element – the shanks – made a massive difference. Once there’d been plenty of reduction – and I did want that, both for consistency of the sauce and its flavour intensity – the jus, for want of a less pretentious word (but I’ve already used sauce) was sublime.

To accompany the shanks and their lovely self-making gravy I baked potatoes in the oven with rosemary, olive oil and Oryx desert salt from Namibia. Which I thought seemed apt. No, you can use whatever salt you choose. But they too were wonderful, so do try this: Wash large potatoes and dry them. With a sharp knife, cut half way down, then half way again in the opposite direction, to make a cross. Be careful not to cut too deep. Push a rosemary sprig into each gash.

Drizzle over some extra virgin olive oil. Sprinkle over some coarse salt. Whatever’s in the cupboard will do. Place on a flat iron baking tray. Do not cover in foil – leave them to get the full blast of the oven’s heat, right on their skins. Bake in a mightily hot oven – around 240 – for a good two hours. Don’t lose faith.

Only days later I brought out the potjie again, for something completely different: a calamari and prawn potjie. This involved first making a mirepoix, then a fish stock, then turning that into a wondrous thing with wine, tomato and saffron, and finally heating the broth in a potjie and cooking the prawns and calamari in it.

I spent my time at the potjie side thinking about my uninvited army days, and how – even though I’ve never forgiven Vorster, not merely for my minor gripe about his lies but for his reign of terror at John Vorster Square – time has somehow assimilated the hated experience and shown me ways to own something useful out of it. And to give a nod to good old Wrotters, who must be drinking the Big Bar in the Sky dry. DM