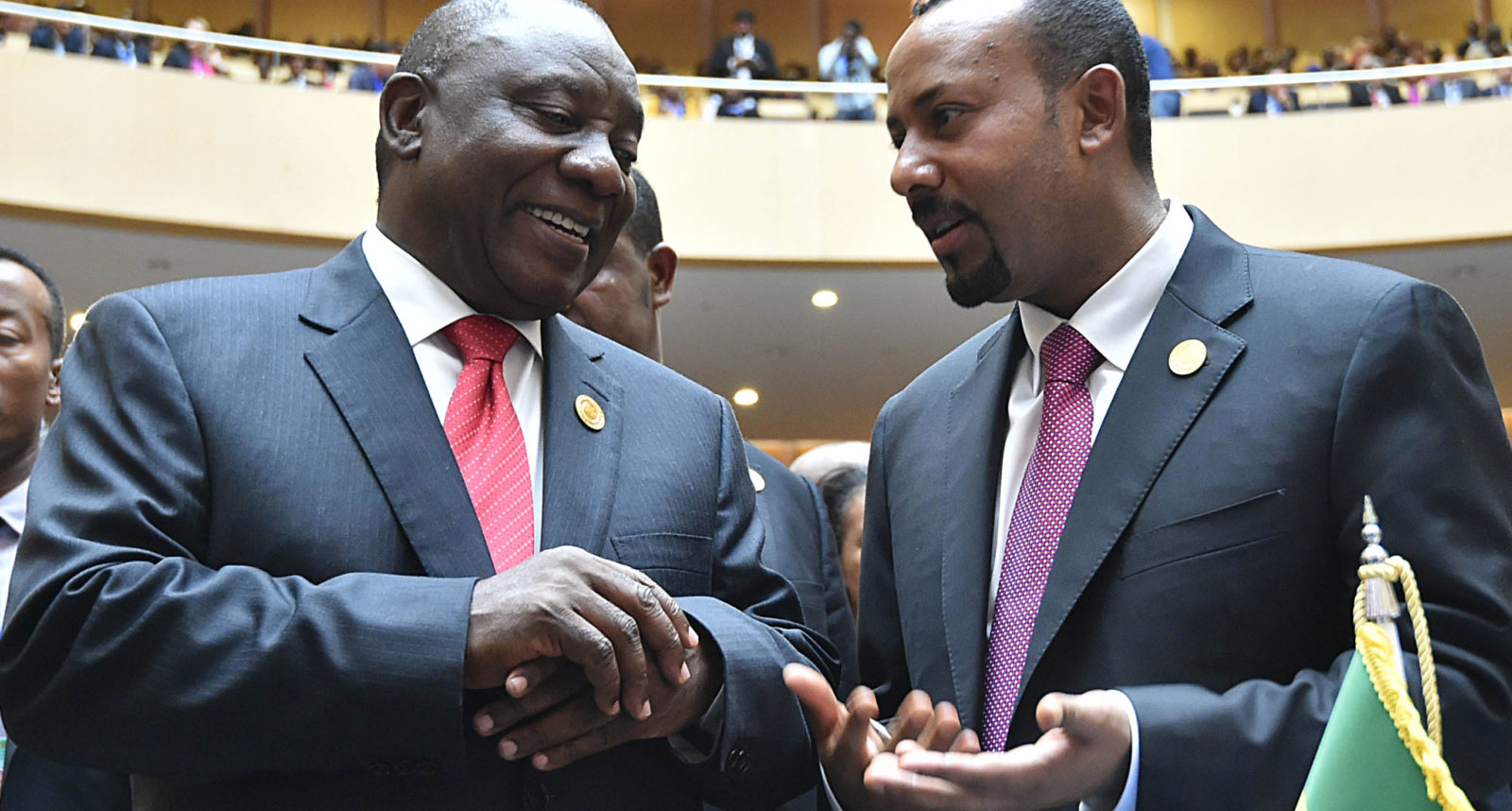 File Photo: President Cyril Ramaphosa with Prime Minister of Ethiopia Abiy Ahmed during the opening session of the 32nd Ordinary Session of the Assembly of Heads of State and Government of the African Union. 10/02/2019 Kopano Tlape GCIS

Apart from the obvious benefits Ethiopian President Abiy Ahmed Ali’s reforms have brought to his own country and the region, they have also created the opportunity to revive rather dormant relations between Ethiopia and South Africa.

That became clear during Abiy’s official visit to South Africa this week when he met President Cyril Ramaphosa, attended the governing African National Congress’s 108th birthday party and addressed the large Ethiopian diaspora at a rally in Johannesburg.

This was the first state-level visit either way between two of Africa’s largest countries. Although they established a Joint Ministerial Commission many years ago, ‘we have not adequately made use of it,’ Ramaphosa said. Now the commission should be used to create momentum for deeper and expanded political and economic relations, raised to the level of a ‘strategic partnership.’

The two leaders made much of former president Nelson Mandela’s military training in Ethiopia in 1962. Abiy conversely received military training in South Africa when he was a military officer. It‘s hard to pinpoint why relations haven’t been so warm since. Partly perhaps because Ethiopia was such an inward-looking country, pre-occupied with its own fraught internal politics and regional tensions, mainly with Eritrea.

South Africa’s second president, Thabo Mbeki, established a good rapport with former Ethiopian prime minister Meles Zenawi, but they collaborated more on continental integration than on bilateral relations. Then came Jacob Zuma, who neglected much of what Meles and Mbeki created, such as the New Partnership for Africa’s Development and the African Peer Review Mechanism.

Now both countries have new leaders, creating opportunities for boosting relations, as a South African official pointed out to ISS Today. Ramaphosa promised full support for Abiy’s ‘innovative, bold and brave reforms’ at home and his ‘vision and courage’ in breaking the long impasse with his neighbour Eritrea. Abiy has also improved the potential for better economic relations with South Africa, as with other countries, by talking about liberalising Ethiopia’s previously rather closed economy.

“And we look to the South African private sector to come and share our prosperity with mutual gains. Ethiopia is opening up to the private sector in telecoms, energy, logistics and other industries and sectors which South African investors have great experience in,” he said.

Abiy’s more outward-looking prime ministership has also opened up new possibilities of collaboration on the continent. “We have identified Ethiopia as an important country we can team up with to advance continental integration. We will work together on the African Continental Free Trade Agreement as well as peace and security issues,” a senior South African official said.

Ramaphosa said that as South Africa takes up the annually rotating chair of the African Union (AU) next month, it hopes to work more closely with Ethiopia on advancing the AU’s Agenda 2063 and its “Silencing the Guns” programme.

One of the first regional projects Abiy and Ramaphosa could embark on is Ethiopia’s own dispute with Egypt and Sudan over the impact on their water supply of Ethiopia’s giant Grand Ethiopian Renaissance Dam (GERD) being built on the Blue Nile. Ramaphosa agreed to use the AU chair to help mediate negotiations, although it’s not clear how that fits with America’s still active mediation role.

There are of course impediments to closer ties between Ethiopia and South Africa. One is that members of the large Ethiopian diaspora have been among the targets of periodic xenophobic violence in South Africa. Ramaphosa reassured Abiy and expatriate Ethiopians that they were welcome and that his government was taking strong measures to protect them.

Clearly though, the closed-door discussions were a little tougher as the joint communiqué said: ‘The two countries agreed on the need for both countries to work together to address illegal migration, human trafficking and smuggling.’

Some South African officials are sceptical about Abiy’s domestic reforms, wondering if he can sustain them. Along with genuine, good faith political opposition, he has also liberated some risky ethno-nationalist forces threatening the country’s stability, Institute for Security Studies (ISS) Senior Researcher Semir Yusuf recently warned in a monograph.

Another upcoming ISS report warns that Abiy has many fundamental socio-economic reforms still to undertake and that ‘Ethiopia is at risk from its fragile institutions and ethnic pressures.’

Pretoria believes the Prosperity Party that Abiy has just established to replace the Ethiopian People’s Revolutionary Democratic Front – the ethno-regional coalition that Meles founded – will win August’s elections. But it’s not certain Abiy will be able to contain the political violence that some expect the elections to provoke.

Comparisons with Nigeria, another African superpower, are inevitable. President Muhammadu Buhari was also in South Africa last year when the problem of xenophobic attacks loomed large. Abuja and Pretoria also tried to use that visit to return relations to the era of Mbeki and former Nigerian president Obasanjo.

Both visits evoked a rather nostalgic sense of a renaissance in relations after the dark ages of the Zuma era. But Ramaphosa and Abiy will have to work hard to sustain such a renaissance, against the major distractions of the turbulent domestic politics that both now confront. DM