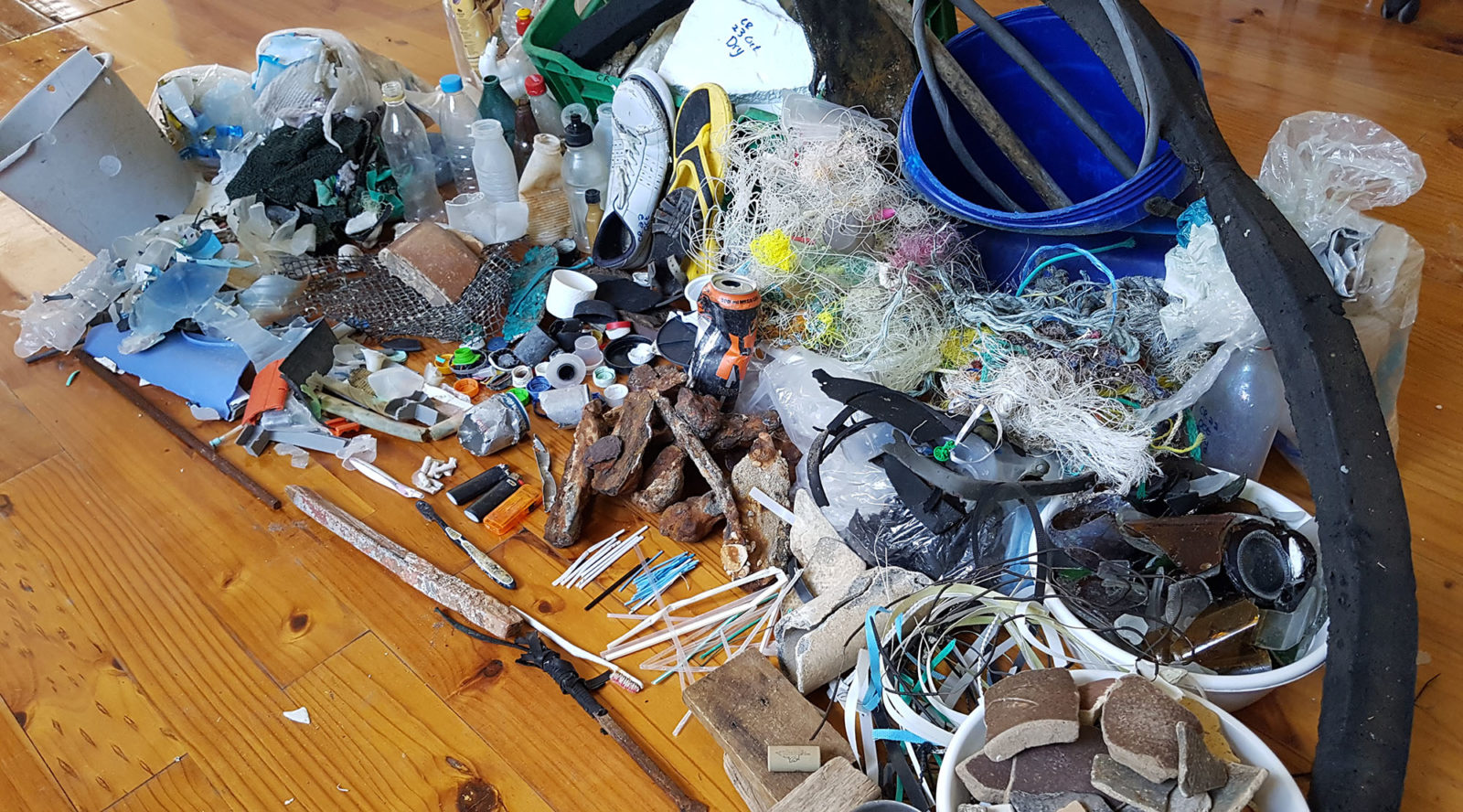 A 50-year-old toothpaste tube, a 15-year-old chocolate wrapper and thousands of pieces of styrofoam and polystyrene were among pieces of rubbish collected in 2019 on Port Elizabeth’s beaches by researchers of the Sustainable Seas Institute, as part of a baseline study to measure how effective new initiatives are to remove plastic from Africa’s oceans.

Plastic of up to 50 years old was found on Port Elizabeth’s beaches as the Sustainable Seas Institute (SST) complete their audit to find the sources of pollution on the Eastern Cape’s beaches.

Ten days after they left the beaches at Cape Recife and Bluewater Bay spotless, researchers at the Sustainable Seas Institute collected close to 80kg of rubbish from the two beaches – and that was before the festive season.

“Doing a waste audit is not as gross as it sounds,” said Toshka Barnardo, who is part of the Litter Monitoring Project at the Sustainable Seas Institute. “When you collect litter on the beach the sea has already washed it clean. It is much worse to collect it from the streets.”

Highlighting the length of time litter takes to decompose in the sea, she said they have for instance found a toothpaste tube on the beach at Cape Recife that was close to 50 years old and a chocolate wrapper for a sweet that was discontinued in 2004. Of course, the exact date at which the material was dumped is unknown.

According to the results of the survey, at Cape Recife waste collectors found 2,535 items, with a combined weight of 71.4 kg, over 10 days. Barnardo said 65% of the litter was plastic and 7% of the total waste of foreign origin.

The bulk of the litter (802 pieces) they found was made of polystyrene and styrofoam. The second-largest number of items found discarded at Cape Recife, a popular fishing spot, was fishing gear, including fishing line, ropes and pieces of metal. Researchers also found 252 pieces of glass, 203 pieces of hard plastic and 133 food wrappers or other packaging.

She said that within the 10 days after leaving the Bluewater Bay beach pristine, they found 4,327 pieces of litter weighing 8.1kg. This included 1,417 pieces of polystyrene and styrofoam containers, and approximately equal amounts of plastic caps and rings, food wrappers and hard plastic pieces. Researchers also collected 273 earbuds from the beach.

Barnardo said: “Whenever we try to date something we first look for a production date which is often stamped on the packaging. For the older items this stamp is usually worn off, so we have to do a bit more research. For the chocolate wrapper, we phoned Cadburys and they told us that the specific chocolate has not been produced in South Africa since 2004 (the wrapper we found was produced in SA). So we know it is at the very least 15 years old.

“For the toothpaste tube we contacted Colgate but they could not help us at all. So we did our own research where we looked for old ads and any information we can find online. Based on this, we think it could be around 50 years old. This is based on an ad we found in the Huisgenoot from 1970 where they advertised that product with the same logo we have (the logo changed over the years). So we don’t have specific ages, but based on our research we have good estimations.

“We have no way of knowing how long the items actually were in the sea. It could also have been trapped in the sand dunes for years before it got exhumed again by the ocean. So we assume that it has been in the general marine environment for that whole time,” Barnardo said.

The Sustainable Seas Trust aims to educate and advocate for environmental awareness to preserve coastal areas.

In 2018 a joint project by the United Nations, the Centre for Industrial and Scientific Research and Technology for Environment forecast that Africa will become the greatest plastic polluter of the seas by 2035.

“This data by the collaboration of the seven countries will help to determine current litter baselines, inform litter reduction measures, and monitor the impact and effectiveness of such measures,” she said.

Dr Greg Hofmeyr, the regional co-ordinator of the Stranding Network, said some species of marine life are badly affected by plastic pollution, most notably turtles, which see plastic as food, and seabirds. He said they do find cases of whales and dolphins entangled in plastic but this is mostly discarded fishing gear.

“It is important to remember that plastic pollution in the ocean is not just the stuff you can see. Most animals are also ingesting microplastics. These microscopic bits of plastic damage the animals from the inside,” he said.

Nicole Collier-Naidoo and Anne Knott from the local chapter of Extinction Rebellion said in a statement commenting on the survey by the SST that their findings revealed the extent to which people, food and fishing industries are disregarding all species and the environment.

“South Africans are continuously and irreverently discarding all kinds of single-use plastics, such as food containers, wrappers and packaging, including polystyrene/styrofoam and earbuds. Few of us seem to make the connection between the plastics we use and discard daily, and the extractive fossil-fuel industry. The various kinds of plastics and polystyrene/styrofoam are by-products of this industry, which fuels the exponentially increasing carbon emissions that have caused the climate and ecological emergency. And we in South Africa are already experiencing this emergency in a number of ways, such as in extreme temperatures, intensifying drought, increasing hurricanes, flash floods, rising sea levels and acidifying and choked-up oceans.

“However, the individual has only so much power to change a food production and distribution system that makes it exceedingly difficult for us to make better choices. Alternatives remain out of reach, unaffordable and largely unavailable at scale.

“Research undertaken in Durban shows that all of the fish the researchers investigated in our waters are polluted with plastic. Further research indicates that we tend to imbibe about a credit card worth of plastic, which is in our food, bottled water and beverages, such as soda water and beer,” they added. MC

Shabir A Madhi
Save 4 mins

Adele Baleta for Spotlight • 24 hours ago

Elri Voigt for Spotlight
Save 10 mins

Vaccine may be ready in early 2021, neighbourhood creates space for self-isolation, and oxygen supply shortage looms in Gauteng