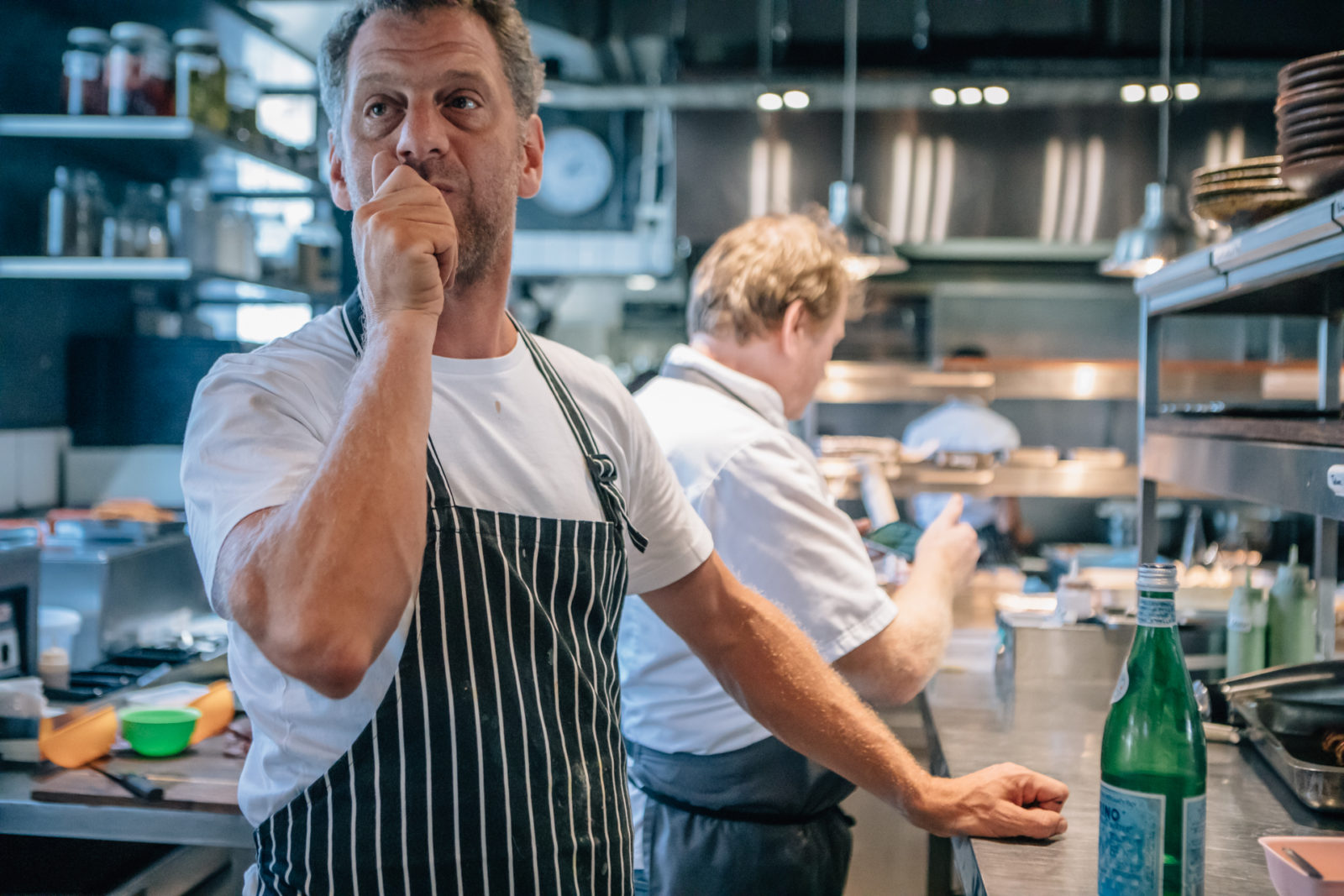 The Test Kitchen’s Luke Dale Roberts invited his mentors who shaped his career to join him in Cape Town for four fabulous meals.

Nobody comes from nowhere, not even Luke Dale Roberts. The Test Kitchen has consistently collected top awards since it opened in November 2010, and is ranked 44th as well as the Best in Africa at the World’s 50 Best Restaurants Awards (sponsored by S.Pellegrino and Acqua Panna).

The Pot Luck Club, The Shortmarket Club, Commissary, and Salsify at The Roundhouse are all the offspring of the original and run by protégés of Dale Roberts, who have trained and learned with him. So the idea of mentorship had been in Dale Roberts’s mind for a while when he got an email from one of his own mentors, Kevin Hopgood, filled with compliments which had been notably absent in the kitchens of Dale Roberts’ youth. Reminiscing with his wife Sandalene about his early cheffing days, she suggested he fly Hopgood and Graham Garrett to South Africa to cook and “celebrate their journey together, to reconnect and inspire each other one more time”. Thus it came to pass that the event known as LDR Origins, The Mentors – A Trip Around The British Isles, was born.

“We started communicating a couple of months ago with the idea of a trip around the British Isles. We’re all Brits, two of us living overseas, so I thought it would be nice to do something grounding and wholesome and English-inspired,” explains Dale Roberts. “They sent me a list three or four snacks and three or four main dishes, and I chose the ones that would fit best with the dishes I had for myself.

“Then they sent recipes, and I worked with development chef Carla Schultz to make samples, of which we sent pictures back to them for approval. When they came over, we spent the whole day on January 2 working on the menu. On the 3rd, we did samples and then went straight into service.”

This was the first of two nine-course lunches and two 12-course dinners served on January 3 and 4, 2020. (The Test Kitchen is normally only open for dinner, which pushed the team above and beyond.) Each course was paired with exceptional wines from Ken Forrester (some from his private vault), AA Badenhorst, and Sadie Family Wines; teetotalers could pair with flavoured teas served in bubbly glasses so as not to feel left out of the fun. We began trying these alongside the wine, just for research purposes, but weren’t enjoying them. “That’s because you are also drinking wine, and the tannins are not working well together,” said sommelier Tinashe Nyamudoka, whose opinion and knowledge is highly valued.

We wisely ditched the tea after that, a solid life choice.

The experience began long before this, with snacks in the Dark Room, the antechamber and a prelude to the main event in the Light Room. It’s not a mere gimmick; there is a distinct physical sensation as you pass from one environment to the other.

Nibbles included truffle and foie gras sausage rolls, and cheese croquettes by Garrett; rabbit terrine with piccalilli, and crumpet with langoustine and brown butter by Hopgood. “I find both their foods very comforting,” said Dale Roberts, who created a “ploughman’s lunch”, a new dish, which future diners will encounter, and curls of pork scratchings with Guinness foam in a pewter tankard which is a “bit of a staple” at TTK.

In the Light Room, we were seated at the best table in the house, front and centre with a view of the kitchen and the pass. Even if you had no inkling of what goes into creating such a meal, the air was one of calm efficiency, which I mentioned privately to Dale Roberts.

“The thing about doing this kind of thing is it’s so hard; it’s a super-tough day and rolls straight into dinner service. You step outside your comfort zone and become inspired by the energy of the people around you,” he replied. “It’s a testament to my team in the kitchen and front of house. They are so professional that they are able to take on a new challenge like this and adapt.”

The multiple snacks counted as the first course. The meal continued with Tuna Tartare Sunday Roast. The fish was brought to us during its smoking phase for a bit of theatre (which remained understated throughout), and was served with horseradish cream and Yorkshire pudding tuile, and Sadie Family Wines Skerpion 2016 (Chenin Blanc and Palomino). Next up was Garrett’s butter-poached lobster with peas done several ways, including in their original and recognisable spherical form, and bisque foam. AA Badenhorst’s 2015 White accompanied, a complex blend of more than 10 varieties.

TTK Cottage Pie was an “extraction” of Sandalene Dale Roberts’s dish, with parmesan mash and slow-cooked (36 hours) Wagyu beef short rib. The wine was Sadie Family’s 2015 Treinspoor, a Tinta Barocca. Hopgood contributed the next course, an interpretation of a traditional Scottish soup, Cullen Skink, usually made with smoked haddock, potatoes and onions. Here it was poached kingklip with a leek heart, quail egg, langoustine oil on a fish veloute, and saffron potato. At this point, the Ken Forrester – a jollier and more unpretentious wine person you couldn’t meet – FMC came out, in a big bottle nogal. The FMC stands for “F***ing Marvellous Chenin. Go ahead, look it up. Okay, it has another meaning too, but the above is generally accepted and it’s what Forrester will tell you if you ask. It’s also an accurate description.

Garrett’s Duck & Cherries paired with AA Badenhorst’s Ramnasgras Cinsault 2017, a dish of duck which was first sous vide then pan-seared, with cherries as well as cherry jus, baby beets and chicken liver fondant. The final meat dish was Hopgood’s Steak & Oyster, another reinvention of an English classic. The beef fillet with parsley puree and chargrilled baby carrots was served with a braised beef cheek and oyster pie baked in the shell with golden puff pastry, and Ken Forrester’s Grenache Syrah 2001.

Who was responsible for this deliciousness, I asked Dale Roberts. “Test Kitchen,” he replied, again giving credit to the team.

“In this industry, there’s always mentorship happening at every level. People always think mentorship is about that one guy that helped form me as a human being or a chef, but the truth is it’s happening all the time,” said Dale Roberts in his speech after the first lunch. “I feel incredibly honoured to be working with a lot of people that are eager to have opportunities to work in the kitchen, and am so grateful to them.”

Unfortunately, Hopgood was laid low (as in hospital-serious) by a lurgy and wasn’t able to make it on the 3rd, but both mentors were in the kitchen the following day.

“These two guys influenced me more than anyone with my food and I look at Kevin as a bit of a father figure. He looked after me when I worked for him,” said Dale Roberts. “And Graham is one of the funniest people I know in the world. He’s such a joy to be with. Our collaboration was more than the sum of its parts, which is the essence of it.”

Graham is chef and proprietor of The West House in Biddenden, Kent, a multiple award-winning restaurant that focuses on seasonal ingredients. Dubbed “ruthlessly seasonal” by food writer Charles Campion, The West House continues to excel for, as Graham says, “when you work with the seasons, it practically writes the menu for you”.

“Being in a position to get together to cook with two of your best mates is a real privilege that I know will result in some amazing food, great laughs and a few new memories.

“I strongly believe that mentorship is the most important part of anyone’s career and regularly preach that fact… It fills me with immense pride when people that you’ve trained and believed in go on to their own success.”

Kevin is chef and proprietor of Hopgoods and Co. in Nelson, New Zealand, winning multiple awards in its 14-year tenure. Kevin’s passion lies in knowing the provenance of all his ingredients, a luxury he was rarely afforded in the large London markets he started out in, and ensuring only the finest quality produce is served at his tables.

“I was really excited when Luke came up with the idea of collaborating with myself and Graham… it is a great opportunity to see how Luke has progressed and become one of the world’s best chefs, and I can’t wait to see what the trainee can now teach the mentor.

“I love being able to give back to the industry that has given me so much, and mentoring is a great way to do that.” DM