A meeting of Two Brothers from Another Sea 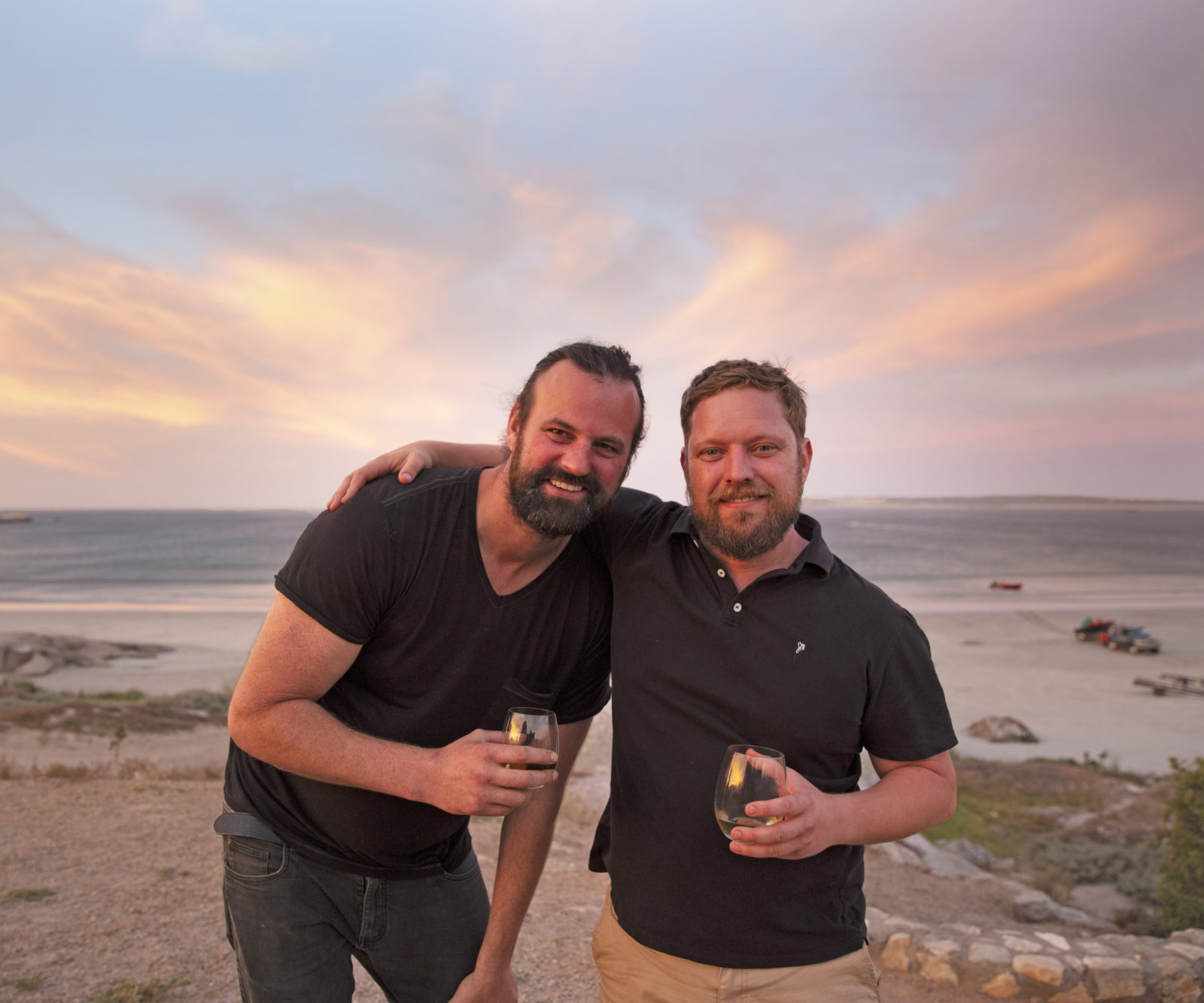 The sun goes down on the second successful collaboration of Two Brothers From Another Sea: Chefs Willem Hiele (left) and Kobus van der Merwe (right) at Wolfgat in Paternoster. Photo: Jac de Villiers

When the meal previously known as “lunch” involves semi-dazed kreef, shelled and minced into ceviche right before me on the beach, while Les Javan songs are soulfully sung by a village community choir led by the chef’s mother, and there’s a course called My Brother’s Cappuccino, a mere “lunch” has surpassed the entire category of meals… and transited into a magical place I want to inhabit forever.

This “lunch” was the chef collaboration called Two Brothers From Another Sea I experienced in Paternoster as 2019 wound to a close – with collaborators Kobus van der Merwe of the West Coast’s internationally lauded Wolfgat Restaurant and Willem Hiele of Belgium’s North Sea Coast Willem Hiele Restaurant and their teams. For a few hours I felt I was living their shared vision of relaxed coastal life, and that this is exactly how eating should always be: local, celebratory, fun, personal, grateful, conscious and rooted in identity.

It was a food-world matchmaker who brought Van der Merwe and Hiele together. The connection was sparked a couple of years after Belgian Alexandra Swenden, a creator of multidisciplinary performances linked with food, first ate at Wolfgat and was inspired by Van der Merwe’s approach. Swenden had just eaten at Willem Hiele, an even smaller restaurant than Van der Merwe’s 20-seater – in Koksijde, a coastal village near Ostend. Hiele, considered a rising star in Europe, won Gault-Millau’s Restaurant Philosophy Award in 2019. Van der Merwe describes the resulting exchange: “She sent me this message one night: ‘I just met your brother from another sea!’”

Swenden was struck by the similarities. Both chefs had small restaurants in old fishing cottages in historic coastal fishing communities, both foraged and focused exclusively on local ingredients iconic to their regions, and both were passionate about sharing their food heritage through culinary storytelling. “I couldn’t help but think that these two had found their profound and yet fragile life balance: being a creative chef in the most personal, connected, free and honest way, while protecting themselves from the siren call of the two ‘f’s: Fear and Fame,” she later explained in the programme for the two-part collaboration she and her Swenden Studio would go on to produce.

The seed had been planted. Not long after, Hiele and his wife and partner Shannah Zeebroek took a spontaneous holiday to South Africa. “We wanted to see him [Van der Merwe}, talk with him and taste his food first,” says Hiele. From the moment they arrived, he felt connected. They cooked simple home food together on a braai, made bread on the fire and immediately recognised that they had a common approach and similar ideas of foraging: sticking with what’s in season, and using fermentation and other preserving methods to extend these ingredients beyond their season. The mutual importance of identity was also undeniable. Van der Merwe’s was linked to Paternoster and the South African West Coast delicacies of bokkoms, sour figs and dune spinach, and Hiele’s to the Flemish North Sea coastline, where shrimp are still traditionally gathered by harvesters on horseback.

Hiele elaborates: “With some chefs, I see a lot of technique on the plate but no explosion or identity. That’s a big connection I had with Kobus.” They also discovered they both employ non-hierarchical styles of kitchen management, which creates a positive workspace that they believe their guests can feel.

In June 2019, Van der Merwe travelled to Belgium for Part One of the collaboration with friend and renowned South African Dutch chef Margot Janse. It was an experience of exploring what Hiele’s backyard and coastline had to offer. Van der Merwe was blown away by Hiele’s garden – with its wild asparagus, peas and fruit trees – on the plot where his family has lived for eight generations. The two cooked several meals together and the event was a success.

Six months later, Hiele and his team of four arrived in Paternoster to forage and cook two lunches and one dinner at Wolfgat, co-ordinated by Swenden and Cape Town food force Tamsin Snyman. I watched the chefs prep for the weekend: it was all easy banter, making a plan when 40-degrees heat altered their forage, and the joyful discovery of flavour combinations and what Hiele calls explosions: “I had the sense of rhubarb, but it’s because of the wild sage flowers, it does something amazing, rhubarb-like. I loved it!” This I heard Hiele animatedly say to Van der Merwe about the kombucha he’d tasted at Oep ve Koep that morning.

Purely by sight, the two chefs are an odd brotherhood. Hiele is dark-haired, a good few inches taller than Van der Merwe and more gregarious by nature. Van der Merwe is fair and quieter and perhaps a little less comfortable with being in the spotlight. But each knows who he is, and they are a force for flavour, texture and the people that matter to them. Two Brothers From Another Sea involved the entire community of Paternoster and surrounds, with fish from Lamberts Bay caught by fishers from Abalobi, the South African initiative empowering small-scale fishers that is Wolfgat’s supplier; kreef legally harvested by a Paternoster fisher, musical performances by chefs and grannies, and lodging provided by hosts and innkeepers.

The lunch I attended began at noon on Sunday at Oep ve Koep. Zeebroek greeted us with charm as effusive as the Swartland bubbles she was pouring. Responsible for the wine list at Willem Hiele, she had chosen the wines to complement the meal from a large selection van Der Merwe had ordered. As we stood on the shady terrace, we had our first of many bites: a fish taco from another world with Abalobi-caught Cape bream, cucumber and watermelon folded in a chilled sour soutslaai leaf, an oyster topped with basil and gooseberry, and the croquettes I’d watched the Wolfgat crew form by hand earlier on the Wolfgat stoep: fried balls of tea-smoked angelfish and heerenboon, the South African heirloom bean, served with a Cape sour fig mayonnaise.

Leaving Oep ve Koep, we walked behind Van der Merwe’s team like minions, as they sang their way through the town and down onto the beach. A table of green mocktails awaited – alcohol is prohibited on the beach – chilled cucumber juice with sea fennel, sea celery and a kapokbos-speared soutslaai-flower. The following course was The Fisherman That Came Out of the Sea. We sucked and swallowed limpets with red pepper, mushroom and wild garlic; an extraordinary black mussel with avocado and dune celery and raw crayfish tartare, bright with sea herbs and lime.

Directed up a sandy path, we experienced A Passage Between Two Worlds outside Wolfgat’s front door: a bite-size Nordic South African surf and turf marriage of oyster to springbok, nestled in an oyster shell. We crossed the threshold into the restaurant to a moody acoustic serenade on keyboard and African drum, played by Van der Merwe and Hughes.

A cabbage-wrapped roti filled with wild garlic masala tjokka and sambals fed our bodies but the voices of The Golden Oldies choir, a group of 22 Paternoster pensioners, under the direction of Van der Merwe’s mother, fed our souls. With permission from the songwriter, Sanita van der Merwe arranged several Les Javan songs in three parts for the choir, which is part of a community project called the Paternoster People’s Partnership. Seated at the piano (with her son as page-turner), Van der Merwe led the singing of Veilig in die Here by die Bergrivier se wal, My hart wil hier kom bly and Met Jou Aan My Sy. There were few dry eyes in the house. “Some of the choir members are the grandmothers of kids who work in Kobus’s restaurants and they are so proud of the success of Wolfgat,” Sanita added.

Wines from the Swartland region accompanied every course – with characteristically whimsical names like I Wish I Was A Ninja. One of my favourite dishes was My Brother’s Cappuccino, a play on a signature dish at Willem Hiele. In June, when Hiele prepared his celebrated bisque made with traditionally harvested shrimp, Van der Merwe could only take in the aroma: he is allergic to crustaceans. In Paternoster, the bisque was prepared with steamed white mussels, and served with bokkom butter, sourdough bread and a rooibos cream. It was the most delicious mopping-up dish I’ve ever eaten.

The course called Seafire was an ode to cooking over an open fire, a passion of both chefs. Jacopever – a shallow coastal water fish with a new lease on life due to Abalobi’s reframing of the underfished and underappreciated species – was wrapped in soaked hessian coffee bags (a technique of Hiele’s) and cooked on a Weber. The result was an extraordinarily succulent smoky, juicy, steamed fish, served on a light pool of green.

The only meat course was The Lamb Has Landed, a Greek-like phyllo-wrapped pie of tender0beyond-words Verlorenvlei lamb with koppiesveld mushrooms, served with a chutney-like date, orange and whiskey sauce. We ended the meal with two desserts: pineapple sorbet with wild sage and buchu, buttermilk rusk crumbs and amasi; and, of course, a Belgian waffle, topped with Kobus’s mother’s marmalade and lemoenboegoe.

There was so much of value to experience beyond the food and drinks. The happy and tired faces of the chefs. The view, which makes you feel you’re on holiday, even if you’re not. The togetherness of the event and the complex power of food.

Prior to the weekend, Hiele’s young Belgian chefs spent an eye-opening two days in Grassy Park with an old friend of his (14 years ago, Hiele, who is a passionate surfer, had done a six-month tour of the South African coastline and has kept in touch with many of the friends he made). He also met Serge Raemaekers, founder of Abalobi, and the two talked about bringing a delegation of North Sea Chefs to South Africa to learn more. The community of Paternoster was part of something much bigger, embraced by the larger gastronomic universe. And Van der Merwe, fuelled by the stimulation and inspiration of collaboration, is talking about engineering more exchanges between African chefs. “This is a practice round for what will happen in the future,” he told me.

Long after I left late that Sunday afternoon, the chefs, servers, guests and villagers drank and sang, and ate the lamb that was braaied for the entire community.

The best collaborations involve many more than four hands. DM